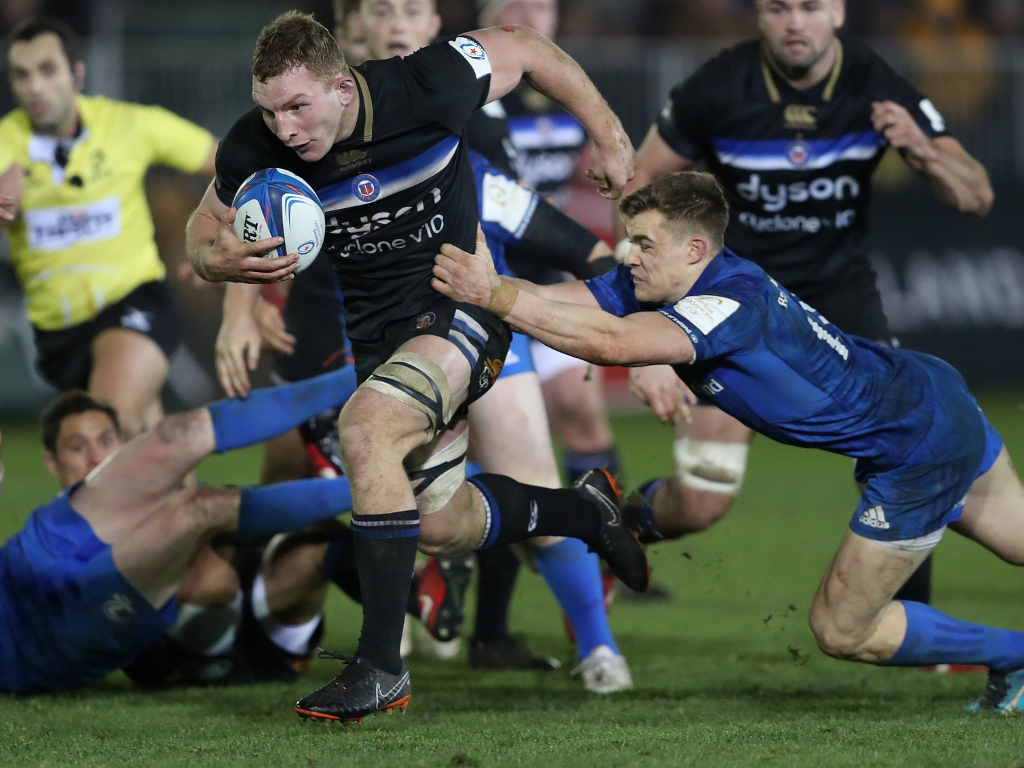 Six matches are on the Champions Cup schedule on Saturday and the action kicks off with Bath hosting Ulster at the Recreation Ground while Glasgow Warriors host Sale Sharks at Scotstoun.

England internationals Jonathan Joseph, Ruaridh McConnochie and Sam Underhill return to the Bath starting line-up for their Champions Cup opener against Ulster at the Rec.

The trio will pull on the Blue, Black and White for the first time since helping England to the Rugby World Cup Final in Japan.

McConnochie takes his place on the left wing, with Semesa Rokoduguni on the opposite flank and Freddie Burns continuing at full-back.

Joseph comes in at outside centre alongside Jamie Roberts, in an experienced midfield partnership.

In the half-back pairing, Rhys Priestland will once again link-up with Will Chudley, who was a try scorer in last weekend’s victory over Northampton Saints.

Beno Obano, Tom Dunn and Will Stuart will look to back-up their impressive showing last time out at the Rec in the front-row, with Charlie Ewels captaining the side at lock. Josh McNally partners Ewels in the second-row.

Mike Williams returns to the back-row at blindside flanker, with Underhill and Zach Mercer at openside and number eight respectively.

Meanwhile, Iain Henderson returns from international duty and will lead out the Ulster men for the first time since being named club captain. He is one of four changes to the team that recorded a narrow loss to interprovincial rivals Munster at Thomond Park last week.

Will Addison comes back into the full-back position, joining last week’s starting wingers, Jacob Stockdale and Rob Lyttle in the back three. Stuart McCloskey and Luke Marshall will retain their midfield partnership. In the half-backs, Billy Burns returns to take the fly-half position and will play against his brother, Freddie, in this game. Burns will once again pair up with John Cooney at scrum-half.

The front-row remains unchanged from the Munster game last week. Jack McGrath will pack down at loosehead, Rob Herring at hooker and Marty Moore at tighthead.

Henderson is partnered in the engine room for the first time with summer signing Sam Carter. Matthew Rea returns to blindside flanker, while Jordi Murphy retains the openside position, and Marcell Coetzee comes back to the base of the pack at number eight.

Forward replacements include Adam McBurney, Eric O’Sullivan, Tom O’Toole, Alan O’Connor and Sean Reidy. In the backline reinforcements, David Shanahan is set to make his 50th appearance for Ulster and is joined by Angus Curtis and Louis Ludik.

TEAM NEWS | Here it is #SharksFamily… Your first @ChampionsCup teamsheet of the season!

Ratu Tagive will make his first start in European competition this weekend, as Glasgow Warriors welcome Sale Sharks to Scotstoun.

A squad containing 19 internationals will welcome the English outfit to Glasgow on Saturday, with a total of 1,933 club appearances amongst the matchday 23.

A settled front-row sees Oli Kebble and Zander Fagerson continue as the starting props, as Fraser Brown packs down at hooker following the announcement of his new three-year contract earlier this week.

After being rested for last weekend’s trip to Parma, the club’s most-capped player Rob Harley returns to the side to partner Scott Cummings in the second-row.

Callum Gibbins and Ryan Wilson start together on the flanks for the first time this season, with Matt Fagerson continuing at number eight to complete the back-row.

George Horne will look to build upon his brace of tries against Zebre last Saturday, with the scrum-half once again partnering Adam Hastings in the half-backs.

Nick Grigg comes back into the side at outside centre, lining up outside fellow Scotland international Sam Johnson in midfield.

Tommy Seymour continues at full-back in an unchanged back-three, with DTH van der Merwe and Tagive starting on the wings. Ali Price is in line to make his first appearance of the new season from the bench, following the foot injury sustained by the scrum-half at the recent Rugby World Cup in Japan.

Pete Horne returns from injury into the matchday squad, whilst Tim Swinson, Chris Fusaro and Kyle Steyn move to the bench to accommodate the returning Harley, Gibbins and Grigg respectively.

The front-row replacements once again retain their jerseys, with George Turner, Alex Allan and D’arcy Rae each primed to make an impact from the bench.

Meanwhile, European Rugby’s all-time top try scorer Chris Ashton is set to return as the experienced winger is included in the Sharks squad for the first time since Round One of this season’s Premiership.

There are five other changes to the Sale side that downed Wasps at the AJ Bell Stadium last Friday. Rob Webber and Jake Cooper-Woolley return to the front-row in place of Akker van der Merwe and Coenie Oosthuizen as Steve Diamond continues to rotate his front-row options throughout the season.

Bryn Evans captains the team from second-row alongside James Phillips who returns to the starting line-up in the absence of Josh Beaumont, who was seriously injured during the Sharks’ Premiership Round Four match with Wasps. Jean-Luc du Preez starts at blindside flanker with twin brother Daniel at number eight and the Springbok internationals are joined in the back-row by Ben Curry.

Embrose Papier starts at scrum-half and will pair up with AJ MacGinty, who is included in the Sharks starting line-up for the first time since returning from international duty with the USA at the Rugby World Cup.

Byron McGuigan returns to Scotland in a rich vein of form and will be looking to make an impact against his former club. He keeps his place in an unchanged back three with the only change to the Sharks back-line being the inclusion of Luke James at inside centre in place of Rohan Janse van Rensburg.

Van der Merwe, Oosthuizen, Valery Morozov, Matt Postlethwaite and Jono Ross are all included as replacement forwards, along with Will Cliff, Rob du Preez and Ashton in the backs.

Leinster head coach Leo Cullen has named his matchday squad for their Champions Cup opener against Benetton Rugby at the RDS Arena.

Similar to last week’s win away to Connacht, Cullen has again brought a number of Ireland internationals back in for the first time this season, with a number of those that have starred in the first six weekends of the season also retained.

At full-back Jordan Larmour is in for his first game in blue of the season, with Dave Kearney on the right wing and James Lowe on the left.

Joe Tomane is selected in the 12 jersey, with Garry Ringrose another involved for the first time this season outside him.

Scrum-half Luke McGrath starts for the second week in a row with club captain Johnny Sexton making his seasonal bow at 10.

In the pack, Cian Healy starts again this week with Andrew Porter also selected to start from tighthead. Rónan Kelleher has been rewarded for an excellent start to the season with a European debut at hooker.

Devin Toner is joined in the second-row by another one of the returning Irish contingent, James Ryan.

In the back-row, Rhys Ruddock starts this week having been amongst the replacements last weekend, with Josh van der Flier on the openside for his first involvement of the season. Finally, former Ireland U20s captain Caelan Doris makes his first start in Europe from number eight.

Meanwhile, inside centre Alberto Sgarbi captains Benetton and he is joined in midfield by Nacho Brex with Ian Keatley and Dewaldt Duvenage the half-back pairing.

Jayden Hayward starts at full-back while Angelo Esposito and Luca Sperandio are the two wings.

Tongan international Nasi Manu starts at number eight for Benetton and he is joined in the back-row by Italy representative Braam Steyn and Giovanni Pettinelli while Dean Budd and Irne Herbst are the starting locks.

The front-row comprises Hame Faiva (hooker) while Marco Riccioni and Nicola Quaglio are the props.

Former All Black Victor Vito captains the French outfit from number eight and is joined in the back-row by Wiaan Liebenberg and Grégory Alldrit.

The rest of the pack sees Mathieu Tanguy and Romain Sazy lining up as the starting locks while Pierre Bourgarit packs down at hooker and Arthur Joly and Dany Priso are the two props.

In the backline, Ihaia West and Alexi Bales are the half-backs with Geoffrey Doumayrou and Levani Boti starting in midfield while Jérémy Sinzelle (full-back) starts in the back three alongside wingers Vincent Rattez and Arthur Retiere.

In the pack, Dave Dennis and Dave Ewers come in for Jannes Kirsten and Matt Kvesic, whilst behind Ian Whitten – a try-scorer the last time the two sides played – comes into the centre in place of Sam Hill.

On the bench, England prop Ben Moon returns for the first time in a fortnight, whilst fellow internationals Luke Cowan-Dickie, Don Armand and Jack Nowell also figure as they look to build up some much-needed game time with the club.

Experienced scrum-half Morgan Parra captains Les Jaunards while Camille Lopez starts alongside him at fly-half while All Blacks duo George Moala and Isaia Toeava are the midfield combination.

Peter Betham and Alivereti Raka are the two wings and Nick Abendanon (full-back) completes the back three.

In the forwards, Fritz Lee packs down at number eight with Alexandre Fischer and Peceli Yato starting on the flanks while Sitaleki Timani and Paul Jedrasiak are the lock pairing.

In the front-row, John Ulugia starts at hooker with Rabah Slimani and Etienne Falgoux occupying the prop berths.

Meanwhile, Harlequins have received a shot in the arm after two England internationals were included in their run-on side for this fixture.

The squad to lead Quins in their first Champions Cup fixture since the 2017/2018 season sees the return of both Danny Care and Mike Brown from injuries.

Scrum-half Care will be making his first start of the 2019/20 campaign in the side led by club captain Chris Robshaw, who will be joined in the back-row by Will Evans and Tom Lawday.

Ospreys head coach Allen Clarke has named his squad that will take to the field against Munster in the Champions Cup.

There’s a welcome boost on the bench this week, with three Welsh internationals returning for regional duty.

There’s just one change in the backline from last week’s line-up with Tom Williams given a starting position ahead of Lesley Klim on the left wing. Cai Evans runs out at full-back and Dirksen is named on the other wing.

19-year-old Tiaan Thomas-Wheeler starts his sixth game in the midfield alongside Scott Williams, while Shaun Venter will be distributing at scrum-half to Luke Price outside him.

Scott Otten gets an opportunity in the front-row, packing down at hooker between Rhodri Jones and Ma’afu Fia at loosehead and tighthead respectively. Springbok Marvin Orie gets his third start in the second-row alongside Ospreys stalwart, Lloyd Ashley. Captain Dan Lydiate, Olly Cracknell and Morgan Morris form an unchanged back-row.

There are some familiar names on the bench this week, as prop Nicky Smith, lock Bradley Davies and scrum-half Aled Davies return from their Rugby World Cup exploits in Japan to give the squad a boost.

Meanwhile, Munster head coach Johann van Graan has made five changes to his side that defeated Ulster in the PRO14 last week.

Mike Haley starts at full-back with last week’s match-winner Andrew Conway and Earls on either wing.

Rory Scannell and Chris Farrell continue their centre partnership with Murray and Bleyendaal in the half-backs.

Loughman, Niall Scannell and John Ryan pack down in the front-row with Loughman making his first Champions Cup start.

Jean Kleyn and Billy Holland start in the engine room with captain Peter O’Mahony, O’Donnell and CJ Stander completing the side.

Tadhg Beirne is named among the replacements and is in line to make his first Munster appearance of the season.