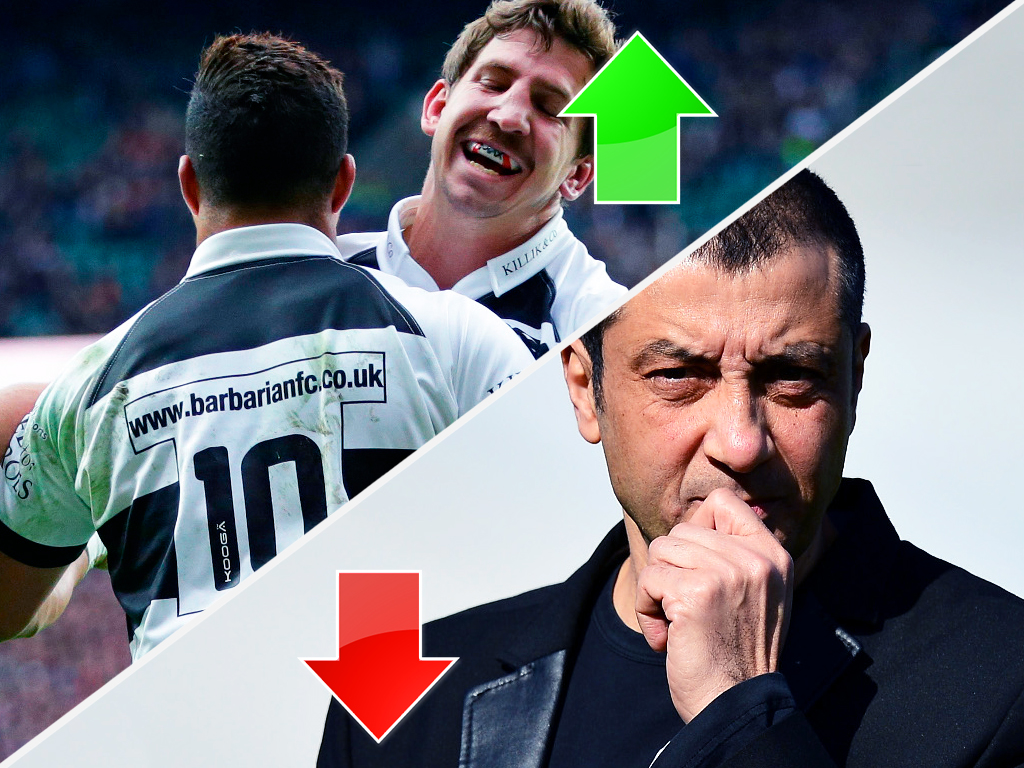 Kwagga Smith and Steven Luatua: What a performance from the back-row duo as they wowed the Twickenham crowd in Barbarians colours against New Zealand. Smith was everywhere as the open nature of the game played right into his Sevens strengths. He relished the atmosphere and combined brilliantly with Luatua who was equally as busy in the open field. Both were unlucky to finish on the losing side.

Niko Matawalu: One metre from his own try-line, Matawalu set off on a brilliant run that saw him outpace and then step around Leinster’s flailing defenders before finding Nick Grigg for the finish. He probably could have got there himself and despite his name not being on Glasgow’s scoresheet, this win over Leinster will be remembered for Matawalu’s performance. Rightly picked up the man-of-the-match award.

NIKO MATAWALUUUUU! @NMatawalu goes almost the length of the park before handing over to Nick Grigg! 24mins and a bonus for @GlasgowWarriors! pic.twitter.com/PEfCdOPWCk

Munster: In boss Rassie Erasmus’ final game in charge before he heads back to South Africa to take up his new role, his players gave him the perfect send-off on Friday against the Dragons. Munster were rampant in the second-half as they finished with seven tries in the 49-6 win. What Erasmus did under such difficult circumstances last season was a credit to him, his coaches and players. He told the Irish Examiner after their win: “I have definitely enjoyed my time here. This has been the best 18 months of my life, not just in rugby. I have learned so much from Irish people. I’ll treasure these days for the rest of my life. And the performance was wonderful to sign off with.”

Canadian audience: Packed for its World Sevens Series leg and on Friday 29,480 fans turned out at BC Place for Canada’s match against the Maori All Blacks. Despite Canada being without several first-team players, that’s the country’s biggest ever crowd for a XVs fixture and proves there’s a demand to watch the sport. As you can see by the below video, it’s an ideal venue for sport and the fans lapped up the occasion.

South Africa: Have one hand on the hosting rights for Rugby World Cup 2023 after being unanimously recommended to the World Rugby Council by the Rugby World Cup Limited Board. The World Rugby Council will now meet on November 15 in London to consider this recommendation and vote on the next host. A surprise decision in some quarters but South Africa will be feeling quietly confident now of finishing the job.

Wallabies: They are building very nicely indeed two years out from a World Cup. On the back of the victory over the All Blacks, Australia thumped Japan on Saturday, with Tevita Kuridrani grabbing a hat-trick. While the Brave Blossoms didn’t put up a great fight, the Wallabies ticked plenty of boxes and are definitely heading in the right direction. Reece Hodge was solid at fly-half while Samu Kerevi also pressed his case for more game time.

Ospreys: Crumbled in the second period against Edinburgh as they lost 37-10 on Saturday. That is the struggling Welsh region’s sixth PRO14 loss in eight games as they go into the break for Anglo-Welsh Cup rugby desperately needing confidence boosting wins. They did not score a point in the second-half as Edinburgh ran away with things at Myreside. Congratulations to Edinburgh though who picked up their fifth win.

Toulon: Where to start? A backline that included All Blacks Malakai Fekitoa, Ma’a Nonu and Luke McAlister, quality finishers in England’s Chris Ashton and Fiji duo Semi Radradra and Josua Tuisova and a pack consisting of the likes of Duane Vermeulen, Mamuka Gorgodze and Samu Manoa was beaten by struggling Agen on Saturday. Toulon were a side short on ideas and more importantly Agen appeared to want it more and that has upset boss Mourad Boudjellal, who pointed the finger at his forwards in the post-match. We feel though their problems run deeper.

RWC 2023 fallout: Following on from South Africa celebrating the recommendation to host the 2023 global showpiece, the reaction from both Jurie Roux and Bernard Laporte has brought out the popcorn. First Roux publicly urged France and Ireland via the media to “take the moral high ground”, which was an unnecessary comment to make, and following that, Laporte slammed the RWCL’s decision. That prompted World Rugby to release a statement calling for calm, saying Laporte’s comments were “unfounded and inaccurate”. This may rumble on until November 15.

Bordeaux-Bègles and Oyonnax: 24-3 up, UBB suffered a 38-37 defeat at Toulouse on Saturday in a result they will still be scratching their heads over. Had they won they would’ve gone fifth in the Top 14 before the break but instead sit seventh. Meanwhile, Oyonnax’s atrocious form continued as they succumbed to yet another loss after going down 32-19 to Castres. Adrien Buononato’s men have struggled this season with their last – and only – win coming in round three against Agen and with the aforementioned side and Brive winning, Oyonnax now sit bottom.