Home Who's hot and who's not Who’s hot and who’s not: Southern hemisphere dominates the north, lock scrap and lacking respect for a legend 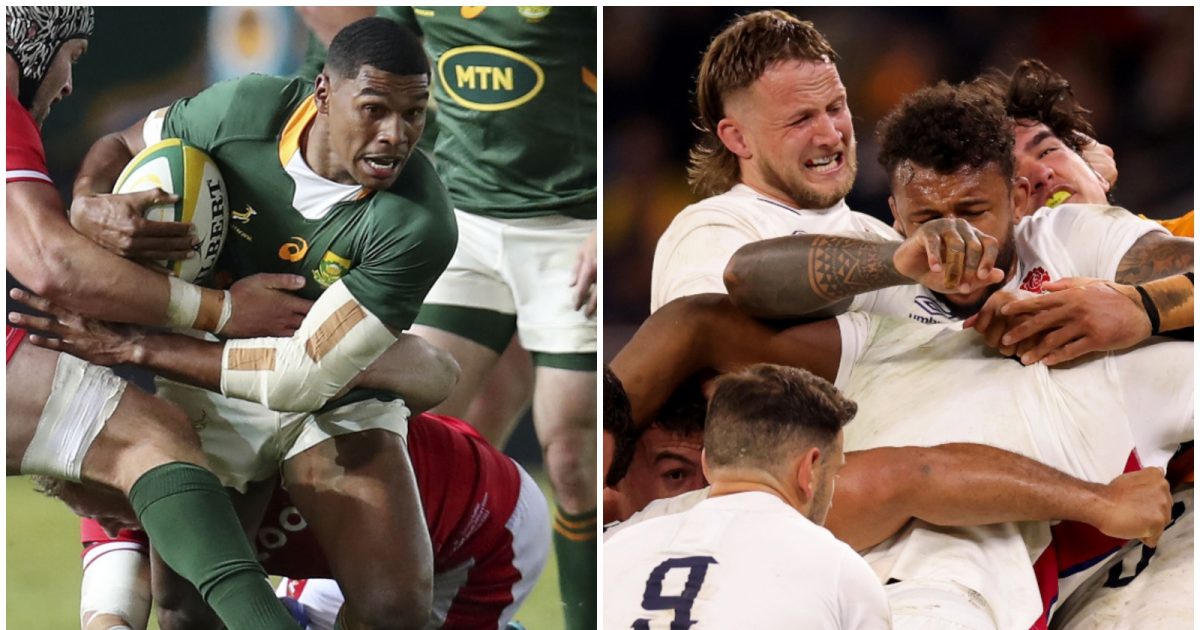 Ruthless All Blacks: After suffering their third defeat in five matches against Ireland in Dublin last year, the men in black were on a mission at Eden Park in Auckland on Saturday. Despite being without most of their coaching staff and some players in the build-up to the Test – due to a Covid-19 outbreak in their camp – the All Blacks delivered a clinical performance as they dominated their opponents in most facets of play en route to a convincing 42-19 triumph. Although it was a superb all-round display, the likes of Ardie Savea, Aaron Smith and Scott Barrett caught the eye with outstanding individual efforts. The result means New Zealand stretch their remarkable winning record at Eden Park to 47 matches and they are unbeaten at the venue since 1994.

Spirited and smart Wallabies: The odds were stacked against them when a poor first half display was compounded by Darcy Swain’s red card. They did well to stay in contention at the break but England were very much favourites going into the final 40 minutes. However, the hosts lifted their game significantly, particularly in the final quarter and started to physically get on top. Samu Kerevi was especially magnificent by continually shoving defenders out of the way and it allowed Australia to build pressure. Dave Rennie’s men also adapted well and played smartly, becoming more direct and to a degree taking on the tourists at their own game. A very impressive result.

Samu leg drives all the way to the line and the Wallabies crowd goes wild! 🥳 #AUSvENG pic.twitter.com/vSaQymBBn3

Damian Willemse wins it for South Africa: The Stormers player was seen as a surprise inclusion but, after switching from full-back to fly-half in the second period, he more than justified his selection. Willemse wasn’t playing badly at all in the first half but he seemed to thrive when given more responsibility following Elton Jantjies’ withdrawal. The playmaker dictated play well from the pivot position, kicked his goals and of course scored the decisive penalty when the clock went into the red. Willemse is a talented player who went a step towards realising his potential on Saturday.

The composure from Damian Willemse. 👏pic.twitter.com/UIR48m5Y1J

Debut delight for Michael Cheika: First game in charge of Argentina and a first win for the former Australia head coach. Given their struggles over recent years, there is plenty of pressure on Cheika to turn things around and the signs are positive. Despite Scotland’s comeback, which saw Gregor Townsend’s men score two quick-fire tries to level matters at 18-18, Los Pumas were the better side for the other 70 minutes. Their set-piece was strong and they looked threatening in attack, but Argentina just need to cut out the errors in crucial moments. If they can then the South Americans will win this series comfortably and then could be competitive in the upcoming Rugby Championship.

Rapid back to front stuff and Argentina have a second try in a matter of minutes! 🇦🇷#ARGVSCO pic.twitter.com/EMvMp3mLnZ

Good PNC starts for Samoa and Fiji: Both these Pacific Island nations produced excellent performances to open their Pacific Nations Cup campaign on a winning note. Fiji were outstanding, overcoming Tonga 36-0, while Samoa defeated a strong Australia A team 31-26. Both these sides have seen their players feature in the recent inaugural Super Rugby Pacific season and that possibly showed on Saturday. It is too early to say for certain the affect that will have on those countries in the short and long-term, but it was interesting to witness how cohesive Fiji and Samoa looked.

England struggle against 14 men once again: After the Barbarians overcame the loss of Will Skelton to utterly smash a second-string Red Rose side, the first team also failed to benefit from having an extra man. England controlled much of the first half but it was hardly awe-inspiring rugby and they duly failed to put their opponents away when on the front foot. Eddie Jones’ men then folded in the final quarter, much like they did against the Baa-Baas, which must be a huge concern for the head coach. Jones’ charges were as stagnant in attack as they were in the Six Nations and also struggled defensively when the Wallabies got into their half. Quite simply, England are not making any progress at the moment.

That was some collapse from England, who lose to 14 men in very different circumstances for the second consecutive game

Injury-ravaged Wallabies superb in the second half & deserved the win.

Concerns for Ireland after successive defeats: Most, quite rightly to be fair, shrugged off the heavy defeat to the Maori All Blacks but it perhaps hinted at what was to come at Eden Park on Saturday. Despite a positive start, it unravelled rather quickly as they became ragged and made far too many mistakes, both defensively and with ball in hand. The All Blacks, in typical fashion, capitalised and at half-time the match was over. If anything, Ireland seemed to struggle with the pace of the game and were not organised quickly enough when in phase play. It led to them losing their structures and making errors in attack. Certainly something they need to work on for next week.

Darcy Swain and Jonny Hill: Although the Wallabies were deserved winners in Perth, Swain’s moment of madness should not be forgotten and would easily have cost a lesser team the match. The Brumbies second-row fell into the trap when Jonny Hill was goading him – by pulling his hair – and reacted by headbutting his opponent in the 34th minute. Australia put that setback behind them and came back strongly in the second half to seal the win but Swain’s petulant reaction means he is will have the book thrown at him. Hill must not be excused either having pushed the Aussie lock in the face earlier in the match, which probably led to the fracas later in the half. Neither player came out of this encounter well.

A scuffle with MAJOR implications for both teams. 😳

Former All Blacks and Wallabies can’t reverse Tonga fortunes: There was much fanfare over the inclusion of Israel Folau, Malakai Fekitoa and Charles Piutau – two former All Blacks and an ex-Wallaby – but that trio didn’t make an impact as they were dismantled by Fiji in the Pacific Nations Cup. It was a very disappointing display and for Folau in particular it was a pretty abysmal day, lasting just 20 minutes before going off with injury. It shows that more than individual talent is needed if they are to improve and become competitive at the highest level.

Disrespectful South African supporters: We don’t always like the whole ‘rugby values’ mantra as at times it appears rather hypocritical, especially when you consider matters such as ‘bloodgate’ and Saracens’ salary cap scandal, but generally the sport’s fan-base is exceptionally respectful. That, however, was not the case before South Africa’s game with Wales on Saturday. Prior to the match, a tribute was organised to remember the legendary Wales fly-half Phil Bennett, who sadly passed last month, but it was not well observed by the Springbok supporters. They were heard chatting and laughing through it, which quite frankly is not acceptable.

#SAvWal I have rarely seen such blatent disrespect as shown by the Pretoria crowd and @Springboks support yakking and chatting through a minute’s silence for the greatest player ever to tour their country, the exquisite #PhilBennett