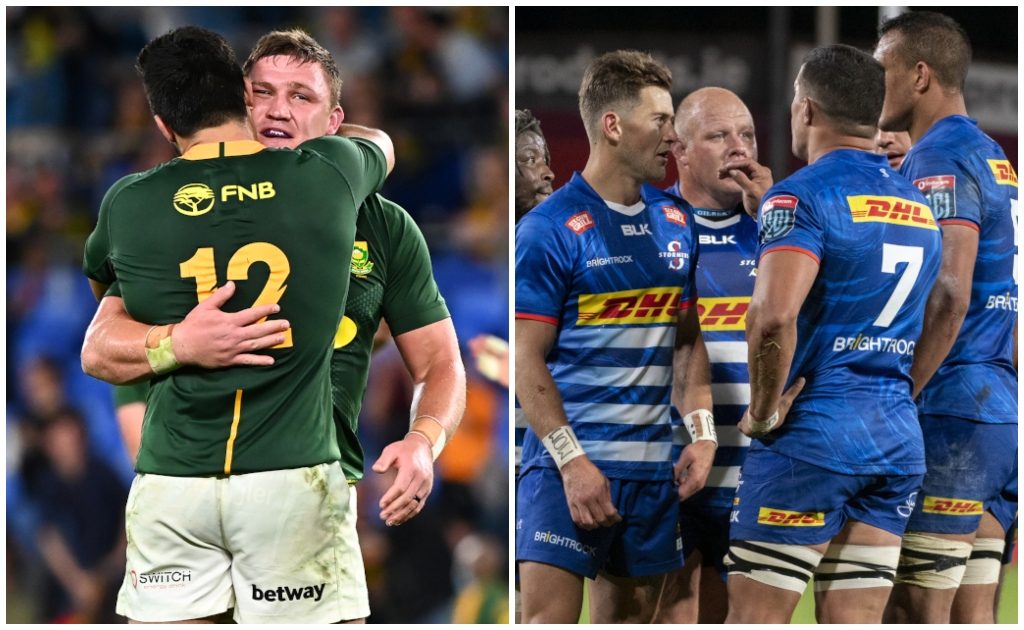 South Africa v New Zealand thriller: Well done to both teams for producing such a pulsating Rugby Championship game on Saturday. Although last weekend’s match had an exciting ending, it wasn’t the most thrilling of matches. This, however, was enthralling throughout as the respective sides improved significantly on the Round Five encounter. It was much more like it from the Springboks, who finally displayed a bit more ambition with the ball and were rewarded as a result. The All Blacks also showed developments in this fixture, scoring one of the tries of the year via Ardie Savea, but ultimately the world champions were just slightly too good on the day. What a great showdown it was.

Australia’s resurgence continues: Things continue to get better for Australian rugby after they produced another comprehensive performance against Argentina. Once again they were far too good for Los Pumas and secured their fourth consecutive victory to finish in second place in the Rugby Championship table. Dave Rennie has brought back a couple of players in the shape of Quade Cooper and Samu Kerevi, who have transformed their attack, and that duo’s composure and all-round excellence has rubbed off on the rest of the side. Bravo.

The @wallabies continued their solid recent form, ending their Rugby Championship campaign with victory over @lospumas, a fourth win on the bounce.#RugbyChampionship #TRC2021 #ARGvAUS pic.twitter.com/j0Vy0Rj40z

East Midlands rivals sitting pretty: Leicester Tigers and Northampton Saints currently sit atop of the Premiership table after securing three successive victories at the start of the new season. They have both been impressive, with the Tigers in particular looking like genuine top-four challengers. Steve Borthwick has done an outstanding job to revitalise a club which had been struggling and they displayed their credentials by overcoming Saracens 13-12 on Saturday. Although it wasn’t a great performance, they showed plenty of spirit to snatch the victory with the last action of the game. They’re joined by arch rivals the Saints at the summit, a team that also had to battle for a triumph. After initially opening up a comfortable 17-0 buffer against London Irish, Northampton then found themselves 21-20 down before fly-half Dan Biggar’s late penalty kept up their momentum. There is a long way to go but these two great clubs could well be in the mix for the title.

Clock in the red, @LeicesterTigers are awarded a penalty try and beat Saracens by a single point! 🐯

Leonardo Marin: The 19-year-old, who only made his debut for Benetton in Round One of the United Rugby Championship, has firmly established himself in the first-team squad after his exploits on Saturday against Edinburgh. With his team trailing 27-25 as time wore on, replacement Marin sat back to nail an 85th minute drop-goal that sparked jubilant scenes at Stadio Monigo. The youngster had also landed one penalty and a conversion since his introduction but it was the drop late on that will have given him massive confidence moving forward.

Moana Pasifika stadium decision: We have expressed concerns previously over what this team will shape up to be and whether it will indeed help Pacific Island rugby, and the latest news hasn’t exactly allayed those worries. We could very much understand playing in New Zealand for next season – and possibly even 2023 – due to travel issues caused by Covid, but to ink a deal until 2028 to play in Auckland is disappointing. Fijian Drua, the other new Island franchise, has stated their intention to play in Fiji after the 2022 campaign, yet the natives from Samoa and Tonga won’t get to see their team play live for potentially another eight years. What a shame for them and the competition.

🗣️ “We can’t wait to welcome fans to our new home, their fale.”

🇼🇸🇹🇴 Moana Pasifika to be based at Mt Smart Stadium. 👇 https://t.co/KCmSxUSrKA

Argentina’s Covid breach: After they garnered much sympathy for being shafted by SANZAAR, Rugby Australia and the other Rugby Championship nations a week ago, that goodwill rather dissipated when six players and two members of staff – including former captain Pablo Matera – broke Covid regulations. They crossed the border into New South Wales without permission which resulted in them being forced to quarantine, leaving them stranded ahead of Saturday’s game. It’s been really tough on the Argentinians for the past two years in terms of the Jaguares and their form in the Rugby Championship, so for these eight squad members to let the side down was disappointing.

Confirmation from @lospumas of 6 players, 2 staff caught across the NSW/QLD border after day trip to Byron Bay, yday. Front line players Pablo Matera, Santiago Medrano & Santiago Socino among the group. Capt Julian Montoya WAS NOT with them. | @9NewsQueensland @RugbyOnNine @wwos

South African franchises: It hasn’t been a great start to life in the United Rugby Championship for the four South African franchises. Just one win picked up in their opening eight games makes for horrible reading for the Bulls, Lions, Sharks and Stormers, with the second round of action seeing all four teams on the receiving end of defeats. Yes, they’re missing a handful of players who are on duty in the Rugby Championship and might be tired following a long season, but surely a better return was expected even at this early stage of the campaign.

Why have the South African teams failed to hit the ground running in the URC? @BobSkinstad outlines some of the potential reasons 🇿🇦

"The COVID-induced changes to the domestic tournaments in South Africa have meant that these guys have been playing rugby for 14 months." 🗣️ pic.twitter.com/VJOsBX7OFW

Injury blow for Semi Radradra: It’s a setback not just for the player and Bristol Bears but also Premiership rugby fans who know what a talent Radradra is. The sidelining of the Fijian superstar for an anticipated four months will cut the Bears deep and the English top flight will be a poorer place because of his absence. Bristol director of rugby Pat Lam revealed the Fiji centre is set to undergo knee surgery on Monday after sustaining the injury during his country’s victorious campaign at the 2021 Olympic Sevens in Tokyo. Good luck in your recovery, Semi.

🗣️ "We are looking at him having surgery on Monday, and he will end up with probably 16 weeks (out). It was in the semi-final in the Olympics."