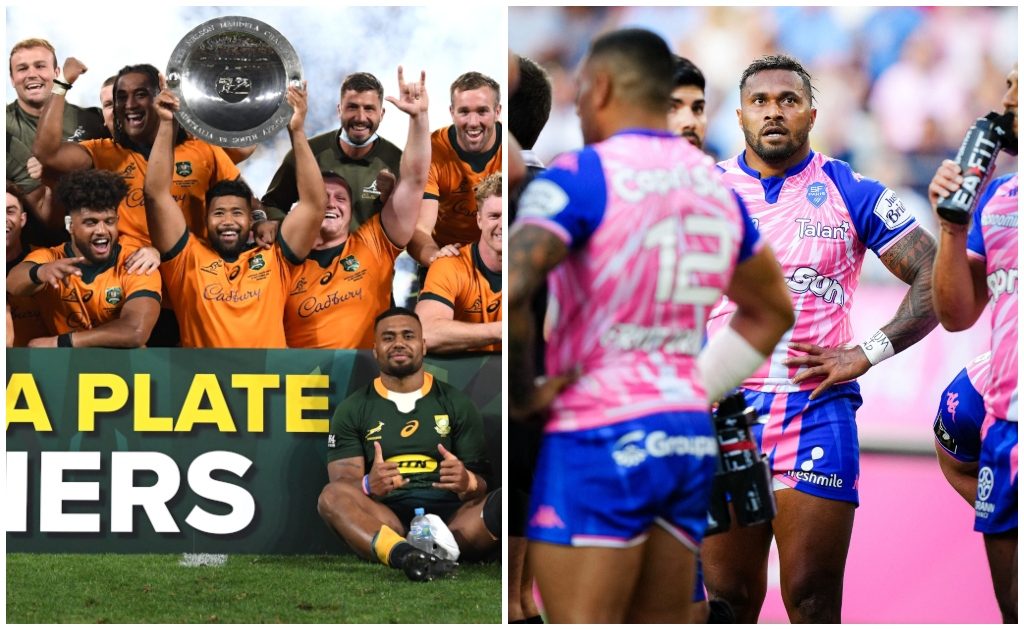 Wallabies: Australia’s Rugby Championship revival continues as after edging out South Africa on the Gold Coast in Round Three, they delivered a more polished performance in Saturday’s 30-17 win over the Springboks in Brisbane. Although the entire side deserves credit, Taniela Tupou, Marika Koroibete and Michael Hooper earn special praise after outstanding individual performances. Tupou capped a fine all-round display with a superb offload for the first of Koroibete’s two tries and Hooper led from the front in his 60th Test as skipper, which is a record for the Wallabies. Australia’s victory was a momentous result as it is the first time since Dave Rennie took charge of the side that they have won two matches in a row and they will fancy their chances of continuing in that vein against Argentina over the next two weeks.

Pat Lam’s new deal: Bristol Bears are one of the most improved teams in the Premiership and since Lam took over the coaching reins at the West Country outfit, in 2017, the club has gone from strength-to-strength. It is therefore not a surprise that Bristol’s management have rewarded their director of rugby with a new contract which he richly deserves. Lam is in it for the long haul with the Bears and his new five-year contract, which comes into effect at the completion of his current deal, means he will be stay at the Ashton Gate-based outfit until the end of the 2027/28 campaign. The new deal unfortunately was not celebrated with an opening night victory though as they went down to…

The big man signs a 🆕 5⃣-year contract, following the completion of his existing deal, until the end of the 2027/28 campaign ✍️

Happy with that one, Bears fans❓ 💙 pic.twitter.com/0MJbjjLFzF

Saracens are back: What a performance that was from the newly-promoted side as they impressed against the Bears at Ashton Gate. The 26-9 victory came without them having the likes of Mako Vunipola, Jamie George, Vincent Koch, Maro Itoje, Owen Farrell and many more, but still they got the job done against one of last season’s best sides in the Premiership. Defensively Sarries were outstanding and they took their chances with ball in hand when they came too, with Alex Lozowski and Nick Tompkins impressing alongside each other. If there was any doubt Saracens would be title challengers on their immediate return to the top flight, they have been ended. This is a top class squad.

Duane Vermeulen joining Ulster: The Kingspan Stadium outfit have shown a statement of intent ahead of the inaugural United Rugby Championship by signing the Springbok number eight, who is one of the world’s best players in his position. At the age of 35, some might say that Vermeulen’s best days are behind him but that remains to be seen and his experience should prove invaluable for the Northern Irish outfit. Morale had dipped amongst amongst the Ulster faithful a few months ago when a deal fell through to sign Fijian utility forward and former European Player of the Year Leone Nakarawa after he failed a medical examination. However, that dejection has now been replaced by excitement and Ulster fans will be relishing the prospect of seeing Vermeulen in action later this year when he arrives on a two-year deal.

Springboks: The world champions were their own worst enemies for the second week in a row as they failed to stamp their authority on the match – something which usually helps them to ride roughshod over their opponents. They struggled out of the starting blocks, conceded needless penalties, battled on defence and failed to handle the pace and variety on display from the Wallabies. Scrum-half Faf de Klerk was the villain of the piece as his brain fade in the 12th minute when he knocked the ball out of Nic White’s hands at a ruck cost his team dearly. During De Klerk’s moment of madness stint in the sin bin, the Wallabies outscored the Boks 12-3 and his place in the run-on side could be under threat for Saturday’s Test against the All Blacks in Townsville. South Africa need a long hard look in the mirror this week.

Ludovic Radosavljevic: The 32-year-old back, who plies his trade as a scrum-half for Provence in the Pro D2, admitted to making racist remarks against Nevers’ Cameroonian wing Christian Ambadiang during a club match earlier in September and the game’s authorities in France have taken the matter seriously by suspending Radosavljevic for 26 weeks. According to Ambadiang, Radosavljevic called him a “banana eater” and after being found guilty by a National Rugby League disciplinary committee Radosavljevic initially received a 52-week ban but that was halved due to the “recognition of his guilt, his clean disciplinary record and the expression of remorse before the hearing.”

The LNR has confirmed that Provence scrum-half Ludovic Radosavljevic has been banned for 26 games for racially abusing Never's Christian Ambadiang during a game.

Ryno Pieterse seeing red: Staying in France and on Saturday there was a moment of madness from the Castres second-row that simply has to be seen to be believed. On as a replacement, the South African lock was given his marching orders in the 64th minute for taking out Bordeaux-Begles scrum-half Maxime Lucu with a tackle (we use that word loosely) which was unacceptable. Pieterse left the ground as he flew into Lucu, who was subsequently left floored and needed treatment. Unsurprisingly the Castres man was shown red by the referee.

Three straight for Stade Francais: There’s quite the French theme in our not list this Monday and unfortunately for the Parisians they make the cut after going down to a third successive loss to start the Top 14 campaign. Their latest negative was a heavy one away to Toulon on Sunday as the home side ran in five tries to their visitors’ one. Stade Francais’ season began with a home defeat to local rivals Racing 92 before they went down to Bordeaux-Begles on the road and subsequently sit rooted to the bottom of the standings. They will be eager to stop the rot at home to Castres this weekend but the visitors to Paris are no pushovers too after an unbeaten start to 2021/22. Worrying times.