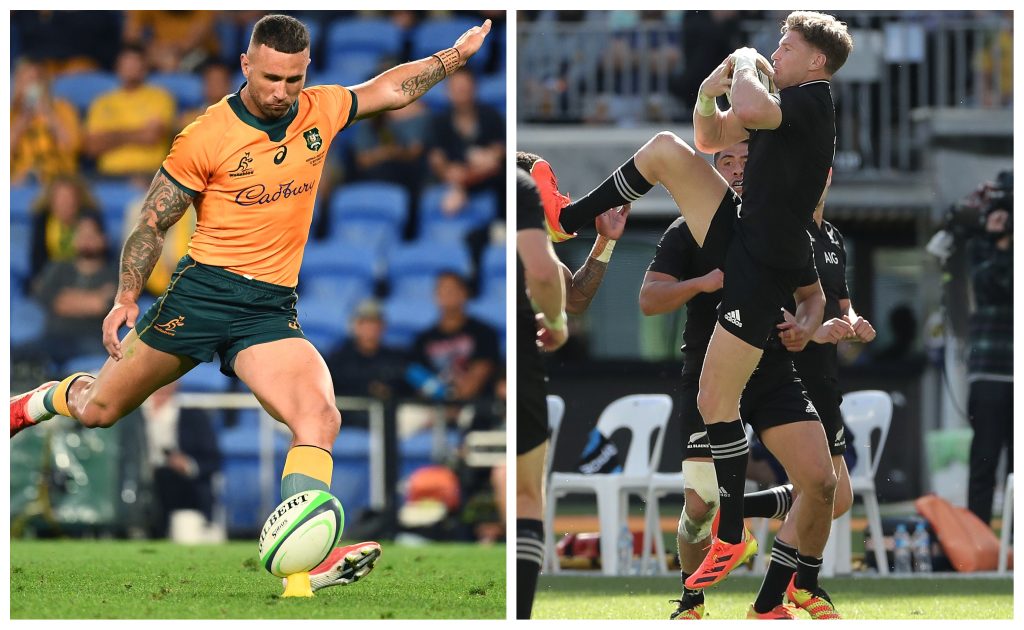 Quade Cooper: Cometh the hour, cometh the man. That saying holds true for the Wallabies’ veteran fly-half, who made a dream return to the Test arena at the weekend, after a four-year absence. The 33-year-old was the toast of Australia when his 40-metre penalty secured them a last-gasp Rugby Championship triumph against defending champions South Africa on the Gold Coast. It was a memorable day for Cooper, who was faultless off the kicking tee, as he succeeded with all eight of his shots at goal – courtesy of seven penalties and a conversion – which meant he finished the match with a 23-point haul. Well done, Quade, with this a message to many to never give up on your dreams. Bravo!

New Zealand’s ruthless streak: After claiming three wins in a row against Australia, Argentina were the next target for the All Blacks and they made light work of their South American opponents on Sunday. Five tries were posted in a 39-0 victory at CBUS Super Stadium, Rieko Ioane, Sevu Reece, Dalton Papalii and Luke Jacobson (two) crossing the whitewash as they dominated throughout. The All Blacks played their rugby at such a high pace that Argentina could not live with them and coughed up penalty after penalty in a clinical showing. Expect much of the same this weekend against the same opposition as we edge closer to those hugely anticipated clashes with the Boks.

Levan Maisashvili finally home: There was some positive news on the health of Georgia head coach Maisashvili last week as pictures emerged of him walking on his home soil again after two months in a Johannesburg hospital. He was admitted shortly after Georgia’s 40-9 defeat to South Africa at Loftus Versfeld early in July and diagnosed with ‘serious lung damage’. But there have now been happy scenes in Georgia when Maisashvili was greeted by players and members of the public upon his arrival in Tbilisi. A truly awful ordeal is finally over.

USA’s fine second-leg fightback: After going down to a shock 34-21 defeat in Newfoundland in the first leg, USA needed to regroup in quick time if they were to finish the Rugby World Cup qualifier with their noses in front. They did just that as an impressive 36-18 victory was secured in Colorado on Saturday as they won 59-50 on aggregate. The Eagles’ prize for this success is to progress into the next World Cup qualifying stage where they will face Uruguay in another two-game series. The winner of that will claim the America 1 spot in France.

Currie Cup silverware for Bulls: The Jake White-coached team cemented their status as South Africa’s leading team when they sealed an emphatic 44-10 victory against the Sharks at Loftus Versfeld on Saturday. The same two teams contested the 2020 final but unlike last season’s encounter – which was a nail-biting affair decided after 100 minutes of rugby – the Bulls dominated from the outset and were leading 19-3 at half-time. They eventually outscored the Sharks six tries to one and their 34-point winning margin is the biggest ever in a Currie Cup final. It was also the first time since the early 2000s that a team managed to successfully defend the Currie Cup title. Congrats to the Bulls.

Pumas getting nilled again: The last time Argentina faced New Zealand they lost 38-0 and on Sunday they were a point worse off as the All Blacks ran out 39-0 winners on the Gold Coast. The Pumas’ form has dipped considerably since their famous victory over New Zealand back in 2020 and while few expected them to come close to Ian Foster’s men in this clash, to be nilled once again will be difficult to swallow for their passionate supporters. They only have six days from the final whistle to regroup but from what we’re seeing, things could get worse.

Jordie’s rescinded red card: This was a decision that sparked outrage with fans as Barrett had his red card, issued against Australia on September 5, rescinded. The full-back was sent off after connecting with Australia wing Marika Koroibete’s head with his boot in the third Bledisloe game in Perth, but after a video conference, SANZAAR’s judicial hearing ruled that Barrett had inadvertently made contact with Koroibete’s head as he lost his balance in the air. With no intent to lash out, the hearing cleared him of wrongdoing and removed the card from his record, which allowed Barrett to return to All Black duty. Many, including us, were perplexed and feel it was worthy of a red card.

➡️ Jordie Barrett’s reaction to being cleared by the SANZAAR judiciary after his red card against Australia. pic.twitter.com/tWDUR6Upih

Proposed World 12s tournament: While we are supportive of bringing excitement and new ideas to the sport, especially after such a difficult period, it’s difficult to see how the World 12s is going to be able to attract not just the biggest names from around the world but also the masses of players under contract at clubs. Looking at the southern hemisphere, the proposed competition would clash with the Rugby Championship while it will be pre-season across Europe’s top leagues so what kind of standard would be on show? While money may turn players’ heads – we’ve seen Danny Care show his support – we can’t see clubs allowing their assets to play and risk injury ahead of 2022/23.

It's genuinely hard to take World 12s claims about growing the game of rugby at face value.

Creating new teams who have zero connection to any location, made up of new players every year, does absolutely zero for long term growth.

It's a TV rights cash-in at best.

Springboks’ goal-kicking: While Australia were celebrating Sunday’s memorable Rugby Championship victory on the Gold Coast, their opponents, South Africa, were left rueing several missed chances – especially off the kicking tee. Springbok fly-half Handre Pollard, who is usually a reliable goal-kicker, had an off day as he missed two conversions and a penalty with one of his kicks a routine effort that struck an upright. He was eventually replaced during the latter stages of the second half but his replacement, Damian Willemse, also missed his only shot at goal – a conversion attempt after Malcolm Marx scored his second try. That missed opportunity proved costly in the bigger scheme of things as it ultimately prevented the Springboks from claiming a draw. Ill discipline and a disappointing scrum also didn’t help their cause.

Handre Pollard lost the game, Simple. Missing a possible 8points at that level was always going to be punished #RSAvAUS pic.twitter.com/8xzHQRnSsq