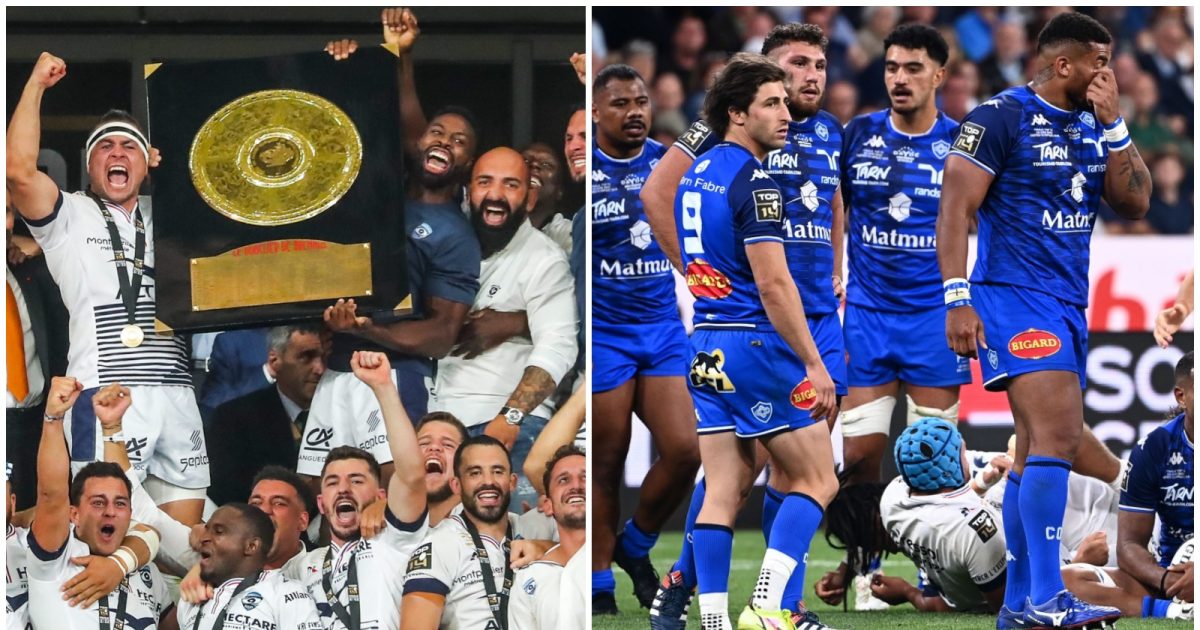 Montpellier make history: It’s congratulations to Montpellier after they secured their first top-tier domestic title following a superb 29-10 victory over Castres in the Top 14 final at the Stade de France on Friday. An impressive opening 20 minutes that saw them cross the try-line three times set the tone for their victory as Philippe Saint-Andre’s outfit proved too strong for their opponents in Paris. In what was a closely fought season that saw just six points separate the top six teams, Montpellier can be delighted with their efforts as good work earlier in the campaign meant three defeats in their last four regular-season games did not cost them a week off in the knockouts, with a semi-final win over Bordeaux-Begles followed by this Castres result showing that timing is everything. Celebrations will continue for quite some time.

Awards galore for Evan Roos: The Stormers number eight produced one of the best individual campaigns in recent times, topping ball carrying and defenders beaten statistics in the United Rugby Championship whilst scoring key tries in all his side’s knockout games en route to their first title. Awards have come thick and fast for the new Springbok call-up, who won the Next-Gen Player of the Season, Fans’ Player of the Season, Players’ Player of the Season and the Vodacom URC Player of the Season, as well as a spot in the URC Dream Team. These are impressive accolades for a single season for a quality player who is expected to thrive at Test level when he gets the opportunity during July.

Another day, another award for Evan Roos 🏆

The 22-year old has officially been named the @VodacomRugga #URC Player of the Season in South Africa for his performances in the Stormers' winning campaign 👏 pic.twitter.com/4H7ovH8wUf

Nick McCarthy’s bravery: Hats off to Leinster scrum-half McCarthy as he came out publicly as gay last week. McCarthy said that he had told his coaches last November and then came out to his team-mates in January, with this the next step. We’re delighted that he did not walk away from the game – something he was considering – and it’s fantastic to read his quotes about how boss Leo Cullen and the squad’s reaction made him whole-heartedly pleased that he spoke up. “They were all delighted for me and it was immediately a weight off my shoulders,” he revealed. Let’s hope scrum-half McCarthy’s bravery gives others confidence to follow his lead and not feel the same pressures he endured.

💙 | Scrum-half Nick McCarthy has spoken publicly for the first time about his sexuality.

He now hopes that sharing his experience will be encouraging and provide hope to others. 👏

Portugal go so close: Despite suffering defeat, Portugal deserve to feature in this section after they ran Italy close in Saturday’s clash. To go down by just seven points in a 38-31 reverse is mightily impressive considering the Azzurri line-up featured the likes of Ange Capuozzo, Hame Faiva, Leonardo Marin, Edoardo Padovani, Danilo Fischetti, Michele Lamaro and others, so Portugal can certainly hold their heads high after the weekend. Much like Scotland A facing Chile on Saturday, it’s excellent to see Six Nations outfits playing up-and-coming sides and it can only be a positive as the sport looks to close the gap in Tiers One and Two, ultimately making for more competitive World Cups.

Fair play to @Scotlandteam for touring Chile & giving them top level exposure. It's how to grow the game and how these nations get better. Just look at Portugal today against Italy. Spain have a decent team building then Uruguay in the WC in Japan. #GrowTheGame

Castres fail to show up: They will be kicking themselves after not turning up in the battle for the Bouclier de Brennus on Friday evening. Castres, who finished top of the table in the regular season, found themselves 20 points adrift by half-time as they were slow out of the traps in Paris, with Montpellier quite the opposite. At 23-3 down in such a high pressure game, the damage was done and so it proved as, despite winning the second period by seven points to six, Castres were forced to hold their hands up after being well beaten. Wounds will be licked.

Montpellier with a start straight from their wildest dreams! 😱

Three tries inside 12 minutes leaves them in a dominant position against Castres in the TOP 14 final 🔥 pic.twitter.com/8jIFHX5pbm

Covid interrupts preparations: The virus struck once more as an outbreak in the New Zealand camp forced Ian Foster, John Plumtree and Scott McLeod to isolate, and ruled David Havili and Jack Goodhue out of the first Test with Ireland. They haven’t been the only team to suffer, with their opponents over the next month also receiving a setback following Mack Hansen’s positive test. In Australia, England back Jonny May is isolating, putting the wing’s first Test participation in doubt. However, head coach Eddie Jones has refused to rule May out of selection, claiming there is a chance he could feature in the opener. Hopefully there aren’t too many more interruptions over the next month.

All happening in NZ!

Mack Hansen tests positive for Covid, as do David Havili and Jack Goodhue.

Carl Hayman’s dementia plight: This was an awful read as former All Black tighthead prop Hayman lifted the lid on his struggles with dementia. The former Otago, Highlanders, Newcastle Falcons, Toulon and New Zealand front-rower spoke about how he struggled after his  retirement with aggression and frustration issues, as he often turned to drink for relief. There was also a moment he forgot his son’s name before he found out at 42 years old that he had dementia. Dealing with that must be incredibly difficult for Hayman and his family, but the legend has spoken bravely on the subject. Well done, Carl.

🗣️ "You can do things to improve your quality of life. There is hope."

Racist comments to Luther Burrell: Some of the comments Burrell has been subjected to over the years are staggering. The former England centre, who has played for Leeds, Sale Sharks, Northampton Saints and Newcastle Falcons among others, took the brave step to speak out about what has been said during his player career, by his own team-mates no less. These have not been one-offs too as Burrell revealed several instances whereby awful comments that aren’t worth repeated were used. You did the right thing speaking out, Luther.

🏴󠁧󠁢󠁥󠁮󠁧󠁿 Luther Burrell opens up on racism experienced from teammates during his career.https://t.co/ydV67RIxhW