Home Who's hot and who's not Who’s hot and who’s not: Leinster, England duo, Munster and Owen Farrell 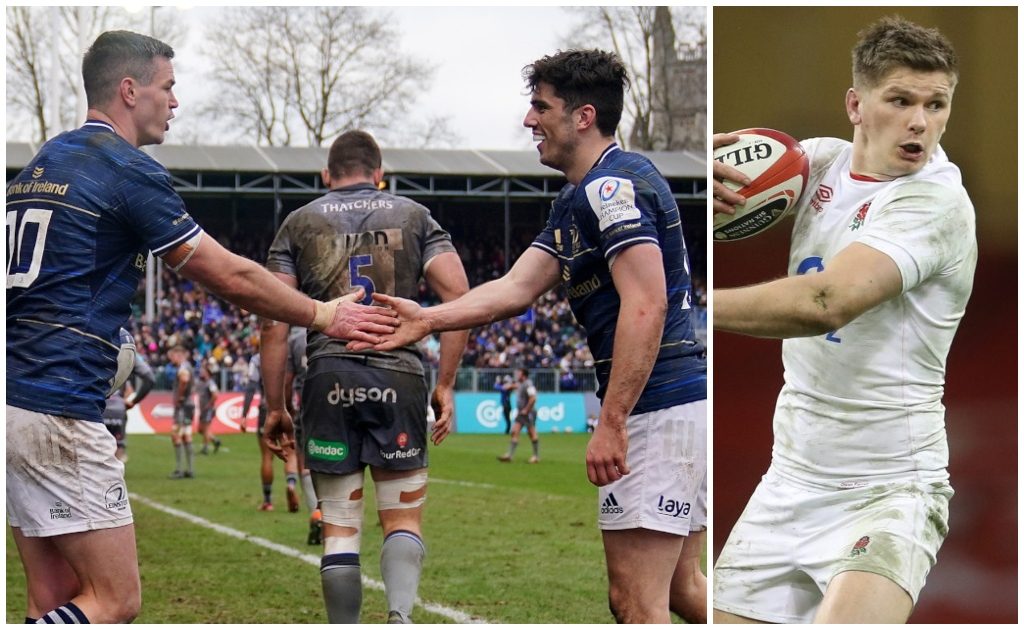 Jimmy O’Brien and Leinster: We ran out of superlatives for Leinster a long time ago and while it was expected they would prevail with plenty to spare at Bath on Saturday, to crush the Rec outfit 64-7 was pretty special. This big result comes on the back of that hammering they gave a weakened Montpellier in Round Three, which means they’ve scored 153 points in their past two outings, with Jimmy O’Brien earning individual plaudits after this most recent win. The lethal wing scored four tries while six other players also crossed the line, with that ability to share the tries around becoming a handy feature of Leinster’s victories. To a man they have threats across the field.

🎥 | Hear from Jimmy O'Brien who spoke to Leinster Rugby TV after scoring four tries and earning the Star of the Match trophy in today's 64-7 win over Bath at the Rec.

Alex Dombrandt and Sam Simmonds: The Harlequins number eight gave England head coach Eddie Jones a timely reminder of his capabilities as he played a starring role for his club during their 36-33 Champions Cup victory over Castres at Twickenham Stoop on Friday night. The 24-year-old showed his class on attack throughout a tight encounter and after being rewarded with a try during the early stages of the first half, he crossed for his second five-pointer early in the second period. The game’s closing stages were frantic and with time running out on the clock – and Harlequins trailing – up stepped Dombrandt, who went over for his third try deep into injury time and, in doing so, he also snatched a memorable win for the home side. The number eight is very much putting himself in contention to start in the Six Nations, but the same goes for Simmonds after he also crossed for a hat-trick in Exeter Chiefs’ 37-26 defeat to Montpellier. Two in-form eights.

Sage words from @Harlequins eight Alex Dombrandt who put on a true Man of the Match performance, scoring the winning try in a remarkable game 👏#HeinekenChampionsCup pic.twitter.com/vw31YJudUQ

Wayne Barnes: We talk more about Tolu Latu further down but, first of all, it was just rather refreshing to see a referee take a stand and show a card when a player has been rather too forceful in his complaints. What Latu said was utterly unacceptable and Barnes was absolutely correct to give him a second yellow card – thus sending the Wallabies hooker off. In fact, there was a similar incident a few weeks ago when Castres faced Harlequins and scrum-half Rory Kockott (who else) was completely out of line in the way he spoke to Nika Amashukeli. The Georgian referee didn’t take any action but the commentary team were surprised that Kockott was not, at the very least, sin-binned. Players should not be speaking to the officials in that way and the more the referees take action, the quicker it will be stamped out.

Free-to-air Premiership: For the first time in the Premiership’s history, the 2022 final at Twickenham will be free-to-air after the league agreed a deal with ITV. It includes four other free-to-air games this campaign and a highlights show running through to the 2023/24 season. The decision to allow free access to top flight rugby is ground-breaking to help grow the game of rugby by making it easily available. The Premiership have also underlined their commitment to one of their core values – inclusivity – and this has laid a positive foundation going forward. The first encounter on ITV will be Sale Sharks facing up against Leicester Tigers on January 30, with this a big step in the right direction to expand rugby’s audience and we hope to see more of these moves in the near future.

Six Nations newbies: A new competition often, if not always, brings fresh faces, and there were several interesting names in the respective Six Nations squads last week. England had six uncapped players in their 36-man group but it is highly unlikely all of them will feature over the next couple of months. However, Alfie Barbeary is one individual that should be given game time and, considering his destructive form for Wasps, we are excited to see him in action. Another young back-row we are pleased to see rewarded is Irish back-row Cian Prendergast, while in Italy teenage backline duo Leonardo Marin and Tommaso Menoncello are other players to watch out for. For Scotland, it wouldn’t be a surprise to see Rory Darge make an immediate impact, while France have a plethora of talented young players. Finally, Wales will hope Dewi Lake steps up at hooker, with Jac Morgan someone to watch if he can force his way into their excellent back-row. Best of luck to all.

Simon Zebo and Munster: Firstly a tip of the cap to Munster after their all-court victory against Wasps on Sunday. Seeing a 45-7 result might lead many to believe it was a walk in the park for the Thomond Park outfit but, make no mistake, there were times when Munster had to dig deep on their own try-line and it was outstanding defence which kept the Premiership side out. Eventually they ran out to a bonus-point win and Zebo was amongst the tries, scoring two, which moves him ahead of Anthony ‘Axel’ Foley in Munster’s European chart. Quite a feat.

Who else but Zebo!

Owen Farrell injury setback: England will be sweating over the fitness of captain Farrell as the Six Nations begins to loom large on the horizon. The Saracens stalwart was already making his way back from an injury but a statement from his club side last week confirmed he’s suffered a setback in training which has ruled him out of England’s camp in Brighton this week. That leaves Eddie Jones with a dilemma at both inside centre and in the leadership group and it must also be incredibly frustrating for such a competitive player. Recover well, Owen.

30 – Owen Farrell has featured in each of @EnglandRugby's 30 Six Nations matches under Eddie Jones; he's the only player from any nation not to miss a single match in the Championship since the beginning of 2016. Doubt. pic.twitter.com/Jdoa9d1Ukt

Mike Adamson, Brian MacNeice and Ben Botica: We’re always hesitant of criticising officials. Rarely, despite what fans have you believe, do they have a significant impact on a result and the majority of the top referees are consistent in how they implement the laws. However, that was not the case on Friday as Castres were very hard done by at the Twickenham Stoop. Particularly in the final 10 minutes, every decision seemed to go against the Frenchmen and the match duly ended in Dombrandt scoring the winning try. There was a forward Marcus Smith pass not picked up, several contentious breakdown decisions and then the final try itself, which also went Quins’ way. Referee Adamson went to TMO MacNeice with an on-field call of ‘no-try’ and on the evidence that was provided, it was not obvious that Dombrandt had reached the line. However, despite that, they still gave it, leaving every watching neutral fan completely bemused. Of course, Castres will rue other elements of their game, including the kicking display of Botica, who missed four conversions, but they can rightly feel aggrieved.

Mike Adamson has absolutely destroyed Castres in this game

Tolu Latu’s expletives in Paris: Referee Wayne Barnes was having none of Stade Francais hooker Latu’s comments during the Paris side’s clash with Connacht on Sunday. Barnes explained to the hosts’ captain what was said (we won’t repeat it) in a moment very similar to when Barnes red carded Northampton Saints hooker Dylan Hartley a few years ago. Swearing towards or in the direction of match officials should and will not be tolerated by referees and with microphones picking up plenty these days on TV, players need to watch their language.

Nathan Hughes out in the cold: The Bristol number eight was sent out to Hartpury after he was replaced only 45 minutes into his return to action following a four-month break based on form. A rumoured fallout with the Bears will likely see him eventually leave the club permanently, particularly considering the rapid rise of Fitz Harding. Hughes, 30, is currently a shadow of his former self and, after turning out in the Championship at the weekend, he has now joined struggling Bath on loan.

Not sure a player has dropped from form as much as Nathan Hughes. It's great for Hartpury but not sure it's a great advert for the player that with Bristol playing in Europe he's playing at Championship level https://t.co/WOGbnRSqPs

Thoughts with Tonga: It has been awful to see the destruction the tsunami has caused since it struck the country last week. A number of rugby players have been affected, including Wasps centre Malakai Fekitoa and Worcester Warriors number eight Sione Vailanu, who have both spoken about not being able to communicate with their loved ones in the Pacific Island. Fekitoa has opened a fundraising page to send humanitarian aid to Tonga, which has almost reached its goal of £50,000. Our thoughts and prayers are with all Tongans around the world.

Beauden Barrett concussion issues: The two-time World Rugby Player of Year revealed he is still suffering from concussion symptoms more than two months after leaving the field against Ireland in the Autumn Nations Series. Although Barrett is hopeful to return in time for the Super Rugby Pacific season on February 18, it is unsettling to see another rugby player suffer with long-term effects of concussion. He is following medical advice and the rugby world patiently waits to see the superstar back to full health, picking apart defensive lines yet again.