Home Who's hot and who's not Who’s hot and who’s not: Joy for Leicester, Crusaders and Stormers while England lick their wounds after Baa-baas loss 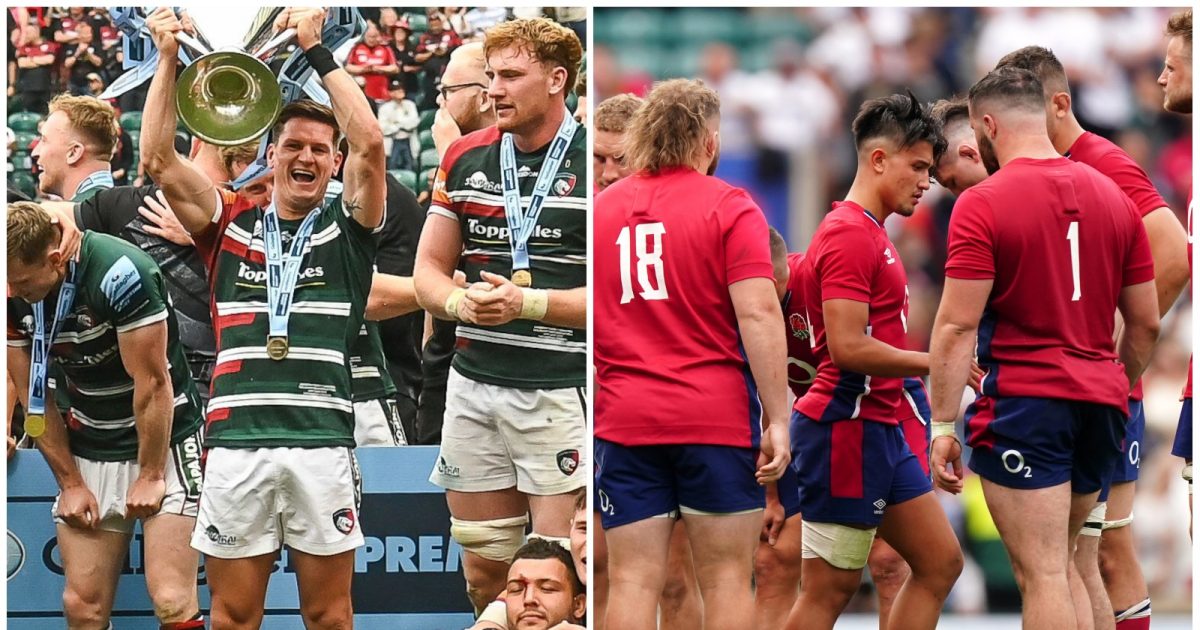 Leicester Tigers: A deserved Premiership title was claimed by Steve Borthwick’s men as they edged Saracens 15-12 thanks to a late drop-goal from Freddie Burns. The shock decision to start former Saracens veteran Richard Wigglesworth paid off as Leicester controlled matters at Twickenham as the club’s revival under Borthwick reached a crescendo. This is the Tigers’ 11th Premiership title and after finishing top of the regular season standings you’d struggle to find anyone arguing against the validity of their title success. What a season from this group.

Crusaders: Scott Robertson’s men added an outrageous 13th Super Rugby title to their trophy cabinet when they dominated the Blues 21-7 to secure the Super Rugby Pacific silverware on Saturday. The club’s ethos is centred on winning and playing key moments in the biggest of games – an excellent mantra to live by. It was an unbelievable effort from the Christchurch men, who have now won nine more titles than the nearest challenger, with the Blues blown away by one of the best final performances we have ever seen. Hats off to the incredible Crusaders.

Stormers: The Stormers completed their fairytale season by claiming the United Rugby Championship title after beating the Bulls in Cape Town. A tremendous effort for a team that has been in financial ruins in recent years and had 88-1 odds of picking up the title. Head coach John Dobson and captain Steven Kitshoff have led passionately and inspired their troops to create history. A rugby moment to remember.

More accolades for Evan Roos: Talk about making a name for yourself in the first United Rugby Champions season. Roos has taken the competition by storm this term and picked up his fourth and final award on Thursday when he was crowned Players’ Player of the Season. The Stormers number eight looks destined for Springbok honours next month against Wales, with his all-action style catching the eye on a global scale. His other gongs included the Next-Gen Player of the Season, Fans’ Player of the Season and a place in the URC Dream Team.

The 2021-22 Vodacom #URC belonged to one man and one man only: Evan Roos 👏 pic.twitter.com/ue5PsIrBlP

David Pocock becomes ACT senator: The Wallaby back-row legend has followed up a stellar rugby career with yet another impressive achievement after he was confirmed as the first independent senator in the Australian Capital Territory (ACT) by the Electoral Commission. His campaign based on people and climate change has reaped rewards and it clearly had an impact as he unseated the former minister Zed Seselja. If he is half as determined off the field as he was on it, ACT can expect the rugby great to back up his talking. Congratulations, David.

We've officially made history! Thank you all.

What a huge honour to be able to serve the people of the ACT as a Senator. pic.twitter.com/OoORMmjJ4Z

Racist abuse aimed at Ellis Genge: Unfortunately the Tigers’ epic Premiership title win was soured by racism as Genge posted on social media overnight that he had been racially abused. After the Leicester and England prop sent out a celebratory message following their great triumph, he then revealed in the early hours he had received a racial slur on Twitter. “On another note, think it’s important to highlight that this is still a massive problem, from a legit account too. Not here for a headhunt hence the black out, common occurrence and socials/law should come down on it,” he wrote. There’s no place for racism in sport and general life and what a shame for Genge it soured a special day.

This kind of thing just cannot be accepted and swept under the carpet. Credit to Ellis Genge for highlighting the wider problem https://t.co/dZ5jOYw7EU

England’s performance: Despite appearances, Eddie Jones will be livid on the inside after his side’s dismal outing against the Barbarians on Sunday. Many of the players were hoping to force their way into the touring squad, but their 52-21 defeat to the invitational side and the abject showing in the second period against 14 men seriously dented their chances. England fell apart against the Will Skelton-less Baa-baas as Fabien Galthie’s men amazingly grew stronger as the game wore on. Yes, this was a strong French-filled side but Jones and England fans would have expected a lot more from those in red shirts, with this performance a real eye-opener that has possibly ended some Test careers.

The end of Super Rugby? There was some surprising news last week when it was revealed that Rugby Australia (RA) could break away from New Zealand Rugby (NZR) from 2024 onwards. It would pretty much spell the end of Super Rugby with the Australians interested in setting up a domestic-only competition. A $60m differential in TV deals between the respective countries is seen as the reason for Australia’s frustrations, but they could well be using this as a bargaining ploy. RA chairman Hamish McLennan is the one who caused all this debate and his comments, according to sources, appeared to catch the governing body’s CEO, Andy Marinos, on the hop. The NZR didn’t sound unduly worried either in response to McLennan’s statement, but the RA chairman has certainly thrown the cat among the pigeons with his quotes.

EXCLUSIVE: Rugby Australia has told long-time ally New Zealand Rugby it is ready to walk away in a bombshell move that will tear Super Rugby apart.

Alex Dombrandt injury setback: Not long before kick-off in Sunday’s England v Barbarians clash, news broke that promising number eight Dombrandt was ruled out of the game due to a knee issue. The Harlequins back-row suffered the injury at training on Friday and this has ultimately ruled him out of England’s upcoming tour to Australia, with a scan confirming his absence. This is a sizeable blow to England who are already without Sam Simmonds, which means Billy Vunipola has made a shock return to the squad that was announced on Monday.

Will Skelton seeing red: With a couple of minutes remaining in the first half at Twickenham, Skelton’s moment of madness that saw him make a no-arms tackle on England prop Patrick Schickerling saw him given his marching orders. Put simply, his shoulder to the head tackle was avoidable and could have cost his team a famous win. Yes, Wallaby lock Skelton is a massive player and getting low in contact areas is hard to do for a man his size, but with so much time to pull out of the hit and with the risk involved, criticism unfortunately comes his way.