Home Who's hot and who's not Who’s hot and who’s not: James Lowe shines, Blues delight and Munster’s unfortunate move to Dublin 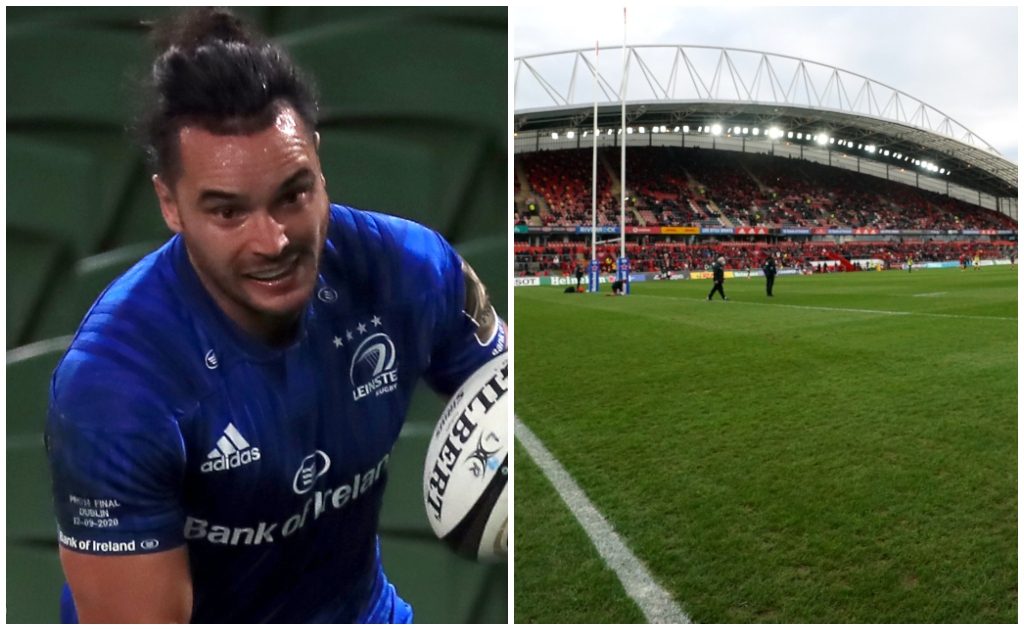 James Lowe scoring four: The Leinster wing delivered an excellent attacking display in his team’s Champions Cup Round-of-16 victory against Connacht, scoring four tries in the 56-20 win. The 29-year-old is a key cog in the Leinster machine and after crossing for a deserved score during the first half’s latter stages, he turned on the style during the second period and was rewarded with a hat-trick of five-pointers for his efforts as Leinster cruised into the quarter-finals. Lowe’s try-scoring heroics means he is now the Champions Cup’s leading finisher for the season with eight tries. It wasn’t long ago that Lowe was being criticised in Ireland so it’s pleasing to see him back better than ever.

Great pictures from the end of @leinsterrugby vs @connachtrugby as @JamesLowe_03 gives his Heineken Star of the Match Award to young fan Adam Reddington from Roscommon! 💚💙 (📸 @INPHOjames) pic.twitter.com/h68k1cPD9T

Blues break 18-year Christchurch hoodoo: The Blues snapped an 18-year winless streak against the Crusaders in Christchurch as they sealed a 27-23 win in what will go down as a classic New Zealand derby. The game had everything; electrifying running, brilliant tries, cards of all colours and one of the best match-winning tackles you will ever see — a massive win for a Blues side that has shown plenty of promise this season. Dalton Papalii led the Blues with a tremendous performance that will be considered right up there with the best games he has played between the four lines. The openside flanker has now surely thrown his name onto the All Blacks’ starting team sheet this season.

Graham Rowntree: After a wait that must have felt like eternity for the Englishman, Rowntree was finally confirmed as Munster’s new head coach next season when he takes over from Bath-bound Johann van Graan. Rowntree is well respected at the province by supporters, staff and players so it is a welcome appointment and credit to him for bouncing back from the disappointments with England in 2015 and carving out a successful career in Ireland. What made his week all the more sweeter was seeing Munster progress in the Champions Cup.

Champions Cup two-leg format: Our support for this new format has been lauded in last week’s Loose Pass and it more than delivered again over the weekend as the dramatic finishes to 160 minute ties were clear to see. With some teams needing big comebacks while other games were in the balance, the second legs delivered over the weekend as Harlequins came close, Munster got the job done and Toulouse kept their title defence on track just some of the highlights. It will be interesting to see if the format is retained but let’s savour it right now.

WHAT A BEAUTIFUL TRY!! 😍

Excellent work from Danny Care to keep it in, then Marcus Smith sets off like a rocket! Playing in Cadan Murley who plays in Joe Marchant for the try! 🔥

Europe’s quarter-finalists: There were several standout individual performances over the weekend such as Peter O’Mahony, Lowe and Harry Potter in the Champions Cup and Alfie Barbeary in the Challenge Cup, with team showings to boot and that’s why we’ve opted to laud the final eight in both competitions for getting the job done this past weekend. Congratulations go to Leinster, Sale Sharks, Montpellier, La Rochelle, Munster, Leicester Tigers, Toulouse and Racing 92 in the top tier tournament and Lyon, Glasgow Warriors, Edinburgh, Wasps, Toulon, London Irish, Gloucester and Saracens in the Challenge Cup. These 16 sides have moved one step towards European glory. Bravo.

No Thomond Park comforts for Munster: Double booking your venue which means you have to move a Champions Cup quarter-final will sting Munster and their supporters, of that there is little doubt. Yes, Ed Sheeran is playing at Thomond Park on the evening the team is set to face Toulouse and on Sunday it was confirmed that Munster would be moving the game to the Aviva Stadium. Of course the passionate supporters in red will travel to Dublin and make their voices heard, but not having a packed out Thomond Park – where players know every blade of grass – could be costly when all is said and done. What a shame for the locals this mouth-watering tie isn’t at their Limerick home.

Any Munster "home" game that's in Dublin isn't a home game at all.

Let's hope a bit of imagination and collaboration can be used to make something special happen.#SUAF

Axel Muller suspended for foul play: Foul play is once again in the spotlight of the rugby world. Brive back Muller was sent off over a week ago against Saracens and later banned for five weeks for a shocking challenge. Defending a two-on-one situation, Muller seems to jump up and intentionally make contact with the opposition player’s head as he passes the ball. It is a nasty tackle and should not have a place in today’s game, with many viewing his eventual five-week suspension as somewhat lenient. When you look at other bans, they have a point.

So Guy Porter gets pretty much the same punishment for running into somebody as Axel Muller got for assault. I know all about player welfare but this is ridiculous. pic.twitter.com/BiKRG9CtZm

Those supporting the 20-minute red card: It’s a hot topic at the moment and we’re in the camp of being against the expansion of the 20-minute red card trial. This comes after World Rugby revealed it will consider integrating the law into more tournaments worldwide to generate extra data to determine its viability. Currently being used in Super Rugby Pacific, a red carded player will leave the field for 20 minutes and then can be replaced by a substitute, thus likely putting the disciplined team back up to a full compliment. Nigel Owens has already criticised the idea to expand its use and we agree, especially in an age where player safety should be paramount. It’s a no from us.

A 20-minute red card papers over the cracks – it is totally wrong, and if we go down that route then rugby is going to be in trouble | @Nigelrefowens https://t.co/GlKZTzNf4d

Scott Barrett: Speaking of which, although the Blues were deserved winners in that enthralling Super Rugby Pacific encounter against the Crusaders, the home side nearly stole that result as they came back strongly during that game’s latter stages. The Christchurch-based outfit’s supporters will be wondering what could have been if their captain Barrett had stayed on the field after receiving his marching orders for an illegal tackle on Alex Hodgman early in the second period. Barrett’s shoulder to Hodgman’s face was dangerous and there was no mitigation which meant the lock couldn’t complain when referee Mike Fraser sent him off. Again, Super Rugby Pacific needs to improve its discipline.

How long should Scott Barrett be suspended for his red card offence? pic.twitter.com/7aEjbkx3Dl

Injury blow for Anton Lienert-Brown: The worst possible news hit the Chiefs centre last week as his shoulder injury sustained against the Blues in Super Rugby Pacific will rule him out for six months. That is due to him requiring surgery on the issue and will likely mean he misses out on any international rugby for the All Blacks this year. It’s of course a major blow for the Chiefs and player and we wish him well.

Anton Lienert-Brown out for 6 months. Gutting for him. And what’s the All Blacks’ midfield now?