Home Who's hot and who's not Who’s hot and who’s not: Jake Polledri’s return, Blitzboks’ Commonwealth Games win and George Ford’s injury 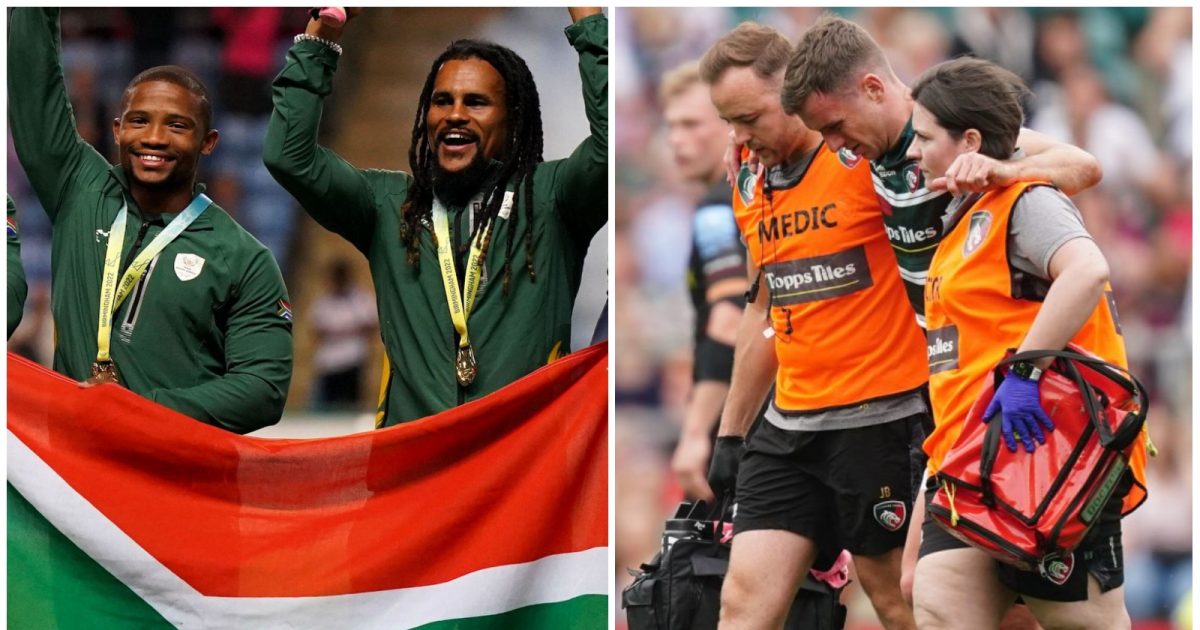 Jake Polledri regains full fitness: After being on the sidelines since November 2020, Gloucester announced that the Italy international had returned to fitness and also signed a new deal for good measure. Polledri sustained a horrendous injury which saw him suffer a ruptured anterior cruciate ligament, posterior cruciate ligament and lateral collateral ligament, as well as a fractured leg, torn calf and ruptured a hamstring off the bone – all from an innocuous slip. It was career-threatening but thankfully Polledri has recovered and is back in training. It is so good to see the powerful ball carrier return and hopefully he will be wreaking havoc soon.

RG Snyman nearing return: There was good news for Munster and Springboks supporters after the Irish province revealed last week that the behemoth second-row is close to full fitness after a lengthy spell on the sidelines. The 2019 Rugby World Cup winner joined Munster in 2020 but suffered an anterior cruciate ligament (ACL) injury on debut against Leinster. He was then sidelined due to burn wounds suffered during a fire-pit accident and eventually returned to action in October last year. That was a brief comeback as Snyman re-ruptured the same ligaments in his next game – against Scarlets – but is now close to a full recovery as he has been part of Munster’s pre-season training programme.

🗣️ "There is good news on the injury front as we started the pre-season training programme with RG Snyman (knee) reintegrating to team training."

South Africa Sevens: The Blitzboks were in excellent form at the Birmingham Commonwealth Games as they went the entire weekend unbeaten at the tournament which was held at the Coventry Stadium. Neil Powell’s charges were in a dominant mood from the outset and made a terrific start as they cruised to pool victories over Malaysia (46-0), Tonga (36-5) and Scotland (34-0). They then sealed another comfortable 33-0 win over Canada in the quarter-finals before working hard for a 24-12 triumph over Australia in the semi-finals. That meant they had to face Fiji in the final but South Africa had too much firepower for the Pacific Islanders and sealed another deserved 31-7 victory to win their second Commonwealth Games Sevens title after their previous one in Glasgow in 2014.

A Sevens masterclass in the final from the @Blitzboks!

Hong Kong Sevens is back: The crown jewel in the World Rugby Sevens Series will return after the Hong Kong Rugby Union was given the green light from the government to host the tournament later this year. It has not taken place since 2019 due to the Covid-19 pandemic and the subsequent restrictions imposed, but thankfully they have been given the go-ahead to bring it back in November. Although there will be a limit on capacity and fan numbers, it is a significant boost for the Sevens game as their biggest tournament returns.

🗣️ “Sevens is very much at the heart of our reputation, of our brand, of our spirit.”

🇭🇰 The Hong Kong Sevens is to return later this year! 👇 https://t.co/EiNzfXTFvX

Right decision made over trans participation: It is an emotive subject and one which has been an incredibly divisive issue, but it is difficult to argue with the science provided. On Friday, the RFU voted to ban trans women from taking part in the female category at all levels, which has seen a fair few people take to social media to criticise the decision. However, extensive research has concluded that there is both a fairness and safety issue should trans women continue to take part in women’s rugby. They retain significant physical advantages, even after treatment to suppress testosterone levels, and as a result it is the correct decision.

In my opinion this is right for the game at the moment, as it is supported by science/current research on the safety of players.

You may agree or disagree with my view, but either way, everyone should be entitled to share their opinion without the fear of judgment or hate! https://t.co/Ise6rijapH

George Ford injury: When the England fly-half suffered an ankle injury during Leicester’s Premiership final victory over Saracens, it looked a bad one and Sale Sharks director of rugby Alex Sanderson confirmed last week that he will spend a significant spell on the sidelines. It means that Sale will be without their star signing until December at the very earliest, but it is especially frustrating for Ford, who won’t be able to show his qualities ahead of the November Tests. With Marcus Smith settling in nicely at international level and Owen Farrell an ever-present for the Red Rose, the 29-year-old has slipped down the pecking order. However, he was the best fly-half in the Premiership last season and deserves another shot in a white jersey.

🗣️ "We are hoping he will be back in six to nine months for the Leicester home game at the end of the year." #GallagherPrem

SANZAAR double down on 20-minute red cards: When World Rugby thankfully rejected a global trial, we thought that would be it, but no, the southern hemisphere decided to reintroduce it into the Rugby Championship. It is a dreadful decision and does the sport no good. We understand why players and coaches like the law, because it means there is less consequence for a sending off, but that is ultimately why rugby needs stricter punishments for red cards. It’s quite simple really; if you don’t want to get a red card, improve your technique. SAZNAAR are effectively excusing dangerous and reckless, which could lead to serious consequences on the receiving end of these hits. In the week the concession lawsuit against rugby’s governing bodies continues apace (more of that below), it is a very bad look.

In the days following Ryan Jones' desperate revelation, and the dementia lawsuit against governing bodies, SANZAAR's embracing of the 20-minute red card is a spectacularly bad look for rugby.

Concussion lawsuit set for the courts: Rugby union is set for turbulent times after it was revealed that a group of former professional and semi-professional players are suing World Rugby, the Welsh Rugby Union and the Rugby Football Union due to permanent injuries caused by brain damage from playing the game. In what is set to be a landmark case for the game, the issuing of proceedings will take place on Monday. Players diagnosed with early-onset dementia and other irreversible neurological impairments include England 2003 Rugby World Cup winner Steve Thompson and ex-Wales skipper Ryan Jones and they are arguing that rugby’s governing bodies’ were negligent by failing to take reasonable action to protect players from permanent injury caused by repetitive concussive and sub-concussive blows. If the courts rule against the governing bodies, the financial repercussions will be massive.

“I’ve got no memory of World Cups.”

Former rugby player Steve Thompson tells @krishgm the impact that early onset dementia has had on him. He is one of almost 200 former rugby players suing the sport's governing bodies after sustaining brain damage.https://t.co/qCxBYOmtF0

More All Blacks fallout: It was pretty bad in the immediate aftermath of New Zealand’s defeat to Ireland but it has arguably gone up another gear over the past seven days. Current and former All Blacks have both been having their say, but ex-head coach Steve Hansen and former CEO David Moffett were arguably the most scathing. While Ian Foster was the person in the firing line following the Irish result, ire has been turned to New Zealand Rugby and their chief executive Mark Robinson. It is pretty unedifying and ramps up the pressure on the double-header against Springboks. Lose those matches and it will get even worse, which is a frightening thought.

🗣️ "We don’t need a CEO to learn how to be a CEO at New Zealand Rugby. We need somebody who knows what they’re doing."

🇳🇿 New Zealand Rugby boss in the firing line over his position. 👇https://t.co/mVMLa5fyzp