Home Who's hot and who's not Who’s hot and who’s not: Ireland, Scottish defence, Tonga fundraising and Luke Cowan-Dickie 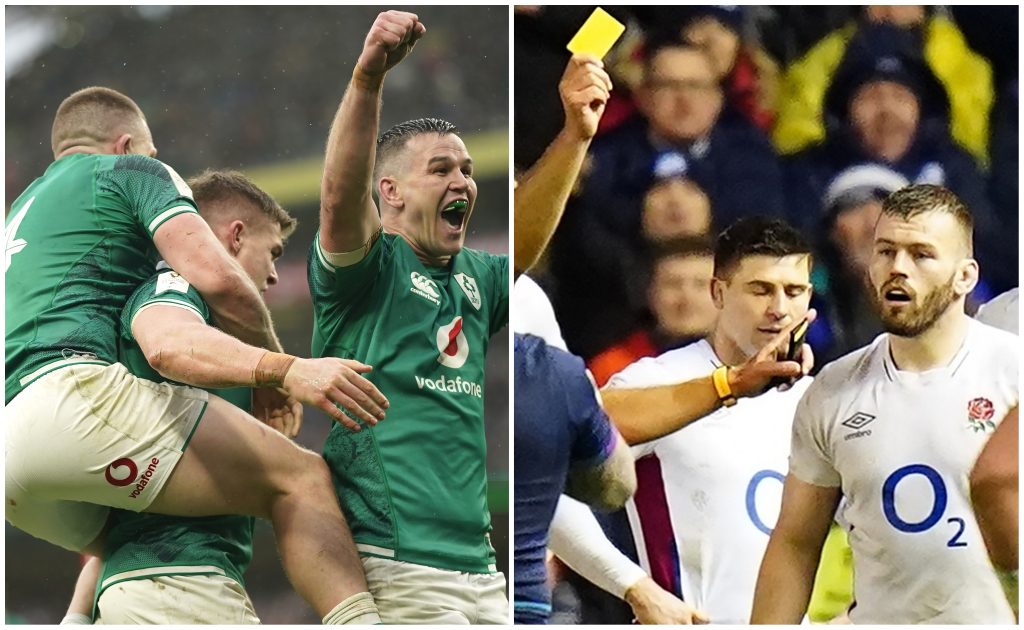 Ireland: Hopes were high following their impressive Autumn Nations Series campaign and they were right to be positive after they dismantled defending champions Wales in the Six Nations opener. The Irish were impressive in pretty much every facet, with the forwards dominating and the backline taking advantage of their excellence up front to ease to a bonus-point triumph. The encounter with France this weekend will tell us more but, on this evidence, that could well be a title decider.

Scottish defence: Gregor Townsend’s men are also in the title race after showing superb resilience to defeat their Auld Enemy at Murrayfield. England were the side in control in the first half and, to be honest, for most of the match, but the Scots’ defence, marshalled by Steve Tandy, was exceptional. They resisted several waves of attack, earning a 10-6 lead, before the hosts remained on the back foot in the early stages of the second period. This time the Scots were breached by Marcus Smith but, unperturbed, they hit back and edged to a 20-17 victory. Make no mistake, they would have lost this match in previous years, which shows how far they have progressed.

Gloucester: The Cherry and Whites continued with their excellent recent form when they sealed a 27-7 victory over London Irish in their Premiership encounter at Kingsholm on Friday. Despite the big winning margin, they were made to work hard for their victory as after holding a 7-0 half-time lead, they gradually gained the upper hand and secured the result in the game’s closing stages. That means Gloucester have now won three successive matches and are firmly entrenched amongst the top teams in the standings. Leading the way on Friday was back-row Ruan Ackermann, who scored a brace of tries and his fine form has led to Gloucester boss George Skivington saying he is close to an England call-up.

✍️ Read the match report from the #GallagherPrem clash at Kingsholm. https://t.co/cdWhXnAYGF

Callum Powell: The 10-year-old Ospreys supporter deserves plenty of praise after he decided to do a five kilometre run to raise funds for a prosthetic leg for the Welsh region’s former hooker Ifan Phillips. The 26-year-old had his leg amputated following a motorbike crash and a crowdfunding page was then set up to support him. Callum’s run has already raised more than £2,500 towards the fund and there was a surprise for the youngster when he completed his run as Phillips was waiting for him at the finish line to thank him for his wonderful effort.

Watch the heartwarming moment Ospreys player Ifan Phillips surprises 10-year-old fan Callum Powell, who is fundraising to help get the rugby star a prosthetic leg. Phillips had to have his leg amputated following a motorcycle accident last December. https://t.co/g8mQHRY2F6 pic.twitter.com/MklKD5a50W

Gabin Villiere and other red hot wings: The opening round of the Six Nations saw several wings hit the ground running and none more so than the French finisher. Villiere crossed for three well-taken scores – the second being of the highest order – as he helped Les Bleus get the job done against a gutsy Italy on Sunday. 24 hours earlier there were a few more wide man that caught our eye as Mack Hansen enjoyed an outstanding debut for Ireland while Andrew Conway also helped himself to two tries. Then at Murrayfield it was a strong showing from Darcy Graham as Scotland got their campaign off to a flyer against England. We hope to see more from these finishers in the coming weeks.

An electric hat-trick from Gabin Villiere has helped @FranceRugby to a winning start in this year's Six Nations #FRAvITA pic.twitter.com/wd1tFVPL1X

Tonga fundraising: The South Pacific island nation was left reeling after last month’s devastating Hunga-Tonga-Hunga-Ha’apai underwater volcanic eruption which caused a tsunami and a communications blackout. And while Tonga is slowly coming back to normality, the rugby community has wasted no time to unite in an effort to raise funds to help rebuild the country. Following the devastation, Wasps, Tonga and former All Blacks centre Malakai Fekitoa has started raising relief funds via a GoFundMe page while, in Australia, Tonga head coach Toutai Kefu will lead fundraising efforts by playing for a Tongan invitational side against the Vintage Reds in a Super Rugby Pacific curtain raiser to the Reds v Melbourne Rebels game on February 19. There are several other similar initiatives and all the best to all involved.

Donate now via the link in our bio.

Wales: The result was perhaps not surprising given their absentees, but there was still a distinct lack of clarity in what they were trying to achieve on Saturday. Moving Josh Adams to centre was bizarre and combining him with a player that has had his defensive issues at Test level in Nick Tompkins was not the wisest decision. As a result, Ireland continually exploited that midfield channel and found holes in the Welsh rearguard. To be perfectly honest, they were fortunate to not ship 50 points and were thankful it was ‘only’ a 22-point defeat in the end.

You can sum up someone's game in two clips. But allow me to try and do just that. Two defensive reads here for Josh Adams. One when he was playing centre and one later when he was shifted to the wing.
The first one is what I feared in that thread earlier.

England’s bench decisions and Luke Cowan-Dickie: Eddie Jones has defended his decision to take off Marcus Smith but we’re still wondering why he did it. Smith’s withdrawal was just one of a number of bizarre in-game calls from the Red Rose head coach, with Lewis Ludlam another player that was unfortunate to be replaced after a storming effort. A third error came when England had a lineout on their own five-metre line but decided not to bring on Jamie George when Cowan-Dickie was in the sin-bin. The result? A botched throw, a penalty at the resultant scrum and Finn Russell‘s match-winning three-pointer. Of course, that would have been a moot point had Cowan-Dickie not stupidly knocked the ball intentionally into touch, leading to a penalty try and yellow card, but it rather summed up their game.

"The opportunity to close out a game would have been great for him, it must have been premeditated."

Tabai Matson offers his thoughts on Marcus Smith's removal from England's loss to Scotland with 20 minutes to go.#GallagherPrem | #GuinnessSixNations pic.twitter.com/noZIQM74Fr

Drastic measures in Wales: The drink situation at the Principality Stadium in Cardiff will be different this Six Nations after it was revealed last week that beer will not be served during the second half of matches in an attempt to crack down on drunken behaviour of spectators. After much consideration, the Welsh Rugby Union also opted to reduce the strength of the beer, in an attempt to dampen down the alcohol-fuelled disruptions. These decisions were made after some unpleasant incidents at the venue during Wales’ Autumn Nations Series Tests with stories of foul language, beer-spreading and vomiting doing the rounds on social media and there was also the case of a pitch invader preventing a Wales try during their Test defeat to the Springboks. It’s a real shame that the situation has come to this as it’s the behaviour of a few drunkards which is ruining it for many other spectators.

🍺 Weaker beer and no servings during the second half of games.

Another legend passes away: It was a sad day for Irish rugby and the game as a whole when it was revealed that former Ireland and British and Irish Lions full-back and captain Tom Kiernan had passed away last week. The 83-year-old was a genuine legend who, apart from shining as a player at Test level, also made his mark as a coach with Munster and Ireland and had successful stints in that role with his province and country before also making a positive impact as an administrator in Ireland. He played in 54 Tests for Ireland, of which 24 was as captain, and also skippered the Lions on their tour of South Africa scoring 193 points in all his Tests.

Yesterday we marked the passing of a true legend of Irish Rugby. As a player, coach and administrator his legacy is unmatched.

A season of disruption for Super Rugby Pacific? Coronavirus has once again reared its ugly head in the sporting world. The exciting new Super Rugby competition has already taken its first hit from the Omicron variant, which is current causing issues. The pre-season duel between the New Zealand-based Hurricanes and Blues had to be relocated to Wellington from Auckland due to the risk level. This comes following the news on Wednesday of a Super Rugby bubble being formed to protect players and their families from the virus. The bubble, based in Queenstown, is said to cost New Zealand Rugby more than one million dollars as it will involve moving roughly 300 players and coaches to the lakeside town. With the Western Force also being forced to move and crowds being limited in New Zealand due to restrictions, there are serious concerns before Super Rugby has even begun.