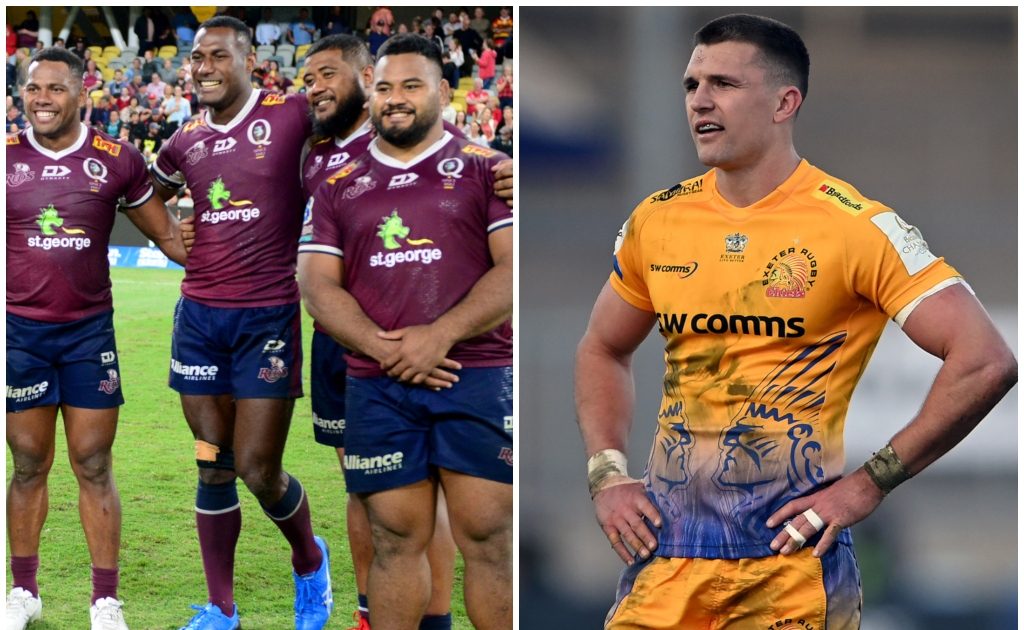 Sale Sharks and Harlequins: Congratulations to the two teams, who joined Exeter Chiefs and Bristol Bears in securing their Premiership play-off places. Although their success denies the neutral potential final-day drama at the end of the regular season, they have comfortably been the best and most consistent four teams in the competition. The Sharks secured their position after impressively overcoming league leaders Bristol 22-12 before Quins beat Bath 44-33 in a thrilling contest. Although Exeter are favourites, with the Sandy Park outfit coming into form at the right time, the other three all have the firepower to claim the title.

Reds: Finally, the drought is over! After 13 successive defeats in Super Rugby Trans-Tasman, the Queenslanders have claimed the first Australian victory over their New Zealand rivals by beating the Chiefs 40-34. They were excellent in the first half, taking advantage of Damian McKenzie’s red card and going 33-3 ahead at the interval, before the visitors came back in the second period after returning to 15 men. It meant a tense end to the match but the Reds did enough to hold on and give the Australian supporters something to celebrate.

The @ChiefsRugby fell short of an epic comeback on Saturday in Townsville, as the Queensland @Reds_Rugby earned the first win by an Australian team in Super Rugby Trans Tasman.#SuperRugbyTT #REDvCHI pic.twitter.com/GXHzt9reMT

Billy Twelvetrees: The Gloucester veteran was the toast of Kingsholm when he held his nerve to slot a 40-metre goal-kick in injury time which sealed a dramatic 30-28 triumph against London Irish in their Premiership encounter on Friday. Momentum between the sides ebbed and flowed throughout with the lead changing hands on five occasions before Twelvetrees’ late heroics clinched the result for the Cherry and Whites. The triumph was an important one for Gloucester as it means they are still in the hunt for a spot in next season’s Champions Cup with two rounds of the Premiership campaign left to play.

What a moment in front of the Kingsholm crowd!

Manu Tuilagi and Courtney Lawes are back: It was a great weekend for the two England internationals as both made winning returns for their respective clubs in Premiership matches. Tuilagi, who has been sidelined for eight months with an Achilles tendon tear, came on as a second half replacement for Sale Sharks in their triumph against table-toppers Bristol Bears while Lawes, who returned after a three-month absence due to a pectoral injury, did well to get through 67 minutes before being substituted in Northampton Saints’ victory over Wasps. Both Tuilagi and Lawes will be hoping to stay injury free as they bid to return to the Test arena, the former for England’s home internationals against the USA and Canada and Lawes for the British and Irish Lions series against South Africa.

You absolutely love to see it 😍@Manutuilagi makes his @SaleSharksRugby return after eight months out injured.

Listen to the roar in the AJ Bell! pic.twitter.com/lFPyPVWFE2

New Zealand Super Rugby teams: After three rounds of action in the newly established Super Rugby Trans-Tasman tournament, the gulf in standard between New Zealand’s franchises and their Australian counterparts is pretty plain to see. Despite that win for the Reds over the Chiefs, the rest of the games went according to script with the Hurricanes, Crusaders, Blues and Highlanders winning their fixtures against the Western Force, Waratahs, Brumbies and Rebels. That means that Kiwi teams have won 14 out of the 15 matches played in the competition so far. Dominance.

Benetton: After failing to win a match during the PRO14 campaign, the Italians have been exceptional in the Rainbow Cup. They have claimed four successive triumphs during the competition and reside at the top of the table after overcoming Connacht on Saturday. It means that they are just one victory away from claiming a place in the final, which is actually scheduled to be played at Benetton’s home ground at the Stadio Monigo. Should they defeat the Ospreys in their final match and make the showpiece event then it would complete an outstanding turnaround for the team.

Henry Slade: We don’t agree with those who say Slade should have remained silent on the matter – he has a right to voice his opinion – and some of the abuse the England and Exeter Chiefs centre received was abhorrent, but people are quite right to criticise the 28-year-old. It is concerning that a high profile athlete doesn’t “trust” the vaccine, a comment which perpetuates a myth when all the jabs have passed the necessary safety checks. Although a later statement attempted to clarify his comments, it was rather disrespectful to the journalist (see Kate Rowan’s statement below) who was merely doing her job. A disappointing couple of days from the Exeter man.

I was a journalist doing my job. But I am horrified by the abuse Henry Slade got. I knew this would be a difficult piece but not for so much vitriol. Nor was I expecting after doing an above board interview to have my credibility as a journalist questioned so publicly. #BeKind pic.twitter.com/ZoaqSUFcKh

Damian McKenzie and the pundits’ reactions: Quite simply, it was a stonewall red card. McKenzie was sent off for hitting the head of Reds scrum-half Tate McDermott, leaving referee Nic Berry with little option other than to give the playmaker his marching orders. However, the Australian pundits on TV bizarrely saw it differently. The usual trope of ‘it ruins the game’ was spouted, while Michael Cheika felt the momentum of McDermott made it impossible for McKenzie to do anything differently (we’re still working out how a usually excellent analyst came to that conclusion). Ultimately, the pivot led with his shoulder, didn’t attempt to wrap, had an opportunity to take a different body position and paid the price, costing his team the chance of a victory. If Antipodeans continue to fight against the current trend in world rugby then it could cost them in big games at international level.

Red for Damian McKenzie after making direct contact to the head 🟥

Mike Brown: It never felt like the appeal was going to succeed but it was nonetheless confirmed during the week that the full-back’s Harlequins career is over after an independent disciplinary panel upheld the six-week ban. Brown was sent off against Wasps for stamping on the head of Tommy Taylor and it means he will now miss the rest of the season, even if Quins reach the final. It is a sad end for a club legend but, ultimately, the panel has to take emotion out of it and it was an extremely reckless act, which deserved the lengthy(ish) suspension it duly got.

Mike Brown has played his final match for Harlequins.

His six-week suspension following this red card against Wasps earlier this month stands after an appeal.#GallagherPrempic.twitter.com/i9UnPY1V9o

Cameron Redpath injury: The injury curse has struck the Scotland and Bath centre again and he is set to spend the rest of the year on the sidelines after rupturing the anterior cruciate ligament (ACL) in his right knee during a Premiership match against Sale Sharks earlier this month. In 2018, Redpath ruptured the ACL in his left knee and that injury ruled him out for 10 months. Earlier this year, he impressed on his Test debut against England in the Six Nations but also suffered a neck injury in that match and missed the rest of the tournament.

Everyone is behind you, @camredpath 🙏

Worcester Warriors: The Sixways-based outfit’s wretched Premiership form shows no signs of abating after they suffered a narrow 18-17 defeat at home against Leicester Tigers on Saturday. That means the Warriors have lost 17 out of their 20 matches played in the tournament. However, two of their victories came via forfeitures caused by the Covid-19 pandemic and their only on-field win was registered last November when they edged London Irish 11-10 in the opening round at Sixways. They have a points difference of -231 which means there’s plenty of work to do for director of rugby Alan Solomons ahead of the 2021/22 campaign.

A second half brace from @EllisGenge was the difference but @WorcsWarriors made it a close-fought battle at Sixways.