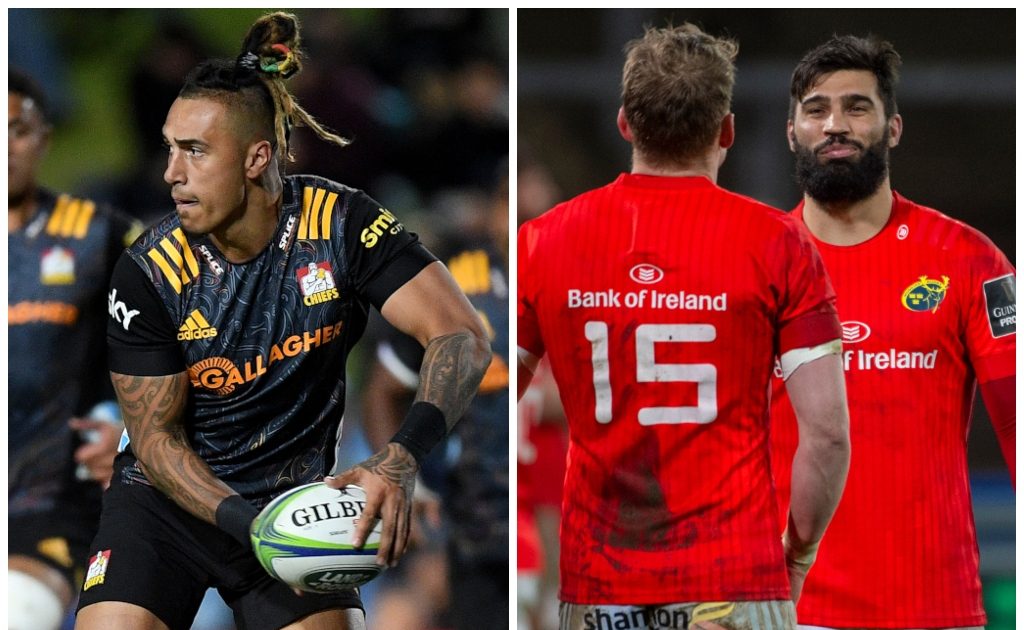 Sam Simmonds: After leaving the field with what turned out to be a not too serious ankle injury in Exeter Chiefs’ narrow Premiership win against Northampton Saints last Sunday, there was an upturn in fortunes for the in-form back-row when he was crowned the Rugby Players’ Association player of the year. Things got even better for Simmonds when he also became the first player to ever win two Premiership Player of the Month awards in one season. His excellent season has seen him break the Premiership try-scoring record and his superb form was also rewarded with a spot in the British & Irish Lions squad for the upcoming tour to South Africa. The Lions will hope his 2021 gets even better.

Your #GallagherPrem Player of the Month is Sam Simmonds! 👏

Here's the moment the @ExeterChiefs No.8 broke the record for tries in a season.

He also becomes the first player to 𝗘𝗩𝗘𝗥 win the award twice in one campaign 🎖pic.twitter.com/JEVGKOrfMj

Benetton and Bulls: Although the Italian outfit were not in action over the weekend, they have advanced to the PRO14 Rainbow Cup final after their match against the Ospreys was cancelled due to a Covid-19 outbreak at the Welsh region. Although that’s not an ideal way to make the final, Benetton deserve their place in the tournament’s marquee game – against the Bulls – as they have remained unbeaten through the league phase of the competition and it must be remembered that they have made a remarkable turnaround after finishing at the bottom of Conference B during the 2020/21 PRO14 campaign after losing 15 out of 16 matches played. The Bulls also deserve praise for progressing.

A season to remember for @BenettonRugby, and it all culminates next Saturday with a home #GuinnessPRO14RainbowCup final in Treviso 🌈🏆 pic.twitter.com/Du2M6JmCod

Sensational Ryan Baird try: The 21-year-old lock has always been a special talent and highly rated at Leinster but this was some effort against the Dragons in the teams’ final PRO14 Rainbow Cup match at the weekend. Yes, his opponents’ defensive efforts leaves a lot to be desired but Baird deserves plenty of credit for initially avoiding their attempted tackles with fantastic footwork and his ability to get into a good position to gather an offload from Jamison Gibson-Park, who was equally excellent in the five-pointer. Not bad for a second-rower!

Gavin Coombes and Sean Wainui: Four and five tries apiece for the Munster number eight and Chiefs winger on Friday and Saturday respectively as they dominated their opposition, leaving them with no answer how to contain them. With CJ Stander having moved on, it seemed like Munster would be struggling to fill the hole he would leave but it appears they have a readymade replacement in Coombes who looks a real prospect. As for Wainui, he became the first player in Super Rugby history to score five tries, which is an outstanding effort.

Super Rugby Trans-Tasman finalists: Congratulations to the Blues and Highlanders after they booked their places in the final of Super Rugby Trans-Tasman with victories over the Force and Brumbies over the weekend. No offence to the Crusaders, who actually won all five of their games in the competition, but it’s refreshing to see someone different to them in a showpiece match in the southern hemisphere as both the Blues and Highlanders hope to make it a special day in Auckland on Saturday. We have been mightily impressed with the former side in 2021 and feel it will be difficult for the Highlanders to stop the likes of Hoskins Sotutu but you can never write off the men from the south.

Fire-pit episode: One of your more bizarre stories from the last seven days came from Munster where four players – Damian de Allende, RG Snyman, CJ Stander and Mike Haley – were caught up in a “fire-pit accident” that left them with injuries. The Bok duo were reportedly most affected by burns but thankfully should be recovered for the upcoming British & Irish Lions series. However, it was surprising to read South Africa head coach Jacques Nienaber defending the pair and admitting that he’d thrown petrol on fires while in Ireland. We think all five involved in this section need some fire safety tips and hope they’ve learned a valuable lesson from this. We wish them a speedy recovery.

Damian de Allende told @BrendenNel “one of the boys threw a bit of petrol over the fire and then it caught his hand and he just tried to put it down on the floor and then the whole thing caught alight and exploded. We should be okay in a few weeks hopefully."

Jack Adams news: It was absolutely heartbreaking to read the news on Friday that former Gloucester outside centre Adams is suffering with terminal cancer. Adams was diagnosed with cancer in April and sadly treatment hasn’t been successful, with a JustGiving page having been set up to provide some future security for his family and the ex player’s favourite charity, Maggie’s Centres (Cheltenham). Adams, who played at England U16, U18 and Sevens level, has three children and we hope there is sufficient support to help them during this awful time.

Former @premrugby player Jack Adams was diagnosed with cancer suddenly in April 2021 & sadly treatment has not been successful.

This is an urgent appeal to help provide some future security for Jack's young family 👉https://t.co/GLmOtNrTGU pic.twitter.com/udO1ruvram

Another break-in: There was more bad news over the past week with Championship outfit Ampthill having been the victims of another break-in. As their tweet says, it is “mindless” and leaves the club once again having to clean up the mess left. Let’s hope these youths do get caught and are held accountable for their infuriating actions. Ampthill are seeking help to stop this happening again. Hopefully they get it.

Yet again the club has been subject to mindless vandalism! 😡

We’ve just had to remove a group of 9 or 10 youths from the first team pitch who were climbing the tower, vandalising the advertising hoardings and dug outs, plus making another mess for our volunteers to clean up! pic.twitter.com/oH0pzQmIGP

Charles Piutau blocked: It was confirmed on Friday that former All Blacks centre Malakai Fekitoa will move closer to representing Tonga at Test level when he plays for the Pacific Island nation at an Olympic Sevens qualifying tournament in Monaco. Fekitoa is one of four ex-New Zealand and Australian internationals who have switched their rugby allegiance to Tonga, but what is hugely disappointing is that full-back Piutau can’t follow the Wasps centre due to the fact Bristol Bears are in the Premiership knockout stages. As Dan Leo says, let’s hope World Rugby make an exception to the rule in this case. Wouldn’t it be great to see a strong Tonga, Fiji and Samoa in future World Cups?

Despite meeting all other criteria, Charles Piutau is unable to switch to Tonga because his club @BristolBears is in playoffs. surely @WorldRugby should consider this unique circumstance and let him play for Tonga regardless

Do what’s FAIR WR …its one of our sports core values https://t.co/FnrK4JGb6h

Ealing not landing a punch: While the vast majority expected Saracens to show their class in the opening leg of the Championship final, few would have predicted such a hiding for the Trailfinders on their home patch on Sunday. To be beaten 60-0 with eight tries being posted is such a hiding for the side that finished top of the table and looked like they were ready to dine at the top table in England. Yes, Saracens were deadly at Vallis Way as their Lions and international-filled team dominated from the outset, but for Ealing not to score a point will be eating at them and their fans as they now lick their wounds and look for a decent response at StoneX Stadium. A big reality check for them.

A tough day but we go again next week 🏉 pic.twitter.com/usY5SyTbz3