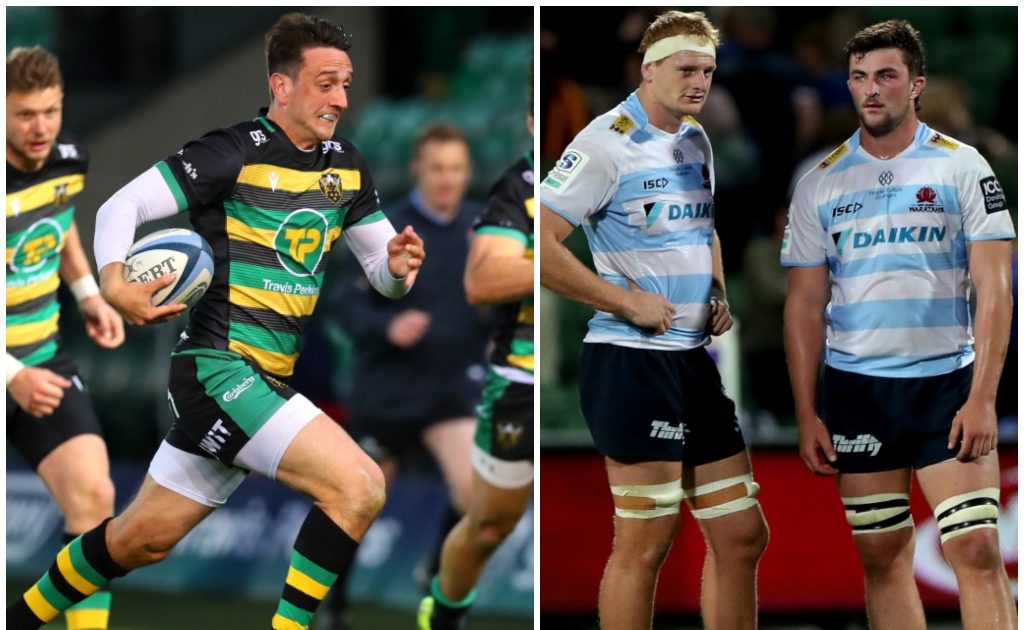 Danny Care: He may be 34 but some are quite rightly calling for the Harlequins scrum-half to be involved with the British and Irish Lions later this year. Care is in stunning form and helped boost the Londoners’ play-off hopes with another superb display as they thrashed Worcester Warriors 50-26 on Saturday. Care showed his try-scoring instincts to touch down for the opener and was at the heart of everything Quins did well at the weekend. The only question is how he fits into Warren Gatland’s game plan, which is effectively what caused his demise when in the England squad. The half-back likes the freedom to express himself and it is perhaps not a surprise that his form at Harlequins has taken a significant upturn since the departure of Paul Gustard, who was perhaps more methodical and structured in his approach. Even so, there are few better nines in Britain and Ireland at the moment.

Northampton: Chris Boyd’s charges continued with their fine recent form when they notched an impressive 44-26 victory against London Irish in their Premiership encounter at Franklin’s Gardens on Friday. That was the Saints’ second successive triumph and follows their 62-14 thumping of Worcester Warriors in Round 15. Significantly, the win over the Exiles mean they have now won nine out of 16 matches played, which is one more than what they achieved during the entire 2019/20 campaign. With six rounds of matches left to play, Boyd and his troops will be quietly confident of advancing to this year’s play-offs. Alex Mitchell and Ollie Sleightholme particularly impressed on a high-scoring night.

It’s a big bonus point win to take us back into the top four 🙌 pic.twitter.com/akpcNj4xTg

Bulls’ new signing: It has been rumoured for a long time but finally the Pretoria-based outfit announced the signing of Springbok Johan Goosen, who will join from Montpellier following the completion of the Top 14 season. Injuries have hampered Goosen over the years but, at his best, the playmaker is an outstanding talent. After a few years in the doldrums, Jake White took over the Bulls in 2020 and guided them to the Currie Cup title. There is far more positivity emanating out of Loftus Versfeld and the addition of the 13-times capped South African international is another boost.

Our worst kept secret is official: Johan Goosen is coming to Loftus! 🔥 Welcome to the #BullsFamily Goose, we’re sure you’ll fit right in 👊 Here’s a little reminder of just how insanely talented he is 💪 https://t.co/9gXqu1dD2n pic.twitter.com/ixYrWwbgW2

Pacific Island representation in Super Rugby: One of the most significant pieces of news came when it was announced that Moana Pasifika and Fijian Drua had been granted conditional licenses to take part in an expanded Super Rugby competition. It is a boost, not just for the Pacific Islands but also the game, as the sport will benefit hugely from a strong Fiji, Tonga and Samoa. There will no doubt be teething issues along the way, while Dan Leo has voiced concerns over the motives behind the decision to accept Moana into the tournament, but hopefully this can be the start of something great for the Island nations.

GOOSE BUMPS! Get set for more scenes like this with confirmation that Moana Pasifika and the Fijian Drua have been granted conditional licences to join a planned new professional competition next year.

Chiefs: After a forgetful 2020 Super Rugby Aotearoa campaign in which they lost all eight their matches, there’s been a big turnaround at the Chiefs, who claimed their fourth successive triumph of this year’s campaign after beating the defending champions, the Crusaders, in Hamilton. The home side trailed for most of that match but a strong second-half fightback paved the way to victory and they clinched the result courtesy of a 78th minute penalty from Damian McKenzie. The win was a significant one as it means the Chiefs move above the Blues into second on the table – after six matches played – and they are now seven points adrift of the Crusaders, who have played an extra game.

John Dawes’ sad passing: It was a sad day for the global game when it was revealed by his former club, Newbridge RFC, that the former Wales and British & Irish Lions captain and coach had died after a period of illness. His former international team-mate Sir Gareth Edwards hailed Dawes as “one of the giant figures of Welsh rugby of any era” and it’s hard to argue with that assessment as he reached great heights in the game. Dawes is the only man to have captained a triumphant Lions tour of New Zealand – in 1971 – and the centre also had the distinction of skippering and coaching Wales to Grand Slam titles. We wish his family and friends the best as the rugby family mourns one of its greats.

🗣️ "Our very best wishes and thoughts go out to all of John's family."

Rainbow Cup law variations: We are generally not a fan of the trials that are going on in Super Rugby Aotearoa and AU, but the ’20-minute red card’ is especially poorly thought out. We have voiced concerns over whether the sport is truly taking head injuries seriously and the decision to include it in the Rainbow Cup only increases that worry. Red cards are there for a reason; to punish a dangerous tackle but also to act as a deterrent further down the line. As a result of the clampdown in high shots, coaches are looking at ways of lowering the tackle height and that should therefore reduce concussion and head injuries. By partially taking away that punishment, you lessen the impact on the offending team or individual and it therefore gives them a reason not to change their behaviour.

Jack Goodhue and Ardie Savea injuries: After Sam Cane went down recently, two more All Blacks are set for lengthy spells on the sidelines. Goodhue’s is the most concerning, with the centre due to miss the whole of 2021 after rupturing his anterior cruciate ligament. Savea’s is not quite as serious, with the back-rower scheduled to miss up to two months of action, making him available for New Zealand’s internationals, but it is still big blow for the Hurricanes man. We wish them both all the best in their recoveries.

🗣️ "Jack Goodhue has had scans which have confirmed a significant knee injury, including an ACL rupture." #SuperRugbyAotearoa

Gloucester and Worcester: It has been an awful season for both teams and it got even worse on Saturday as they fell to disappointing defeats. On the face of it, a three-point loss to play-off challengers Sale Sharks is not a bad result for the Cherry and Whites but, when you consider that George Skivington’s men had a player advantage for almost an hour, it becomes a very different story. Had Sale kept a full complement on the field then the visitors may well have succumbed to the type of scoreline Worcester endured. Alan Solomons’ charges were in the game in the opening quarter against Harlequins but, once the hosts were fully focused on the task in hand, the Warriors had no answer. Their defence was simply abysmal and you wonder where their next win is coming from.

Who doesn’t love a training ground move!? 👏🏻@arronreed1 finished of a beauty at the AJ Bell yesterday! 👇🏻#SALvGLO | @ccibuk pic.twitter.com/gZHntR8ZZj

Waratahs: When it rains it pours and that adage seems to be holding true for one of the traditional heavyweights of the Australian game, who are finding the going tough in this year’s Super Rugby AU. Although there’s been signs of improvement in their play after parting ways with head coach, Rob Penney, the ‘Tahs are still winless – after losing all seven matches so far. They came agonisingly close to claiming their maiden win against the Force on Saturday but were denied by an injury time penalty from Domingo Miotti, who clinched a 31-30 triumph.