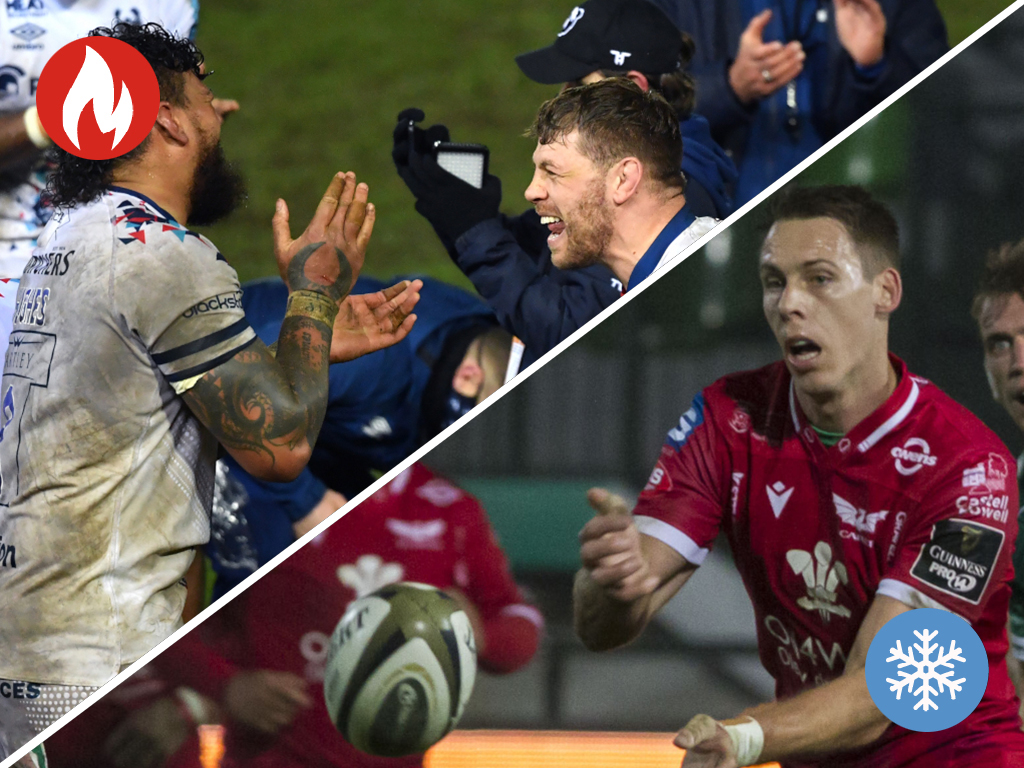 Bristol Bears: They very much look like genuine challengers for the title after producing a superb display to overcome defending Premiership champions Exeter Chiefs 20-7 on Saturday. Despite suffering a number of injuries at the start of the season, Pat Lam’s men battled through that period and showed their true quality at Sandy Park. They are renowned for a ball in hand approach but, as Lam stated, the Bears are more than that nowadays. Bristol were physical up front, controlling the set-piece battle in the second half, and deservedly moved to the top of the table.

You can always rely on @radradra_semi 👊

Jordan Larmour return: Leinster and Ireland fans would have been punching the air when the former announced Larmour in their starting line-up to take on Ulster in the PRO14 on Friday night. The 23-year-old has proven time and again in his still young career that he can unlock defences at will, and with Leinster going into the game on the back of a shock defeat to Connacht that ended their fine winning streak, his return was just the tonic they needed. As expected, the wing played his part in Leinster getting back on the horse with a 24-12 victory and now he will look to build on that comeback performance in the coming weeks.

Jordan Larmour looked very sharp on his return from a shoulder injury.

Paolo Odogwu: Lee Blackett has done a remarkable job at Wasps and his influence has arguably been best seen in the likes of Odogwu. Effectively discarded by Sale Sharks, where he was a peripheral figure in the squad, moving to Coventry has reignited his career and he could well be putting himself in the frame for international honours. The wing or centre, who featured for the England U20 side, is eligible for either the Red Rose or Italy and served notice of his credentials by ripping through Bath in the 52-44 triumph. After a fine start to the campaign, he produced his best performance by scoring twice, setting up another with a searing run and finishing with 142 metres gained.

Zebre: The Italian outfit have found some form as, after impressing in the Challenge Cup against Brive and Bayonne, they defeated intra-country rivals Benetton for the second successive week. Following an excellent 24-15 victory away from home, they saw off the same team on Saturday for their third victory in the PRO14 this season. Michael Bradley’s men are still second-bottom in Conference A, but this will give them huge confidence going forward.

Paul O’Connell back with Ireland: This news came as a surprise but it is certainly a smart move from the Irish Rugby Football Union and head coach Andy Farrell. While lacking in coaching experience compared to others around the world, what O’Connell commands in droves is respect, which can only benefit Ireland moving forward. The former Munster, Ireland and British & Irish Lions has an aura about him and should help the Irish fix their recent lineout woes and also be a wonderful role model and teacher for the likes of youngster Ryan Baird and also a maturing James Ryan. All the forward pack should act like sponges when O’Connell speaks and Farrell clearly sees him as a key addition, hoping that he is “another strong voice and leader within the group”.

This is a great move for Ireland and for Paul O’Connell.

Andy Farrell has recognised Ireland’s lineout struggles and is tapping into a massive amount of intellect.

O’Connell spent time in camp during last year’s Six Nations and made a big impression on the players and coaches. pic.twitter.com/RTvzL2SD6d

Liam Williams, Kyle Sinckler and Josaia Raisuqe: All three will want to forget the weekend in a hurry after finding themselves in hot water with the respective referees. The trio in some way or form disrespected the man in the middle, with two receiving their marching orders. Williams saw red for leading with the head at a ruck before promptly and rather petulantly suggesting they go and play touch rugby. While the Welshman didn’t attempt a clearout with much force, it was reckless, stupid and unbelievably ineffective, considering the victim of the act was not interfering at the breakdown. Then there was Sinckler, who swore at the referee and was fortunate to escape sanction, and Raisuqe, who bizarrely lifted Laurent Millotte a la the Lion King. The wing was celebrating his team Nevers holding on to a 30-25 win over Beziers on Friday, but Millotte understandably took exception and sent him off. It was a bit of fun and made plenty of people laugh around the world, but it was perhaps inadvisable.

Duhan van der Merwe move: We don’t begrudge anyone for leaving for more money when playing rugby is such a short career, but it is rather depressing to see someone complete their residency period and then simply leave. Thankfully, the qualification has now increased from three to five years, which will hopefully prevent people, clubs and countries exploiting the system. However, Van der Merwe has done just that, leaving Edinburgh just weeks after making his Scotland debut and joining Worcester Warriors. It appears a backwards move, given that Worcester are perennial strugglers in the Premiership, but no doubt the wing won’t mind when he has increased his earnings significantly.

It does grate a little that he leaves so soon after qualifying for Scotland, and to a team that has never finished above eighth in the Premiership. For Worcester, he will be a stupendous signing. For Scotland's pro-teams, things will get worse before they get better.

Covid worries: On the week the Champions and Challenge Cup are set to resume, we’re still no clearer on whether the French teams will be involved and if their absence would mean a postponement of the competitions. That pretty much sums up the uncertainty surrounding rugby union at the moment, with doubts also hovering over the Six Nations and British & Irish Lions tour. Of course we sympathise with the situation around Europe and indeed the world right now and accept it must be safety first because of the surging cases of coronavirus, but it’s such a shame that we could see flagship tournaments and tours possibly called off. Fingers crossed that doesn’t happen.

Just how might it all fit in if European action is postponed?

What is the knock-on effect? Will the Lions tour be sacrificed?#RugbyTonight pic.twitter.com/0dM6ExSYR2

Benetton: While we praised Zebre, questions should equally be asked of their Italian rivals, who have yet to win in the PRO14 this season. Their latest loss means that they have succumbed in nine successive matches, leaving them rooted to the foot of Conference B. Benetton were once the standard-bearer for rugby in the country, finishing in the play-offs for the first time ever in 2019, but they have gradually declined since then.

Cardiff Blues upheaval: Williams’ aforementioned sending off helped in part end what has been a tumultuous week on something of a positive for the Blues as they picked up a much-needed win over a 14-man Scarlets outfit to lift spirits. After players were told on Monday, the departure of head coach John Mulvihill was only finally confirmed to the press on Thursday – days after BBC Sport in Wales had revealed his exit – which is messy to say the least. Former Wasps boss Dai Young has been named as his successor on an initial interim basis, again a surprise in terms of deal, but unfortunately for their fans this is just another episode of instability and turmoil at the region.