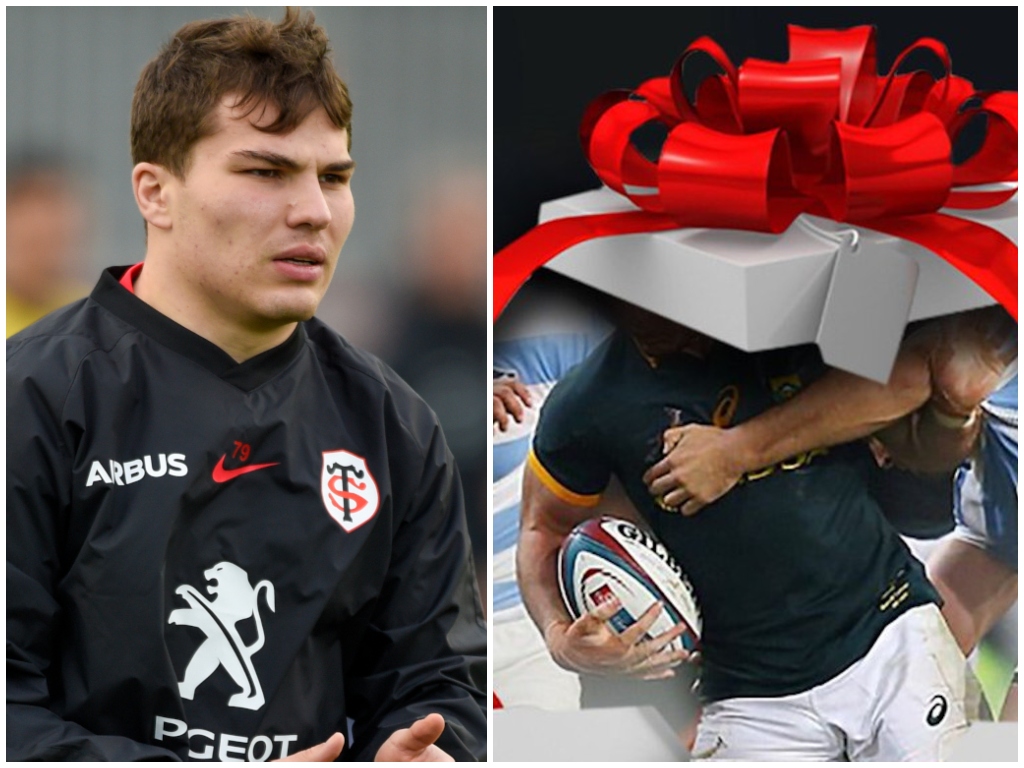 Antoine Dupont try: We knew he was good but this bordered on the ridiculous from the France international. The Toulouse star scored a wonderful solo try on Sunday as he carved through the Bordeaux-Begles defence when seemingly nothing was on. Starting from almost his own half he made the UBB tacklers clutch little but air as he side-stepped, showed searing pace and then finished strongly near to the posts. Put simply, he’s the best scrum-half in world rugby at the moment and this proves why.

🎁 Antoine Dupont has a special gift for us all this Christmas! pic.twitter.com/nqNx1ewGpk

Ulster win again: That is now nine wins out of nine to start the PRO14 season as Dan McFarland’s charges continue to set the pace in the competition, albeit with Leinster and Munster having two games in hand. Their latest victory saw them come from behind to defeat a strong Connacht outfit at the Sportsground, this result all whilst star player, Marcell Coetzee, was the subject of a public switch to the Bulls in the media. One has to take your hat off to how they have started the campaign.

Rainbow Cup: It’s not often we get overly excited about more rugby on the schedule, adaptations or expansions of tournaments. However, this is something we can genuinely get behind as the Rainbow Cup is a brief competition that will run from April 17 until June 19 and sees the PRO14 sides take on the Bulls, Lions, Sharks and Stormers of South Africa. For years now the time zone issues have been a negative of Super Rugby so a move to the north appears the logical step for those in the Republic. Yes, the Southern Kings and Cheetahs dipped their toe and the experiment proved unsuccessful but this end-of-season showpiece should prove a success.

Mike Adamson: We couldn’t quite believe this when it broke last Wednesday but Adamson’s appointment in the 2021 Six Nations is the first time in 19 years that Scotland will have an official refereeing in the Championship. Adamson is set to be in the middle for the England v Italy fixture at Twickenham on February 13 and he was clearly delighted with the news, telling BBC Sport: “Getting an appointment like this feels similar to being a player selected for the team.” Why there has been such a shortage of referees in Scotland coming through the ranks is surprising, but the country will get right behind their man early next year.

Mike Adamson has been appointed to officiate in the upcoming 2021 Guinness Six Nations tournament, making it the first time in 19 years a Scottish referee will take charge of a men’s Six Nations fixture 👇https://t.co/lalhTkLSw6

Steven Luatua and Bristol: The Bears recorded a 27-19 victory at Harlequins in the Premiership on Boxing Day, but the bonus-point win didn’t look on the cards in the first period as Quins led 9-0. Step forward Luatua as he led the fightback for his troops with help from the likes of livewire scrum-half Harry Randall. It was Luatua’s try that gave the Bears the lead for the first time, but he also helped set up Dan Thomas for his score in a superb showing from the All Black that inspired the win.

Luatua is such a switched-on player.

Catches the short lineout to get the ball rolling and then the quick penalty pass to score.#HARvBRI pic.twitter.com/Ufu06QajG8

Bulls blunder: The Bulls were definitely Ulster’s Christmas grinch over the weekend as the South African team’s social media account all but unveiled a pending signing in Marcell Coetzee. His face hidden only by a present in their post, it didn’t take long for those on computers or phones to do a search for the original picture of the game between the Springboks and Argentina to uncover his face. Ulster decided to put out a press release of their own 24 hours later to confirm Coetzee is heading back to South Africa at the end of the campaign, but CEO Jonny Petrie is “deeply frustrated” with the under contract player and Bulls over the move.

Sale Sharks: That is now three defeats on the spin since Paul Deacon took over the reins, following Steve Diamond’s shock departure for “personal reasons”. The latest loss came in the Premiership on Sunday as the Sharks went down to a 26-23 negative to Wasps at the AJ Bell Stadium and there’s since been questions asked of his players by Deacon as he looks for answers in turning around the club’s fortunes. One feels all is not peachy in Salford right now and another defeat in their next fixture, away to Gloucester, would be disastrous as they look to avoid falling off the pace in the Premiership, like they have in the Champions Cup.

Concussion numbers: The severity of concussion in English rugby is at an all-time high, that’s according to the latest figures published by the national governing body last week. Data released by the Rugby Football Union for the 2018/19 season shows players were sidelined for an average of 22 days after suffering concussion during a game. That figure is higher than at any point since statistics were first recorded in 2002, 10 days longer than the mean absence of 12 days per concussion. This is concerning especially with rugby recently coming under the microscope after six former players began legal action against the sport.

More than a fifth of elite rugby union players in England had concussions in 2018-19. Story: @gerard_meagher https://t.co/xz9EZ2TbIZ

Jurie Roux case: Returning to South Africa and it was reported last week that South African Rugby CEO Roux has been ordered to repay a staggering R37 million which he apparently misappropriated from Stellenbosch University. An arbitrator found he, “without authorisation”, moved the amount to the University’s rugby club from a period between 2002 and 2010. Roux and SA Rugby could appeal the outcome of the arbitration process, while the University could still lay criminal charges against him as it’s also alleged he tried to “conceal his tracks” as head of student finances. SA Rugby has referred the matter to their legal advisers with this a story that has not gone away for Roux.