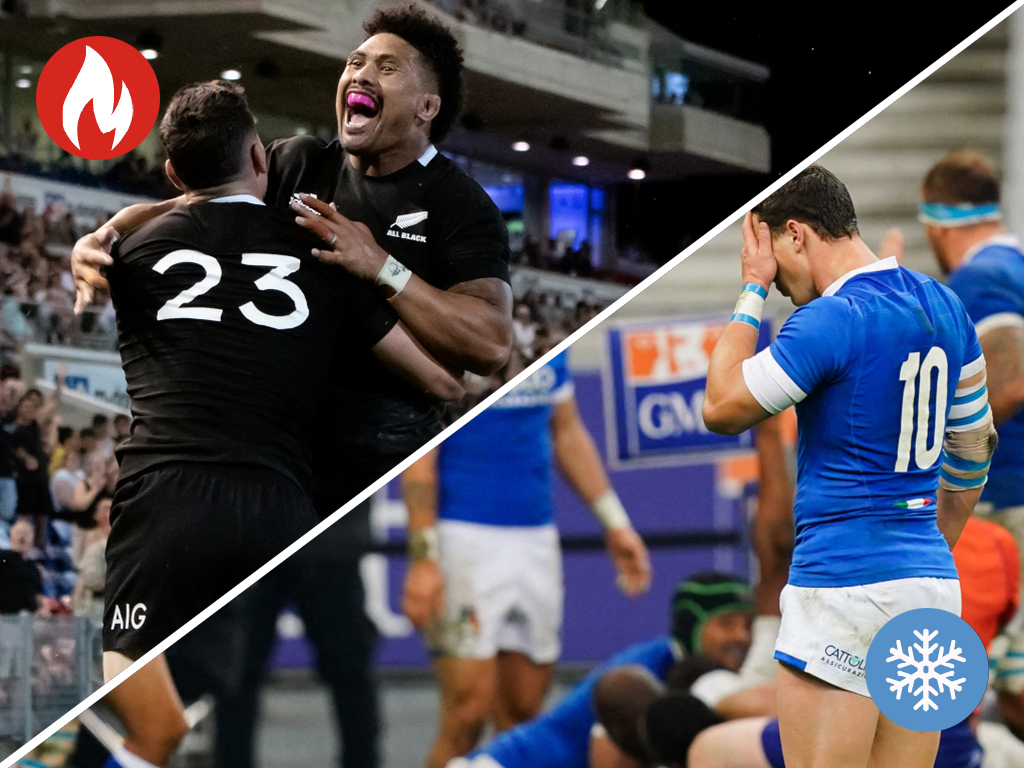 New Zealand and Will Jordan: After losing their two previous Tests against Australia and Argentina, the three-time world champions were under plenty of pressure ahead of the rematch with the Pumas on Saturday. It took them a while to break down the Argentinians – the half-time score was 10-0 in the All Blacks’ favour – but once they hit their stride in the second half, there was no stopping Ian Foster’s outfit as they sealed an emphatic 38-0 victory. Jordan, who was only playing in his second Test, was brought on during the final quarter but despite limited time, he made a big impact on this match as he crossed for two well-taken tries which also secured a crucial bonus point for his team.

Two in two minutes. On yah Will 🤟

England and France: Congratulations to these two sides, who secured their place in the final of the Autumn Nations Cup. Both teams are still unbeaten, albeit France’s opener against Fiji was cancelled, and they will face off at Twickenham next weekend. England got the job done in Llanelli, overcoming Wales 24-13, while an inexperienced Les Bleus squad were impressive against Italy. However, it is a real shame that Fabien Galthie is unable to call on his best 23 for the clash in London and the Red Rose will, as a result, be heavy favourites for the meeting.

Newcastle Falcons: Many wrote them off at the start of the season but they have already defeated two sides that finished in the top five in 2019/20 in Bath and Sale Sharks. Their first victory was impressive but the Falcons’ home triumph over the Sharks was perhaps even more so, given that they were effectively facing a fully-loaded Sale team. It was a pretty turgid affair but full credit to Newcastle, who showed heaps of composure to win the game at Kingston Park in the final minute when the veteran Toby Flood touched down to snatch a deserved victory.

What a finish to the game!@FalconsRugby sneak it at the end as Toby Flood's try wins it with the final play 😤

Tasman: New Zealand’s youngest provincial union have done it again! After winning their maiden Mitre 10 Cup Premiership title last year, the Mako were crowned champions in 2020 after beating their more fancied opponents, Auckland, 13-12 at Eden Park on Saturday. As the scoreline suggests, this was a nail-biting affair and the result was in the balance until the final whistle. Despite the narrow winning margin, Tasman deserved their triumph as they scored the only try of the match and All Blacks full-back David Havili was their hero as he slotted the match-winning penalty in the 70th minute. The result is a momentous one for Tasman, who were only established in 2006, as they become only the second team – after Canterbury – to win back-to-back Premiership titles in New Zealand’s provincial competition. Well done to them.

The death of Christophe Dominici: The world of rugby was utterly stunned when it was announced that the France legend had died from apparent suicide. Dominici was an incredible player for Les Bleus, earning 67 caps and scoring 25 tries, as he became a feature of their side from 1998. The wing was also remembered for his part in one of the great World Cup matches when France shocked New Zealand 43-31 at Twickenham. He helped instigate the comeback, crossing in the second period as they scored 33 unanswered points from 24-10 behind.

Tyrel Lomax: The All Blacks front-row was yellow carded during the closing stages of his team’s one-sided victory against the Pumas in Newcastle but he will be very relieved as his offence could easily have been a red card. The 24-year-old received his marching orders for making contact with Lucio Sordoni’s face as he tried to clean out a breakdown and it’s baffling that referee Nic Berry and television match official Paul Williams were so lenient when issuing their punishment. Surely it’s a clear red under current laws. Are we missing something?

Why isn’t that a red? pic.twitter.com/XsIxeFmksg

Italy: You sensed they had a real opportunity against a severely weakened France line-up, but the Azzurri were once again put to the sword. Franco Smith’s men did score a nice try in the first half, but mistakes pervaded their play after the break and the hosts capitalised. Although they have found some talented players, with Marco Zanon particularly standing out during the Autumn Nations Cup, losing by 31 points to a Les Bleus team shorn of their star players is not acceptable. A good performance against a struggling Wales outfit is crucial this weekend.

✍️ Read how they set up #AutumnNationsCup final with England. https://t.co/dWBvdfmpr5

Northampton Saints: In a start to the Premiership campaign that has thrown up a few surprises – Gloucester hammering Wasps being one – there has been a constant in the shape of Northampton’s form. Chris Boyd’s men look worryingly poor in pretty much every area as Harlequins went away from Franklin’s Gardens with a dominant 49-29 victory. The Saints were abysmal defensively, shipping six tries as Quins found a number of gaps in the hosts’ rearguard. Having also succumbed to Sale Sharks in Round One, questions are being asked of director of rugby Boyd, who only recently signed a new contract at the Premiership club. Improvements are needed and fast at the Saints.

The record extends to eight.

Who gave this lot new contracts the other week?

It’s matches like today when you question whether the players want it enough. Only saw hunger from Ludlam…