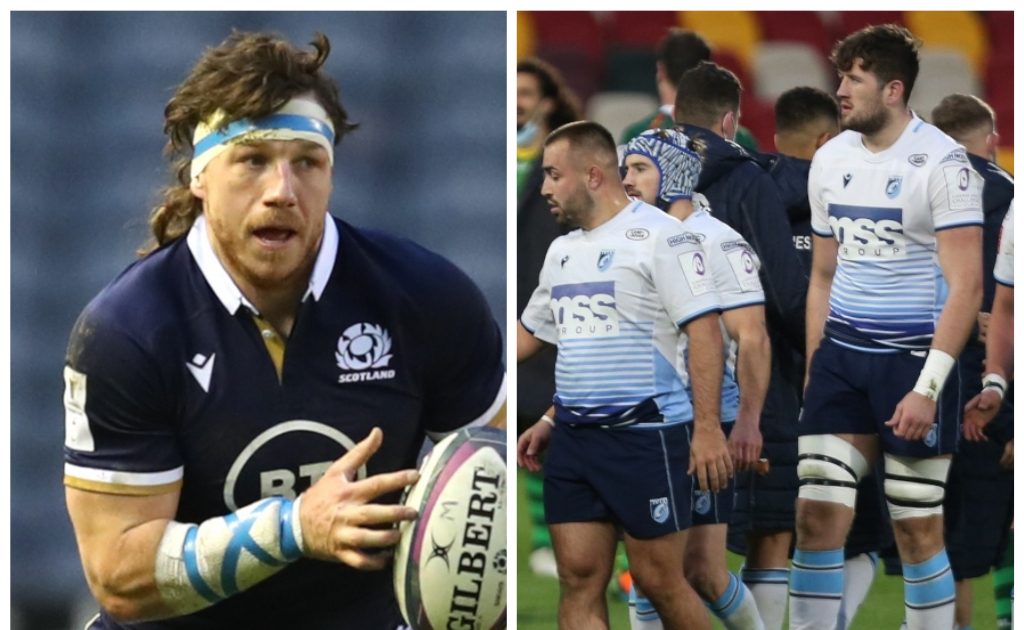 Champions Cup last-16 games: What a fantastic weekend of European club rugby it has been. From Friday through to Sunday we’ve been treated to a feast of top quality action that has seen high scores across the vast majority of matches. La Rochelle were superb to begin the knockout round before Wasps and Clermont, Munster and Toulouse and Exeter Chiefs and Lyon kept us on the edge of our seats throughout. Sunday wasn’t quite as dramatic but there were three excellent performances from Racing 92, Bordeaux-Begles and Sale Sharks. A word too for the French teams in general, who have a remarkable five sides in the quarter-finals.

With plenty of history between them, @Munsterrugby v @StadeToulousain did not disappoint 🤩

The Irish province built before the back-and-forth battle began, which the French side eventually claimed ⚔️#HeinekenChampionsCup highlights ⤵️ pic.twitter.com/jqvf0SZ9CZ

Highlanders: You would have been hard pressed to find anyone predicting the Highlanders would win at the Crusaders in their clash on Friday. In a week that saw six of their players disciplined for breaking team protocols, facing New Zealand’s best team on their home patch was predicted to be a cakewalk for Scott Robertson’s men. However, the side from Dunedin pulled out a performance for the ages as they sealed a 33-12 victory thanks to tries from Billy Harmon, Michael Collins and Connor Garden-Bachop, with Mitch Hunt impressing with the boot. Some bookmakers had the Highlanders around 20-point underdogs so to get a result by that amount of points is quite the upset from Tony Brown’s outfit, who can take so much from the game in Christchurch into their remaining matches.

🇳🇿 What a performance that was from the Highlanders! #CRUvHIG

Hamish Watson: Hats off to Hamish. The Scotland international flanker further pushed his claims for a starting jersey in the 2021 British & Irish Lions series as he picked up the Six Nations Player of the Championship gong on Friday. Seeing off the impressive Antoine Dupont, Louis Rees-Zammit, Taulupe Faletau, Robbie Henshaw and Tadhg Beirne, Watson scooped the prize with 35% of the 125,000 votes. It was great that Stuart Hogg surprised him with the award via video.

#GuinnessSixNations Player of the Championship 🏆

This is how he found out he’d won the award 👀 pic.twitter.com/RrA8M6xBXM

Marcell Coetzee: He might be leaving Ulster to join the Bulls but the Springbok back-row will live on long in the memory of the Irish province’s supporters as he certainly made a huge impact during his five-year stint at the Kingspan Stadium. The 29-year-old was at the forefront of Ulster’s onslaught in the PRO14 and although they failed to reach that competition’s final, his efforts were rewarded when he was voted as the tournament’s best player by his peers.

Reds: Whisper it softly but Brad Thorn is building something special down in Brisbane. There were signs last season that they would become a great team when they had a fine run to the Super Rugby AU final but they were beaten by the Brumbies. The Reds have definitely improved in 2021 and players like stand-in skipper James O’Connor, Taniela Tupou and Hunter Paisami were in fine form as they claimed a deserved 44-19 win over the Rebels in Melbourne on Saturday. That result was their sixth win in as many matches and they are sitting pretty atop the standings with 28 points – four more than their closest rivals the Brumbies.

The unbeaten Reds are on top of the Australian Super Rugby ladder after Round 7⃣. 🔥#9WWOS #SuperRugbyAU pic.twitter.com/hzAdQ4EtY9

Leinster v Toulon cancellation: Just a few hours before this much anticipated clash was due to start, it was called off by Champions Cup organisers following a positive Covid-19 test in the Toulon squad. As a result, Leinster went through to the next round where they will face Exeter Chiefs in the quarter-finals. However, the French outfit were not happy, saying that the EPCR let them travel to Dublin prior to making the decision, while the rest of the squad actually tested negative on the Thursday. You can understand their frustration but it is slightly ironic, given that Toulon refused to face the Scarlets in the pool stages in December – not long before the game was due to start – after a single positive had been found in the Welsh region’s camp. The main thing, though, is that the individual in question is healthy and there is no outbreak in the Toulon squad.

🗣️ "It’s disgusting, the player tested positive on Wednesday and immediately isolated. The EPCR was immediately informed, but let us go to Dublin."

Sam Cane injury: The All Blacks are set to be without the services of their captain for a significant chunk of the 2021 international season after he was ruled out for between four and six months with a pectoral muscle injury. The 29-year-old sustained the injury during the Chiefs’ Round Five Super Rugby Aotearoa triumph over the Blues and the Hamilton-based outfit will be without their back-row for the rest of the campaign. Cane undergoes surgery next week and if he is sidelined for a the full six months, he will miss the Rugby Championship which is set to be held during a September-October window. Such a shame for the player.

🗣️ "As All Blacks captain, he will still play a key role in our planning for the 2021 season, and we look forward to him returning to the footy field."

From heroes to zeros: Well, not quite, but a week after the national team won the Six Nations, the Welsh regions were left stunned as all four sides were ousted in their round-of-16 ties. First up were Cardiff Blues, who were 32-20 ahead against 14-man London Irish in the Challenge Cup but somehow contrived to concede three late tries and succumb 41-35. The Ospreys also found themselves in a commanding position, going 14-0 in front, but would eventually go down 28-24 to Newcastle Falcons. However, the biggest implosion came from the Dragons, who at one stage led 32-17 versus a Northampton Saints outfit down to 13 men. The Saints remarkably – and crucially – scored a try during that period, which kept them in the contest and they ended up winning 43-39 following two late tries. To make matters worse, the Scarlets were utterly smashed by Sale in the final Champions Cup game of the round. A weekend to forget for the Welsh.

The Dragons were 19 points up when I sent this. I just knew. https://t.co/RuTP7NtR05 pic.twitter.com/l8tGDcNhOe

Harlequins’ treatment of Mike Brown: In a tell-all interview, the former England full-back revealed how his 17-year career at the Londoners came to a rather sudden end. While loyalty is hardly in abundance from either club or player during the modern day game, the fact that the conversation over his future lasted just a few minutes, with seemingly no real appreciation as to what Brown had done for the club, is very poor from Quins. The 35-year-old was desperate to remain in the capital and it almost makes it worse that they eventually went back to Brown to offer him a new deal – when his outstanding form made it almost impossible not to. However, by then, he had already agreed a contract with Newcastle, leaving Harlequins supporters rightly furious as to how their club had handled the situation.

Joe Wheeler error: The former Highlanders lock and now pundit is known for his comedy value but on Friday that took a significant wrong turn as he made fun of Japan international Kazuki Himeno and his supposed inability for him to pronounce the letter R. There was understandable complaints from viewers and he has since apologised for the moment via his Twitter account. One hopes Wheeler learns from this and realises he must be more responsible when holding the mic.

Tonight I stuffed up! I've spoken with @teikyo_8 (Kazuki Himeno) and apologised to him and the @Highlanders and our Sky crew.I absolutely accept this is not the standard expected of the sideline team.I've got some work to do obviously,but I'm absolutely committed to doing better.