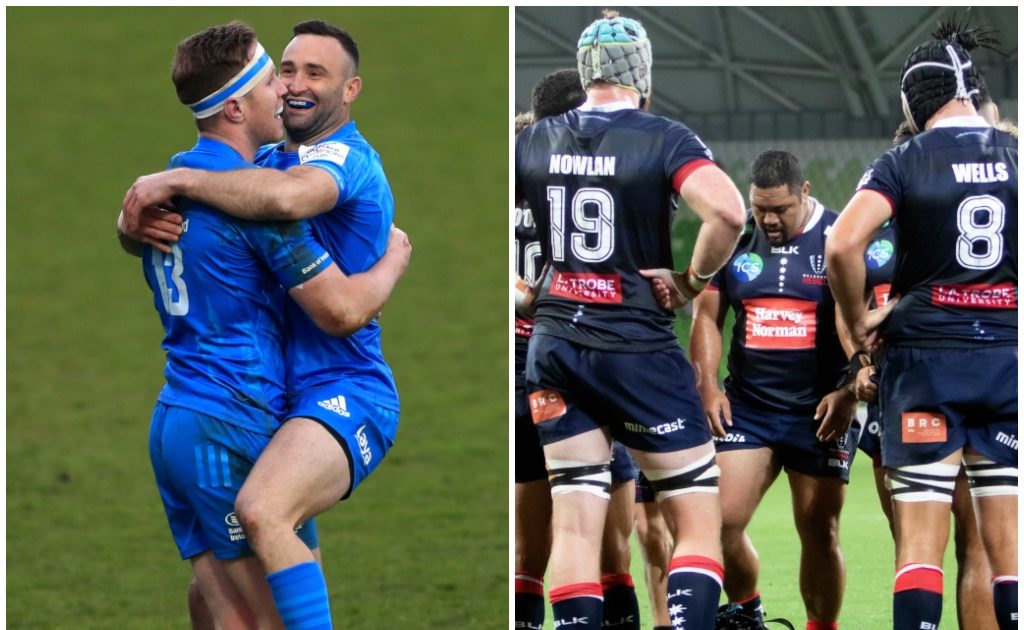 Leinster: The Irish province are still on course for their fifth European Champions Cup title after clinching an impressive 34-22 triumph over against Exeter Chiefs at Sandy Park on Saturday. Although the home side were fastest out of the blocks and raced into a 14-0 lead inside the opening 10 minutes, Leinster soaked up the early pressure and, despite losing their captain Johnny Sexton – who failed a head injury assessment – they soon took control of proceedings to lead 20-14 at half-time. Leo Cullen’s troops continued to hold the upper-hand after the interval and duly sealed a deserved win, ending Exeter’s reign as champions.

La Rochelle and the Top 14: It was a great weekend for French clubs in Europe’s Cup competitions and they will be well represented in the Champions and Challenge Cup’s semi-finals which will be held early next month. La Rochelle led the way with an impressive attacking performance, running in six tries during their 45-21 demolition of Sale Sharks. The situation improved as the weekend progressed with Bordeaux-Begles also advancing to the last four courtesy of a narrow win over Racing 92 and Toulouse got the better of Clermont in the final quarter-final on Sunday. That means there will be three Top 14 sides in that tournament’s semi-finals. Meanwhile, Montpellier also advanced to the Challenge Cup’s last four stage after their triumph over Benetton.

With the opening spot in the semis up for grabs, @staderochelais stepped up 👊@SaleSharksRugby were in it up to half time but the French side turned on the style to make their first semi-final ⚓️#HeinekenChampionsCup highlights ⤵️ pic.twitter.com/aFLdAG1TAU

Damian McKenzie: It was a case of cometh the hour, cometh the man as the All Blacks full-back held his nerve to land a long-range penalty to clinch a 26-23 golden point victory for the Chiefs over the Highlanders in Dunedin. The result was a significant one as it is the first time that a match was decided in that fashion in New Zealand and McKenzie deserves plenty of credit for, once again, being his team’s hero. His heroics follows impressive performances in the Hamilton-based outfit’s triumph over the Blues – when he scored the match-winning try – and against the Hurricanes when he played a leading role to help end his team’s 11-match losing streak.

Resilient Western Force: The Perth-based outfit took another significant step on their return to Australia’s top-tier by claiming a narrow 16-15 triumph over Melbourne Rebels on Friday. It was a pretty awful game but still a significant win for the Force, who have now won two matches this season. After falling to eight successive defeats in 2020, this is proving to be a much more positive season. There is enough quality in their squad to see them compete while there is evidently plenty of spirit in their squad as a late converted try from Tim Anstee helped them to edge past the Rebels.

Matt Philip signing: In a huge boost to Australian rugby, talented lock Philip has decided to return following a short stint in France with Pau. After a series of impressive performances for the Rebels in Super Rugby over the years, the second-row finally became a fixture in the national squad, making four appearances for the Wallabies in the Rugby Championship. The 27-year impressed, particularly during their 24-22 triumph over New Zealand in November. He should be coming into his prime and will add both quality and depth to the lock position.

🗣️ "Matt’s return will add further competition to our second-row stocks this year and as we keep on the journey to the Rugby World Cup in 2023."

Quade Cooper’s radical suggestion: The former Wallaby fly-half raised eyebrows when he suggested that Australia and New Zealand Super Rugby teams should consider making a switch to play in a Japanese competition. In theory, his radical idea could work perfectly as there isn’t a big difference in the aforementioned countries’ time zones. Cooper has also said that the standard of rugby in Japan is strong enough to accommodate teams from the Antipodean countries but that statement is debatable. Although there are several New Zealanders, Australians and South Africans plying their trade at club level in Japan, that was also the case when the Tokyo-based Sunwolves competed in Super Rugby for four completed seasons and they only won eight out of 62 matches during that period.

🗣️ "We put the Sunwolves in, and it wasn’t the best experience. But the fan base here is amazing, the strength of the companies is amazing."

Panicked Exeter: It is understandable, given the 2020/21 campaign began just a month after they completed their double success, but they haven’t quite been themselves this season. The Chiefs are still a mightily impressive outfit and for us remain the best team in England, despite the excellence of Bristol, but they just didn’t have the composure to beat four-time winners Leinster. Although the physicality and intensity was there, something which has been lacking at times this year, Exeter lacked that calmness under pressure. The hosts were nine points in arrears going into the final 10 minutes but had a penalty in front of the posts. While they are impressive from five metres out, closing the gap to within seven points would have potentially put Leinster under duress going into the latter stages. The Irish province, after a difficult opening, were deserving victors, but there was some surprisingly poor decision-making from the hosts.

"We went into meltdown mode a little bit too early.

"If we want to become a really good side and consistent in Europe, we must learn from today."@ExeterChiefs DoR Rob Baxter credits Leinster following a thrilling European encounter.#HeinekenChampionsCup pic.twitter.com/f0OdvfuBav

Rainbow Cup’s rumoured cancellation: So that’s it then for the majority of the PRO14 sides this season? According to those in South Africa, the Rainbow Cup will now not go ahead due to issues with getting clearance from the UK government. Four South Africa teams are set to join an expanded PRO16 but this was arranged as a precursor to that new league. It was also designed to be a money-spinner because of the financial impact of the coronavirus pandemic but, should the cancellation be confirmed by the relevant authorities, it will harm those involved. There is obviously the fiscal issue but it is also not great for the South African teams, who were hoping to use this as preparation for the British and Irish Lions tour.

To clarify. SA are not ‘pulling out’ of the Rainbow Cup as seems to be the message doing the rounds.

They’ve been given travel clearance by most governments but not the English government. They had planned to base themselves in Bristol. So it’s Westminster who have blocked this

Rebels: The Melbourne-based outfit have often threatened to reach the top of the Australian game over the past few years but have just fallen short. Heading into the 2021 campaign, once again you felt they would challenge the Brumbies and Reds for top spot, but they have been poor and that culminated in an awful display against the Western Force. Dave Wessels’ men struggled for any fluency in attack and were eventually punished when the visitors scored a late try. There is plenty of talent in the Rebels’ ranks but they are simply not performing.

Jake Ball’s non-citing: Rugby’s inconsistent officiating came to the fore last week after the Scarlets second-row somehow escaped punishment. Many were left stunned when Ball did not see a card for connecting with the head of Sale Sharks’ Faf de Klerk during the Welsh region’s heavy 57-14 defeat in the Champions Cup. Despite the officials remarkably deciding not to take action immediately after the incident, a citing seemed inevitable since it’s the type of collision the sport is apparently trying to stamp out. Staggeringly, no charge came and it rather makes a mockery of rugby’s attempts to clamp down on these sorts of tackles. When you see some of the unfortunate incidents over the past year, which have correctly resulted in yellow and red cards due to the way it is now being refereed, you scratch your head when things like this are overlooked.

🏴󠁧󠁢󠁷󠁬󠁳󠁿 Jake Ball has NOT been cited for this hit on Faf de Klerk. Interesting…🤔pic.twitter.com/lLORdEwzHR

World Rugby’s eligibility laws: Pacific Rugby Players Welfare chief Dan Leo has consistently called for the governing body to alter the laws to allow players who have earned caps for tier one nations to be able to feature for tier two sides if they are out of the equation for their chosen country. It seems a sensible move that would of course benefit the Pacific Islanders, who contribute significantly to a number of international teams. Charles Piutau is one of those who, having garnered 17 All Blacks but not featured for them for over five years, fits the bill perfectly. Now, there is a loophole which allows players to switch countries but it involves them playing in a Sevens qualification tournament in Monaco later this year. That clashes with the northern hemisphere season, which means it is highly unlikely that Bristol’s Piutau will be allowed to take part and therefore qualify for Tonga. It is both bizarre and frustrating as the world game would significantly benefit from the Pacific Island nations being more competitive.

Current eligibility laws aside- who would feature in your Invitational Pacific Island XV’s (based on heritage & ancestry)?