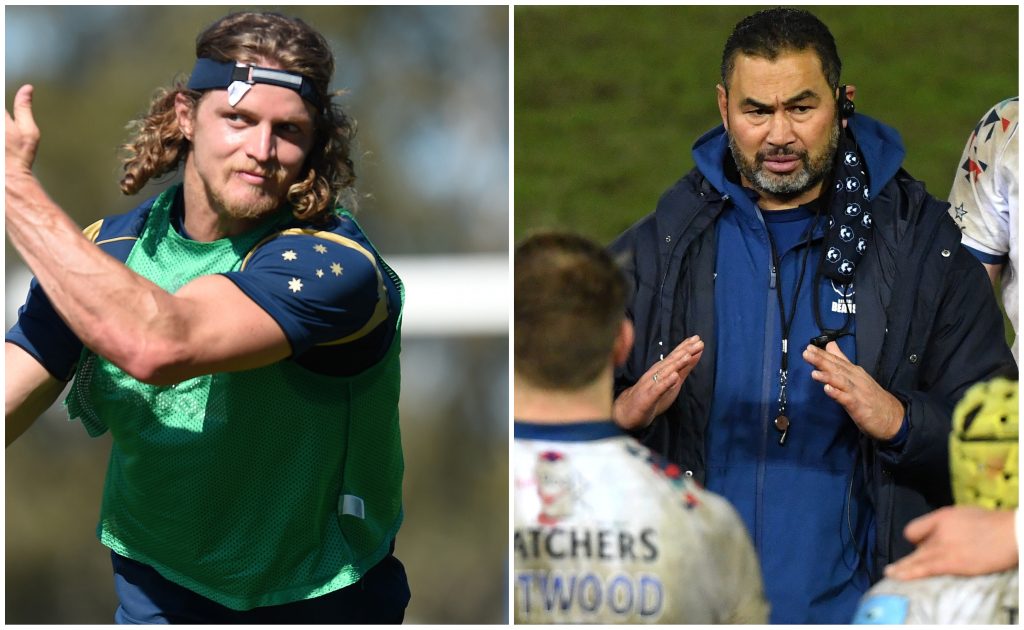 It’s time for our Monday wrap of who has their name in lights and who is making the headlines for all the wrong reasons this past week.

All Blacks wrap up the silverware: It wasn’t pretty but New Zealand will be pleased that they got the job done when they had to dig in against South Africa in Townsville on Saturday. Their 19-17 victory saw them tough it out against an opponent that rarely chanced its arm and, as is their wont, they were regularly keen to slow the game down whenever possible. The All Blacks managed to get their noses in front at full-time, though, thanks to Jordie Barrett’s reliable boot and that gave them their fifth win in this year’s tournament, which secured the title.

England newbies: Eddie Jones sprung a surprise when he named eight uncapped players in England’s 45-man training squad ahead of their upcoming internationals against Tonga, Australia and South Africa. Mark Atkinson, Jack Kenningham, Louis Lynagh, Gabriel Oghre, Raffi Quirke, Sam Riley, Bevan Rodd and Ollie Sleightholme are the newbies in the squad and all have been in fine form for their respective clubs. Jones has received plenty of criticism in the past for keeping faith with a core group of players while overlooking those outside of his squad who were delivering excellent performances, but he must be commended for bringing in fresh blood and hopefully some of the new players will earn Test debuts later this year. With Marcus Smith likely to be directing matters, could we see a more attack-minded England?

🧨 Louis Lynagh exploded into the second-half, setting up Tyrone Green just after the break.

Wallabies go three in a row: Following the disappointing efforts against the All Blacks, they have responded well and now look a very decent side indeed. The return of Samu Kerevi and Quade Cooper has made a difference but their decision-making is also much improved throughout the team. They have got a nice balance between kicking and using their talented backline, which has led to successive wins over South Africa (twice) and Argentina. Although it wasn’t perfect – they would have been frustrated to have missed the try bonus-point against Los Pumas – it was another step forward.

The @wallabies proved too strong for @lospumas in the Rugby Championship, making it three straight wins for the first time in four years.#RugbyChampionship #TRC2021 #AUSvARG pic.twitter.com/aMeaSSkltz

Sara Cox makes history: Cox became the first female official to take charge of a Premiership match when Harlequins took on Worcester Warriors on Saturday. In a landmark day for the sport and particularly rugby in England, she has risen through the ranks, quickly becoming one of the top referees in the women’s game before earning an RFU central contract in 2016. Since then, Cox has progressed significantly, officiating in European Challenge Cup encounters and then becoming the first woman to run touch in England’s top-tier in 2020. It’s a superb achievement and hopefully she continues to break down further barriers by doing well enough to become an international referee in the men’s arena.

Nick Cummins the hero: The former Wallaby finisher is one of the game’s cult figures, who is renowned for his outlandish sayings and happy-go-lucky attitude. His ferociousness on the rugby field has also resulted in him receiving his nickname ‘The Honey Badger’, but last week we witnessed Cummins’ softer side when he came to the rescue of a sheep that found itself stuck in a barbed-wire fence. The video of this heroic and kind act soon went viral and rightly so. After freeing the sheep, the 33-year-old hoisted it over the fence much to the delight of his fans, who applauded him on his various social media platforms and he even got a “baaaah” of thanks. Well done, Nick!

🦡🐏 The Honey Badger helping out a sheep. Amazing! 👏👏👏 pic.twitter.com/ybUhdBOGc1

Experienced England internationals left out: While it is exciting times to see England’s up-and-coming players being rewarded with call-ups, spare a thought for some of the experienced ones like Billy and Mako Vunipola, George Ford, Elliot Daly and Jamie George, who were all left out of that training squad earlier in the week. Billy Vunipola and Ford were rested for the summer Tests against the USA and Canada while Mako Vunipola, Daly and George played for the British and Irish Lions on their tour of South Africa. Head coach Jones said afterwards that the senior players omitted from his squad will have to rediscover their best form if they want to be recalled and also warned them that failure to do that could see them missing out on selection for the 2023 Rugby World Cup. It’ll be interesting to see their response.

Eddie Jones fires shots across the bows with his first #England squad of the season.

Setbacks for England duo: Bath were dealt a double blow when they lost the services of both wing Joe Cokanasiga and scrum-half Ben Spencer, who have been ruled out of action with knee and hamstring injuries respectively. Both are key members of director of rugby Stuart Hooper’s squad and although neither player requires surgery, they will be greatly missed during the early stages of the season. Bath revealed that Cokanasiga and Spencer will work with the club’s performance department who will ensure the pair are given the best rehabilitation possible for the quickest and safest return to action. We hope to see them back on the field as soon as possible as they’re incredible talents.

🗣️ "Our main priority is to give both players our full care and support."

Bristol Bears hammered: A hangover from last season’s disappointing semi-final loss perhaps? After dominating the regular season in 2020/21, they have struggled at the start of this campaign and succumbed to an awful 44-8 defeat to Wasps. It came following a 26-9 loss to a weakened Saracens side and there are evidently several issues which Pat Lam needs to sort out over the coming weeks. They were poor in almost every facet in Coventry on Saturday and leaves them surprisingly propping up the table.

“This is where we learn about who we are, we’ve got to look at ourselves.”

Pat Lam on round 2⃣ 👇 pic.twitter.com/XUtr2U97gL

Bulls and Sharks thumped by Irish giants: We were hopeful of a positive display from the South African sides but, apart from the unfancied Lions, they suffered a pretty humiliating weekend. While they will be stronger once their Springboks return, the Stormers, Bulls and Sharks produced disappointing displays. The latter two teams were particularly poor, going down to heavy defeats to Leinster and Munster respectively. It is perhaps a wake up call for the supporters, who thought they would go well in the new competition, and there is plenty of work to be done going forward.

Welcome to Europe, SA! Well if we were expecting stodgy scrum, kick and defend, we are looking in the wrong place. Some magnificent rugby from all 4 sides but especially the two Irish outfits! Saffer central too!

Argentina left out of photo opportunity: It wasn’t a great look for the tournament to see what seemed, from the outside at least, to be the ‘official’ Rugby Championship photo shoot without one of its participants. You can certainly understand the frustration of Mario Ledesma and the Pumas squad, who have done more than most to make sure this competition has gone ahead over the past two years. Although attempts were made to get Argentina involved, a change in travel plans meant they were unable attend but, as Ledesma quite rightly pointed out, previous events were cancelled when other countries couldn’t take part. SANZAAR have at least apologised, attempting to explain the error, but the Argentinians were quite rightly angry about the situation.

It is unfortunate that the captain’s photo excluded the Pumas captain.

Argentina were told that it would be a photo for the 100th test between New Zealand and South Africa.

It could have been handled differently. https://t.co/GBq8Q0TiUH