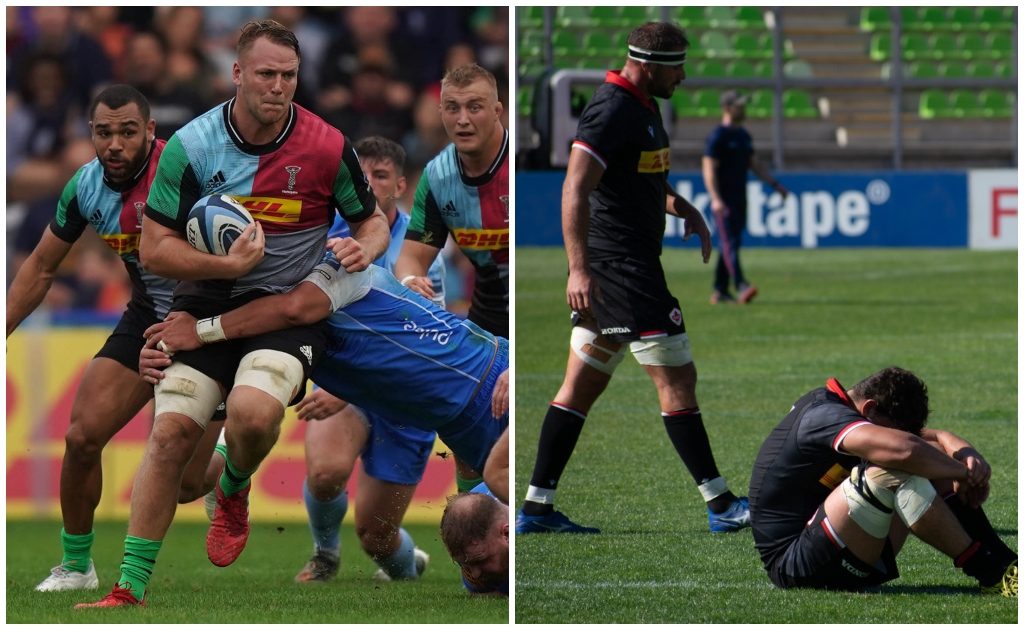 Harlequins’ England prospects: The Londoners as a whole are playing some wonderful rugby, picking up where they left off last season, but there is particular excitement over Alex Dombrandt and Marcus Smith, who once again shone in their dominant win over Bristol Bears. Smith has missed their opening two matches due to Lions-enforced rest but looked like he had never been away, dictating the play superbly to help Quins come from 21-0 down. Dombrandt, meanwhile, has maintained his impressive form, deservedly earning the man of the match award on Friday. Both could well start for England in the year-end Tests and playing like this, the immediate future looks bright for England.

🔥 It's fair to say that Marcus Smith is good at rugby. #HARvBRIpic.twitter.com/5ue7JIujwq

Will Skelton and Wallabies recalls: Those two England prospects could quite easily go up against Skelton who, alongside Tolu Latu and Rory Arnold, were recalled to Australia’s squad. Dave Rennie was given an exemption to select them, with the trio not qualifying via ‘Giteau’s Law,’ and all three will no doubt add plenty to the side. Observers are especially interested in how Skelton fares, though, with the second-row producing a series of fine showings over the past few years, firstly for Saracens and then at La Rochelle. The gargantuan lock has always had the physical attributes but he is now fitter and, as a result, far more dynamic, and will give the Wallabies a much-needed gain line presence.

World Rugby kit decision: We applaud the governing body’s decision to ban kits that make it impossible for colour-blind fans to follow the game. It is an issue which has simply not been dealt with and fortunately they are now taking action. No doubt the presence of chairman Sir Bill Beaumont, who himself is colour-blind, has played a key part in their decision, although it is slightly disappointing that it may be six years before it is fully implemented. When it is, one of Ireland or Wales will have to play in a change kit when they go head-to-head in a Test match. It is a much-needed move and one which will help players, officials and supporters alike as no one should struggle to watch a game.

So this is interesting – from the 2027 RWC, World Rugby has announced that teams will not be allowed to wear red and green against each other, in a move designed to help the estimated 8% of fans who are colourblind.

Is this going to be a thing of the past? pic.twitter.com/UdBccRDQdL

Uruguay: It was a memorable day for Los Teros on Saturday as they booked their spot at the 2023 Rugby World Cup in France courtesy of a 34-15 triumph over the USA in Montevideo. As the scoreline suggests, the South Americans were deserved winners and they outscored the Eagles four tries to two with experienced full-back Rodrigo Silva leading the way with a brace of five-pointers. Los Teros had to do it the hard way after suffering a 19-16 defeat in the first leg of their qualifier in Colorado and they will now compete in their fifth Rugby World Cup, after previous appearances in 1999, 2003, 2015 and 2019. After impressing in the latter tournament, it will be fantastic to see them back in 2023.

🇺🇾 Uruguay have qualified for the 2023 Rugby World Cup in France after beating the USA 34-15 in Montevideo.

🍾 That result seals a 50-34 aggregate win for Los Teros after they lost the first leg 19-16 in Colorado last week. Congratulations!pic.twitter.com/rRNXdevyJ0

Munster: Despite putting out an understrength side against Scarlets, Munster produced an outstanding performance in Wales on Sunday as they ran out impressive 43-13 winners. It continues their strong start to the United Rugby Championship season as their depth in talent once again came to the fore as they blew away many household names facing them at Parc y Scarlets. Jack O’Donoghue’s break and kick through for one of Liam Coombes’ two tries on the day was a highlight for the Irish province, who sit top of the standings above Ulster and Leinster.

Shambolic Bristol: Despite getting off the mark against local rivals Bath last weekend, we were never quite convinced that the momentum had swung for Bristol and so it proved on Friday. The Bears did well to go 21-0 ahead – and into the break with a 17-point buffer – but they utterly capitulated once Harlequins found their rhythm. Once again, their defence was abysmal, but it is not their main issue, which is an inability to choose the right option with the ball. Pat Lam’s men are an attacking side that like to chance their arm but last season, when the West Countrymen deservedly finished top, they found a nice balance of when, and when not, to kick. At the moment, their decision-making is poor and they are making too many mistakes as a result, particularly in their own half. They sit in twelfth position, one spot above Bath.

Bristol just too slow and not accurate enough to secure those rucks. Then, when the turnover happens, everyone stands and watches the try unfold. There's going to be some harsh words this week surely.

Jake White’s comments on Connacht: It might have been over a week ago now but it is still worth touching on, particularly with the Bulls currently struggling despite their maiden United Rugby Championship victory on Saturday. Former South Africa head coach White said Connacht’s players only signed for the Irish outfit so they could secure a contract elsewhere. Irrespective of the inaccuracy of what he uttered, it is hugely disrespectful towards a fine team and province, who have an excellent set-up and are now regularly competing with the best in the league, while playing an entertaining brand. It is an incredibly arrogant attitude too, especially with the ‘mighty’ Bulls losing two of their opening three matches. If the Pretoria outfit really want to succeed this season then a more self-effacing approach wouldn’t go amiss.

Jake White's comments were insulting towards a club and the entirety of its playing, coaching, and background staff.

To call it a "small province" where players only look to "get noticed" to move paints it as a stopgap and not the fantastic, competitive, well-run club it is.

London Irish: Alongside Bath, the only team not to win in the Premiership after succumbing to another defeat. Losing to Leicester isn’t a disgrace, considering the Tigers’ fine start to the campaign, but it continues the frustrations for the brains trust Declan Kidney and Les Kiss. They are not far away but they are not winning the tight, while their good moments have been interspersed with some pretty abject efforts. They have another home game when they face Gloucester next up, one Irish will fancy themselves in, but it is already a must-win for Irish..

@londonirish when oh when are you going to gift us long suffering fans a win and not give away a lead by giving away penalties or handling errors time and time again It is getting very boring now to lose week in and week out. You get our hopes up to then dash them.

Canada: While there was reason to celebrate for Uruguay, it was a totally different matter for Canada after they suffered a shock 33-24 loss to Chile in Valparaiso on Saturday. That result means Canada have failed to qualify for Rugby World Cup 2023 in France and it will be the first time they won’t be in action at the global showpiece. The Canucks had won the first leg 22-21 in Langford but things went pear-shaped in Valparaiso and Chile will now take on the USA over two legs to determine who will go to the World Cup as the Americas’ second qualifier.

Chile🇨🇱 have done it! They have beaten Canada in the second leg of their qualifier!🏉@France2023 | #RWC2023 pic.twitter.com/FrRXeoJBr0