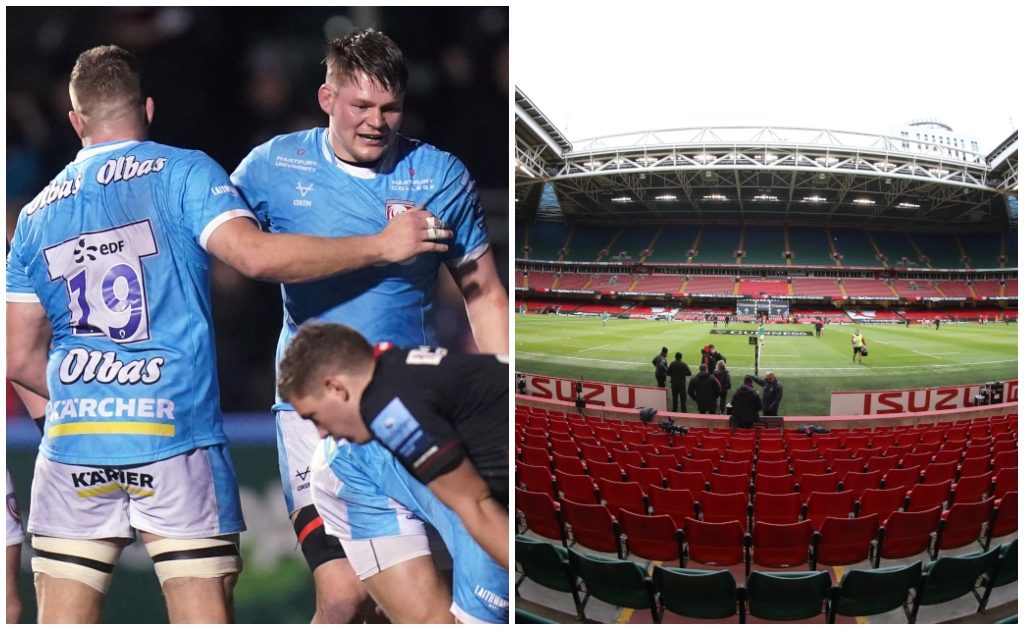 Wasps: Considering their injuries, Lee Blackett’s men produced an outstanding effort to end Leicester Tigers’ incredible winning run. It wasn’t the greatest game but the understrength Midlanders stood up well to the Tigers’ physicality and defended superbly. They also increased the intensity on attack in the second period, with Alfie Barbeary and Tom Willis carrying superbly, and they were rewarded with a victory which Blackett hopes will ignite their season.

Andre Esterhuizen’s third gong in a row: The ex-Sharks centre is in the form of his life at the moment and produced another fine display in Harlequins’ narrow 14-12 victory over Exeter Chiefs. Credit to Exeter for their battling display after seeing Alec Hepburn sent off, but a piece of Marcus Smith magic, with Esterhuizen the recipient of his cross-field kick, levelled matters. It left Smith with a difficult conversion but the England fly-half nailed it to snatch the win. Once again, the headlines were all about the Red Rose playmaker but the South African centre is a key component of the side and earned the man of the match award for the third game in a row. Surely a Springbok call beckons.

Munster fight after early setback: They have been criticised over recent weeks and there is uncertainty over the coaching position, but you can’t help but admire the resilience of the players. They received a significant setback in the 14th minute of their match against Ulster when Simon Zebo was sent off, but the hosts displayed tremendous bravery to claim an 18-13 triumph. The visitors actually went into the break 10-6 ahead and, at that point, many thought Dan McFarland’s men would be the stronger team in the second period, but Munster were excellent and came away with an important victory. Questions still remain but it was a performance which answered the critics.

A huge thanks to the 5,000 Munster supporters who roared us on to a vital victory tonight, your support is much appreciated as always ❤️#URC #MUNvULS #SUAF 🔴 pic.twitter.com/6GxkFuQ82T

West Country pair’s droughts over: Not many saw this coming, including us! While the Cherry and Whites have improved significantly this season, they’re still very much in the development phase, but they certainly showed on Saturday how much they’ve progressed. It was an exceptional display as they overcame Saracens 25-24, responding well to their frustrating defeat to Harlequins last week. George Skivington and his coaching staff, after much criticism last season, are starting to get it right and they are being rewarded, with this their first victory at Sarries since 2008. And on Sunday, it was the turn of Bath to end their own drought as they won their first game of the season against Worcester.

Six on the Rugby Union Writer’s shortlist: The shortlist for the Rugby Union Writers’ Club personality of the year for 2021 has been released featuring four from men’s rugby and two from the women’s game. Antoine Dupont, Alun Wyn Jones, Marcus Smith and Dan Leo all made the list from the men’s side while Simon Middleton and Zoe Aldcroft represent the women’s competition. All of the nominees have had fantastic years, from Smith’s trophy-winning season with Harlequins that resulted in an emergency Lions call-up and an England place, to Middleton guiding the Red Roses’ 18-game unbeaten stretch. Dupont has once again found his way onto a shortlist, having already won World Rugby Player of the Year for his efforts at scrum-half for France and Toulouse, and is probably favourite. However, all are worthy.

Who is your 2021 champion? The winner will be revealed soon…@RUWCOfficial pic.twitter.com/tEXbLKqyjS

Newcastle Falcons’ slide continues: They appear to be following a similar pattern to last season, where the Falcons started well before they faded as the season went on. In their defence, Dean Richards’ team are fiscally underpowered in comparison to the majority of their Premiership rivals, but that doesn’t really explain their recent performances. Newcastle don’t look anywhere near the team that defeated Exeter Chiefs at Sandy Park in November. Their last three league fixtures have seen them succumb 44-8 to Northampton Saints, 31-0 to Leicester Tigers and 43-21 to London Irish. They haven’t been competitive in any of those matches and that will be of concern to Richards.

REACTION: Newcastle Falcons director of rugby Dean Richards made no attempt to sugar-coat today’s 44-8 loss at home to Northampton Saints, and spoke of the huge uncertainty facing the club regarding their upcoming games in France.https://t.co/O7dlnhAB3b pic.twitter.com/FKTd4gZy2D

Michael Bradley carries the can: Bradley’s week falls unquestionably into the “Not” section after he was relieved of his duties as head coach of Zebre Parma. This comes after a dire start to the season where his side lost the first six league games. However, there’s no animosity from club ownership who said: “The whole franchise wishes to express its utmost gratitude to Michael for the commitment and contribution made over the years and for the wonderful human and professional journey undertaken together.” Bradley was head coach from 2017-2022 and despite recent failures, Zebre experienced their most successful season of all time under the Irishman in his first campaign as head coach.

Michael Bradley has been sacked as Zebre head coach.

The club expresses its "utmost gratitude" to the former Connacht and Edinburgh boss. https://t.co/xX753Z0Zls

Silent Six Nations on the cards for the Welsh: Due to Covid restrictions in Wales, the national team, along with the regions, who are already doing so, are set to play their Six Nations campaign behind closed doors. The Tottenham Hotspur Stadium in London has emerged as an option should the team relocate for the purposes of the tournament, while Exeter boss Rob Baxter believes the whole of the Six Nations should be moved to England to help work around the pandemic. In September 2020, Welsh Rugby Union bosses were shown around Tottenham’s stadium to possibly hold their 2020 Autumn Nations Cup home games there. The move, this time, is very much on the cards as the Welsh government have offered the WRU no help so far, but Eluned Morgan, the Welsh Minister for Health and Social Services, said they’d be “disappointed” if the WRU moved, despite the fact they lost out on £14m the last time they played rugby behind closed doors. If they were to stay and play in an empty ground, that setback would not just hurt Wales’ hopes but be further compounded for the neutral fan as the Principality Stadium is widely regarded as boasting the best atmosphere in the international game. But, of course, safety first.

🗣️ "Of course, we would all far prefer to be in a position where the Six Nations could go ahead with people watching the game here in Wales."

Welsh plagued by injuries: This week it’s a double feature for the Welsh national team as their starting XV is looking increasingly uncertain. It has been announced by the Ospreys that tackling machine Justin Tipuric and world renowned centre George North will likely miss the Six Nations start with respective injuries. With Tipuric’s fellow back-rower Josh Navidi out and Taulupe Faletau looking doubtful, Wales can’t seem to catch a break. The missing players list doesn’t end there: Alun Wyn Jones and Ken Owens will also be absent, adding to Wayne Pivac’s headache. It really has not been a pleasant period for the Welsh and defending their title is now looking extremely difficult.

❌ Neither player has played this season due to respective injuries.

Covid-19 postponements: It’s been nearly two years since the pandemic wreaked havoc throughout the world and it’s had a devastating impact on fixtures, especially in the northern hemisphere where several of the top leagues’ matches were either cancelled or rescheduled. Over this past weekend, the Top 14’s matches were badly affected with the highly anticipated encounters between Montpellier and Toulouse, and La Rochelle and Toulon both postponed. Meanwhile, in the United Rugby Championship, the derby between the Scarlets and Dragons at Parc y Scarlets was also pushed back while the Japan Rugby League One competition suffered its first setback when a Covid outbreak at the Panasonic Wild Knights forced the postponement of their clash with Kubota Spears Funabashi Tokyo Bay.

The R10 fixture between @Scarlets_Rugby and @DragonsRugby will not take place due to a number of positive Covid-19 cases.#URC