Home Who's hot and who's not Who’s hot and who’s not: Connacht, Hogg, England, Munster, Leicester 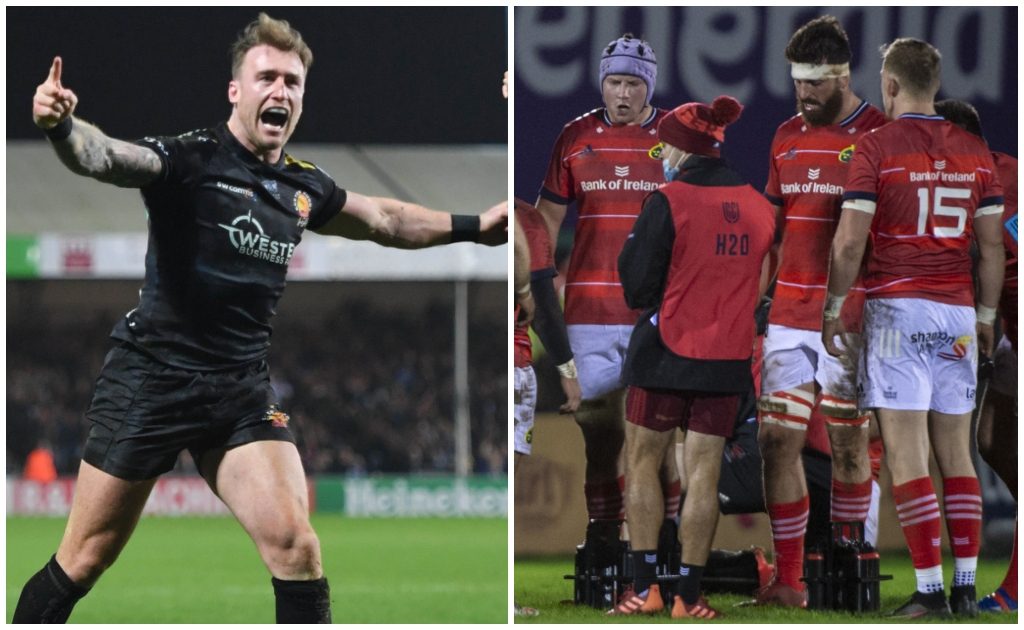 Connacht: The Galway-based outfit have earned plenty of praise for their ball-in-hand approach to the game and that style of play has been reasonably successful during their United Rugby Championship (URC) and Champions Cup campaigns. However, Connacht had to graft for their 10-8 win against Munster at The Sportsground on Saturday, but they were up to the challenge to the delight of their coach, Andy Friend. They spent long periods of the first half on the back foot but a solid defensive effort kept Munster at bay.

Connacht are victorious against Munster Rugby at home! What a game!#ConVMun pic.twitter.com/dIZSA4i1kr

Stuart Hogg: These are good times for the Exeter Chiefs full-back. After issuing a statement recently, in which he clarified that he was happy at the Sandy Park-based outfit and denied rumours that he was planning to exit the Premiership club at the end of the season, Hogg stepped up with an excellent attacking performance in Exeter’s victory over Bristol Bears on Saturday. The Scotland international finished with 71 metres gained from 18 runs which included two clean breaks, two defenders beaten, six offloads and a crucial try which sealed his side’s victory.

Triple fitness boost for England: Eddie Jones will be a happy man ahead of this year’s Six Nations tournament after he received a shot in the arm with the news that Owen Farrell, Jamie George and Manu Tuilagi could all be available for selection when they kick off their campaign against Scotland at Murrayfield on February 5. Farrell and George have been sidelined since sustaining injuries in England’s Autumn Nations Series Test win over Australia but George returned to action for Saracens against Northampton at the weekend and Sarries director of rugby Mark McCall said he expects Farrell to be playing again by the end of January. Meanwhile, Sale Sharks boss Alex Sanderson revealed that Tuilagi is is set to play a part for the club over the next month after he was injured in England’s victory against South Africa last November.

🗣️ "He’s definitely ahead of schedule, but we still need to get the sign-off.”

Ox Nche: It’s been a fantastic 12 months for the Sharks and South Africa front-rower and after catching the eye with some impressive performances for his country on the playing field, his year got even better off it when he graduated with a BSc in Geography and Statistics from the the University of the Free State. Nche celebrated the achievement with a photoshoot last week and we tip our hat to the 26-year-old, who has cemented himself as the Springboks’ first choice loosehead prop after the retirement of the legendary Tendai “The Beast” Mtawarira following the Boks’ triumphant 2019 Rugby World Cup campaign.

A very belated graduation shoot organised by my little sister❤. Hope you guys enjoy the pictures😊😁.

And well very thankful for the classmates, lecturers and friends I had through this degree🙌🏾🙏🏾 pic.twitter.com/yQAuB9CLsc

Alex Dombrandt: The Harlequins back-rower showed his class with an outstanding attacking performance for his club during their 41-27 triumph against Northampton Saints in last Monday’s Big Game 13 encounter at Twickenham. The 24-year-old proved a real handful to the Northampton defence and was rewarded with a hat-trick of tries after gaining 42 metres from 12 carries which also included one clean break, a defender beaten and a couple of offloads. He then produced another good display in their victory over Gloucester, showing his defensive qualities to win a couple of turnovers. Dombrandt was a regular in England’s squad during last year’s Autumn Nations Series, although he made all his appearances in that campaign off the bench. Based on current form, he will be pushing for a spot in Eddie Jones’ starting line-up for the Six Nations.

Leicester Tigers in salary cap trouble: You wondered whether the Tigers bubble would ever burst, but it was never thought to be in this fashion as the club confirmed that they are under investigation for possible salary cap breaches. It is nothing to do with the current set-up, who have been guided by CEO Andrea Pinchen and head coach Steve Borthwick since 2020, but relates to historic image rights payments to players. However, if found guilty, you would think there would be severe sanctions given what happened to Saracens in 2019 and 2020.

The salary cap has reared its ugly head once again, but could it be a good thing? 🤔

Munster: Two games or performances don’t define a season but there are a few grumblings emanating from their fan base following their awful display against Connacht. The announcement of Johann van Graan’s departure has probably not helped, while a lack of game time for a number of their players has also caused problems, but they certainly don’t look like United Rugby Championship or Champions Cup challengers at the moment. The very least Munster supporters expect is to be in contention in the latter stages of both competitions and there just seems to be a lack of direction on the field at the moment.

One of those games where the losing bonus point flatters us.

We didn't fire a shot.

Sure, disjointed, guys coming back, no minutes… but not good enough. #CONvMUN

Bristol Bears: They have been better in defeats to Leicester Tigers and Exeter Chiefs, but it is still nowhere near the fluent Bristol we have become accustomed to. Pat Lam’s men did well to stay in contention on New Year’s Day but, to be perfectly honest, they were on the ropes for the majority of the clash. Exeter, who themselves are struggling for rhythm, controlled the encounter and should have earned a bonus-point. The play-offs are not out of the equation for last season’s league leaders but they need to go on a run and that must start against Sale Sharks on Friday. The Sharks, who are also in the lower reaches of the Premiership after finishing the previous campaign in the top-four, are not playing especially well, but they have got a strong squad with an incredibly powerful back five of the scrum. Should Bristol lose that then it may be curtains for their domestic campaign.

More bad news for Bath: Although not yet confirmed, Anthony Watson appears to be on his way out in the latest blow for the club. With the West Countrymen currently residing at the bottom of the table following 10 successive defeats, they are likely to see another big player depart after Taulupe Faletau joined Cardiff. Watson has been outstanding for Bath in his eight years at the Rec-based outfit but evidently feels it is the right time to leave given their sharp decline over the past couple of seasons. Something is clearly wrong at the club and this is another indicator of that.

😭😭 Unfortunately, I’m not surprised. Anthony Watson is a classy player and losing him would be a massive loss. https://t.co/hAneDILPtS

Blake Ferguson: It’s not the way to announce yourself at your new or in your new sport. The former NRL star signed for Japanese team NEC Green Rockets Tokatsu ahead of the 2022 season but was arrested just over a week before their first game of the campaign. On December 30 in Tokyo, Ferguson allegedly got into an altercation with another man at a restaurant and was subsequently arrested. The 31-year-old was then taken to Azabu station where he was searched and reported to be possession of cocaine. The ex-Parramatta player enjoyed a very successful career on the field in rugby league but it was littered with off-field controversies and his stint in union could well be over before it really started after the Green Rockets terminated his contract.

#BREAKING – reports via Japanese media tonight that former NRL star Blake Ferguson has been arrested on allegations of cocaine possession. This news comes only days before his Japanese Rugby Union debut. Worst possible start to the new chapter of Fergo's career.