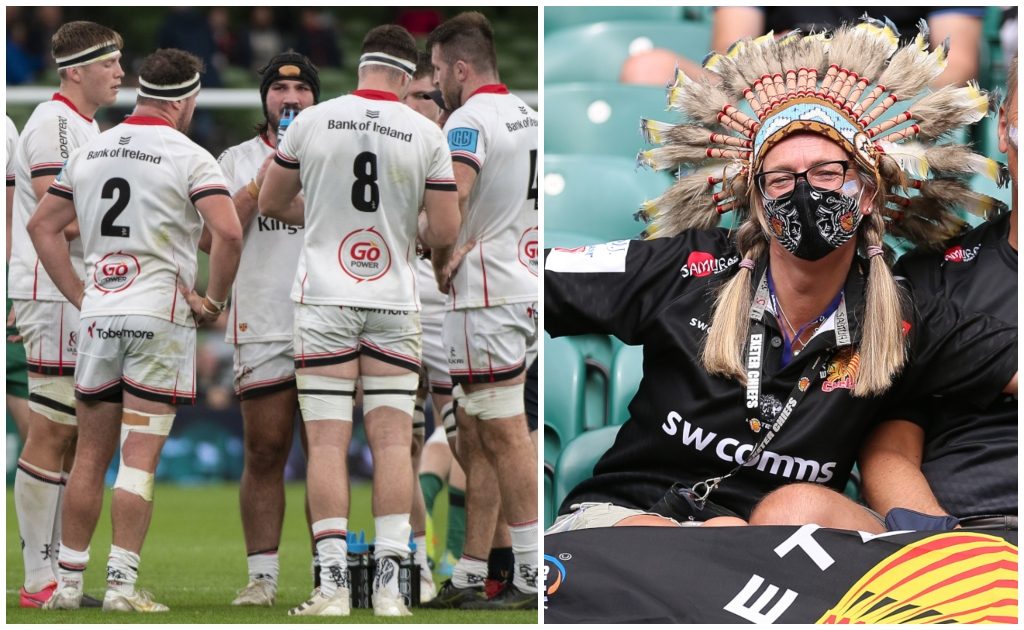 Ulster: Wins for visiting teams at the RDS Arena are rare indeed but that is what Dan McFarland’s men managed to achieve on Saturday. They were excellent in their 20-10 victory over Leinster, controlling the breakdown battle and taking the opportunities when they presented themselves. After a disappointing effort against Connacht in their previous United Rugby Championship clash a month ago, this was the perfect response. They fronted up physically and deservedly went away from Dublin with the spoils. Ulster are now level on points with Leo Cullen’s outfit at the top of the table and will take huge confidence from this performance.

Sir Kev: What an incredible achievement it was from Leicester Tigers defence coach Kevin Sinfield as he managed to complete his 101 mile run in 24 hours challenge, raising over £1.5m for charity. Money from his latest challenge is being split between the MND Association and the Leeds Hospitals Charity, who are planning a new care centre for motor neurone disease patients to be named after former teammate Rob Burrow, who was diagnosed with the disease in late 2019. To run from Leicester to Headingley understandably left Sinfield “broken” but the moment he embraced his friend Burrow, you could see he knew it was all worth it.

What a moment, what a man! Kevin Sinfield finishes his MAMMOTH 101 mile run in 24 hours live on #BBCBreakfast 🏃‍♂️

And his best mate Rob Burrow saw him over the line pic.twitter.com/IWDgm4wowb

Tadhg Furlong’s new contract: There was a huge boost for Leinster and Ireland fans as the game’s leading tighthead prop committed his future to the Irish Rugby Football Union (IRFU) for a further three years. Furlong has consistently been playing at an incredibly high level so tying down the 29-year-old to a new deal was imperative for his province and the IRFU. That was achieved on Thursday, much to the delight of those supporters as there were reportedly plenty of big spending clubs chasing his signature. Leinster and Ireland will now hope they see more of the same, if not better, showings from Furlong in the coming seasons.

That's my boy. Go on Tadhg!pic.twitter.com/wzaqKiVUdF

Changes to eligibility laws: World Rugby’s decision to alter its eligibility laws is a landmark ruling which is sure to change the game’s landscape as it opens the door for several of the world’s leading players to return to Test rugby in the colours of the country of their birth. The ruling will definitely have a positive effect on the Pacific Island nations, who have a plethora of top class players who were ruled ineligible before the change was implemented. Amongst those include the likes of Charles Piutau and Israel Folau, who can now represent Tonga, and Julian Savea, who is eligible to play for Samoa.

Fulgence Ouedraogo record: The veteran back-rower set a new club record for Montpellier when he took to the field for the 332nd time in their Top 14 clash against Castres at GGL Stadium on Saturday. The momentous occasion means the 35-year-old breaks the previous record set by Didier Bès, who played as a hooker for Montpol from 1990 to 2003. Despite his advanced years, Ouedraogo is still a vital cog in the Montpellier machine as he played for a full 80 minutes in his side’s thrilling 25-24 win over Castres. The former France player’s next goal is to break the official Top 14 appearance record of 403 matches which is held by former Castres lock/flanker Rodrigo Capó Ortega.

Stephen Larkham coup for Brumbies: After a three-year spell with United Rugby Championship outfit Munster, where he is currently working as a senior coach, the legendary Wallabies fly-half is set to take over the reins as the Brumbies’ head coach during the 2023 Super Rugby Pacific tournament. Larkham is no stranger to the Brumbies, of course, having had great success with the Canberra-based outfit as a player from 1996 to 2007 and he was also part of the club’s coaching staff from 2011 to 2013 . We wish him well during his second stint in charge of the team.

Covid disruption for URC in South Africa: South African rugby has suffered more than most during the Covid pandemic and they were dealt another blow after their franchises’ first ever home matches in the United Rugby Championship were postponed. There was such excitement as the Stormers, Lions, Sharks and Bulls prepared to host their European opponents but, due to a Covid variant that has been identified in South Africa, the matches were called off. That decision then ended up being completely justified as people at Munster and Cardiff tested positive for the virus. Although it was galling to see the URC disrupted and the South Africans miss their chance to host competition matches in Round 6, health obviously comes first.

I said it on Friday, but it applies just as much now. What a day. Thoughts with the players and staff of Cardiff and Munster still out in South Africa. Just a nightmare scenario. Here's wishing them all the best.

Joe Tekori and Rob Kearney denied proper farewell: Talking of Covid, it also had an impact north of the equator on Saturday as the match between the Barbarians and Samoa was postponed due to an outbreak in the Baa-baas camp. Clashes involving the invitational side at Twickenham have not gone well over recent times, with their encounter against England earlier in the year being called off due to players breaking protocol, but this time it didn’t seem as though they were at fault – albeit the late announcement left a lot to be desired. Nevertheless, it deprived two greats of the game a proper send-off. Samoan lock Tekori, who was meant to be featuring in his final ever match for his country, was hugely emotional, while Kearney was due to play his last game before retiring. It was gutting for both of those rugby legends to see the match cancelled.

2. The whole squad complied to the letter with the Covid protocols throughout the week, including daily lateral flow tests.

Byron McGuigan: You have to question what the Sale Sharks wing was thinking when he threw Saracens centre Nick Tompkins to the ground during their clash on Sunday. Perhaps borne out of frustration with his side 13-0 in arrears, he completely lost control and was deservedly red carded. Tompkins isn’t entirely blameless either as he screamed at McGuigan as he was on the ground, but the Sale player’s reaction was uncalled for. In fact, Sean Maitland did exactly the same thing to Akker van der Merwe just moments earlier but, unlike his Sharks team-mate, Van der Merwe kept control and the Sarries player was duly punished for his taunt. As a result of McGuigan’s stupidity, it released the pressure on Saracens, who had been under significant duress at the start of the second half, and left the visitors down a man for over half-an-hour. Sale battled and the 14 players came away with some credit in the eventual 25-14 defeat but, against a team as good as Sarries, the game was effectively over at that point.

It's gone from bad to worst for Sale! 😬

Eben Etzebeth’s concussion problems: The Springboks and Toulon hardman is set for a lengthy spell on the sidelines after it was revealed over the weekend that he will be absent for three months after sustaining his third concussion of 2021 during South Africa’s Test against England at Twickenham last week. Although Etzebeth is one of the professional game’s toughest players, who puts his body on the line consistently for club and country, player safety is paramount. Toulon, as well as France’s National Rugby League, deserve plenty of praise for taking this step as French rugby have not always been great for protecting their players in the past.

🗣️ "After specialist advice and in accordance with the concussion management protocol, the player must observe a three-month break."

🇿🇦 Eben Etzebeth to be sidelined until February 2022. #Top14 https://t.co/VA4CMwns4V

Exeter delaying branding decision: It’s not really up for debate any more, the Chiefs need to change their branding. That should have been the case as soon as the Native Americans stated that it was offensive to their culture, yet the Chiefs continued to retain the same imagery. Following a meeting last week, there has been a small step forwards and it looks as though they will finally alter the branding, but a firm decision has still not been made. The club have lost a lot of goodwill over this affair and their recent statement only extends the agony for all involved.

“We need more time to try and find someone, anyone who will tell us what we want to hear instead of the inconvenient and unpalatable truth we’ve been ignoring for over a year” https://t.co/828qtgFr5Y

Setbacks for Manu Tuilagi and Alun Wyn Jones: It was gutting to see both Tuilagi and Jones receive bad news over their respective injuries. Tuilagi injured his hamstring in England’s victory over South Africa and will be out for at least six weeks. It could be longer should he require surgery and it is another blow for a player that has struggled to stay fit over the years. Tuilagi could make the Six Nations, however, which is more than can be said for Jones, who unfortunately looks set to miss the annual international tournament after needing a second operation on his shoulder. We wish both players all the best in their recovery.

Every time its reported he's injured there is *always* comments underneath "maybe he should retire". I don't think any of us can appreciate how much mental strength it must take for him to do his rehab, keep fit, & come back fighting each & every time.