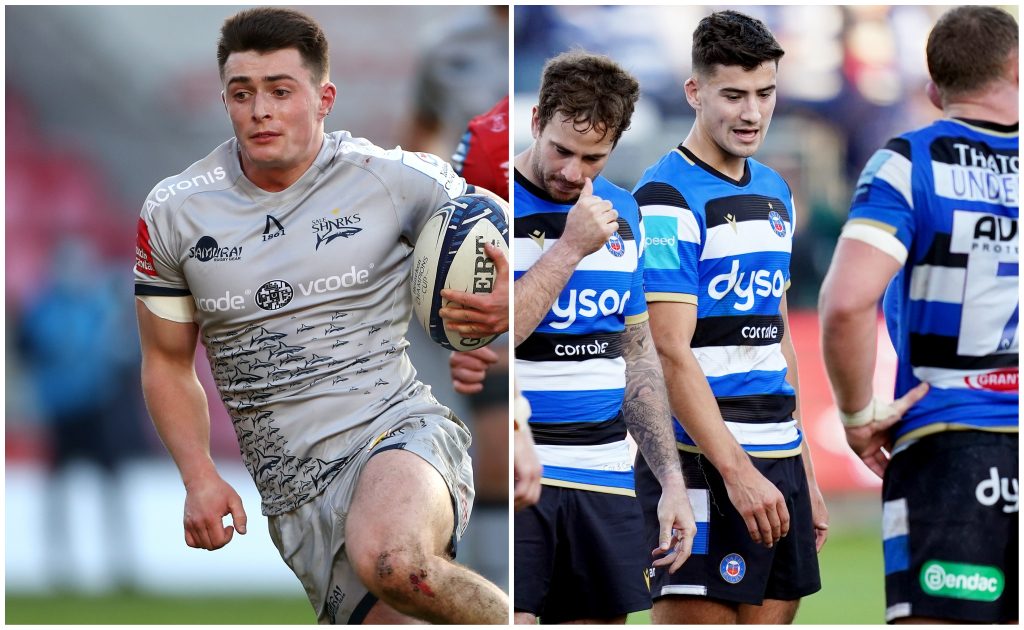 Raffi Quirke: It was a great time to produce your best performance of the season with Eddie Jones watching on. The Sharks have had an inconsistent start to the campaign but, following the return of some key individuals, they sealed an impressive victory over Harlequins on Friday. Although the Du Preez twins, Jean-Luc and Dan, and Tom Curry were superb, the young Quirke was undoubtedly the star. Despite being just 20, he was included in England’s squad for a training camp last month and has now made the cut for the Autumn Nations Series. He’s an exciting talent and, even if he doesn’t make his bow next month, it won’t be long before the scrum-half is a regular for the Red Rose.

"He's a special player, his potential is massive!"

Falling in love with the game ❤️
How to kick a great box-kick 🥾
Learning from Jason Robinson ⭐️@andNickMullins went to find out more about one of the brightest talents in @premrugby, @SaleSharksRugby's Raffi Quirke… pic.twitter.com/hmNCMOsMpE

Sonny Bill Williams and Keith Earls breaking down barriers: It was incredibly brave of both former New Zealand centre Williams and Ireland wing Earls to open up as they have done over the past week about their respective battles. Williams, who was launching a book, spoke about his struggles as a young star playing rugby league, how he managed to turn his life around and that he hopes his words can help any youngsters out there who find themselves in the same boat. Earls meanwhile was speaking on The Late Late Show about his diagnosis of Bipolar 2, with both players needing to be applauded for speaking so honestly. It’s also pleasing to see the pair in a good place at the moment.

"Thankfully the last couple of years I've got a great hold on it"@KeithEarls87 shares his story of being diagnosed with Bipolar 2, the negative voice in his head he calls 'Hank', and how he reached out and asked for help.#LateLate pic.twitter.com/2E4VcAW9Lr

Scotland and Wales newbies: It was a memorable week for some young up-and-coming players in Wales head coach Wayne Pivac and Scottish counterpart Gregor Townsend’s respective squads after they earned call-ups ahead of the upcoming end-of-year internationals. For Wales, Scarlets prop WillGriff John and Christ Tshiunza of Exeter Chiefs are the uncapped players in Pivac’s 38-man squad with back-row Tshiunza’s selection earning plenty of reaction as he’s only 19 years old. Meanwhile, Townsend’s 36-man squad has 14 newbies in its ranks and one of those selections has raised eyebrows in some quarters in Scotland but more on that topic later. Congratulations to all selected.

A great win today against Cardiff topped off by the incredible news that Christ Tshiunza has been named in the @WelshRugbyUnion squad for the upcoming Autumn Internationals.

Leicester Tigers: Make that five in a row. What a start to the Premiership season it has been for Leicester under Steve Borthwick as they racked up a fifth successive victory on Saturday as they steamrolled Worcester Warriors on the road. Tigers scored seven tries in all as they moved seven points clear of second-placed Harlequins and it is clear to see that they have turned a corner after their struggles over recent seasons. Recruitment has finally been nailed by the club and with George Ford steering the ship at fly-half, they look like title challengers.

Coleys happy, that’s all that matters. Thank you for the travelling faithful and all the support from home, you guys have been incredible. pic.twitter.com/kEtqLy6T8p

Saracens and Max Malins: It looked very much like a case of men against boys as Sarries delivered a clinical performance en route to a 71-17 triumph over Bath in their Premiership encounter at the Rec on Sunday. Sarries were in a rampant mood from the outset, outscoring their hapless hosts 10 tries to three and they were up 45-0 at the interval. Leading the charge was utility back Malins, who came to the fore with an outstanding attacking performance. Playing on the left wing, the 24-year-old England player gained 66 metres with ball in hand, which included three clean breaks, two defenders beaten, an offload and a hat-trick of tries as well as the official man-of-the-match award.

🔥 Max Malins is on fire for Saracens against Bath. #BATvSAR

Ulster, Leinster and Munster remain untouched: After four rounds of the inaugural United Rugby Championship season, these three provinces from the Emerald Isle are the only sides who are still unbeaten in the tournament. Ulster are sitting pretty at the top of the table as they have picked up bonus points in each of their four matches played so far while Leinster and Munster are just a point adrift in joint second place on the table. Round Four’s action saw Ulster continuing with their great form courtesy of 26-10 triumph over the Lions while Leinster made a statement of intent as they sealed an emphatic 50-15 home victory over the Scarlets and although Munster had to dig deep in their derby with Connacht, they eventually got the job done and clinched a hard-fought 20-18 victory. Surely these three will be the teams to beat.

Here’s the table after Round 4 📊

Which team surprised you most? 🤔#URC pic.twitter.com/mk94w037TE

Debate over Dylan Richardson call-up: While the eligibility rules can be farce, most would agree that if you have a parent(s) from the country you are representing, that is perfectly acceptable, which is how Richardson qualified for Scotland. Put it this way, the Sharks hooker or back-row forward is ‘more Scottish’ than Hamish Watson, who was born and raised in England, came through the system at Leicester Tigers but qualified through his grandfather, and yet no one seems to question his ‘Scottishness’. We can understand those followers who have frustrations with the residency ruling, but they should have no qualms with the Richardson case and we wish him well in the squad.

Will Addison and RG Snyman injuries: It was galling to see that Munster second-row Snyman had re-injured his knee, which will keep him out of action for potentially the next year, and that news was compounded by Addison’s injury while playing for Ulster on Friday. Like the South African, the Ireland international back had only recently returned from a lengthy absence but now looks set for another spell on the sidelines. It is awful for both players and we wish them all the best in their recovery and better luck in the future… they really deserve it.

This update on RG Snyman’s Instagram says a lot about the mindset of the guy.

The retirement of Liam Squire: Talking of injuries, the former All Black back-row has unfortunately succumbed to his and announced his retirement from the game at the age of just 30. Squire was a terrific player and at one stage looked like the heir apparent to the great Jerome Kaino, but his body disappointingly had other ideas. He missed the majority of the 2019 campaign and pulled out of New Zealand’s squad for the Rugby World Cup, citing that he was not “physically or mentally ready” for international rugby. Squire could never string a consistent run of games together after that, which is huge shame for a such a big talent, and we wish him well in his retirement from rugby.

🎉 Happy birthday to All Black number 1151 Liam Squire! How do you rate this pace by the big man against Australia? pic.twitter.com/zacVLhF2Q0

Scarlets: As the tweet below reads, this is the fourth time the Welsh region has leaked 50 points or more this year, which is concerning to say the least. Their latest defeat, a 50-15 negative at Leinster, comes on the back of losing 43-13 at home to Munster, so it has been a pretty sombre week for Dwayne Peel’s men against the Irish giants. Yes, those two sides are arguably the best in the competition, but Munster did not have their strongest team out for their win, which means there’s plenty of rebuilding needed before they take on Benetton in Llanelli on Friday. That game is the perfect chance for Scarlets to get back on the horse but if they don’t sort out their defence they might be in trouble.

4th time Scarlets have conceded 50 points or more in 2021

Bath: Although Saracens were deserved winners at the Rec, more was expected from the hosts, who were on the back foot for long periods and offered little resistance to the North London giants’ onslaught. As the scoreline suggests, Bath were outplayed in all facets and two of their three tries were consolation scores racked up in the game’s dying moments, when Sarries took their foot off the pedal. The result means Stuart Hooper’s troops are firmly rooted to the bottom of the table with four defeats from as many matches played. That represents the West Country outfit’s worst start to a league campaign for 20 years and the situation could get worse as they face Quins at the Stoop on Saturday.