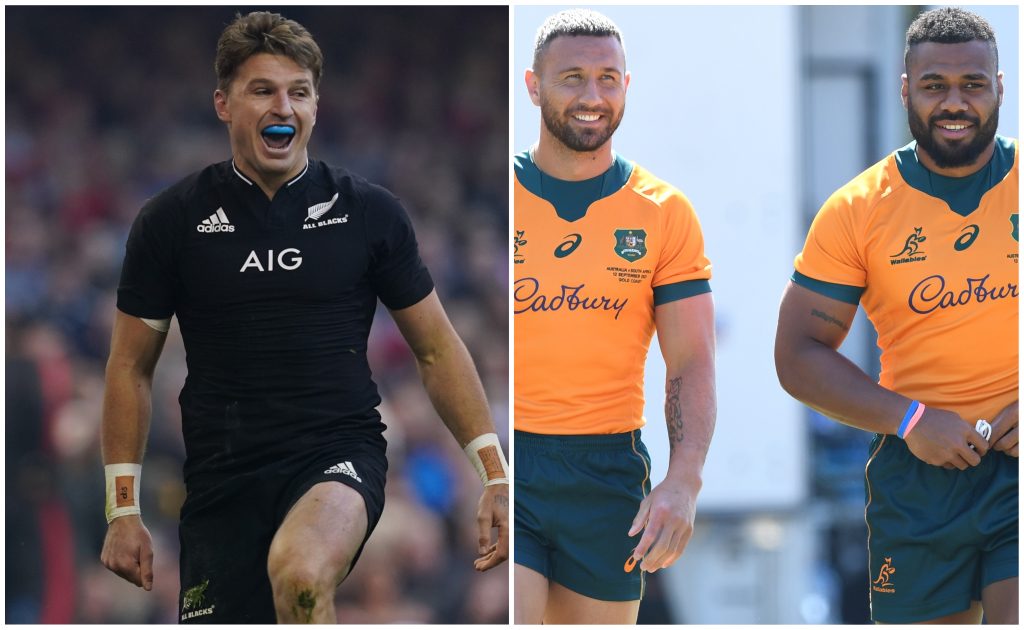 Alun Wyn Jones and Beauden Barrett: Both achieved incredible milestones during Wales’ clash against New Zealand in Cardiff, with Jones overtaking Richie McCaw’s cap record for an individual nation and Barrett reaching 100 appearances for the All Blacks. Needless to say, they have been incredible servants to their respective countries, producing a number of memorable moments and representing their teams with distinction, with Barrett adding to those with a two-try performance on Saturday. For Jones it was less positive as he left the action early on with what looked like a shoulder problem. We all hope he recovers to feature again in November and adds to his cap tally.

Congratulations to @WelshRugbyUnion men's captain Alun Wyn Jones on surpassing Richie McCaw's national team record by winning his 149th for Wales. He already became the most-capped player in test rugby last October and has 161 when including his @lionsofficial tests. Incredible.

Kyle Steyn’s four-try haul for Scotland: The Glasgow Warriors flyer was the toast of Scotland when he crossed for four well-taken tries in his side’s 60-14 triumph against Tonga at Murrayfield on Saturday. The 27-year-old, who last featured for his country during the 2020 Six Nations, was only playing in his second Test but made sure he left his stamp on the match with his try-scoring heroics – a feat which no other Scotland player has achieved in the international arena for 26 years. In his first Test start, Steyn emulated Gavin Hastings, who crossed for four five-pointers against the Ivory Coast at the 1995 Rugby World Cup in South Africa. A mention too goes to wing partner Rufus McLean.

New Zealand’s box office moments: The All Blacks delivered another outstanding attacking performance against Wales in Cardiff and eventually sealed an emphatic 54-16 triumph in front of an appreciative crowd at the Principality Stadium. Leading the way was fly-half Barrett, who started and finished the rout in his 100th Test by crossing for tries in the fourth and 79th minute respectively. The All Blacks scored five further tries with the Test’s standout moments being a brilliant piece of individualism from wing Will Jordan for his five-pointer and the superb interplay between Sevu Reece, Ardie Savea and Rieko Ioane before replacement Reece crossed for a brilliant score late on.

Hall of fame inductees: Six more rugby greats became the latest to be inducted into the World Rugby Hall of Fame. Will Carling and Jim Telfer are added after wonderful careers with England and Scotland respectively, with the latter also a legend with the British & Irish Lions, especially following the 1997 tour to South Africa. Osea Kolinisau has also been selected after leading Fiji to Olympic gold, with Humphrey Kayange, Huriana Manuel-Carpenter, Cheryl McAfee making it after playing key roles for Kenya, New Zealand and Australia respectively.

Shocked ! Humbled ! Slightly awkward 😄 – not something I ever envisioned ! For all sorts of reasons 😂 – but hugely honoured https://t.co/yUKHgJoeKt

The news over the World 12s tournament: We were never fans of the initial concept so it was pleasing to see World Rugby put pay to the competition during the week following opposition from key stakeholders. It was described as being akin to cricket’s Indian Premier League, which would see a shortened, 12-a-side version of the game take place. There would also be an auction as the best tier one and two players were bid for by eight franchises in an attempt to bring more money into the sport.

However, when there are 7s and 15s, which both have numerous competitions around the world, there is the issue of fitting it into the calendar and also player welfare. Equally, the problem for rugby is not necessarily about finding new tournaments or gimmicks, but developing the quality of the current game. While garnering extra money is a way of going about it, who would benefit from this extra cash? We certainly can’t imagine it would be the tier two nations, who are the ones that really need it.

Out of international window Tests: It’s a massive shame that these matches take place when they do as it’s seldom that the competing countries are of equal strength in these internationals – a case in point being New Zealand and their recent Tests against the USA and Wales. The Wales v All Blacks Test was a clash between the Six Nations and Rugby Championship champions but it did not live up to that billing as the hosts fielded a severely understrength side and they had little chance of claiming a win. What a shame it eventually became a blow-out.

Wales v NZ in Cardiff used to be one of the game’s most iconic fixtures. But with the match scheduled outside World Rugby’s formal Test ‘window’ and the hosts missing around 20 players, these days it is more about the dosh than the bosh.

Another Billy Vunipola injury: Hopefully the prognosis is good for the England number eight and he isn’t out for another extended period after being forced off against Harlequins with a knee injury. Saracens director of rugby Mark McCall has confirmed that he has damaged his medial collateral ligament but, in the words of the boss, “MCLs can range from not too bad to serious.” Let’s hope it is the former as Vunipola has enjoyed a fine start to the campaign, despite being dropped by Eddie Jones for the Autumn Nations Series.

🗣️ “We don’t know how serious it is, MCLs can range from not too bad to serious.” #GallagherPrem

Sale Sharks: After losing to table-topping Leicester, Sale were expected to return to winning ways against Worcester, who were on a five-match losing streak. Things did not go according to plan though as the Sharks were never at the races against the Sixways-based outfit and after trailing 17-7 at half-time, they suffered a 27-14 defeat. The result leaves Sale in 10th position on the table with 13 points, just one spot above Worcester, who are a point adrift. It is a very poor start to the season for a side that were expected to challenge for the title. Quite frankly, their skill levels are abysmal and, of all the teams in the Premiership, they look the least comfortable with ball in hand. They made far too many errors in the Warriors’ 22 on Saturday, leaving Alex Sanderson with much to ponder ahead of their clash with Northampton.

A less than ideal day in Worcester.

Credit to the Warriors who were relentless throughout today's match.#WORvSAL pic.twitter.com/9TX26dKktg

Wallabies selection confusion: Will they tour? Won’t they tour? Whose fault is it? It’s been a bit of a mess in Australian rugby this past week as it was revealed that Japan-based trio Quade Cooper, Samu Kerevi and Sean McMahon would not be involved on their European tour. Kerevi and McMahon opted out at the start of last week, but there was still a chance Cooper could make it. However, the Wallabies claimed that the 33-year-old’s club, Kintetsu Liners, expressed reservations about the fly-half joining the squad for this month’s games.

Cooper and Kerevi then released heartfelt statements but the latter only added to the confusion. He praised both his club and the Australian camp, but also added: “I’ve felt angry, sad, confused, betrayed but mostly heart broken. I’m trying my best to let God take control instead of letting my emotions take over… But be careful, God has a way of bringing out the TRUTH one way or the other.” Was he criticising Rugby Australia? They’re surely the only party left that he didn’t mention. Either way, it’s been a disappointing episode and leaves Dave Rennie without their outstanding 10-12 combination for the Autumn Nations Series.

The death of Sandy Carmichael: It was very sad to hear about the death of Carmichael, who was a giant of the game in the 1960s and 1970s. A tighthead prop with the West of Scotland, he was a dominant presence in the set-piece and would go on to earn 50 caps for the national team, a record for a Scottish forward at the time. He was also selected to go on two British and Irish Lions tours in 1971 and 1974, but would not make a Test appearance. Carmichael was particularly unfortunate in ’71 when he was the main victim of the ‘Battle of Canterbury.’ During a particularly violent encounter, the prop suffered five fractures of the cheekbone. He would remarkably finish the match, which rather summed up his character, but he was subsequently ruled out of the tour. A great player and a wonderful man, our thoughts are with his family and friends.

He was a giant of the game in Scotland in many ways and our thoughts and condolences go to his friends and family at this time 💙 pic.twitter.com/rdJxwYV88W