Home Who's hot and who's not Who’s hot and who’s not: Marcus Smith, Munster, Wasps and Antoine Dupont 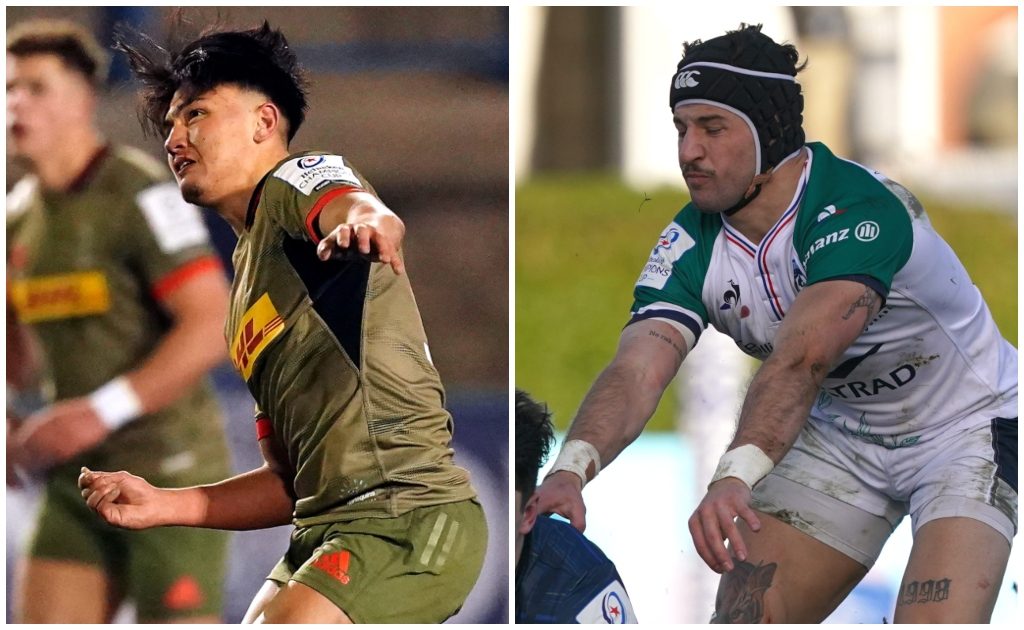 Marcus Smith stars again: Once again we’re talking about the individual brilliance of the Harlequins fly-half after his late heroics helped the English outfit to an entertaining 36-33 victory over Cardiff at the Arms Park on Friday. Trailing 33-26 with four minutes left on the clock, Smith showed his class to slip through the Welsh defence before converting his try. He then landed the match-winning penalty with time up to seal another memorable win that he had a big hand in late on. Smith was quick to praise his forward pack and those alongside him in the backline but it’s hard not to single out the young England star, who is set to shine in the Six Nations if he’s given the 10 shirt by Eddie Jones.

Munster fight in Castres: It wasn’t pretty but Munster won’t care about that in the slightest as they made it three wins out of three in this season’s Champions Cup on Friday. To win at Castres takes some doing – just ask the Top 14 this season – but Munster fought tooth and nail for 80 minutes and eventually got their reward late on when number eight Gavin Coombes crashed over to seal a crucial victory. With all the pressure and talk about head coach Johann van Graan over recent weeks, to continue to grind out results shows this squad and coaching staff are very much sticking together as they did what few manage and conquered Stade Pierre-Fabre. Celebrations showed what it meant.

PURE PASSION 😮@Munsterrugby scored in the final moments to clinch a crucial win and secure Round of 16 qualification 👏 pic.twitter.com/M7Wv8dn76A

Wasps: They’ve done it again. After shocking the leaders in the Premiership, Leicester Tigers, this time Lee Blackett’s men stunned the defending European champions. The English outfit were also hampered following what we thought was a harsh red card for Jacob Umaga in the first half. At that point they were only 14-10 ahead but the hosts showed tremendous fight and quality to claim a 30-22 triumph in Coventry. Alfie Barbeary was again excellent while the rest of the pack also dealt manfully with the French side’s heavy duty forward eight. A superb effort.

Green light for Wales and Scotland: What fantastic news for those nations and also the neutrals as we’ll hear a roaring home support sing Hen Wlad Fy Nhadau and Flower of Scotland at the Principality Stadium and Murrayfield respectively in February and March. This is because of the lifting of restrictions on supporter attendance at sporting events and it comes as a huge fillip ahead of the Six Nations. Both Wales and Scotland have some of the most vocal supporters in the world and the tournament will be much the better for their presence.

There's nothing like Flower of Scotland at @BTMurrayfield 💙#AsOne pic.twitter.com/QWK3H7lvvv

Leinster’s ruthless display: We’ll talk about Montpellier later but you play what’s in front of you and Leinster saw an opportunity and grabbed it on Sunday. Led by the impressive Josh van der Flier and playing the game at a pace that Montpellier simply could not live with, the Irish province ran their French opponents off their feet and showed slick handling and ideas to keep the scoreboard ticking at over one point per minute. That 82-point victory is the joint third biggest winning margin in the Champions Cup (formerly Heineken Cup). Deadly.

🔨 | Anybody got a number for a good carpenter?@joshvdf is going to need another shelf put in. 🏆

Journalists’ house visit: Last week the Daily Mail reported that a former England international had been arrested by Greater Manchester Police for the alleged rape of a teenage woman. A 41-year-old woman was also arrested and that led to some journalists putting two and two together and getting five as they headed for former Sale Sharks and England fly-half Danny Cipriani’s house, setting up camp outside. One can only imagine how that felt for Danny and his wife Victoria, who said it was “completely unwarranted and wholly unacceptable” in a post on Twitter. We couldn’t agree more and feel these sort of tactless moves must be addressed and punishments given to deter it in the future.

Bundee Aki: It was galling for Connacht, who witnessed their comfortable 28-10 advantage overturned by Leicester Tigers in the final 25 minutes, but the reaction to the defeat from the Ireland centre was unacceptable. After dominating the final quarter, Hosea Saumaki touched down with effectively the last act of the match to give Leicester the win, but the hosts weren’t happy. They – wrongly – felt the wing was in touch and then continued to remonstrate with referee Mathieu Raynal, despite the fact they were, in the official’s words, “100 metres from the screen”. Aki was by far the worst offender, however, and displayed visible anger towards Raynal after the final whistle. It was very poor by the British and Irish Lion who, apart from being very, very wrong, showed no respect to the referee. To his credit, Aki did apologise on social media but, instead of criticising the officiating, he and his team-mates should look at their final quarter. They went away from their normal expansive game plan and decided to try and kick the leather off the ball, which just invited pressure onto themselves.

“If it’s not on the line, you will apologise”

Well handled by Mathieu Raynal IMO as Bundee Aki and others have many words with him after (and indeed before) the final whistle goes.

Like to apologise about my action towards the referee and officials, kids who were watching. Absolutely not needed in this game. Emotions were high and that is certainly not an excuse for my actions. Definitely will take the loss on the chin and will be looking at myself.

Antoine Dupont injury concerns: Rumours are that the world’s best player will be available for the Six Nations opener against Italy but it is concerning when Toulouse aren’t giving a definitive return date. Dupont has been suffering from a knee injury which he picked up last year and played his last game on December 11 against Cardiff. Despite having a plethora of talent at their disposal in the scrum-half position, losing the 25-year-old would be a significant blow for Les Bleus. It would also be disappointing for the competition, with fans of all nations enjoying the brilliance of Dupont over the last few years. Let’s hope the World Rugby Player of the Year is fit in time for the start of the tournament.

Some fears that Antoine Dupont might miss the start of the Six Nations, but Midi Olympique reporting that will not be the case

The France skipper has apparently been struggling with a knee issue but should be back in time to face Italy https://t.co/T1T1C7aAPH

Setback for New Zealand Sevens: Due to the New Zealand government extending their Managed Isolation and Quarantine, the men’s and women’s teams have pulled out of the World Rugby Sevens Series tournaments in Spain. Outside of the Olympics, they have not played in a competition since March 2020 due to the travel restrictions caused by Covid-19 and they will have to wait a bit longer yet. It is not just disappointing for the competition, with fans once again deprived of seeing some of the best players in the world, it is also irritating for two sides that need matches prior to the Commonwealth Games and World Cup later this year. Another giant of sport, Fiji, will also be absent for the Malaga Sevens in Spain after a Covid outbreak in their camp and we wish their players and staff all the best in their recovery.

🚨TEAM UPDATE | Unfortunately due to Covid border restrictions both the @AllBlacks7s and @BlackFerns 7s have had to withdraw from the Malaga and Seville stages of the HSBC World Rugby Sevens Series. Hopefully we’ll see you at the next, @WorldRugby7s! pic.twitter.com/wIYLvgyrQE

Glasgow Warriors’ second half: What on earth happened to the Scottish side in that second period? Glasgow went into their dressing room only 14-10 down and in fact came out from the interval with a converted score that put them 17-14 up. What followed was a good old fashioned shellacking as Exeter turned the screw at Sandy Park in front of their fans, grabbing six tries as they ran the Warriors off the park in a 52-17 victory. Recovering from this defeat needs to be swift as La Rochelle lie in wait at Scotstoun in a match Glasgow simply have to win.

Montpellier’s hammering: If Glasgow’s heavy defeat was bad, this from Montpellier was utterly diabolical as they were demolished at Leinster on Sunday, going down 89-7 in a 13-try thumping. It felt like the towel had been thrown in before they even boarded the plane to Ireland with their largely second-string team selection. The performance was weak at best as Leinster tore into them with try after try, leaving Montpol red-faced towards the end. Yes, the Frenchmen currently have real issues with Covid, but they only needed to look at how Cardiff performed to see that you can still play with passion, intensity and, most importantly, pride. How they respond to this at home this week will be interesting as they face an in-form Exeter.