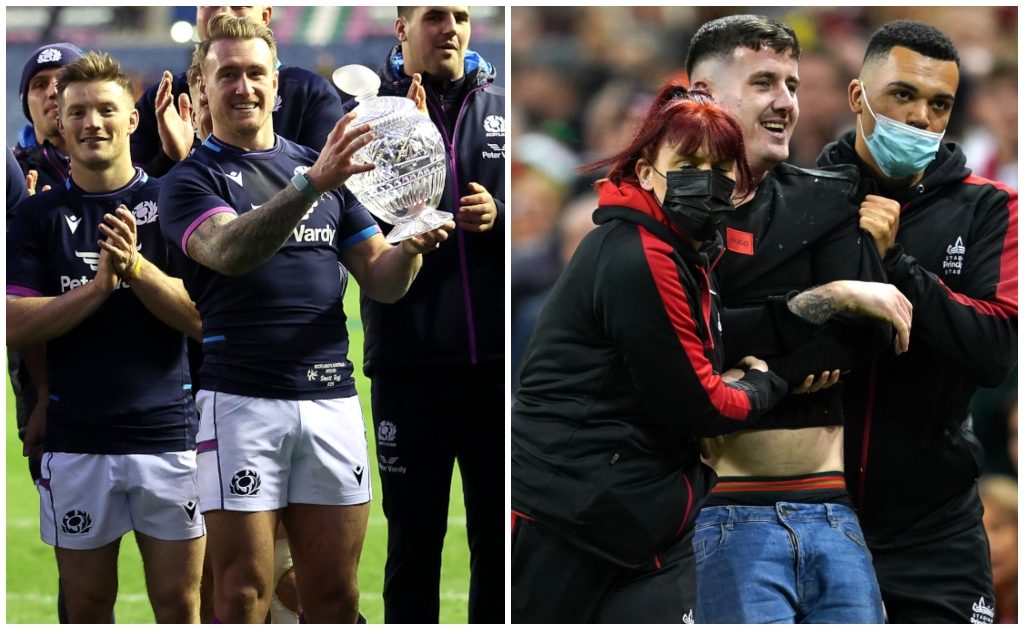 Scotland: The Six Nations outfit have beaten Australia before – in fact it’s now three times in a row – but this felt different. Looking back to the two impressive triumphs in 2017, they had to be at their very best to overturn the Wallabies, while the wins in 2009 and 2012 were based on sheer guts, defensive resilience and quite a lot of luck. On Sunday, Gregor Townsend’s men didn’t even play that well, but they found a way to get the job done, something not associated with Scotland in the professional era. Granted, matters didn’t go Australia’s way, from a couple of disputable TMO calls to Taniela Tupou’s head injury – albeit the latter was caused by bad tackle technique and Sam Johnson’s evidently hard noggin – but this is a genuinely good Scotland team that can now consistently compete with the best, even when not on song.

Hooker Ewan Ashman, on debut, with an outstanding finish. 😲pic.twitter.com/5dI5voVLfR

Ireland’s milestone men: Congratulations to Johnny Sexton, who made his 100th appearance for his country in their fixture against Japan. The 36-year-old has been an incredible servant, helping them to Six Nations titles and a Grand Slam, and became World Rugby Player of the Year in 2018. Despite his advancing years, Sexton’s still playing outstanding rugby and remains Ireland’s first choice fly-half. The pivot was joined by Tadhg Furlong in reaching a significant milestone as the prop won his 50th cap on Saturday. Furlong has arguably become the best tighthead prop in the world and keeps on getting better. It was a great day for both as Ireland cruised to a 60-5 victory.

James Lowe on Johnny Sexton ahead of his 100th cap:

"When he first came onto the scene he was probably overlooked and nobody thought he was going to be the player he is now.

“But he's the second-most expensive 36-year-old behind (Cristiano) Ronaldo in the world!" pic.twitter.com/ym6yZpehxO

Andrew Conway: Although Ireland’s entire team deserves credit for a fine all-round performance in that victory over Japan, Conway receives special praise as he scored his second Test hat-trick – after also notching the feat against the USA in 2018. The Munsterman was in the thick of the action from the outset against the Brave Blossoms as he scored his first try after just 10 minutes and midway through that half added his second crossing before scoring a third five-pointer late in the second period. Conway has become a fine international player.

A lightning start for @IrishRugby! ⚡️

Cardiff’s Taulupe Faletau coup: Times have been hard for the Welsh regions but they’ve recruited well over the past couple of years and this will lift spirits further. Faletau’s time at Bath has been injury-ridden but there is no doubting that he is a top player when fit and will add plenty to their ranks. They have steadily built a very decent side at Cardiff and the addition of Faletau will bring some stardust to the team.

86 Wales caps, 5 Lions test on three tours, one of the best number eights in the world, and he'll be playing at the Arms Park next season!

Ellis Jenkins’ emotional comeback: Talking of Cardiff back-rows, it was wonderful to see the flanker make his Test return, three years after he suffered a serious injury against South Africa. Coincidently, his comeback came against the same nation he sustained that anterior cruciate ligament injury. Despite the loss, Jenkins produced a monstrous effort and everyone in rugby now hopes he builds on that showing.

Three years after smashing a knee @Springboks, Ellis Jenkins @Cardiff_Rugby makes one of the all-time great come-backs on Saturday for Wales. After what he's gone through, no sportsman could be more deserving of a standing ovation for making it back against all the odds.1/1

Newcastle Falcons and London Irish: Amongst all the international action at the weekend, there was a particularly significant result in the Premiership as Newcastle claimed their first ever win at Sandy Park. It once again asks questions of the 2020 double winners, who have been poor by their high standards this season, but all the credit must go to Newcastle. Dean Richards’ men, considering they are fiscally underpowered compared to the rest of the league, have played well so far this campaign and, at the moment, very much look like top-four contenders. Their fellow traditional strugglers, the Exiles, also produced a remarkable result, coming from 34-8 behind going into the final quarter to draw 34-34 at Saracens. What made it even more incredible was that they were down to 14 men after 22 minutes following Adam Coleman’s red card. Well done to both teams, who defied the odds.

Our first ever win at Sandy Park.

This eight-hour bus trip home could get messy!

Cardiff pitch invader: It was dreadful to see that ‘fan’ enter the the field of play during Wales’ game against South Africa on Saturday. What made matters worse was that the hosts were on the attack and his presence potentially interfered with their attack. Needless to say, it was not just a sheer annoyance issue, for both players and sensible supporters, but also a safety problem. It would be a huge shame if stadiums had to increase security for those mindless few who think they can do what they want.

Anyone idiotic enough to invade a Test match pitch should win a prize. They get to tackle Ellis Jenkins. Or Eben Etzebeth. Or Manu Tuilagi. Or Ben Tameifuna. Then the players get a go with them.

Japan: That what was some step backwards from the mid-year series where the Brave Blossoms ran Ireland so close. Although they have barely played since the 2019 World Cup, it was an abysmal performance from Jamie Joseph’s men, who were all over the place defensively. They were also comprehensively beaten in the set-piece and, as a result, they never got any front foot ball to weave their magic. Although Japan are rarely dominant up front, they have usually done a very good job at getting stability, against even the best teams, but it is all too easy for their opponents at the moment.

Japan down a player, Ireland choose a scrum (rightly) but doesn't go to plan.

It's been a half to forget for Japan.

Ireland have been very efficient with their chances and punished a poor Japan defence.

Alun Wyn Jones’ injury: The diagnosis was not good following the legendary second-row’s shoulder injury picked up against New Zealand. Wayne Pivac has stated that Jones is likely to miss the Six Nations in what is a huge blow for the player, his region, the Ospreys, and Wales. Considering his position and his age, the lock has been remarkably durable, but you wonder how many more hits he can take. It would be incredible to see him at the 2023 World Cup but this is a significant setback. We wish him and fellow injury-stricken forward Ross Moriarty, who also requires a shoulder operation, all the best in their recovery.

Wayne Pivac says Alun Wyn Jones is likely to miss the 2022 Six Nations due to his shoulder injury.

BUT Pivac also says he thinks Jones could play at the 2023 World Cup.

An out-of-sorts New Zealand: It might look strange putting the All Blacks in this section after a 47-9 victory over Italy, but they were significantly under-par in Rome. Errors aplenty marred their performance and to be held 0-0 until the 28th minute against the Six Nations whipping boys will have irked head coach Ian Foster. Yes, they pulled clear in the end and scored seven tries in all, but there’s much to work on over the week as they prepare for much tougher tests in November. It’s fair to say some players didn’t do their selection chances much good.

Italy currently holding the All Blacks with 22 minutes gone in Rome, and that was despite a try being ruled out incorrectly#ITAvNZL

Carl Hayman’s dementia diagnosis: Another great of the game has revealed the awful news that they are suffering with early onset dementia after no doubt sustaining repeated blows to the head during his rugby career. As a result, the former All Black tighthead has joined the lawsuit against the game’s governing bodies and there may well be more players following. If anyone needed reminding as to why there has been a clampdown in head shots, this is it.

So sad to see another player being diagnosed with early onset dementia.

“There will be a lot of guys out there who haven’t come forward. We need to let them know they’re not alone”

Viliami Fine: We can understand a player’s desperation to want to make an impact, particularly when you are relatively new on the Test scene, but Fine’s hit on Marcus Smith was utterly thuggish. With the England fly-half lying supine on the floor, the replacement back decided to put his arm into the head of Smith, which unsurprisingly led to a red card. Fine had already produced a poor tackle attempt only moments earlier, but then proceeded to take matters even further on a defenceless player. Not good, and a lengthy ban surely awaits.

Viliame Fine could've got a yellow and a red in one ruck. Mindless stupidity.