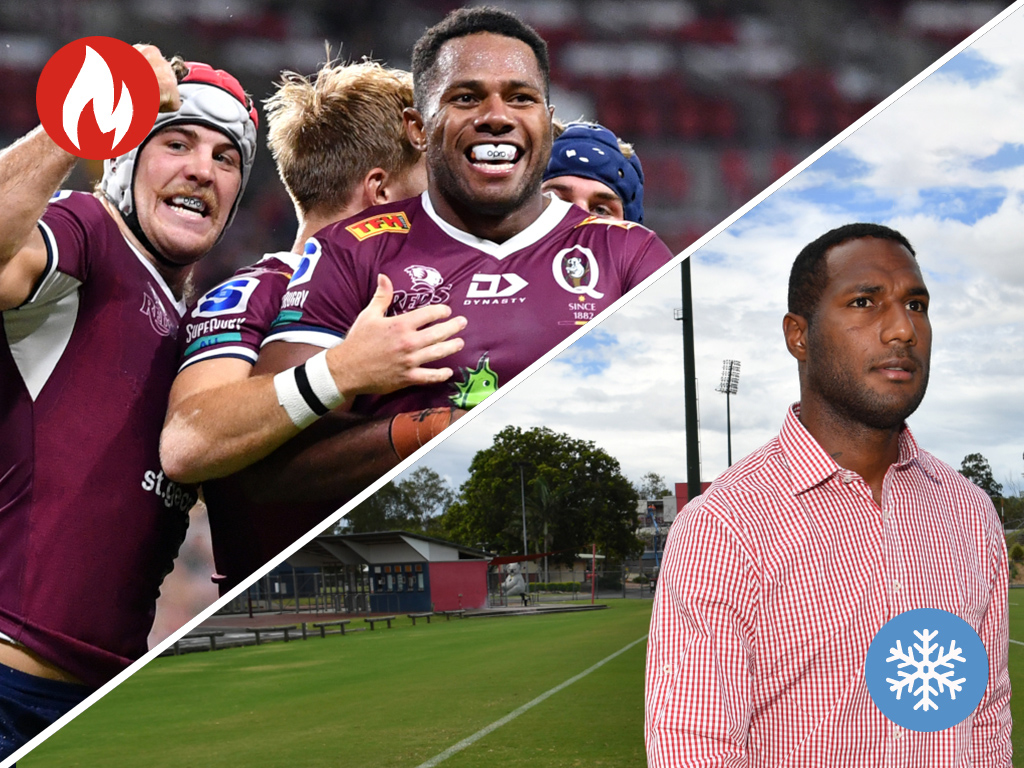 Northampton Saints and Harlequins: What a win for the Saints, who went to the home of defending champions Exeter Chiefs and came away with a 13-12 triumph. They were excellent throughout, defending stoutly against an Exeter side that are so potent from five metres out. Although there was a controversial incident at the end, where referee Christophe Ridley deemed that fly-half Joe Simmonds had started his run-up for a conversion that would have snatched the win, it would have been harsh on the Saints, who controlled much of the match. They join Harlequins in the top-four, with the Londoners continuing their fine form by overcoming fellow play-off contenders Sale Sharks. Quins were superb in the first half, going 21-0 ahead, and although the visitors responded with two tries in the second period, the hosts went away with a 24-12 success.

The battle in Conference A: While Munster appear to have already wrapped up one of the places in the PRO14 final, the other is very much up for grabs. Leinster, given their sheer brilliance over the past few years, have to be the favourites, but Ulster are hot on their heels. Indeed, their only defeat in the league this season came against the Dubliners. A solid 19-13 triumph over Glasgow Warriors keeps them in contention and, with Leo Cullen’s men looking slightly more fallible against the Dragons, Dan McFarland’s charges will fancy their chances of upsetting the defending champions. The encounter between the two in early March will be pivotal.

An interception, slick passing, and an explosive breakaway gives @UlsterRugby the lead just before the break! ⚪

Fantastic play and a finish to match from Michael Lowry 👏 pic.twitter.com/93r6VRmXKd

Reds: A lot was said and written about Brad Thorn’s young side after they finished as runners-up to the Brumbies in last year’s inaugural Super Rugby AU competition. And the men from Brisbane certainly hit the ground running in this year’s tournament as they claimed a 41-7 victory over their arch rivals, the Waratahs, at Suncorp Stadium on Friday. Stand-in skipper James O’Connor led the way with a fine goal-kicking display – he finished with a 16-point haul after succeeding with five penalties and two penalties – while Filipo Daugunu (2), Jock Campbell, Alex Mafi and Ilaisa Droasese all crossed for tries. The result showed a statement of intent from the Reds and sets them up nicely for their next match which is also in Brisbane against the Melbourne Rebels this Friday.

Sharks’ star signing: The Durban-based outfit bolstered their forward stocks by luring South Africa’s World Cup-winning captain Siya Kolisi to their camp for the upcoming season. Kolisi’s move to the Sharks came as a shock to many supporters as it means he ends an 11-year association with Western Province Rugby and the Stormers, who he has represented throughout his professional career. In announcing his move, the flanker said he “always had a desire to be the best, and play with the best, to reach my potential on-and-off the field.” That will be music to the ears of Sharks head coach Sean Everitt, who will be hoping Kolisi’s leadership, energy and all-action style of play will be a shot in the arm for his team.

Good week for Willis Halaholo: The 30-year-old was beaming from ear-to-year after finally making his Test debut for Wales in their 25-24 victory against Scotland in a Round Two Six Nations encounter at Murrayfield last weekend. Halaholo was part of Wales’ set-up in 2019 and due to play against Barbarians before a knee injury forced him to pull out of the squad. He came on as an injury replacement for Leigh Halfpenny late in the first half against the Scots and played well – even setting up Louis Rees-Zammit’s match-winning try. Following that fine start to his Test career, things got even better for the centre as he also signed a new long-term deal last week to remain at Cardiff Blues where he has been a fans’ favourite since joining the PRO14 outfit in 2016.

The infamous five: There has been plenty of debate around red cards over the past few years and it all rather came to ahead at the weekend as a staggering five players were sent off in the Premiership. On Friday, in the Bath v Gloucester clash, Mike Williams and Val Rapava-Ruskin received their marching orders, before the Leicester v Wasps encounter saw three red cards, with Jasper Wiese and Hanro Liebenberg being sent off for the Tigers and the visitors’ Kieran Brookes paying the price for making contact with the head of an opponent. None of the incidents were particularly malicious but they were dangerous and, as a result, the individuals involved could have very few complaints about the decisions.

Hanro Liebenberg picks up the third red of the game and our fifth of the weekend. 🟥#GallagherPrem pic.twitter.com/Ct3uhjzeJh

Izaia Perese and Waratahs: It was a day to forget for Perese and his new team, the Waratahs, when they faced his former side the Reds in the opening Super Rugby AU match of 2021. Apart from finishing on the losing side, little went right for the 23-year-old as the Waratahs struggled from the outset and late in the first half he was red carded for a tip tackle on his direct opponent, Hunter Paisami. The hit was dangerous and a lengthy suspension awaits Perese. Meanwhile, Waratahs head coach Rob Penney has plenty to work on as his team were never at the races against the Reds and the Sydneysiders came off second best in most facets of play.

French Covid cases: After an excellent start to the Six Nations, courtesy of victories over Italy and Ireland, France’s campaign is under severe threat after several members of their squad were diagnosed with coronavirus. Initially, the squad were self-isolating after a member of the backroom staff returned a positive Covid test but alarm bells are now ringing as head coach Fabien Galthie, his assistant William Servat, star scrum-half Antoine Dupont, captain Charles Ollivon and several more also tested positive for the virus. They will not feature in Les Bleus’ next match against Scotland in Paris this weekend. We wish those squad members who are ill a speedy recovery, although questions will be asked of the French hierarchy, with reports suggesting that the outbreak came from the Sevens side. They were invited to train with the first team, which went against the protocols laid out before the start of the tournament. If that is all confirmed following the investigation, it was a rather stupid and avoidable situation.

🗣️ "He will remain in isolation for the next few days."

Suliasi Vunivalu: There was plenty of fanfare when the 25-year-old came over to rugby union from league late last year and after playing a leading role for the Melbourne Storm during their triumphant NRL Premiership campaign, he was parachuted into the Wallabies squad during last year’s Tri-Nations, although he did not play in any Tests. Fast forward to this year and things have gone pear-shaped for Vunivalu, who was dropped from the Reds’ squad for Friday’s Super Rugby AU opener against the Waratahs after he received a AUS$10,000 fine for allegedly pushing a security guard during an altercation in a Brisbane pub last month. He is also set to appear in court on April 19. Not a good start to his career in the 15-a-side code.

Benetton: Their disastrous season continues as they lost their 11th game in succession during the 2020/21 PRO14 campaign, succumbing 41-17 to the Scarlets. They were once the standard-bearers for rugby in Italy, with Zebre trailing in their wake, but Benetton have been overtaken by their intra-country rivals. The decline has been stark and rather sums up the current state of Italian rugby following the struggles of the national team. It was all too easy for the Welsh region on Saturday, like it has been for a number of sides this season, and you wonder whether they will actually taste success in the league for the rest of the year.

Brilliantly evades multiple tackles for his second try of the game, and a third for @scarlets_rugby 🔴 pic.twitter.com/x1IgUSjPX6