Home Who's hot and who's not Who’s hot and who’s not: Munster, Cardiff, Finn Russell, Champions Cup 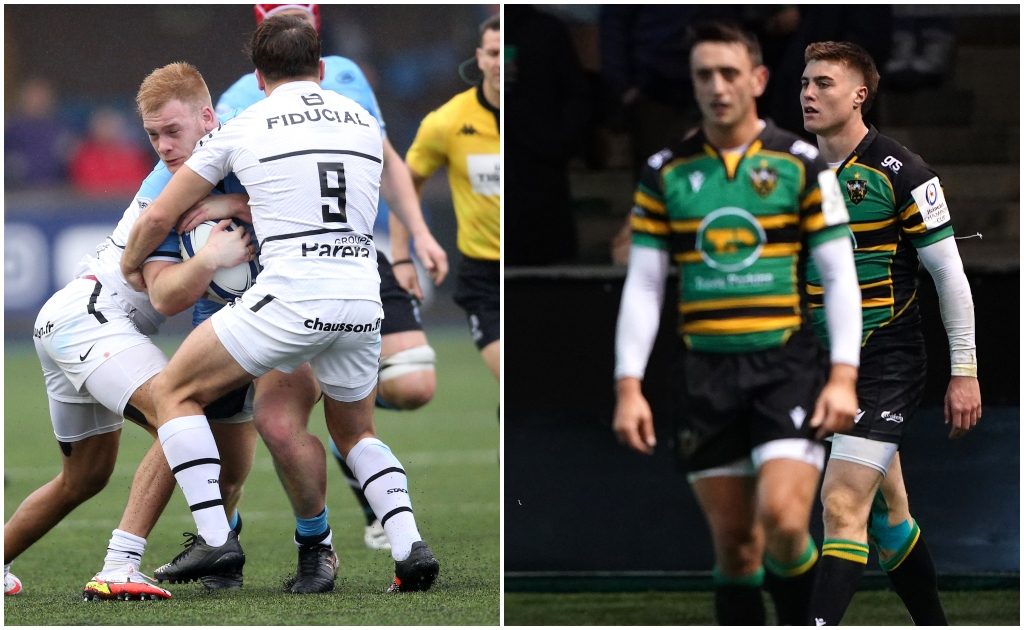 Cardiff and Munster’s young guns: The Welsh region may have lost the game at home but they won a lot of hearts after their severely understrength side competed manfully against reigning Champions Cup holders Toulouse. Due to 42 players and staff having to isolate after returning from South Africa, they were hugely depleted, but the team that went out there produced an incredibly brave display. There were some experienced internationals on the field but it was primarily academy players and semi-pros. Against the might of the French giants, they had no chance of winning but they were a credit to themselves and their region on Saturday. Credit too for Munster, who suffered a similar predicament before the match but, unlike Cardiff, they weren’t facing the fully-loaded defending champions. The Irish province’s performance was mightily impressive but Wasps were themselves without a significant chunk of their squad and made the visitors’ job slightly easier. Both Cardiff and Munster, however, will rightly be proud of how their sides performed and will take plenty from the weekend.

👏 Well played Cardiff, you've done yourselves, your families and your region proud in very difficult circumstances.pic.twitter.com/CQHJ617wm7

Finn Russell and Racing 92: Form is temporary and class is permanent was very much the takeaway from Racing’s 45-14 victory over Northampton Saints in the Champions Cup opener at Franklin’s Gardens on Friday. Led by the mercurial Russell, who played a significant role in several of their tries, the Parisians put their disappointing Top 14 results to one side as they crushed their European pool rivals in a five-try win. Wenceslas Lauret crossed three times as he was named player of the match while Juan Imhoff grabbed a brace, but it was the quality showing of fly-half Russell that stole the show. He oozed class all night with this montage showing some of his best bits from Friday.

Leicester Tigers and Ulster: Not too many teams go to France and win, but those two sides managed it following superb victories over Bordeaux-Begles and Clermont Auvergne respectively. Steve Borthwick has done an outstanding job at Leicester and he and his coaches put together the ideal game plan to negate the Top 14 leaders. It wasn’t pretty but the Tigers, through their outstanding half-backs, controlled field position and territory, stopping UBB from gaining any momentum. Ulster were similarly impressive and controlled the first 30 minutes of their away game to go 16-0 ahead before the home side came back into the contest. Clermont were 20-19 in front at one stage but the Irish province finished superbly and deservedly sealed a 29-23 victory at the Stade Marcel-Michelin. Well played both teams for their exploits.

That's a MASSIVE win for @LeicesterTigers! 🐯

The #GallagherPrem leaders defeat Top 14 table-toppers Bordeaux in their own back yard.

World Rugby award winners: Congratulations to all of those who were crowned best in field over the past week as the World Rugby Awards were trickled out. It all began with Damian Penaud and Emilie Boulard picking up the try gongs for 2021 and a special refereeing award for long service to the game being given to Australia’s Andrew Cole. Following that, Marcos Moneta and Anne-Cecile Ciofani won the Sevens Player of the Year prizes before England forward Zoe Aldcroft was named Women’s 15s Player of the Year, adding to Red Roses boss Simon Middleton being crowned coach of the year in a superb double for that team. Last but by no means least, France scrum-half Antoine Dupont took the Men’s award after an outstanding year for both Toulouse and Les Bleus. What a player the thrill-a-minute number nine is.

Starting to reach a level of fame in France that goes beyond rugby pic.twitter.com/CHCkN7VkFH

Big signings in the Premiership: Even before their excellent win in Bordeaux, Leicester received a boost as they confirmed the signing of South Africa’s World Cup-winning fly-half Handre Pollard. Following the shock departure of George Ford to Sale Sharks, the Tigers searched for a high quality replacement and they have found it with Pollard. Meanwhile, another Springbok on the move is Saracens’ Vincent Koch, who has agreed a deal with Wasps. This one came as a surprise but no doubt salary cap issues played its part, with Koch commanding a hefty wage following the tighthead prop’s exploits over the past couple of years. It’s an impressive addition for the Midlanders, who have needed to strengthen the set-piece, but it is also a blow for Sarries as they will sorely miss his presence in the tight exchanges and also around the field.

New Zealand’s double deal: Another week and more business has been done by New Zealand Rugby (NZR) as they locked in both Joe Moody and Sam Cane to new contracts. Experienced loosehead prop Moody has re-signed with NZR, Crusaders and Canterbury until 2024 and has been a stalwart in the number one spot, racking up over 50 matches for the All Blacks and 100 plus for the Crusaders. Meanwhile, Cane has been tied in until 2025 and will now hope to enjoy an injury-free stretch for both the Chiefs and New Zealand after a particularly frustrating year. As has become a theme these days, an option of taking a non-playing or playing break from the New Zealand game has been built into Cane’s deal in 2024, which is a smart move by the governing body as players can either rest or boost their income with a stint away.

Northampton Saints: What was that, Saints? Racing, inspired by Russell, were brilliant but, when you give a team that talented a 13-0 lead early on, what do you expect? Northampton lacked intensity, were not physical enough and just made far too many errors as the French outfit romped to a dominant victory. It was all very frantic and you rather struggled to understand what Saints were trying to achieve, other than randomly throwing the ball without actually going forward. For a side that has played well this season, it was an extremely poor display.

A tough night, but thank you to those who turned out at the Gardens in support 👏 pic.twitter.com/XgTftUPXcI

Champions Cup mess: While it was a difficult situation for all involved, seeing Scarlets forfeit their clash with Bristol Bears and having Cardiff and Munster field severely weakened teams rather undermined the competition. Could the EPCR have rearranged the games? Who knows, with the calendar packed with matches, but it certainly doesn’t look great for the governing body or the tournament itself. After last season’s group stage was ruined by Covid, let’s hope this is the only disruption and we have no more issues ahead of Round Two and beyond.

Of course they bloody did. You can’t play a professional contact sport after spending 10 days in a room.

Ospreys hooker hospitalised: Our thoughts and that of the rugby community have been with Ospreys hooker Ifan Phillips this week after it was revealed he is being treated for “life-changing injuries” after being involved in a road traffic collision. 25-year-old Phillips – the son of former Wales and Neath hooker Kevin Phillips – suffered the injuries in Swansea on Sunday and is being treated at Morriston Hospital. A JustGiving page has reached the £50,000 target set to help Phillips and his family with the adjustments and rehabilitation he’ll need in the future which is a positive in hard times. We can’t imagine what they’re going through but the growing contribution to help them is admirable.

Jurie Roux: It was bad news last week for the current SA Rugby chief executive as he lost an appeal in court and was ultimately ordered to pay Stellenbosch University ZAR 37m (c.GBP1.9m). The judgement came after a court arbitrator found that the money was missing and had been misappropriated from the accounts of the Stellenbosch University to the university’s rugby club during a period (2002-2010) while he was working at the university’s accounts department. The arbitrator did not hold back in the ruling, saying Roux’s strategy was “glaringly evasive” and his evidence also “evasive and argumentative, and smacked of sophism”. Surely his position at SA Rugby is now untenable?

Concern for Joey Carbery: Munster’s impressive victory over Wasps came with a touch of disappointment late on when fly-half Carbery left the field with a shoulder in a makeshift sling. After putting in an excellent showing – adding to recent strong efforts for Munster and his country – this was such a frustrating sight for a player who’s been hindered by injuries in recent years. One hopes it’s nothing too serious as both Munster and Ireland desperately need Carbery fit and firing if they are to challenge for silverware. We keep our fingers crossed for him.

A major downer on what has otherwise been a brilliant day for Munster.

Stade Francais’ performance: Take nothing away from Connacht’s eye-catching showing but Stade did not help themselves at all at the Sportsground. Whether it was missed kicks to touch, due largely to the strong winds, or opting to take three points instead of backing their attacking game, this was a performance that left a lot to be desired from the Paris outfit. Players looked out of sorts and it was obvious they missed the quality of Ngani Laumape and Waisea Nayacalevu at centre. Connacht also had missing stars though so not a good day for Stade.

The Galway gales are a fickle beast!

Stade look to kick a standard penalty to touch, but before they know it, it turns into a Connacht 50:22!#CONvSFP #ChampionsCup pic.twitter.com/WyruvPSU9L