Home Who's hot and who's not Who’s hot and who’s not: France dominate Europe, Richie Mo’unga boost for All Blacks and confusion at Bath 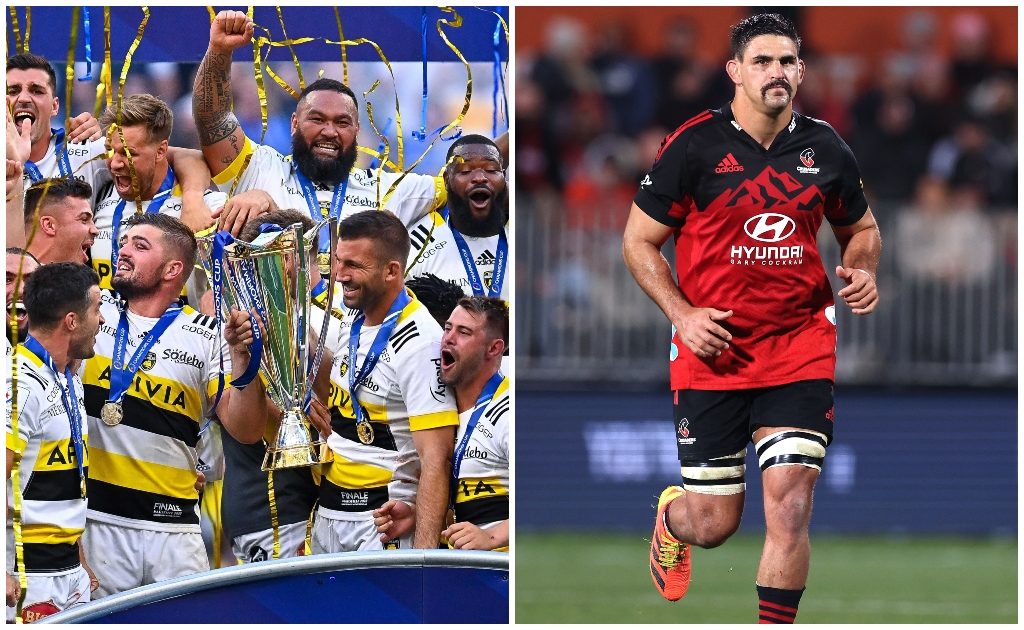 La Rochelle conquer Europe: What a final and what a performance from the French outfit! Ronan O’Gara’s men surprised everyone, including us, by beating four-time winners Leinster and claiming their first Champions Cup title. They were outstanding throughout, with their pack putting in a mammoth effort and their defence stopping the Irishmen from getting any fluency. La Rochelle thoroughly deserved their victory and it will be interesting to see if they can take this momentum into the Top 14 as they seek to claim the double. A word too for Ihaia West, a player that was under the microscope given his previous struggles in big matches, but the fly-half was superb. West was faultless off the tee and controlled the game superbly. Well played, Ihaia.

Lyon claim the Challenge Cup: That was some performance from Lyon in the Challenge Cup final as they comfortably overcame rival French side Toulon on Friday, winning 30-12. They were hugely deserving of their victory as they pulled clear in the second period and arguably should have been further ahead than they were at the break but for Davit Niniashvili’s mistake over the whitewash. Toulon had no answer to Lyon’s game in Marseille as they won their first ever European trophy. Congratulations to the club and its supporters who were delighted at the end.

Tonga reap benefit of new eligibility laws: Not one, not two, not three, but four ex-tier one nation internationals have been unveiled as part of Tonga’s Rugby World Cup play-off side after an amendment to World Rugby’s international eligibility rules. The controversial Israel Folau has been picked after being sacked by Rugby Australia in 2019 for homophobic comments on social media. Former All Blacks Charles Piutau, Malakai Fekitoa and Augustine Pulu are also included and these four nation-switching stars will offer Tonga a much-needed boost head of their final push for a ticket to France next year. How good would it be to see Tonga competing consistently with the world’s big boys.

Made my feelings on Folau pretty clear over the years.

His inclusion in Tonga's squad has overshadowed the awesome news that they have selected Fekitoa and Charles P.

Andre Esterhuizen named the Premiership’s best player: After yet another stellar season for the reigning Premiership champions, bulldozing inside centre Esterhuizen has been voted as the men’s Players’ Player of the Season. The decision, made by his peers, comes as a result of the South African’s midfield dominance with 1,721 metres gained, eight tries scored, 16 clean breaks and 60 defenders beaten over the campaign to date. Consistency is Esterhuizen’s game; the Springbok has been ever present for Quins, never not starting and never taking his foot off the gas. The recognition is well-deserved and surely an international call-up beckons for South Africa as he deserves Bok minutes.

🤯 Andre Esterhuizen is like having a cheat code. #COYQ pic.twitter.com/h9fR4pzpQa

Richie Mo’unga boost for All Blacks: Outstanding fly-half Mo’unga has committed to the Crusaders and New Zealand Rugby ahead of the 2023 World Cup on a one-year extension. The number 10, who battles Beauden Barrett for a starting jersey, has been a key piece for the All Blacks in recent years after he debuted in 2017 and will be vital for the Kiwis in France next year. The double-headed monster of Mo’unga and Barrett will prove to be a handful for all opponents as New Zealand look to recover glorious past-form and re-claim the Webb Ellis Cup.

Freddie Steward rewarded for great season: Leicester’s fantastic six foot five full-back continues to shine both at Welford Road and internationally for England having secured the number 15 jersey for both outfits. Steward was duly rewarded for his performances after he came away with both the England men’s Player of the Year and Young Player of the Year awards, which is not a bad evening for the young flyer, who only made his senior debut just over three years ago. A long and fruitful career at both levels is surely a given for a superb player.

George Skivington awarded new contract following Gloucester revival: Pre-season, nearly everyone had written off Gloucester’s chances of contending in the Premiership season after a dire 11th place finish the year before. The lack of obvious star-power on the side was not an obstacle for head coach Skivington, who has shocked the league by elevating Gloucester up the ladder, narrowly missing out on a play-off spot. For his efforts, Skivington has been rewarded with an extension to his current deal so that he can continue the progress made so far.

Gloucester probably won’t make the play-offs and George Skivington probably won’t be Premiership coach of the year, but what a job he is doing at Kingsholm. They look in as good a shape as I have seen them for years.

A theme in Leinster’s European defeats: The Irish province have still only claimed one Champions Cup title in the past decade – in 2018 – and there has been a common issue in those recent losses. Against Saracens in 2019 and ’20, as well as the last two defeats to La Rochelle, they have really struggled against big packs who have knocked them out of their stride. Leading into this final Leinster looked imperious, but they failed to find their rhythm on Saturday, which is a concern to the province but also for Ireland. Credit must go to O’Gara and his coaches, who came up with an excellent plan, but to be honest Leinster didn’t really look like themselves throughout the 80 minutes. You therefore have to question their mentality in these types of matches and, equally, their ability to problem solve. Considering that this is basically the Ireland team, it may well be a worry looking ahead to the World Cup.

Heartbreak at the finish.

Player welfare concerns for Davit Niniashvili: Apart from butchering a try, the young Georgian was outstanding in Lyon’s victory over Toulon, but by the end everyone was left discussing the head injury he suffered and the poor care he received. Niniashvili had just put in a big hit on Eben Etzebeth when the Springbok lock wanted to get his revenge. Etzebeth put in what looked to be a cheap shot on the wing, leading to the 19-year-old lying supine on the ground. The medics then somehow let him stay on the pitch where he was left staggering before he was finally withdrawn. It was obvious to everyone that Niniashvili needed to be replaced immediately,  but it took a good couple of minutes until a sensible decision was made. There has been progress in regards to player welfare but this was poor from all involved.

Whatever about the clear out, the way Niniashvili stumbles back into the defensive line here leaves no argument that he should have stayed on afterwards.

Lyon's medics and the officiating team have to do better here. Rugby has to do better. pic.twitter.com/IJAsPvNWmW

More confusion at Bath after new structure revealed: Bath chairman Edward Griffiths has left his role after an internal restructure saw him depart following just a few months in the job. However, Stuart Hooper remains at the club – much to the annoyance of some fans – by taking the general manager position after being director of rugby of the struggling side. Griffiths led the Saracens revolution and seemed to be exactly the right person to revitalise an ailing Bath outfit, but he appeared to rub a few people up the wrong way. Obviously, if he has stepped beyond the line then the decision made is understandable, but it all appears a bit too comfortable at the West Country outfit at the moment. They need someone to shake it up and maybe Johann van Graan is the right man to do so next season. Certainly not a happy camp.

The wheels are officially off @BathRugby.

Ed Griffiths wanted to make changes but certain characters got wind of it and went to ownership.

At least one England international has asked to be released.

Yesterday instead of going training the team got on the beer.

Pablo Matera somehow avoids red card for shocking clearout: The Crusaders back-row was very lucky to only receive a yellow card after a dangerous tip tackle on Reds flyer Jordan Petaia in their Round 15 Super Rugby Pacific encounter in Christchurch on Friday. Matera came charging into a ruck and lifted Petaia before dropping him almost directly on his head. It was a shocking challenge and referee Ben O’Keeffe’s decision to only issue a yellow card for the infringement was abysmal as several offences – which have been arguably less severe – saw the perpetrators receiving red cards.

Third yellow spells end of season for Jono Ross: It’s three strikes and out for the veteran Sale Shark, who was shown another yellow card in the last Premiership round against Wasps. Ross breached World Rugby Law 9.28 which states that a player must not disrespect the authority of a match official. This third yellow means the back-row forward will be unavailable for selection for the final round of England’s top-tier where his side host Bristol. Discipline has been a constant issue for Sale over the past few seasons and captain Ross has set that tone.

Oh Jono Ross got a yellow card for a change.

Well, it not being for a dirty challenge, is actually a change. #WASvSAL

Football becomes most popular sport in Wales for the first time: It’s a sad day for all of those fond of chasing egg-shaped balls in Wales as football has overtaken our beloved sport as the most popular in the nation. The perfect storm of international rugby failure and football success has caused the tri-annual poll by Nielsen for UEFA to swing in favour of the so-called beautiful game. In 2019 rugby led football with a 42% to 39% approval rating lead but 2022 has seen rugby slip behind with a scoreline of 45% to 47%. With regional rugby union in disarray, the Welsh Rugby Union struggling and the national side also faltering, a massive upheaval is needed if they are to reverse the trend.