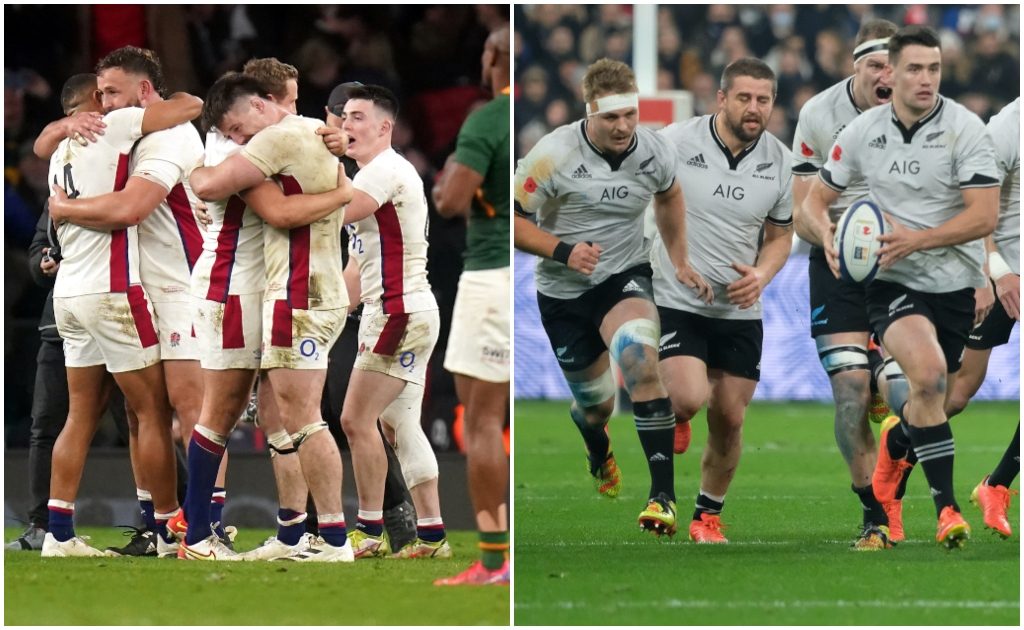 England upsetting Springboks: The more kick off approached at Twickenham, it felt as though the chances of an England victory were reducing. That was also the view of the bookmakers as on paper South Africa’s team looked stronger and they were expected to have added determination after the week they’d had. All credit to England though as they were outstanding as a young spine, including Marcus Smith and Freddie Steward, starred in their 27-26 victory, which wowed their supporters and gave the team plenty of encouragement to take into the Six Nations. Head coach Eddie Jones was delighted with the showing and rightly so, to beat this dominant Springboks side is some feat.

France’s momentous victory: Probably the performance of the weekend came in Paris on Saturday evening when France fulfilled a good deal of their potential as they dominated New Zealand for large periods of the contest. The first half was outstanding from Les Bleus as they proved last week’s unconvincing victory over Georgia wasn’t anything to worry about. The All Blacks could not live with France’s power in contact and defence with a sprinkling of magic added by the likes of Romain Ntamack and Antoine Dupont. Peato Mauvaka scored twice while a mention must also go to Jonathan Danty at centre. France deserved this win as a World Cup charge at home in 2023 looks ominous.

Stuart Hogg on his own: The smile said it all from Hogg in the first half against Japan on Saturday when he crossed for his 25th try for Scotland. That score moves him ahead of Tony Stanger and Ian Smith at the try summit for the country and there’s no doubt many more to come from the Exeter Chiefs full-back. Part of a Scotland team that beat the Brave Blossoms 29-20 at Murrayfield, the win and try capped a memorable day for Hogg as he continues to lead by example. His interview at full-time showed just what it means so we’re delighted for him.

Sale’s box office signing: The rumours of George Ford leaving Leicester Tigers for a possible move to Sale Sharks surprised a good few rugby followers. But when the deal was confirmed on Wednesday, rumours became reality as the Sharks added a significant piece to their jigsaw for 2022/23. To leave the Tigers next term with them flying high in the Premiership might surprise some but with Ford a northerner, being born in Oldham, and Sale being determined to become a title winning side, this signing was clearly one Alex Sanderson and his chiefs wanted to get over the line. Credit to them, they did it and it will now be interesting to see him link up with Raffi Quirke and Manu Tuilagi.

🗣️ "He's a northerner and his heart is very much in this area."

Ireland rounding off in style: Continuing the northern praise, it’s hard not to be impressed by what the Irish have produced during their end-of-year internationals. After beating Japan and New Zealand, on Sunday they backed that up with a record victory over Argentina to end what has been a fruitful month. All seven of their tries came via their forward pack as their power game when in the opposition red zone is a sight to behold. It’s not just up front they have impressed though, far from it, as they boast a complete game that is entertaining their fans.

Rassie Erasmus saga: What a week it’s been! After all the Springboks director of rugby’s shenanigans during his team’s series against the British and Irish Lions, it came as no surprise when he was sanctioned by World Rugby last week. Erasmus’ 62-minute video rant in which he criticised the match officials – particularly referee Nic Berry – was in bad taste and a desperate move as the Boks had their backs to the wall after they lost the first Test to the Lions. Judging from the verdict of Erasmus’ disciplinary hearing, the Bok boss definitely brought the game into disrepute as he knew the rules regarding criticism of officials. His post afterwards also appears to show he’s not remorseful for his acts.

Media outlet’s reaction to ban: On the whole the South African public’s reaction after Erasmus’ suspension has been one of support for the Boks’ director of rugby. While many around the world feel that he crossed a line, standing by the man who led them to Rugby World Cup glory is fair enough and there is no problem there in our eyes. However, SA Rugby magazine have not held back on World Rugby with claims of racism and expletive comments about its chairman Sir Bill Beaumont quite staggering. In a video chat, one of their journalists unbelievably mentioned Australian referee Berry, who has struggled with the fallout from the first British & Irish Lions Test, in the same breath as Jeffrey Epstein! Surely such statements cannot be tolerated and it would be surprising if nothing came of those awful comments.

The Money Man and Mark Keohane react to the outcome of World Rugby's case against Rassie Erasmus. https://t.co/k0TqmaMRVf

Rob Valetini seeing red: Australia did brilliantly to stay in the contest until the very end against Wales in Cardiff, after they had to play the overwhelming majority of the game with 14 men after Valetini received his marching orders for a dangerous tackle in the 15th minute. The Wallabies number eight’s hit on Wales lock Adam Beard was a reckless one, with head-to-head contact which resulted in blood pouring from the Welsh second-row’s face and it wasn’t a surprise when he failed to reappear on the field after receiving medical attention.

Rob Valetini is sent off for head on head contact on Adam Beard and the Wallabies are down to 14-men.

All Blacks’ poor first half: It’s not often that the All Blacks suffer back-to-back defeats but that’s exactly what happened to them during their Autumn Nations campaign and after their defeat to Ireland in Dublin, they came off second best against France in Paris on Saturday. The opening half against Les Bleus had a lot to do with the end result as the All Blacks just weren’t at the races as the home side dominated most facets of play during that period and held a deserved 24-6 cushion at half-time. Although they launched a mini fightback after the break, the damage was well truly done during that opening half and they couldn’t wipe out that deficit with France eventually sealing a deserved 40-25 victory at the Stade de France. There will be plenty of homework to do for All Blacks head coach Ian Foster as pressure mounts on his role.

Another red for Tomás Lavanini: Known for his lack of discipline on a rugby field, Sunday was another disappointing episode for the Argentina second-row. While his team were already staring defeat in the face against Ireland, his unnecessary and dangerous clear-out of replacement prop Cian Healy was unforgivable and saw him given his marching orders. That is now his third red card on the international stage for the Pumas, which is the most of any player in Test rugby. Going with his seven yellows, Lavanini desperately needs to clean up.