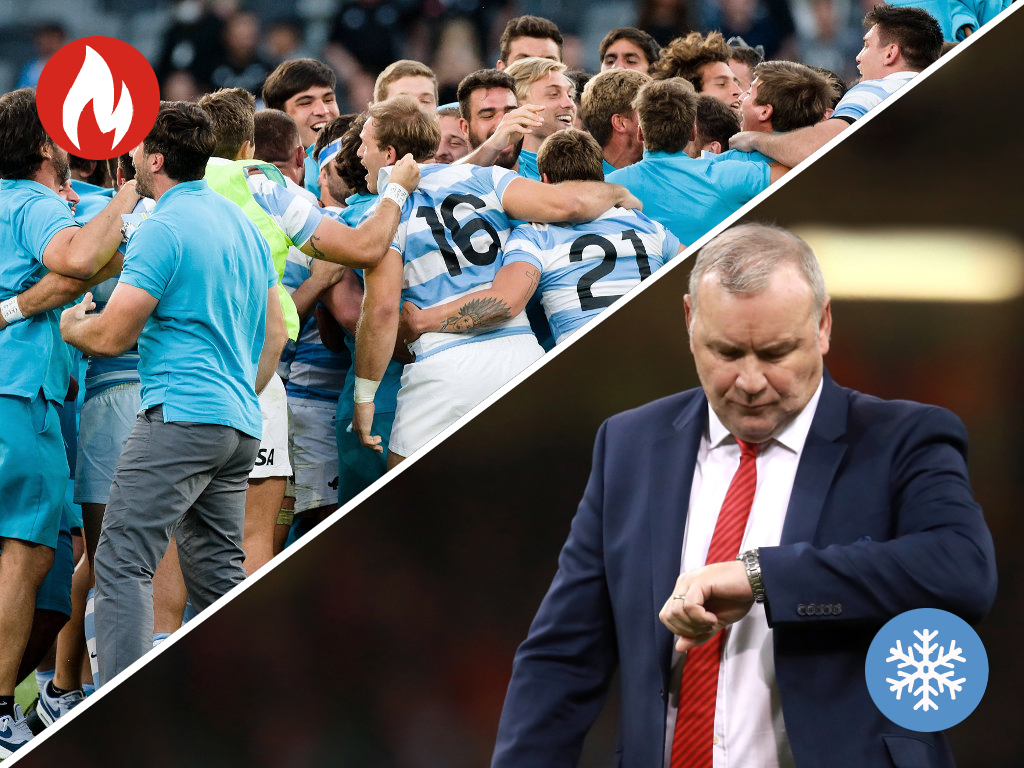 Nicolas Sanchez and Argentina: What a performance! Despite being overwhelming underdogs after playing their last match at the 2019 Rugby World Cup in Japan and several of the team’s players and management staff being struck down with coronavirus, the Pumas delivered an outstanding showing to notch their first-ever victory against the All Blacks. In doing so, Mario Ledesma’s charges recorded what is widely regarded as the greatest result in the history of Argentinian rugby and they were worthy winners as they dominated the match for long periods. Although it was a brilliant team effort, fly-half Sanchez deserves special praise after producing arguably his best-ever performance at Test level. The 32-year-old playmaker came to the fore with a commanding display in which his game management was excellent and he scored all his side’s points in the 25-15 triumph.

• Lineouts with dad
• Scrums in the garden
• Passing in the garage

This is how Argentina prepared for their first Test since the Rugby World Cup.

Today, they defeated the All Blacks for the first time.

Jamie George and Jack Willis: It wasn’t exactly a vintage performance from England but there were some good individual displays, with Willis and George two of those to stand out. The Wasps flanker was making his debut and impressed with his all-round game, winning one jackal turnover and being rewarded for his efforts with a try. Meanwhile, the hooker particularly enjoyed his time against Georgia, touching down three times in the 40-0 triumph. The Saracens man was also typically accurate at the set-piece, throwing well at the lineout and showing his power in the scrum, as the Red Rose dominated up front.

A historic hat trick and a shutout victory 🏴󠁧󠁢󠁥󠁮󠁧󠁿@englandrugby are off the mark in the #AutumnNationsCup with a win over @GeorgianRugby pic.twitter.com/1Qz2tKcROM

Ireland’s New Zealand-born duo: James Lowe was handed his debut while Jamison Gibson-Park started ahead of Conor Murray and both were key to their victory over Wales on Friday. Lowe was a constant menace on the left wing and scored the try his performance deserved with the last move of the match. Meanwhile, Gibson-Park also displayed plenty of quality, dictating proceedings superbly from scrum-half. The 28-year-old’s passing was sharp, providing some much-needed tempo, and his box-kicking often kept Ireland’s opponents on the back foot. Some will criticise the fact that they are playing in green having grown up in New Zealand, but condemn World Rugby’s rules, not the players. Instead, Ireland should celebrate the fact that they appear to have two top quality operators on their hands.

Speed of service fromGibson-Park has been class…

Rugby Australia’s TV deal: There has been an air of negativity surrounding Australian rugby for a while and that crisis only deepened following a disappointing start to Dave Rennie’s tenure as head coach. However, a victory over the All Blacks in the fourth Bledisloe Cup tie lifted spirits before they were boosted further when the governing body signed an AUS$100 million TV deal with Nine Entertainment. After Fox Sports ended their long-term partnership earlier in the year, there were huge concerns but, on the face of it, this move seems a positive step for all involved. It goes some way towards safeguarding the sport financially over the next few years and, with several matches being shown free-to-air, it potentially opens up a new audience for rugby union.

Thank you to @FOXSportsAus and @Foxtel for the memories – and all your support over the last 25 years. pic.twitter.com/lcqUM0RY9T

Australia add NRL star power: The decision by Wallabies head coach Dave Rennie to add NRL convert Suliasi Vunivalu to his Tri Nations squad last week raised some eyebrows but if Vunivalu’s record in the NRL is to be used as a yardstick, he should be a big hit his new surroundings. The new Reds recruit helped the Melbourne Storm to victory in the NRL Final against Penrith Panthers and also crossed the whitewash in the process. Vunivalu is a try-scoring machine, who scored 86 times during a five-year stint with the Storm and Reds and Wallabies supporters are excited by the prospect of seeing the 24-year-old in action soon. Rennie revealed that he is unlikely to select him for the Wallabies this year, saying his inclusion in the squad was merely a way of bringing him into the set-up and upskilling the player, but all the signs are there that Vunivalu will follow the path trodden by fellow league converts like Lote Tuqiri, Israel Folau and, more recently, Marika Koroibete, who all became household names in the 15-a-side game.

🗣️ "Dave Rennie wants to see his new winger in the flesh so that he can see him in close quarters and upskill him as quick as possible, before the winger joins the Queensland Reds."

Ian Foster and New Zealand: Although Argentina fully deserved their victory in the Tri Nations encounter in Sydney, it must be pointed out that the All Blacks looked a pale shadow of the side which were the dominant force at Test level for most of the past decade. After suffering a narrow 24-22 defeat to the Wallabies in Brisbane on November 7, Ian Foster’s troops were expected to strike back against the Pumas but that was not the case as ill-discipline, poor handling and unforced errors were the order of the day from the three-time world champions in Sydney. The pressure is also coming on the head coach, who has overseen successive defeats. It is the first time since 2011 that the three-time world champions have lost two on the bounce, leaving many to question whether Foster has the capabilities to be a success. He was an unpopular appointment among supporters, has never won anything as a head coach and has become the first New Zealand boss to lose to Argentina. That’s a pretty inauspicious record, especially when you only have a two-year contract and there is the extremely talented Crusaders coach, Scott Robertson, waiting in the wings.

Two times the NZRU have passed over a Crusaders coach with multiple Super Rugby titles in favour of someone from Waikato.

Scott Robertson has 5 titles as a player and a coach.
Ian Foster has none.

Wayne Pivac and Wales: Another head coach that is under pressure is the Welsh boss, who has presided over six consecutive defeats. Their latest reversal came against Ireland as they once again struggled in most facets of play in the 32-9 loss at the Aviva Stadium. Following the success Wales enjoyed under previous head honcho Warren Gatland, fans were not expecting their side to struggle this badly. Pivac needs to turn this around quickly, otherwise his spell in charge of the national side could be a very short one indeed.

I’m not calling for Wayne Pivac & co to go yet, but I do lay a lot of Wales’ current problems at his door.

We’re currently floundering between the two of those.

John Kirwan’s comments: We are utterly baffled that there has even been a debate over the red cards handed out to Ofa Tu’ungafasi and Lachie Swinton last weekend. The law is quite clear, while the reason it is implemented in that way is also obvious, so for Kirwan to make such inflammatory comments does not help the game. The former All Black stated: “Our game does not need red cards. People have paid good money to watch a game of rugby with 15-a-side. We need a decision from World Rugby, but this century. Not until something else happens. Lives are at stake, people’s salaries [are at stake].” He’s quite right in some respect, lives are at stake, but it is the lives of those that get hit in the head by illegal tackles from players who lead with their shoulder. If New Zealand and Australia – it wasn’t only one side of the Tasman Sea that were complaining – want to see fewer red cards, adapt your tackle technique or face the consequences. Most other countries seem to have accepted that.

Michael Lipman’s health: Those comments from Kirwan appeared even more reckless when the former England and Bath flanker detailed his health problems following his retirement from the game. Lipman said that he was knocked out 30 times during his career and is suffering from the effects of dementia at the age of just 40. It was horrifying to read and also sad that someone who has given so much to the sport has ultimately been let down by it. Fortunately, rugby has improved its attitude and understanding towards head injuries, but it still has some way to go, as these accounts from former players continue to prove.

1) Michael Lipman's "mild dementia" at the age of 40, after suffering 30 knock-outs during his career. Alarming – and exactly why the high tackle framework and concussion protocols are so important. #sportslaw
https://t.co/SXGiAgaP3Y