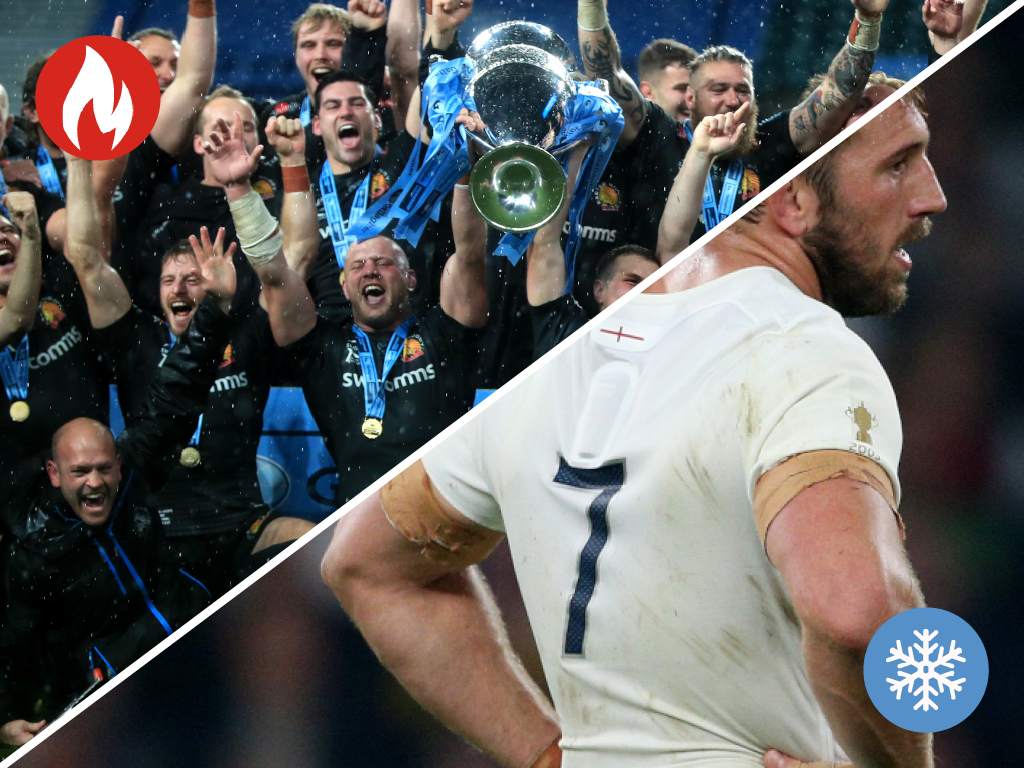 Exeter Chiefs: Credit must go to Wasps after they produced an outstanding effort under difficult circumstances to push the Chiefs all the way at Twickenham on Saturday. But, with the Champions Cup trophy already in their cabinet, Exeter made it a double haul as they picked up the Premiership silverware after edging to a 19-13 victory in what was a gripping contest. The Chiefs’ journey is movie worthy as they have risen up through the echelons of domestic rugby in England right to the very top. Being led by several home-grown players and having a real old school feel to the club makes them many people’s second favourite team so to see them rewarded with two trophies was a pleasing watch.

What a season for @ExeterChiefs, they were simply unstoppable in the #GallagherPrem and lift a second trophy in a week 🏆

Ireland get it done: Andy Farrell’s men did what they had to do against Italy on Saturday as they got the bonus point and also won by a decent margin to give themselves every chance of lifting the Six Nations trophy this weekend. They travel to France, one point above their hosts and England, who face Italy away on Super Saturday, but the Irish will be confident after that 50-17 victory over the Azzurri that saw debutants Will Connors and Hugo Keenan impress. The only negative from the day in Dublin was the injury to form centre Garry Ringrose.

🗣️ "It is bad news for us all and we are gutted for him." #IREvITA

England Women: Six Nations champions with a round to spare after France were held to a 13-13 draw by Scotland at Scotstoun Stadium. France needed a win in Glasgow to take the title race to a final round but they saw a 10-point lead reeled in in the 73rd minute. England are now six points clear at the summit of the table and cannot be caught, with their final match against Italy to come on Sunday, November 1. England head coach Simon Middleton hasn’t started the celebrations just yet, however, as he now eyes up a Grand Slam to add extra gloss.

The Grand Slam is still on for the squad who face Italy on Sunday 🌹 pic.twitter.com/jiMi5uOQMS

Leinster: The Irish province issued a warning to their PRO14 rivals when they scored nine tries in their 63-8 triumph against Zebre at the RDS Arena on Friday night. That result consolidates Leinster’s position at the top of the Conference A standings, after winning all three of their matches in the tournament thus far. Their victory against the Italian outfit means Leo Cullen’s charges have now won 22 consecutive matches in the PRO14 and remarkably their winning streak stretches over three seasons. The last time they tasted defeat in the competition was on April 27, 2019 when Ulster beat them 14-13 in their final league match of the 2018/19 campaign at Kingspan Stadium. Unbelievable.

The hosts on cloud nine at the RDS 😍

Finn Russell’s Test return: He’s back! The maverick fly-half returned to international action on Friday as Scotland cruised past Georgia at Murrayfield. His falling out with head coach Gregor Townsend after a disciplinary issue before the Six Nations earlier this year now seems put to bed as the playmaker finally returned to the Test scene. Russell came on early in the second half with Scotland four tries to one up and the Racing 92 player added a spark as the game opened up in the latter stages. His talents deserve the greatest of stages so it’s great to see Russell back.

Barbarians players: The dumb decision by the Baa-baas players, which included experienced campaigners like Chris Robshaw, Richard Wigglesworth, Fergus McFadden and Sean Maitland, to breach coronavirus protocols by leaving their London hotel so that they could have dinner proved costly as it led to the cancellation of their match against England at Twickenham after a Rugby Football Union investigation. With Covid-19 cases continuing to rise, the players’ actions were incomprehensible and former England head coach Sir Clive Woodward described it best when he said: “I am sure they’re feeling incredibly stupid and incredibly embarrassed. It is just stupidity, they have been ridiculously stupid.” Former England captain Robshaw will be particularly regretful as the match was to be his Twickenham farewell before he joins Major League Rugby outfit San Diego Legion, while England head coach Eddie Jones will no doubt be fuming, as he was hoping to use the game as part of his preparations for their final Six Nations Test, against Italy in Rome this Saturday. Punishments are set to come.

🍻 The drinks are believed to have taken place in Mayfair.

David Pocock’s retirement: It was a sad day last Friday when one of the greats of the modern era announced that he is hanging up his boots after a 15-year stint as a professional rugby player. Pocock was a genuine star of the game whose strength around the rucks and ability to force breakdown penalties was second to none, while he also shone on defence and as a ball carrier for the Wallabies, Brumbies and the Western Force. Although he was a superb player, Pocock also made his mark off the field and is renowned for his activism on environmental matters and social justice. The 32-year-old will continue to work as an ambassador for West Australian rugby and hopes to make a difference in the field of conservation now that he’s retired. We thank him for the memories as a player and wish him well with his future endeavours.

We ❤️ you Poey. All the best in the next chapter. #Wallaby829 #YourTeam #OurJourney pic.twitter.com/YAOSeL3lW1

Wales’ unavoidable record: While they are not playing terribly and could have won against France in Paris, this latest defeat means it’s four negatives in a row for Wayne Pivac’s men. It was an interesting discussion in the ITV studio at full-time on Saturday when former Test players Gareth Thomas and James Hook debated the recent run of results. Thomas rightly said Wales should not drop their standards as a nation after what has been such an impressive decade and we agree with the former international back. This Saturday’s home game against Scotland is now massive as they look to avoid finishing a lowly fifth place in the table, which would be a huge drop from 2019’s Grand Slam.

However, for balance and context, it was a warm-up and the first game of a 6 match series.

We’ll have a much better idea of where Wales stand in early December.#FRAvWAL

Georgia: Friday was a major opportunity for the Georgians to lay down a marker as they continue to push for inclusion in the Six Nations. However, they were comprehensively beaten by Scotland in what is a wake-up call ahead of the Autumn Nations Cup. To concede 48 points that included eight tries at Murrayfield is a serious beating and with their next match being against England at Twickenham it could well be another hiding on the cards before they face Wales and Ireland. A run of heavy losses in November would be a nightmare scenario for the Lelos.

It's half time and I've already changed my mind on swapping Italy for Georgia in the Six Nations. #SCOvGEO

Scottish club duo: Defeat at home to Connacht means it’s now six losses in the row for Edinburgh in what is concerning form for Richard Cockerill. While Connacht were excellent on Sunday and not as hard hit by international call-ups as their hosts, this terrible run of results is worrying for Edinburgh. Compounding Scotland’s club woes this past weekend was Glasgow Warriors losing to Ospreys on the road, which is their second defeat out of three in the 2020/21 PRO14 competition. At least Scotland’s Test side gave the nation something to smile about.