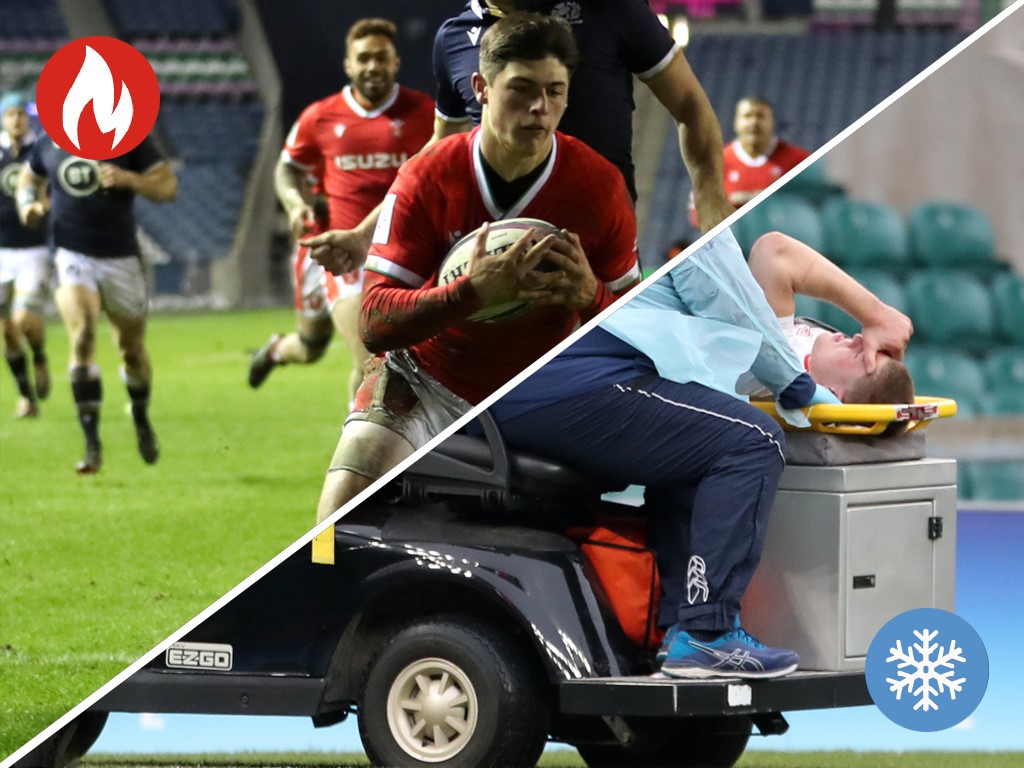 Louis Rees-Zammit: A star is born. Many passionate followers of the sport will, of course, have known about the flying Gloucester wing for some time but on Saturday the global game got their first real good look at the Welshman. He did not disappoint with two scores in his country’s 25-24 victory over Scotland at Murrayfield. His first crossing showed a real cool head while the second displayed all of his quality as he chipped ahead and put on the afterburners to regather for the try. A bright future in international rugby lies ahead for Rees-Zammit.

Roses are red
My worktops are granite
Enjoy this filth
From Louis Rees-Zammit
pic.twitter.com/zHsUFp4xWS

France: Fabien Galthie’s men go into the Six Nations break top of the pile after ending their drought in Dublin by claiming a 15-13 victory over Ireland on Sunday. As mentioned in our five takeaways piece, losing Bernard Le Roux to a yellow card might have led to older Les Bleus sides throwing in the towel, but not this lot. France look the real deal at the moment and with Antoine Dupont and Matthieu Jalibert pulling the strings at half-back, they have two outstanding talents. Judging from the footage from their dressing room after the win, spirits are high.

🇫🇷 When you go into the #GuinnessSixNations break atop the table! pic.twitter.com/VExHKZrthJ

Jonny May: Is it a bird? Is it a plane? Sure, those questions sound corny but that could be what some England fans were asking themselves after the England flyer – pardon the pun – went over for his team’s third try in spectacular fashion against Italy at Twickenham on Saturday. May’s eye-catching finishing ability was a talking point on social media and it proved to be a momentous five-pointer as it meant he crossed the whitewash for the 32nd time. He is now in second spot on England’s try-scoring charts behind Rory Underwood, who holds the record with 49. The score was also important in the context of the game as the match was evenly poised at that stage and gave England a 20-8 lead.

Ardie Savea: These are exciting times for the All Blacks’ back-row after he was appointed as the Hurricanes’ captain for the upcoming Super Rugby Aotearoa season. Savea takes over the leadership role from TJ Perenara and Dane Coles, who served as the Wellington-based outfit’s co-captains in 2020. With Perenara missing Super Rugby this year to ply his trade with NTT DoCoMo Red Hurricanes in Japan’s Top League and Coles often sidelined through injury – especially concussions – in recent seasons, Savea’s appointment is a sensible one as he is arguably the Hurricanes’ best player and one thing is certain; he will definitely lead by example. We wish him well in his new position.

Ardie Savea will be the 2021 Hurricanes captain.

Marcus Smith deal: The fly-half is one of the Premiership’s brightest talents and pledged his future to his hometown club, Harlequins, by signing new a long-term contract to stay at the Twickenham Stoop-based outfit. Smith has been at the forefront of a Quins revival, following the departure of their head of rugby Paul Gustard last month, and it’s no surprise that Harlequins’ management have moved swiftly to secure the services of the highly rated 21-year-old, who was set to be out of contract in June. Since Gustard’s exit, Quins have won three successive matches, against Wasps, Bath and Leicester Tigers, and Smith led from the front with commanding displays on each occasion. Some talent.

Delighted to extend my time at my boyhood club! I’ve loved every minute and am grateful of my journey so far. I am excited to see what the next chapter holds for this group and hope we can bring joy back to the Stoop in the near future! Thanks for all the support 🙏🏽🃏 pic.twitter.com/eBfmdwv48K

Scrapping relegation from the Premiership: This is a tough one. Not having relegation is sure to take away the competitive edge of games in England’s top flight and could diminish the importance of the season. However, on the flipside, we also understand why the move was made. In explaining the decision, the RFU cited “the impact Covid-19 has had on all areas of the game” and it would be harsh to relegate clubs considering the current financial state at the top level – due to empty stadiums and having some games cancelled because of the virus.

Jack Willis injury blow: The 24-year-old England back-row came on as a replacement on the hour-mark in Saturday’s Six Nations game against Italy at Twickenham and made an immediate impact, as shortly after his introduction he crossed the whitewash from close range. That converted try gave the home side a comfortable 34-11 lead but things went pear-shaped for the impressive tearaway as five minutes later he was forced off the field on a stretcher after being cleared out at a ruck by a “crocodile roll” challenge from Italy flanker Sebastian Negri, who has since made a public apology for his actions. Willis’ injury is a massive setback for a talented player, who has caught the eye with several impressive displays during his fledgling international career. We wish the flanker a speedy recovery and hope to see him back soon.

A quick message to Jack Willis. So sorry about what happened yesterday. Just Horrible and never nice to see. Myself and all the @Federugby boys are wishing you all the best🙏🏼I hope to see you back on the field again soon. Take care and we all know you will be back stronger💪🏼 Seb pic.twitter.com/wCYisXxllp

Zander Fagerson’s moment to forget: After an impressive start to this year’s Six Nations – courtesy of a win against England in their tournament opener – Scotland were on course to another victory, against Wales at Murrayfield. Although the match was evenly poised, with the home side holding a 17-15 lead at the time, Scotland had the upper hand in most facets of play. That all changed through a moment of madness from Fagerson, who was red carded after an illegal clear-out on Wyn Jones at a ruck. The incident occurred in the 54th minute of the match and with a man down, Scotland were always going to struggle. They eventually lost by a single point and their head coach Gregor Townsend will be wondering what could have been if Fagerson had stayed on the field, with this a bitter pill to swallow after Round One.

Another red card for head contact in a clearout at the breakdown.

Bath duo and Gabriel Oghre: Jonathan Joseph, Elliott Stooke and Oghre all received bans last week after breaking Covid regulations for socialising at the England centre’s house. Under current guidelines in the UK, people from no more than two households can meet up, which means they were duly punished for their indiscretion. That’s irresponsible enough but the story got worse when the Times reported that Stooke crashed his car on the way home from the gathering and was subsequently charged with drink driving. It added to the problems for Bath boss Stuart Hooper, who is under pressure following an awful start to the season, but credit to the players that were available for the game against an in-form Sale Sharks on Friday. They showed tremendous spirit to defeat Sale 27-22 and ease the burden slightly on Hooper.

Elliott Stooke has been charged with drink-driving after crashing his car on the way home from an evening at Jonathan Joseph’s house.

Joseph, Stooke and Gabriel Oghre were banned by the RFU on Wednesday for socialising indoors in breach of Covid-19 ruleshttps://t.co/fzYmLFXxK8

Injuries, injuries and more injuries: We can’t think of a more brutal start to a Six Nations campaign with a number of international players sustaining injuries in the opening round rounds of the competition. Ahead of the matches at the weekend, Ireland, Scotland and Wales were forced to make significant alterations after seeing several individuals go down, either in the game or during the week in training. Then there was the awful injury suffered by Jack Willis on Saturday, where the Wasps flanker looks set for a lengthy spell on the sidelines. Is it simply the nature of the game nowadays, the congested fixture list caused by Covid or mere coincidence? Either way, it’s very concerning.

The guy earned his England spot having worked SO hard after a year out and came back better than ever.

Take the knee confusion: There was plenty of debate, as well as criticism, in Round One when the majority of the Scotland team did not take the knee, in contrast to England. In the other two games, none of the sides decided to make the gesture, which is a symbol in the fight against social and racial inequality. While there is a matter of freedom of choice, we rather get the feeling rugby’s authorities are fudging the issue, effectively saying ‘it’s nothing to do with us’. Whereas football’s taken a coordinated stance, rugby is pallid in its approach. It would almost be better to do nothing at all but, if the sport really wants to raise awareness and back the movement, then it simply must do better.

🗣️ "People don’t really understand that not everyone who is kneeling is directly correlated to the Black Lives Matter organisation."