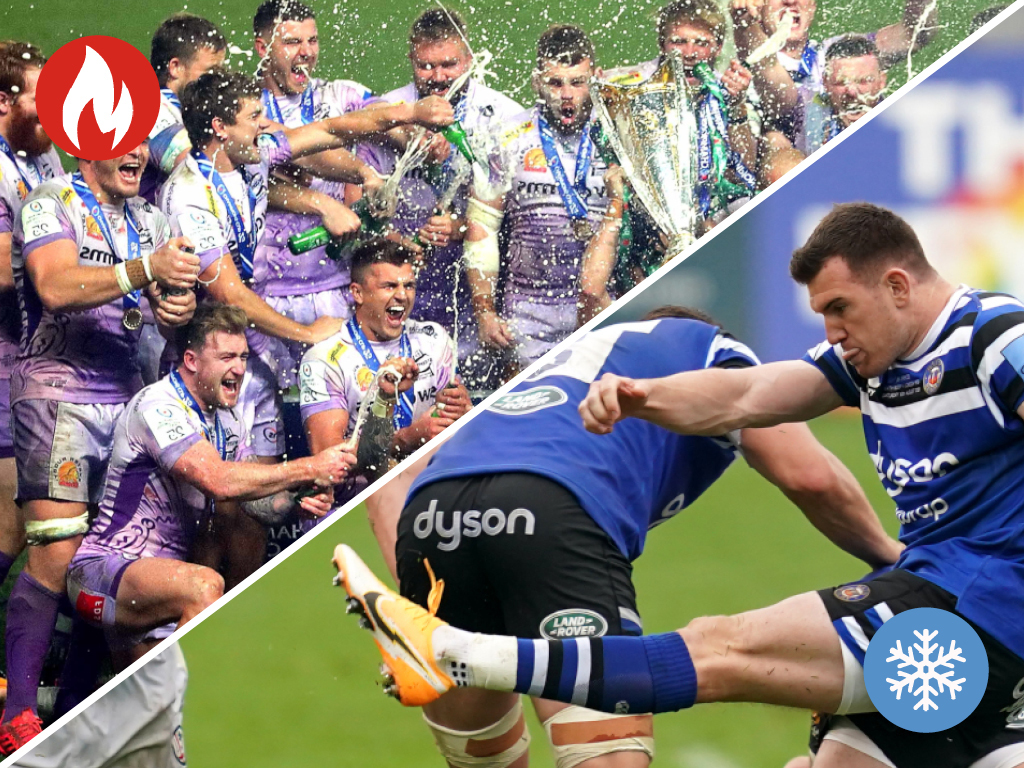 Exeter Chiefs: Under the guidance of director of rugby Rob Baxter, the Devon-based outfit were crowned Champions Cup winners after beating Racing 92, 31-27, in an entertaining final at Ashton Gate on Saturday. Being the kings of Europe is a special achievement and what makes it so remarkable is that Exeter achieved the feat just 10 years after winning promotion to the top-flight of English rugby, which was coincidentally also achieved in Bristol. In the final, Exeter made a terrific start and raced into a 14-0 lead but Racing struck back to narrow the gap to two points. The Chiefs regained the initiative to lead 21-12 at half-time but the Parisian outfit continued to fight throughout the second half and the match was evenly poised with Exeter leading 28-27 inside the final quarter. Despite losing Tomas Francis to a yellow card, 14-man Exeter delivered a superb and disciplined defensive effort during the game’s closing stages and a late Joe Simmonds penalty sealed a memorable and hard-fought win. Their next goal is to win the Premiership final on Saturday and, if they manage to do that, it will be the icing on the cake of a truly exceptional season.

🏆 What a journey Rob Baxter's Exeter Chiefs have been on! pic.twitter.com/1g9WSvOWB5

Bristol Bears: Two years after they gained promotion back into the Premiership, the West Country outfit have won their biggest ever title by lifting the Challenge Cup. They were excellent on Friday, showing no fear in overcoming the three-time Champions Cup victors Toulon 32-19 at the Stade Maurice-David. They played their usual free-flowing rugby, which was summed up by their opening minute score from Harry Randall as they chanced their arm from deep. The scrum-half touched down after just 15 seconds, the fastest try in European rugby, and they continued to run the ball. Although Toulon took advantage of Bristol errors to move 16-10 ahead at the break, the Bears’ persistence paid off as they dominated the second period to secure a thoroughly deserved triumph.

How important was their start in claiming the #ChallengeCupRugby trophy? pic.twitter.com/TAGF6xT5jc

Finn Russell and Nemani Nadolo international call-ups: The reason we watch sport is to see the best show their quality at the highest level, so it was wonderful to see Russell and Nadolo receive call-ups. Russell, of course, was omitted from the Scotland squad back in January, missing four Six Nations matches, but the fly-half and head coach Gregor Townsend have evidently put their differences aside, to the benefit of the team and the fans watching. Fiji have also been boosted, with the Leicester Tigers wing coming out of international retirement to represent the Pacific Islanders, and we look forward to seeing both in the upcoming Tests.

Jack Willis award: After several outstanding performances and playing a big part in Wasps’ drive to the Premiership final, it was good to see Willis being rewarded with the Rugby Players Association’s Players’ Player of the Year award. The 23-year-old is the prototype of the modern day back-rower with his breakdown work particularly outstanding, while he has also caught the eye with impressive defence and shone as a ball carrier as well. Although Wasps will start next weekend’s Premiership final as underdogs against Exeter, if Willis continues where he left off in the semi-final win over Bristol, don’t be surprised if Lee Blackett’s troops upset the apple cart.

Caleb Clarke: After making his Test debut as a second half replacement in the drawn Bledisloe Cup encounter in Wellington, Clarke was elevated to the All Blacks’ starting line-up when George Bridge injured himself in the build-up to Saturday’s game against the Wallabies at Eden Park. The 21-year-old Blues wing made full use of his opportunity as he hit the ground running in front of his home crowd and delivered a superb all-round display before being replaced in the game’s final quarter. His explosive power, raw speed and outstanding physicality proved a handful for the opposition defenders and he will be aiming to build on this performance when the sides meet again in Sydney on October 31.

The performance of Finn Russell: The Scottish maverick is a joy to watch but it is fair to say that his display in the Champions Cup showpiece event has divided opinion. Russell produced a number of scintillating moments, which helped his side regularly cut a usually sturdy Exeter defence apart, but it was interspersed with unforgivable errors that arguably cost them the game. In particular, the pass just outside his 22 that led to Henry Slade’s score was a dreadful option and was a huge blow to their chances, with the Frenchmen getting back into the match moments earlier thanks to Simon Zebo’s try. Russell must surely go on the Lions tour next year and is a contender to start at fly-half, but Warren Gatland will not like those brain fades.

Finn Russell playing Exeter on his own, what a player 👏👏👏

Racing’s frantic start: Whether it was the occasion or some other factor, the French outfit will no doubt rue their efforts in the opening quarter of the Champions Cup final. Their composure went awry, with scrum-half Teddy Iribaren a particular culprit, as Exeter dominated the early stages. The Englishmen touched down twice thanks to Racing’s inability to keep hold of the ball and control field position, which meant the Parisians had it all to do. They did well to come back into the contest and were by far the most dangerous team with ball in hand in the final hour, but that start was shambolic and a key part of why they lost.

South Africa withdrawing from Rugby Championship: The decision from SA Rugby to withdraw the Springboks from this year’s Rugby Championship was not universally popular and the tournament is sure to lose a lot of its prestige without the defending champions and current world champions participating in it. While director of rugby Rassie Erasmus has cited the ongoing complications related to the Covid-19 pandemic and concerns about player welfare, the timing of the announcement – two weeks ahead of the tournament’s start – leaves a lot to be desired. Sure, most of South Africa’s players would have less preparation than their counterparts in Australia and New Zealand but they also have the option of selecting overseas-based players, of whom several have been in action in European club competitions. Also, remember that Argentina’s players are in an even worse position than South Africa’s as most of them have not been playing for months now – whereas South Africa’s domestic players have been in action for the past few weeks – yet the Pumas are already in Australia and set to take part in the tournament.

🗣️ "The impact on our planning was profound and took us to a bottom line that we could not in fairness commit to being able to compete."

Ben Spencer omission: The whole of England was utterly staggered when Eddie Jones decided to leave the Premiership’s form scrum-half out of his training squad. Of course, it doesn’t mean that Spencer will not be involved during the Six Nations and Autumn Nations Cup, but this decision does rather indicate that the Australian has made his mind up. It is a bemusing call, with the Bath man producing a series of stunning performances since the restart. The former Saracens player has it all, from a supreme kicking game to a vast array of skills in attack.

Ben Youngs, Alex Mitchell and Willi Heinz are all preferred at scrum-half to Ben Spencer. Easy to see why Eddie Jones has lost more World Cup finals than any other coach

Graham Henry’s comments on the All Blacks’ coaching situation: Many supporters would agree with the former New Zealand head honcho that the governing body ‘cocked up’ in not appointing Dave Rennie as their new supremo, but those comments were odd given that Henry was directly involved in the process as a selector. Foster was not a popular appointment, with the Crusaders’ Scott Robertson the preferred choice for the fans. The likes of Japan boss Jamie Joseph, who rejected the offer to contest the position, and Rennie didn’t even apply, but the 2011 World Cup-winner must have had a significant say on who the NZR appointed to the role? He surely backed the decision to promote Foster, but now Henry has rather undermined the ex-Chiefs coach.

'New Zealand Rugby c**ked that up': Sir Graham Henry says Wallabies coach Dave Rennie should be All Blacks coach ahead of #BledisloeCup

Extraordinary comments, particularly given Henry was on panel to select Ian Foster as All Blacks coachhttps://t.co/PGbBHgxjxQ

George Bridge injury: One of New Zealand’s best will miss the next six months after suffering a serious pectoral injury. After breaking into the All Blacks last year, Bridge has become a key part of the team and continued his fine form in Super Rugby Aotearoa. He also started against the Wallabies in the opening Bledisloe Cup contest but will now miss the rest of the season and the start of next year. It is cruel on the wing and disappointing for the national team, who will be shorn of an excellent player, despite Ian Foster having a plethora of options at his disposal.

UPDATE: All Blacks winger George Bridge will be out of rugby for up to six months after suffering a chest injury in field training yesterday. He’ll be assessed over the next 48 hours to determine the next course of action. pic.twitter.com/4RGQnjvaxA