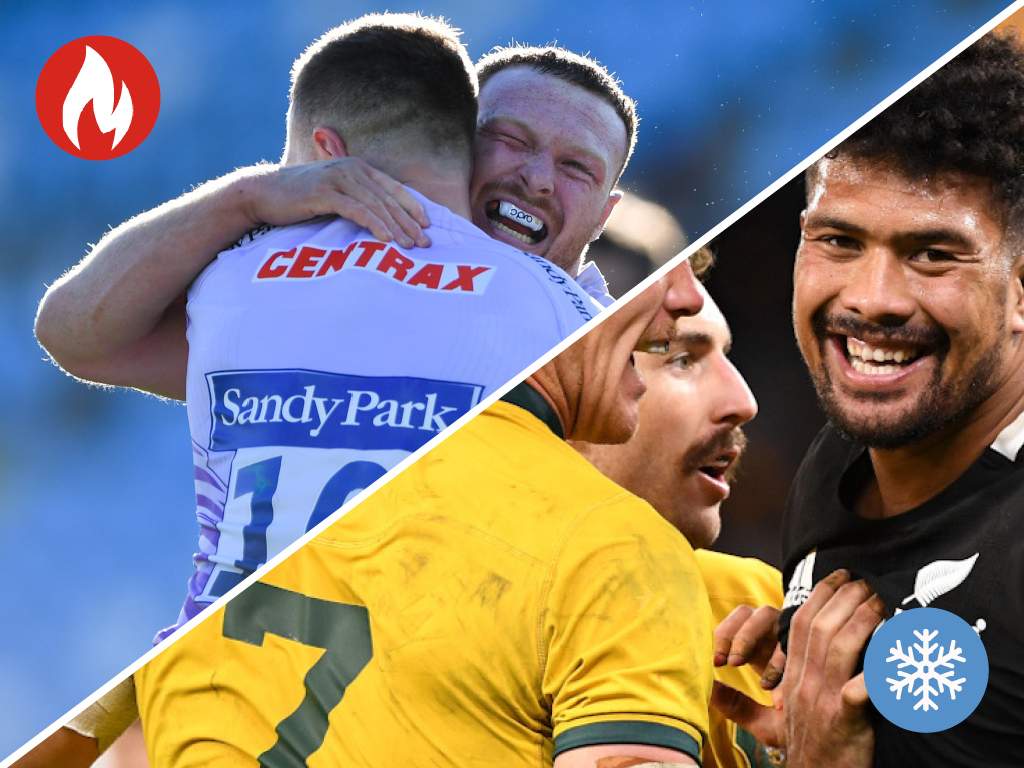 Champions Cup semi-finalists: Although Racing 92 and Exeter Chiefs walked off with the spoils and will contest this year’s final at Ashton Gate, Saracens and Toulouse were worthy opponents and gave a good account of themselves. Sarries will be hurting as they came agonisingly close to reaching the final for the second successive year but, on the balance of play, Racing deserved their win which came courtesy of an outstanding Juan Imhoff try. In the other semi-final, Toulouse came out firing and dominated the early stages but Exeter Chiefs kept their composure and soaked up the pressure before taking control of proceedings to book their place in the final. That sets up a mouth-watering final and the tournament is set to have new winners. Good luck to both the finalists.

Who are you tipping to lift the trophy? 🏆 pic.twitter.com/zW1nHMczDi

Bristol Bears: Congratulations to the English outfit who secured their first ever European final following a hard-fought 37-20 triumph over Bordeaux-Begles on Friday. It was arguably the match of the weekend as both teams went toe-to-toe in a high-octane encounter. Bordeaux began the brighter, going 13-0 ahead, but the pace that Bristol played at eventually wore the French outfit down. The game would finish 20-20 after 80 minutes but UBB struggled in extra time. Tiredness had set in but they were also forced to play with 14 men – suffering an injury after using all eight players on their bench. As a result, the Bears profited and scored 17 unanswered points to complete a momentous victory for the West Country outfit. Their season continues to get better and better.

A truly stunning advert for #ChallengeCupRugby 🙌

Pat Lam's men prevailed after @OConorPiers struck a fatal blow to finish off the French side 🏉 pic.twitter.com/EcRaS3UTY8

Superb Bath comeback: It was an unbelievable fightback from Bath against Gloucester last Tuesday. Down 3-20 on 60 minutes, they somehow recovered to pick up a bonus-point 31-20 victory at the Recreation Ground which has boosted their hopes of making the Premiership play-offs. The team’s form since the restart has been impressive to say the least so it was a shock when they were trailing by such a margin against the Cherry and Whites. But they did not lose hope and backed themselves to come good when it mattered. Boy did they do that as four late tries saw them seal victory and puts them in second place having played one match more.

Nigel Owens and Joy Neville: Owens will become the first referee to take charge of 100 Tests after being appointed to oversee France’s Autumn Nations Cup clash with Italy on November 28. It will be the 49-year-old Welshman’s second game of the newly-created tournament that replaces the traditional November tours and, as World Rugby chairman Sir Bill Beaumont said, it is “a remarkable achievement”. Ireland’s Neville will also make history by becoming the first female to perform Television Match Official duties when Wales clash with Georgia and Scotland face Fiji, which is another landmark moment for the game. Congrats to both.

Congratulations to @Nigelrefowens & Joy Neville, who are set to make officiating history in the upcoming tests https://t.co/B03qXS7GUg #rugby via @worldrugby

Rob Howley returns to rugby: After leaving Wales’ senior squad in disgrace on the eve of last year’s Rugby World Cup in Japan and serving a suspended sentence for breaching betting rules, things have taken a turn for the better for Howley after it was announced earlier in the week that he will be joining Canada’s backroom staff as an assistant to head coach Kingsley Jones. Howley’s experience and knowledge of the game is sure to add value as the Canadians bid to qualify for the 2023 World Cup in France and his expertise will also be utilised as a consultant to Toronto Arrows during their 2021 Major League Rugby campaign.

🗣️ "His experience and expertise will benefit not only our young players but our entire coaching staff."

Alex Corbisiero news: Former England and British & Irish Lions loosehead prop Alex Corbisiero revealed this week that he is battling cancer once again. The 32-year-old was diagnosed with testicular cancer last November and appeared to be recovering but posts on his social media pages have confirmed he faces another battle. “When I opened up about my cancer experience in March, I was very hopeful it was behind me,” he said. “Unfortunately, the doctors discovered it has spread to some of my lymph nodes. I am currently on week five of nine of chemotherapy under the amazing care of the staff at Guy’s hospital in London. I’m mentally and physically in a good place and staying positive throughout this rollercoaster of ups and downs. I am surrounded by my fiancee, family and friends, and very grateful for all the love and support.” We wish him nothing but the best and back Alex to take the challenge head on, like he did on the rugby field.

For those who didn’t see my latest update on my battle with Cancer I posted on Instagram, here it is. I’m overwhelmed by all the positivity and support I’ve received, thank you for the love. 🙏🏻❤️ @AbbyGustaitis @TeamCorbs pic.twitter.com/ZQCC1yL0N5

Qantas ending Australia sponsorship: They’ve been a staple of Australian rugby for 30 years but the airline has ended their sponsorship of the Wallabies. No doubt the decision has been forced by the Covid-19 pandemic but it is another setback for the financially-stricken governing body. It adds to a long list of problems for Rugby Australia, who endured an ugly legal battle with Israel Folau, before CEO Raelene Castle departed after frustrations mounted over her leadership. Qantas’ decision is perhaps not surprising, given the current climate, but it is another huge blow for Australian rugby, who are now without a major sponsor.

Qantas set to end 30-year Wallabies partnership. Will continue until end of the year but Rugby Australia now without a major sponsor. https://t.co/qwje85m1aI

Rugby Championship schedule farce: The times and dates for the upcoming southern hemisphere competition were announced but it didn’t please everyone, and you can understand why. New Zealand are unhappy that their final game takes place on December 12, meaning that they will have to be in quarantine for Christmas. New Zealand Rugby had specifically asked for their last match to be played a week earlier, but SANZAAR stated that they had no other options. There seems to have been a breakdown in communications somewhere, with the two governing bodies now at loggerheads in the open, which isn’t a good look and surely could have been avoided.

STATEMENT | @NZRugby has expressed its disappointment at the announcement of The Investec Rugby Championship schedule which has the All Blacks playing their last match in Australia on Saturday 12 December, a change from original planning.

Sale’s social media mishap: The week started in positive fashion as the club ended a 14-year drought without silverware after beating Harlequins to the Premiership Rugby Cup title. However, not for the first time, Sale’s social media team have let themselves down as on Friday they tagged Quins full-back Mike Brown in a video which basically mocked the player, who did not take kindly to the post. Some may argue it is light-hearted fun, but it clearly lacked taste – and included a typo – and many have since criticised the tweet which was followed up by a fishing emoji. Whoever is running the Sale account needs to grow up.

Nice humility 👍🏼
Well done to your players for the win, well deserved. Luckily you’re not a representation of how they are.

The sad death of Matt Ratana: Truly awful news broke from Croydon on Friday that Sgt Ratana had been killed by a handcuffed suspect, who then turned the gun on himself while in custody. The 54-year-old Ratana was highly respected on and off the field at East Grinstead Rugby Club, where he was head coach, with the club holding two separate minute’s silences on Sunday to pay their respects. Their Vice Chairman Matt Marriot told BBC News they had to arrange two events because the “interest has been pretty enormous”, with “people coming from all over the country”. He said Ratana “wasn’t just our coach… he was a role model, a mentor and often a father figure”. UK Prime Minister Boris Johnson and New Zealand Prime Minister Jacinda Ardern also offered words of comfort and we’d like to add our condolences to his family and friends.

Covering #SgtMattRatana today. He’d have been day shift with us. I was gonna repay him for breakfast he got me last week… after he tackled me in the suite and said “Come on XL, bring it in, you need a custody cuddle!” ☺️ pic.twitter.com/JoFJD2igh5