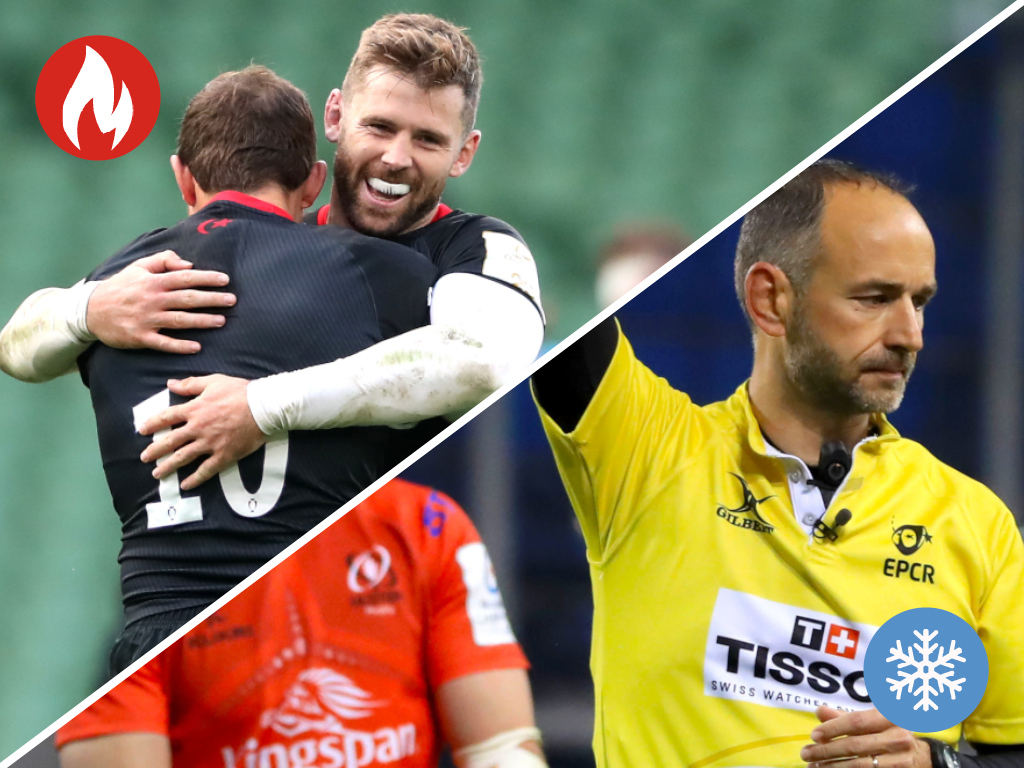 Saracens: So who thought Leinster would have their incredible winning run ended by a Saracens side missing a handful of departed players and the suspended Owen Farrell? Not many, we would guess, but one has to take their hat off to Mark McCall’s men. They were outstanding in Dublin on Saturday as their whole team stood up defensively while Vincent Koch, Maro Itoje, Alex Goode and company put in wonderful performances in a 25-17 win. Brad Barritt said afterwards that the prospect of another week together as a squad was the biggest motivation, which says so much about the team in black. For the large majority of the game they made Leinster look ordinary, which takes some doing.

World stars light up Europe: We ultimately watch this great sport to see the top talents produce moments of magic on the field and in Semi Radradra and Cheslin Kolbe, there are two of the great entertainers. Both were at their best as their respective teams reached the semi-finals in Europe. Radradra was stunning in Bristol Bears’ victory over the Dragons, playing a significant part in two tries before scoring one himself, while Kolbe touched down twice for Toulouse against Ulster. The South African, with his lightning quick feet, embarrassed Jacob Stockdale for those scores and then displayed his deceptive power to sit the giant Stuart McCloskey down. Wonderful stuff from this duo.

Return of South African rugby: Competitive rugby returns in the land of the world champions after a six-month absence and after such a long lay-off there is plenty of excitement in the republic. The action resumes on September 26 with a double-header at Loftus Versfeld in Pretoria, when the Bulls take on the Sharks, and the Lions do battle with the Stormers in what is billed as Super Fan Saturday. The focus then shifts to Newlands in Cape Town where the Springbok Showdown will take place on October 3. That should be a unique experience in which Springbok assistant coaches Mzwandile Stick and Deon Davids will coach Springbok Green versus Gold teams for the fixture with the selection process taking the form of a draft pick from an enlarged squad of 60 players. There are also plans for a domestic competition which begins on the weekend of October 10 and the tournament is set to continue over the Christmas and New Year period until January 23’s final.

Bledisloe Cup ties to go ahead: There was genuine concern that the highly anticipated Bledisloe Cup Tests wouldn’t take place – due to New Zealand’s hard-line quarantine regulations – but after a stand-off, common ground was reached and the Tests between the nations will go ahead in New Zealand, with matches scheduled to take place in Wellington on October 11 and then in Auckland on October 18. It took New Zealand Prime Minister Jacinda Ardern calling her Australian counterpart Scott Morrison to help resolve the stalemate. Under new, relaxed quarantine protocols, the Wallabies will train fully four days after arriving in the country, dependent on all members returning a negative Covid-19 test on day three, so hopefully everything goes according to plan as most rugby lovers would love to see these two clash.

Rugby Australia has today expressed its gratitude to New Zealand Rugby and the New Zealand Government following confirmation of the two Bledisloe Cup fixtures to be played in New Zealand next month.https://t.co/jF7svsEix1

Brumbies: Dan McKellar’s men cemented their status as Australia’s premier rugby side as they were crowned Super Rugby AU champions courtesy of a 28-23 triumph over the Reds in the final in Canberra on Saturday. Although the scoreline suggests a tightly-fought contest, the Brumbies were deserved winners as they dominated proceedings for most of the match and eventually outscored the men from Brisbane by three tries to two. Although the entire Brumbies team deserves credit, young fly-half Noah Lolesio earns a special mention as he made his return to action, after missing their six previous matches through injury, and finished with a 13-point haul courtesy of two penalties, as many conversions and a well-taken drop goal. The 20-year-old also impressed as a playmaker and walked off with the player-of-the-match award.

The @BrumbiesRugby sing their song 🎶 💪 🏆

Toulon’s pitch: It is September, the Top 14 season has only just started and they have had a six month break, so why is the pitch at the Stade Felix Mayol so poor? There is no excuse for it and, as a result, makes the club look rather amateurish. Pitch problems seem to be a constant in the French league but all the teams have had plenty of time to get it right ahead of the new campaign. However, in Toulon at least, it looks worse than ever and contributed to what was an awful game on Saturday. They edged past the Scarlets 11-6 to reach the quarter-finals, but both teams, as well as the spectacle, suffered because of the turf they were playing on.

Irish provinces: A week ago, Leinster and Ulster were facing each other in the PRO14 final, but a few days later they were both eliminated in Europe. The latter’s was not necessarily unexpected, given the brilliance of Toulouse over the past couple of years, but the manner of it was disappointing. It followed a poor display from the Dubliners on Saturday who, according to their head coach, were spooked by Saracens in the first half. Although Leinster improved after the break, they deservedly succumbed to the defending champions, ending their winning streak in 2020/21. It all looked so promising during the group stages but this season’s European excursion has ended in frustration for the Irish sides.

A bad weekend for the PRO14 contingent in Europe. Quarter-final defeats for all five teams – Dragons, Edinburgh, Leinster, Scarlets and Ulster. England and France now monopolise the semi-finals.

Challenge Cup cancellation: Sunday’s quarter-final between Leicester Tigers and Castres was a casualty of the Covid-19 pandemic after EPCR decided to cancel the match, due to the French side having three squad members and one staff member test positive with coronavirus. The decision, made following a meeting of a Medical Committee comprising medical leads from the unions, league bodies and both clubs, and subsequent independent medical advice, meant the Tigers progressed to the semi-finals, which is disappointing for Castres and surely not the way Leicester would have wanted to move into the last four. Let’s hope there’s no more cancellations as the tournaments conclude.

Our @ERChallengeCup quarter-final against @CastresRugby at Welford Road on Sunday has been cancelled by EPCR.

We will progress to the semi-finals next weekend.https://t.co/MDm2DkrjSq

An uncomfortable 80 minutes: The Clermont v Racing 92 fixture on Saturday was dominated by concern for referee Romain Poite, who was coughing persistently during the game. Mic’d up like many referees these days, Poite’s struggles were clear for television viewers to hear and while BT Sport insisted he’d been tested earlier in the week, which came back negative, surely common sense was needed at the interval and he should have been replaced? What added to the concern was that Poite never covered his mouth and rarely kept his distance from the players. With the above news about the Tigers v Castres game, there was heightened concern from fans as social media went into overdrive.

Think ref Romain Poite should stay in the changing rooms at halftime and self isolate. He has a frequent cough and his forehead has a fair bit of sweat on it! Either way, it’s not a good image for the game. Safety and precaution should come first.

Injuries to Springbok duo: As if South Africa are not under enough pressure already – with their domestic competition set to kick off much later than that of their rivals from New Zealand and Australia – they suffered a double setback with the news that they’ll be without Rugby World Cup-winning duo Handre Pollard and Lood de Jager for the upcoming Rugby Championship in Australia. Star fly-half Pollard suffered an ACL injury while on duty for Montpellier in a Top 14 encounter with Racing 92 and is poised for a lengthy spell on the sidelines. Meanwhile, second-row De Jager was forced off in Sale Sharks’ Premiership game against Leicester Tigers after a recurrence of a shoulder injury which he initially sustained in last year’s Rugby World Cup final and has been subsequently ruled out for a period of up to six months.

🗣️ "He’s going to have surgery and it will probably be longer. It is probably going to be a rebuild so will be five to six months."