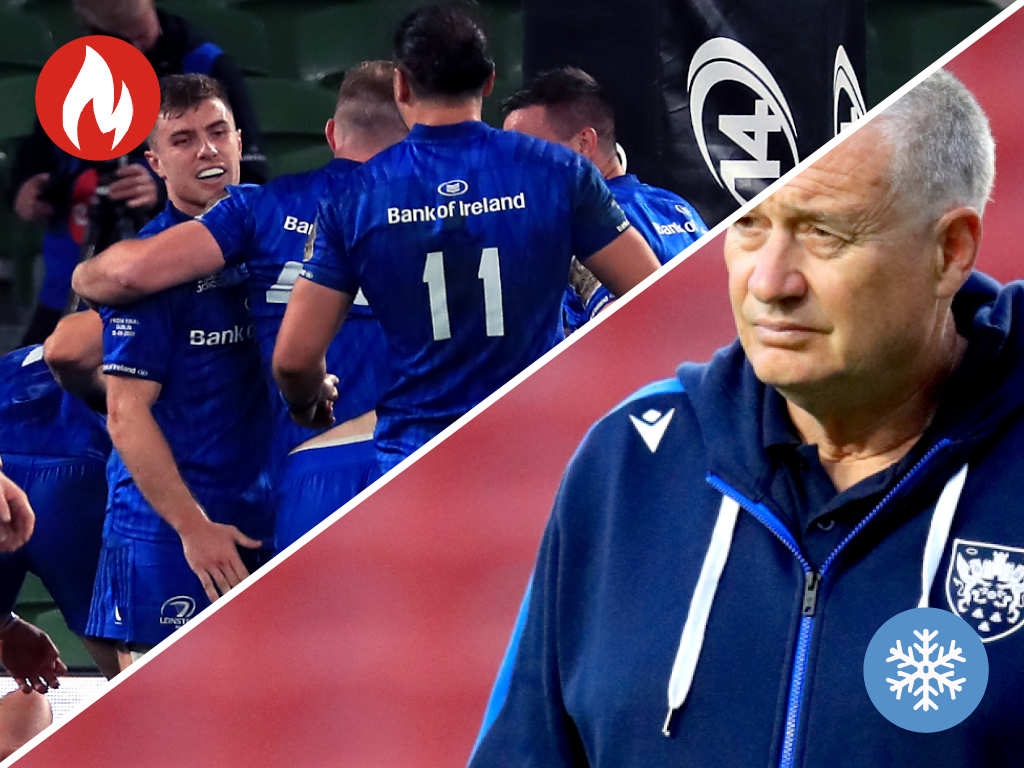 Leinster: What more can be said about this team? A third successive PRO14 title was wrapped up in style on Saturday as they secured a 27-5 victory over Ulster in the final. That triumph made it 17 wins on the bounce this season as they were a cut above the rest from Round One until the Dublin showpiece. This has been a complete squad effort though with 53 players used in an incredible campaign. Leo Cullen and his coaching team right down to the academy deserve serious credit for how they have been able to keep performance levels so high throughout the season. The next carrot for them is the Champions Cup.

👏 It truly was a squad effort though as the team's form NEVER dipped. pic.twitter.com/53i5J26Nn6

Bath pack: To go to Sale’s own patch and turn them over in the manner they did was hugely impressive from Stuart Hooper’s team. The Sharks’ recent form has been built on a physical edge that has bullied the opposition, but Bath were having none of that on Sunday as they fronted up at the AJ Bell Stadium and in fact won the scrum, maul, lineout and gainline battle. Their pack was the catalyst of this win and they can take massive confidence in how they mixed power with a good dose of intelligent rugby that saw the likes of Ben Spencer, Rhys Priestland, Jonathan Joseph and Ruaridh McConnochie stand out as Bath jump up to third.

Autumn Nations Cup: Mark your diaries for this after it was confirmed last week that we will see international action, in a tournament format no less, in the northern hemisphere’s autumn. England have been drawn in Group A alongside Ireland, Wales and Georgia, while Group B is made up of France, Scotland, Italy and Fiji. With the end-of-year tours being abandoned because of the coronavirus pandemic, this should be the perfect tonic for the national sides involved and we can’t wait to see things play out in November and December. It’s also great to see Georgia and Fiji involved and hopefully that’s the start of things to come.

Correct verdict in Owen Farrell case: Unsurprisingly, given that it perhaps involves a divisive figure, there has been much consternation over the ban given to Farrell but, for us, the panel absolutely reached the correct verdict. The maximum suspension that can be handed out to an incident like Farrell’s is 10 weeks but, when you add in mitigation and remorse, it was correctly halved to five. Admittedly, the ‘charity work’ section was odd to say the least but, when you don’t have a blotted copybook – the only ban the fly-half has ever received was two weeks in 2016 – and you add in his guilty plea, the outcome mirrored the majority of previous cases. People bring up the Andre Esterhuizen tackle, but that wasn’t suspension-worthy, and neither was the incident involving Izack Rodda.

Just seen the @owen_faz tackle, yes bad one,he didn’t miss👀 but it happens so don’t hang him out to dry. He’ll take the punishment and learn from it. That edge he has in him is what makes him special. He knows he has to control it. #tinhaton

Reds: Congratulations to Brad Thorn’s men who have reached the Super Rugby AU final where they will take on the Brumbies in Canberra. The Queenslanders were ultimately too good for the Rebels on Saturday as they scored three tries in a 25-13 victory at Suncorp Stadium. The visitors weren’t helped by injuries to key Wallaby duo Dane Haylett-Petty and Matt Toomua, but the home side had the edge throughout and deservedly came away with the triumph. Having also beaten Dan McKellar’s charges in the final game of the regular season, the Reds will no doubt go into this weekend’s contest with confidence in what will be an intriguing showdown.

Super Rugby AU is down to the final two after the Queensland @Reds_Rugby booked a date with the @BrumbiesRugby in next weekend’s decider, thanks to victory over the @MelbourneRebels.#SuperRugby #SuperRugbyAU #REDvREB pic.twitter.com/8bnFKjmcXb

Northampton’s awful week: Losses on Tuesday and Sunday to Bristol Bears and Leicester Tigers respectively means it’s now six defeats in seven matches since the restart for the Saints. This is incredibly concerning, not least because they face the mighty Exeter Chiefs in their Champions Cup quarter-final this weekend. That result could get ugly at Sandy Park as these two sides are chalk and cheese in terms of form, with Saints boss Chris Boyd’s comments after their latest loss adding to fans’ concerns. He said: “Until our confidence comes back we have may need to modify the way we play and consider a different selection.” Not good at all.

Braydon Ennor injury: What a sad loss to rugby for the next nine months as the sport will be without this talented centre. The 23-year-old suffered a ruptured anterior cruciate ligament during the North v South contest a fortnight ago, which rules Ennor out for up to nine months, ending his hopes of adding to his one cap for the All Blacks, for the time being at least. Ennor’s absence should leave Rieko Ioane with a real chance of pressing his case for the 13 jersey but New Zealand head coach Ian Foster does also have the option of picking Anton Lienert-Brown. We wish Ennor the best in his recovery and back him to return stronger.

What a shame, classy outside centre and would have been great seeing him push on with the All Blacks.

Still only 23 with a big future ahead.

Isi Naisarani: The major shock in Australia head coach Dave Rennie’s first squad was the absence of the powerful Rebels number eight. Naisarani has been left out of the 44-man group in what’s a big surprise as he enjoyed a superb 2019 and featured in eight Tests during that year, cementing himself in the first XV ahead of the Rugby World Cup. However, his form has clearly dipped in the eyes on Rennie as Harry Wilson is one player preferred in what is still a strong group from the new Wallabies chief.

Pretty hard to see how Isi Naisarani doesn't fit into the top 44 players in Australia. One of the Wallabies best and most consistent since qualifying to play Australia…if he had been way off this year I would say ok, but he has been good since returning from injury?

Bristol’s frivolous appeal: When Pat Lam speaks, you listen, as more often than not he is considered and fair with his words, but we believe he’s got it wrong on this occasion. In Round 18, Bristol’s Siale Piutau got involved in a brawl with Worcester’s Andrew Kitchener, which resulted in both receiving three-match bans. In what’s rare for modern day rugby, punches were thrown but Lam believed that his player was treated unfairly, claiming Piutau was acting in self-defence, and it led to them challenging the decision. However, we vehemently disagree and felt the appeal was rather laughable. The centre was ultimately the instigator when, after tackling Ted Hill, he rather goaded the back-rower, who reacted and that was when Kitchener joined the fray. Although it’s obviously not uncommon for verbals to be exchanged, Bristol were 36-13 up late on and Piutau’s actions, which saw Hill and his team-mate taking exception, were unnecessary.

"Siale Piutau was the instigator of the incident. He's a strong, experienced player, he seizes the initiative and grabs Andrew Kitchener."

"The punishment for both players is appropriate. You can't seek to undermine it."

Covid concern in Argentina: Head coach Mario Ledesma and a number of other staff members and players became the latest in the side to test positive for coronavirus, which is concerning and we hope that they make a full recovery. Fortunately, initial signs are good with a statement saying they are “asymptomatic and in good health”, but it continues to be an issue for Los Pumas, who had six players contract the virus in the previous week. As well as the health aspect, which obviously takes precedence, it also hampers their Rugby Championship preparations and continues the negativity which is emanating from South America at the moment. The professional game is in turmoil following the effective dismantling of the Jaguares and this has added to an already long list of problems.