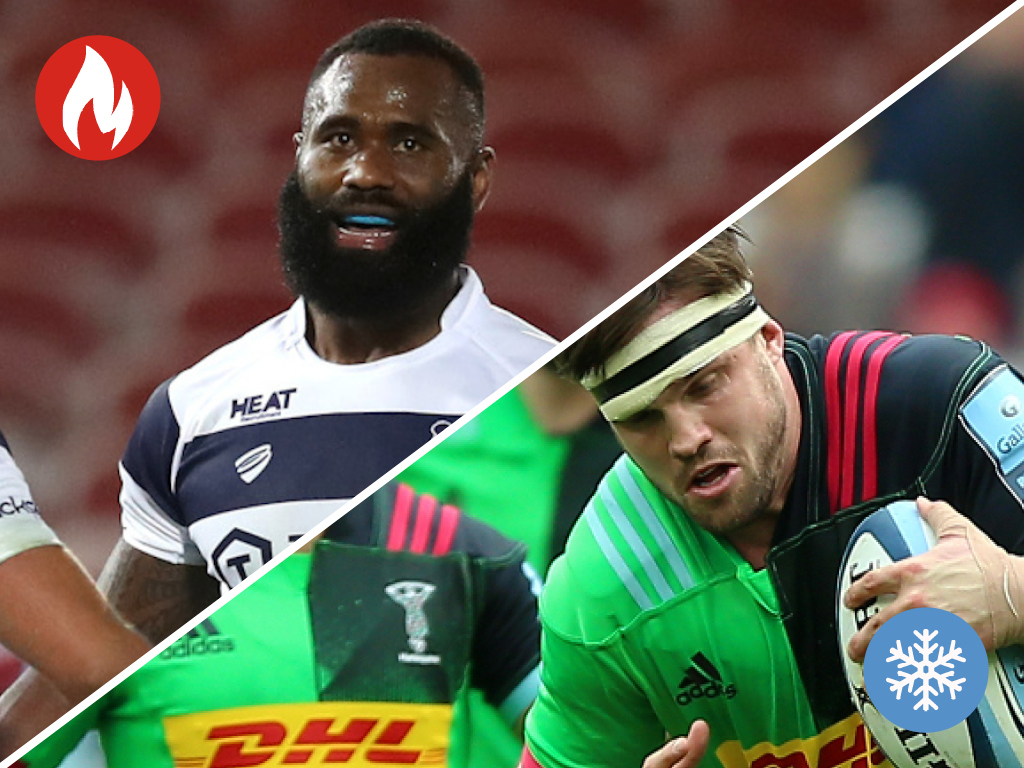 Semi Radradra: The Fijian was quiet in his first game for Bristol but he burst to life as Pat Lam’s team dominated the opening half against their West Country rivals Gloucester on Friday. Radradra was utterly outstanding, helping the Bears go into the interval 26-14 ahead at Kingsholm. The 28-year-old set up Henry Purdy’s try with a stunning run and off-load before the centre went over himself to help them to a crucial victory. The ex-rugby league star is ideally suited to the way Lam’s side play and could be the difference as they attempt to win the league title.

Reds: Brad Thorn’s troops made a statement of intent in Super Rugby AU as they delivered a superb all-round performance in their 57-5 bonus-point triumph against the Western Force on the Gold Coast on Friday. As the scoreline suggests, the Reds dominated most facets of play and although the entire team deserves credit, the half-back paring of Tate McDermott and James O’Connor earns special praise as they called the shots superbly throughout. McDermott was eventually rewarded with a brace of tries and O’Connor contributed 22 points courtesy of a try, seven conversions and a penalty.

Edinburgh: The PRO14 returned to action at the weekend and the Richard Cockerill-coached team hit the ground running as they notched an impressive 30-15 victory over their arch rivals Glasgow Warriors at Murrayfield on Saturday. The Warriors held the upper hand during the opening stanza and were 15-13 up at half-time but the home side took control of proceedings after the interval and scored 17 unanswered points to clinch their spot in the play-offs. They also won the 1872 Cup for the third successive year on a great night for them.

Bath: While their opponents rolled out a second-string side for the game at Welford Road, take nothing away from Stuart Hooper’s team as they were a cut above on Saturday. Led by an impressive pack effort that saw all three starting front-rows cross the whitewash, Bath cruised to victory and sent a message to their remaining opponents this season that they are to be reckoned with. A mention also goes to the back three, with Ruaridh McConnochie in particular in fine form in front of a watching Eddie Jones.

Leinster v Munster: It was a match high in quality and intensity in Dublin, which surprised plenty due to it being the sides’ first game back after such a long break. Lovely touches, running lines, handling and finishing made for an absorbing contest and it would be unfair to single out individual players after what was a real 80 minute slog. What a shame no fans were in the Aviva Stadium to enjoy the spectacle as Leinster made it 14 wins from 14 with a narrow victory.

The #GuinnessPRO14 Conference A leaders weathered a late storm from the men in red to uphold their unbeaten record ➡️ https://t.co/RPBsG3LLXJ

Sale Sharks: For all their star power, Steve Diamond’s side have underperformed in their opening two matches, succumbing to Harlequins and then Exeter Chiefs on Friday. After an improved performance in the first period against the Chiefs, they rather imploded as the Devonians took command in the second. Ill-discipline was again a major issue as the Sharks staggeringly conceded over 20 penalties, something which wasn’t an issue prior to lockdown. With expectations high, you can see that Sale are struggling with the added pressure placed upon them and they will need to improve significantly if they are to avoid defeat versus an in-form Wasps side on Tuesday.

This is a pretty good indication of where Sale are. They can certainly spar well with a side like Exeter; go the full 12 rounds? Not yet.

Jack Clifford blow: What a sad loss to the game as the Harlequins and England international was forced to hang up his boots last week. Dogged by shoulder problems, the impressive back-row retires as the only England player to have a 100% victory record from playing 10 games or more. However, that feat is surely something he’d happily relinquish for an injury free career. Unfortunately the Quins favourite bows out at the age of 27. We wish him well in the future.

Jack Clifford is the only player in England rugby history to have played double figure games and won them all.

London Irish: The game itself at the Stoop was disappointing to say the least but in Northampton’s defence they found some form when it mattered late on to seal victory. For London Irish it was largely miserable throughout, as they could only muster three points via the boot of Paddy Jackson in a forgetful team performance on Saturday. In fact, Irish’s handling and error count rate increased as the contest wore on, with Saints capitalising on some alarmingly sloppy rugby. The Exiles have much to improve on.

This is a shambolic performance from London Irish. Clueless. Can't have seen much worse this season in the Prem

RG Snyman and Joey Carbery setback: Apart from restarting their PRO14 campaign with a narrow 27-25 defeat to Leinster, Johann van Graan’s Munster side were also dealt major injury blows which played its part in that loss. Ahead of the clash with their arch rivals, first-choice fly-half Carbery was ruled out for an indefinite period of time due to an ankle problem and they suffered more misfortune when Springbok lock Snyman was forced off the field after just seven minutes of the derby with what looked like a serious knee injury. Those weren’t the only injury concerns though as Dave Kilcoyne and Jean Kleyn also had to leave the field with knocks and James Cronin was forced to withdraw ahead of the game.

James Cronin (groin) was also ruled out before KO.

All 4 players will be assessed, let's hope the injuries aren't too serious – speedy recovery lads!#LEIvMUN pic.twitter.com/xDuSI0BMJE

Western Force: While we have praised the Reds for how they eased past their opponents, one cannot ignore how the Force went down to their biggest defeat of the Super Rugby AU season. The 57-5 loss was their heaviest by some distance as they could not penetrate what’s become a fearsome Reds defence, resulting in a sixth straight negative for the Perth side. The size of the loss is worrying as the season rolls on and one hopes it doesn’t unravel further at the Brumbies.