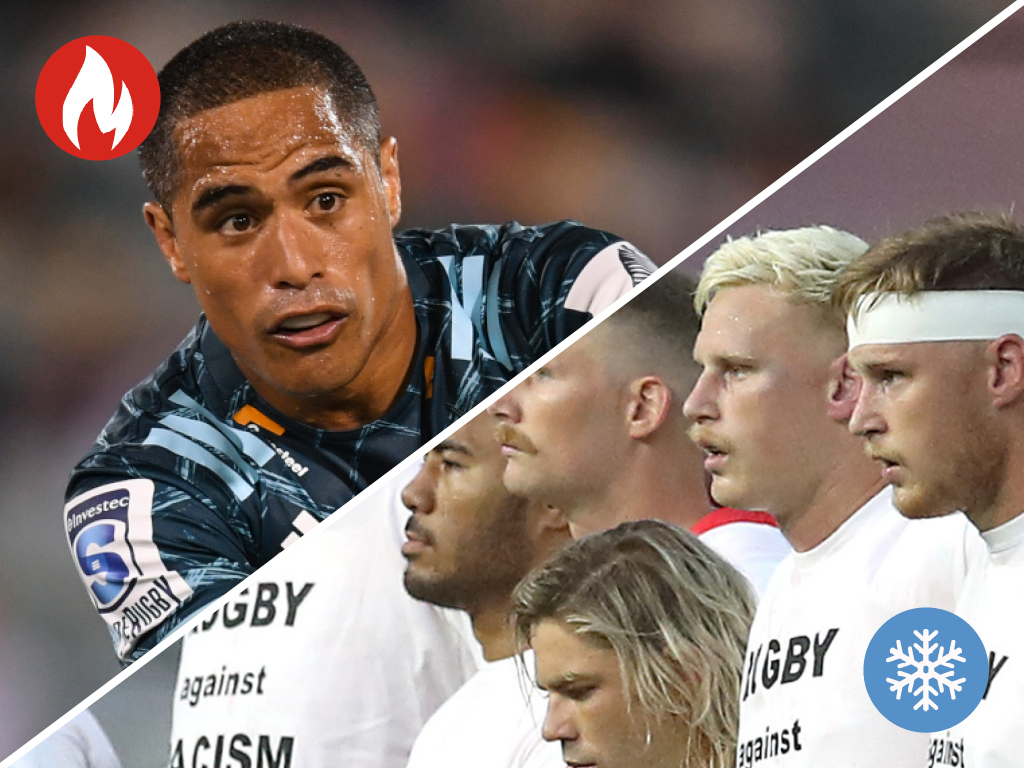 Super Rugby Aotearoa: While it was unfortunate that the mouth-watering finale between the Blues and Crusaders at Eden Park was cancelled on Sunday, nothing can be taken away from what was an outstanding Super Rugby Aotearoa. We’ve said for many years that New Zealand derbies are the highlight of the Super Rugby weekend and it came as no surprise this stand-in competition was a huge success. Throw in packed out crowds and top class rugby – amazing considering the players were not fully match fit – and rugby supporters around the world have been treated to box office action week in week. Let’s please ignore elongated and diluted competitions and go back to the future so to speak and carry on short formats such as this as it keeps fans interested and clearly puts bums on seats at ground.

Thanks for the memories Aotearoa! 🖤🇳🇿

West Country duo: Rust was expected from all the Premiership sides as they restarted the season over the weekend and there was definitely some of that. But praise comes the way of Gloucester and Bath as they enjoyed comfortable wins on Saturday, beating Worcester Warriors and London Irish respectively. While the Cherry and Whites were given a huge helping hand from Worcester’s Melani Nanai’s moment of madness, they looked slick thereafter as fly-half Danny Cipriani and number eight Jake Polledri were singled out for special praise by head coach George Skivington in the post-match. Bath meanwhile cruised past the Exiles as Ben Spencer enjoyed a superb debut at the Recreation Ground. Both teams will be buoyed by their respective showings as they look to push for the play-off spots.

Highlanders: Although the men from Dunedin were also-rans in Super Rugby Aotearoa, they finished their campaign in emphatic fashion when they notched a 38-21 home triumph over the Hurricanes. In a highly entertaining game, a strong second-half performance laid the platform to the Highlanders’ victory and they eventually outscored the Hurricanes five tries to three. That was no mean feat as the Wellington-based side came into the match as the tournament’s form team after winning their four previous games but they battled to cope with the attacking intensity and accuracy of the hosts, who were deserved winners in the end.

Waratahs: The Sydneysiders backed up last week’s bonus-point win over the Reds with another impressive performance against the Force on Friday. They have caught our eye in recent weeks with the likes of Tom Horton, Jack Dempsey, Jake Gordon, Will Harrison, Alex Newsome and James Ramm in particular standing out as they make their case to new Wallabies head coach Dave Rennie. Horton, Gordon and Ramm have been especially outstanding, with the latter’s booming boot an extra feather in his cap for sure. Next for the ‘Tahs is a huge fixture with the pace-setting Brumbies in Canberra but in this kind of form an away victory is very much on.

The @NSWWaratahs made it two wins on the bounce in Super Rugby AU on Friday night, controlling the tempo on the Gold Coast to keep the @westernforce winless.#SuperRugby #SuperRugbyAU #FORvWAR pic.twitter.com/1W4BWbwRoh

Sale Sharks: After the fanfare which followed Manu Tuilagi’s arrival and the various predictions that the Greater Manchester outfit would be challengers for the title, it was a pretty abysmal performance against Harlequins. It says a lot about their individual talent that, despite everything they did wrong – and there was plenty – the Sharks still managed to come away with a losing bonus-point. Sale have also been consistently slow starters over the past few seasons, so this defeat is not a total shock, but Steve Diamond’s side need to improve if they are to challenge Exeter. Coincidentally, the Chiefs are their next opponents before a difficult midweek trip to play Wasps – it is already a crucial period for the Sharks if they are to qualify in the top-two at the end of the campaign.

Blues v Crusaders blow: There was always a risk, given how coronavirus has ravaged the world, that Super Rugby Aotearoa would be disrupted, but it was still hugely disappointing to see this great clash called off. It was set for a sell-out at Eden Park, with over 40,000 tickets snapped up, and was poised to conclude a competition which has been of supreme quality, but an outbreak of cases forced the match to be cancelled. The decision is completely understandable and, in many ways, to be admired. New Zealand have led the way in showing how to fight this disease and their decisiveness will save many lives. However, the average rugby supporter is no doubt galled that they weren’t able to see two of the strongest teams in the southern hemisphere provide Aotearoa’s denouement.

We will have more details for you about our called off game and what that means for you soon. 💙#BluesTogether pic.twitter.com/SxZoykAPCJ

Crusaders damaging Aotearoa trophy: After being crowned Super Rugby Aotearoa champions, thanks to their Round Nine home win over the Highlanders, the Crusaders were presented with the trophy which was specially made for the tournament. Things went awry, however, as the prize was damaged during their title-winning celebrations and Crusaders chief executive Colin Mansbridge admitted that his team hadn’t fulfilled their role as guardians of the ‘Tu Kotahi Aotearoa’ trophy. The top prize of New Zealand’s premier domestic competition has a 1 carved wooden base representing an upturned Maori ‘waka’ canoe with a ‘Mere Pounamu’ – a ceremonial weapon of Maori chieftains – mounted on top. After the celebrations, images surfaced showing chips on the trophy and the Mere Pounamu was gone. It was found though and the team have sought “cultural advice” to repair the damaged trophy while captain Codie Taylor has apologised on behalf of his team.

Baffling black lives matter stance: The Premiership restarted in controversy on Friday as there was clear division on display in the Sale Sharks ranks ahead of their clash with Harlequins at Twickenham Stoop. Sale were divided regarding the issue of taking a knee in support of Black Lives Matter (BLM) as part of the Rugby Against Racism campaign. Only four players in their starting XV – Sam Hill, Marland Yarde, Tom Curry and Simon Hammersley – opted to take a knee along with four more of their replacements while, by contrast, Harlequins’ entire squad kneeled. What is strange is that Sale’s entire squad warmed up in anti-racism T-shirts but the majority of them were not in favour of taking the knee, which is clearly an anti racism gesture done symbolically after George Floyd’s killing by police in America. All eight of Sale’s South African players opted not to take the knee at the Stoop, something which their countrymen Ruan Ackermann and Francois Venter also refused to do in the Gloucester v Worcester Warriors encounter at Sixways on Saturday. Springbok captain Siya Kolisi recently voiced his support for the BLM movement and it will be interesting to see if the Bok camp is united on this matter when they run out for their first Test later this year.

Yes the message is right, the statements are right, and we've been told the T-shirts mean something, but we cannot ignore the connotations of this

All 8 South Africans stand (with 3 others) and it does not look good at all. We can't just ignore historyhttps://t.co/g8fnTeyqQ3