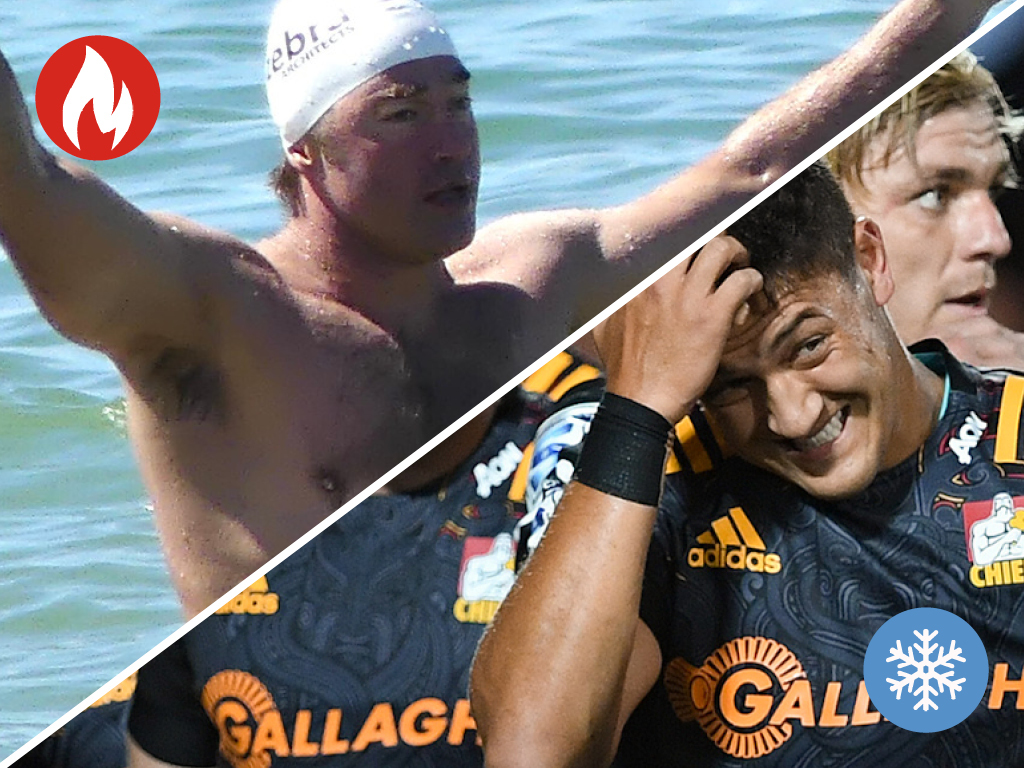 Champion Crusaders: The 10-time Super Rugby winners underlined their status as New Zealand’s strongest franchise as they were crowned Super Rugby Aotearoa champions courtesy of a 32-22 triumph over the Highlanders in Christchurch on Sunday with one round of the tournament to spare. It did not come easy though as Scott Robertson’s troops spent long periods under the cosh and the Highlanders actually held the lead for most of the match. However, the Crusaders’ quality shone through and, in the end, an onslaught during the final quarter, when they scored 19 unanswered points, sealed the win. That means the Crusaders’ last game against their closest rivals, the Blues, at Eden Park this Sunday is now insignificant as they already have the title in the bag. They celebrated their latest success with this haka.

Alex Grove’s incredible swim: Former Worcester Warriors, Edinburgh and Scotland centre Alex Grove deserves plenty of praise after his impressive swim across the English Channel for charity. All the money raised is going to the Acorns Children’s Hospice who provide babies, children and young people aged 0–18 years who have life limiting or life threatening conditions and associated complex needs with a solid network of specialist palliative nursing care and support. Grove’s JustGiving page is on over £30,000 and climbing as his efforts have not gone unnoticed by the general public, with the former player admitting he wanted a test and to take himself out of his comfort zone again.

With reports of a second spike on its way, it was safer to swim than to get public transport..

Thank you to the French couple on Wissant Beach who captured the moment.

Rebels: Dave Wessels’ outfit have built significantly over the past few weeks and it culminated in an impressive 30-12 victory over the previously all-conquering Brumbies on Friday. Despite the difficult conditions, the Melbourne-based outfit were excellent and controlled the match superbly throughout. They touched down four times and kept themselves in the competition by closing the gap to the Canberra side to four points. There is plenty of talent in the Rebels’ ranks and it appears as though it is all coming together at the right time, with special mention going to Matt Toomua who controlled the contest superbly well in the rain. The Wallabies will hope his form continues like this.

Scarlets re-signings: Despite having to part ways with several players and some of their coaching staff in recent months, the Welsh region are building their squad depth after 17 players signed new contracts. Included on that list are the experienced international quartet of Leigh Halfpenny, Gareth Davies, Rhys Patchell and Samson Lee, who have all completed revised terms with the PRO14 outfit. With the 2019/20 season set to resume on August 22, these re-signings will give the Scarlets a massive confidence boost ahead of the derby with Cardiff Blues.

Here they are the 17 re-signings in action… 🌟

Red-hot Waratahs: That was one of their best first-half performance we can remember as the ‘Tahs blew the Reds away in their Super Rugby AU clash. They led 38-0 at the break after crossing for five tries, of which Jake Gordon claimed three, with the Reds shell-shocked by their hosts’ outstanding form. Few had expected such a one-sided game but this showing will give the Waratahs huge confidence going into the competition’s run-in. Replicating it is now the task for Rob Penney’s team as they prepare to face the Western Force this coming Friday. If they play like this against the tournament’s bottom side they should have no trouble building on the strong foundations they have laid.

The @NSWWaratahs were at their ruthless best at the SCG on Saturday night, blowing away the @Reds_Rugby in the first half to climb to third in Super Rugby AU.#SuperRugby #SuperRugbyAU #WARvRED pic.twitter.com/WRhe7jtZrx

One-dimensional Brumbies: Even before the poor defeat to the Rebels the Canberra outfit hadn’t been anywhere near their best, despite their potent maul game. Against a struggling Waratahs side, the Brumbies had to rely on a late try to snatch the win before there was an even later show versus the Reds. In that contest, all of their tries came from mauls and they lacked ideas in general play. The warning signs were there but it evidently wasn’t heeded as they were completely dominated by Wessels’ men. The conditions made it difficult to be effective with ball in hand but the Rebels managed while the Brumbies faltered, with their only score in the first 79 minutes from another set-piece move. They did manage a try from close range which didn’t come from a lineout, but Dan McKellar’s men need to reset ahead of the season run-in.

Tough night at Leichhardt. Back at it in two weeks time for 'Tahs week at the Fortress! #SuperRugbyAU pic.twitter.com/LVZMQnzYaN

Reds: After an impressive start to their Super Rugby AU campaign, the wheels have come off for the men from Brisbane in recent weeks and spectacularly so over the weekend as they suffered that humiliating defeat to their arch rivals, the Waratahs, at the Sydney Cricket Ground. That was Brad Thorn’s charges’ second successive loss but unlike their Round Five encounter against the Brumbies, they were never at the races against the Sydneysiders, who dominated most facets of play and eventually outscored their hapless visitors six tries to two. The tough result means the Reds missed a golden opportunity to close the gap on the Brumbies after the table-toppers’ loss to the Melbourne Rebels.

Chiefs 0 from 8: What awful reading the Super Rugby Aotearoa table must make for Chiefs fans and players. Eight matches, eight defeats under head coach Warren Gatland as their latest loss came at the hands of the Hurricanes on Saturday. Yes, the quality they faced week on week was of an incredibly high standard but to be shut out throughout the campaign cannot be glossed over. They boast quality in their XV and on paper should have surely carded some wins, with that opening late defeat at the Highlanders unfortunately setting the tone for their season. One has to wonder would things have gone differently had Bryn Gatland not knocked over that drop-goal against his father’s troops.

England Sevens fallout: The wheels are very much in motion from the Rugby Football Union as they look to reduce costs, with the Men’s and Women’s Sevens game one area feeling the axe. England legend Dan Norton was speaking to Sky Sports last week and the reality of this bleak situation is beginning to hit home and how, with the finisher revealing: “On Monday we were told our contracts would not be renewed come the end of August and we would all be out of a job…the standpoint from the RFU is to end the programme until further notice.” This is a serious move and one that leaves players suddenly unemployed. One can sympathise with the RFU in that there is no World Rugby Sevens Series for the foreseeable future but it’s a dreadful situation for the specialist players, who must be worried about their future at the moment.