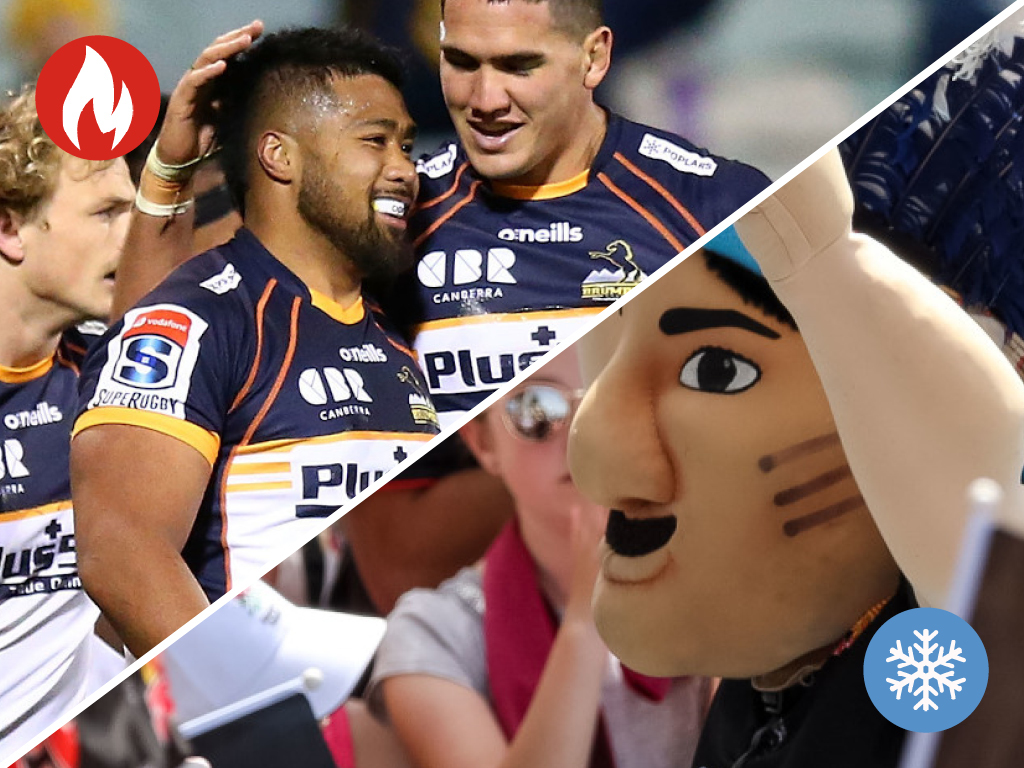 Brumbies maul: It just cannot be stopped. The Reds were the latest team to feel the full force of the Brumbies’ pack as the men from Canberra crossed not once, not twice, but three times in their Super Rugby AU fixture on Saturday. With hooker Folau Faingaa at the tail and claiming most of the plaudits due to his ridiculous try-scoring numbers – he has 24 tries in 37 games – the Wallaby crossed twice on the day before replacement hooker Connal McInerney added a third try late on and then Mack Hansen nailed a game-winning penalty. The body positions and setup of the maul stood out as their lethal weapon again stole the show and left their rivals with no answers on how to stop it.

Eight-nation tournament: Following the conclusion of the Six Nations in October, the countries that compete in that tournament are set to take part in another competition immediately following it, which will likely include Fiji and Japan. It is an excellent idea after the usual end-of-year Tests were curtailed because of the coronavirus pandemic. Regulations makes it difficult for South Africa, Australia and New Zealand to travel around Europe freely, so this seems a decent compromise. It will also be wonderful to see the talented Fijians and Japanese get more exposure at the top level against tier one nations. Bring it on.

Blues: The men from Auckland stayed in touching distance of the Crusaders, at the top of the Super Rugby Aotearoa table, as they delivered an excellent all-round performance which paved the way to a 32-21 away victory over the Highlanders on Sunday. Leon MacDonald’s troops showed their intent from the start of the match and took the fight to their hosts with their attacking style of play. They were eventually rewarded with a bonus-point triumph and will be hoping the Highlanders can do them a favour by beating the Crusaders on Sunday before they host the team from Christchurch at Eden Park in their last match on August 16.

Crusaders and Sam Whitelock: After the Hurricanes ended their 36-match unbeaten record in Christchurch in Round Seven, the Super Rugby Aotearoa table-toppers were determined to bounce back against the Chiefs in Hamilton over the weekend. The Crusaders showed why they are the most successful outfit in Super Rugby history as they came to the fore with another outstanding attacking display en route to a 32-19 triumph, outscoring their hapless hosts five tries to one in the process. The result was a fitting reward for veteran second-row Sam Whitelock, who was making his 150th appearance in red and black, and to celebrate the momentous occasion his jersey from the fixture was put up for auction. Over $NZ6000 has already been raised and the figure was still climbing at the time of writing. All the proceeds will be donated to a charity called Farmstrong, who are helping rural wellbeing among New Zealand’s farming community.

That call for the Sevu Reece try: At 19-20 down with an hour on the clock, the Chiefs were very much in the game against the Crusaders as they searched for that elusive first victory. It was therefore disappointing that this contest would turn on a contentious decision from referee Ben O’Keeffe and his match officials. It looked to us like Crusaders second-row Quinten Strange was clearly losing the ball forwards as it went to ground, but that was not the view of O’Keeffe and the try for Reece stood. That call appeared to take the wind out of the Chiefs and the Crusaders duly pounced, eventually cruising to a much more comfortable success than the scoreline suggests. Much like the commentary team and Chiefs head coach Warren Gatland, the decision left us scratching our heads.

Exeter Chiefs’ branding error: We don’t quite understand the reluctance of the West Country side to follow the example set by other teams, most notably the Washington Redskins in the NFL, and distance themselves from their Native American branding. As local MP Ben Bradshaw stated: “If the Washington Football Team in America can change their long standing name, you would have thought those in charge of the Exeter club might take this issue a little more seriously. It’s not the image Exeter as a city wants to project to the world.” CEO Tony Rowe has shown himself to be rather insensitive and out of touch at times, as evidenced by the Flybe controversy earlier this year, and this is another poor decision. They are a great club with many wonderful people within the organisation but they have got this one wrong.

To be clear, it is possible to believe – as I do – that Exeter is a great club, with good people and fans who have done a lot for rugby and their community AND that the branding needs changing.

This is not a binary argument.

Dubai and Cape Town cancellations: The impact of the coronavirus pandemic continues to wreak havoc with our beloved game and the recent announcement that the opening legs of the 2020/21 World Rugby Sevens Series – at the aforementioned venues – have been cancelled was unfortunate as both tournaments were well supported. It’s a real shame for Sevens that World Rugby were forced to make that decision but these are difficult times and apart from the game’s fans being robbed of the opportunity of seeing some of the world’s best players in action at these popular venues, the financial impact will also be keenly felt as pressure grows on players and the various unions, who are struggling to generate income at this time.

🗣️ "This is a very disappointing development but far from unexpected."

Bad week for Highlanders: It has been a difficult seven days for the Dunedin outfit as it kicked off with an incident at an apartment in Queenstown that some of their players were attending but not directly involved in. An apologetic statement was released by CEO Roger Clark reminding his Highlanders players of their responsibilities but the week did not improve thereafter as a heavy loss to the Blues on Sunday meant they suffered a fourth defeat from six games, leaving them well off the pace set by the Crusaders. The defeat was unfortunately marred by Aaron Smith’s theatrical dive over Karl Tuinukuafe too that earned his side a penalty. Yes, the All Blacks prop was offside and in Smith’s general path but there’s no need for antics such as those shown by Smith as he tripped himself up over the Blues man. One expects better from one of the tournament’s form players.