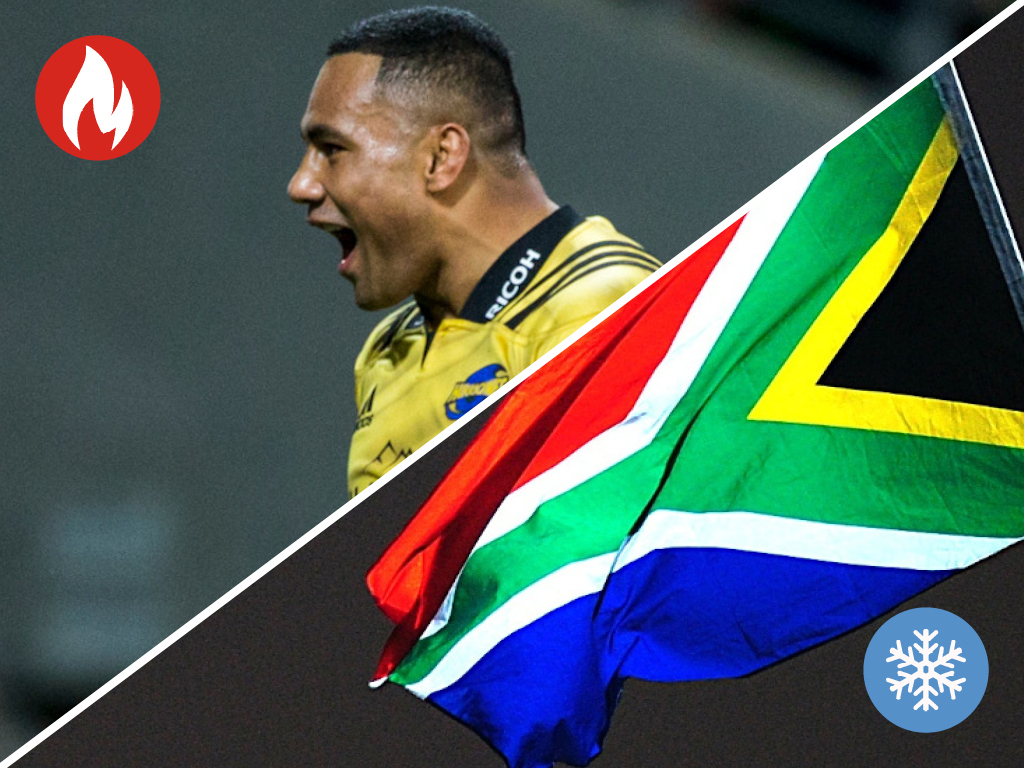 Ngani Laumape: After some low key showings during Super Rugby Aotearoa’s earlier rounds, the Hurricanes inside centre hit his straps during his team’s 29-27 triumph against the Blues in Wellington on Saturday. From the outset, Laumape’s direct running style proved difficult to contain and he crossed the whitewash as early as the fourth minute after a trademark barnstorming run. He continued to prove a handful as the match progressed and gave a timely reminder of his capabilities to All Blacks head coach Ian Foster. Apart from his five-pointer, the 27-year-old ran a match-high 160 metres from 17 carries which included four clean breaks, five defenders beaten and two offloads. A fired up Laumape also had a message for his haters after the game as he silenced the doubters.

More Saracens retentions: On the back of Sean Maitland, Jamie George and Manu Vunipola committing their futures to the club for life in the Championship, Saracens were last week given further shots in the arm ahead of next season. England and British & Irish Lions quartet Mako Vunipola, Elliot Daly, Owen Farrell and Maro Itoje were the latest star players to sign on the dotted line in what is a monumental boost for the club as they prepare to drop into the second tier of English rugby. The loyalty they are showing is commendable but what is also interesting is how these extensions should both keep these players fit and fresh ahead of what is a jam-packed late 2020 and 2021, which includes the Six Nations and also a Lions tour to South Africa, which will go ahead in July and August.

Highlanders’ fightback: The men from Dunedin looked dead and buried for the majority of their Super Rugby Aotearoa match against the Chiefs in Hamilton but refused to raise the white flag and were rewarded with a thrilling win in the end. The Chiefs dominated the opening half and raced into a 24-0 lead before a converted Marino Mikaele-Tu’u try, just before half-time, gave the visitors a faint chance of securing victory. The hosts made it 31-7 early in the second half which left Aaron Mauger’s charges with a mountain to climb but they did just that and scored 26 unanswered points during the rest of the match. Tries from Mitch Hunt, Aaron Smith and Jona Nareki set up a tense finish before Sio Tomkinson drew the sides level when he crossed for another five-pointer after the full-time hooter had sounded. Hunt’s successful conversion sealed a remarkable win for the Highlanders, who also beat the Chiefs in dramatic fashion courtesy of a last-gasp Bryn Gatland drop-goal in the corresponding fixture last month. They do love a comeback win.

Match winner! What a play from the Pulse Energy Highlanders

Sale Sharks’ big signing: When director of rugby Steve Diamond says that they are not in talks with a player, it usually means a deal is close, so it didn’t come as much of a surprise when they announced that England centre Manu Tuilagi had joined, but it is still a mightily impressive addition. Once one of the more fiscally underpowered sides in the Premiership, the Greater Manchester outfit have grand ambitions under owners Simon Orange and Ged Mason, who took over in 2016. They have invested heavily and Tuilagi’s capture bolsters an already strong squad, which will no doubt have title ambitions when the season resumes in mid-August. The Sharks are in second place, just behind Exeter Chiefs, and were in outstanding form before the campaign was suspended in March.

Jaguares’ dwindling stocks: It has been sad to witness the growing list of players jumping ship, so to speak, from the Argentine outfit in recent weeks. The club of course did advise their squad to take overseas contracts if they were on offer and that’s exactly what’s happening as big name after big name gets picked off by teams in Europe. Vastly experienced trio Jerónimo de la Fuente, Matías Alemanno and Matías Orlando have joined the exodus as they were snapped up by Perpignan, Gloucester and Newcastle Falcons respectively, with the Jaguares’ future appearing all the more bleak as Super Rugby looks for more localised model.

🗣️ "He’s a physical and abrasive player, and his style of play will really suit the Premiership." #GallagherPrem

🍒 Gloucester bolster their pack by bringing in Matías Alemanno. 👇 https://t.co/CgHLhZ2c8h

Tigers youngster in intensive care: Last week it was announced that Leicester youngster Taylor Gough was in intensive care at Queen’s Medical Centre in Nottingham, where the 20-year-old back-row has been since mid-June after being involved in a major road incident. Gough suffered multiple injuries, including severe spinal injuries, on the weekend ahead of the squad’s return to Phase One training at Oval Park and is currently suffering from paralysis and is unable to move his legs. The awful news led to rugby rallying around the player and his family and Gough’s JustGiving page is currently on £37,313. While that is a nice gesture – hopefully that number continues to grow – it does little to relieve the pain Gough and those around him are feeling right now. We wish them all well.

One of our Acad boys had a car crash last month, this is his just giving page for private spinal rehab. Kids a fucking legend if you got a few quid *spare* in these tough times, all of us from the club would appreciate the help.https://t.co/YUF6KqIpf3

The death of South African rugby? While we support a general restructuring of Super Rugby, with the inclusion of a Pacific Island team a particular positive, we are concerned for the future of rugby in South Africa. For starters, they don’t appear to be especially happy to have been left out of the conversation by New Zealand Rugby when they are directly affected by the reported alterations and, secondly, they don’t really care about European rugby. Shoehorning them into a competition (the PRO14) the supporters don’t want the franchises to be in is not good for anyone as the product suffers and the fans lose interest. The crowd sizes for the Southern Kings and Cheetahs is testament to that. We’re not even sure including them in the Champions Cup would help, given the fact that, once again, the majority do not have any real interest in what happens north of the equator.

Tussle for where Pacifika team is based: Staying on the subject of Super Rugby, it has been somewhat comical that after years of Fiji, Tonga and Samoa struggling to break down the door for a spot in the competition, suddenly there’s a fight between Australia and New Zealand about who might host the new team. Sydney or Auckland are reported to be the cities, with Rugby Australia saying it would be “madness” for any Pacific Island team to be based in the latter and that their proposed home would be better due to many islanders being situated there. While we welcome the addition of a Pacifika side and of course it must be financially beneficial, surely Fiji playing games in Fiji is the ideal scenario? After all, they do host Fiji Drua in Australia’s National Rugby Championship.

I am sorry kind sir, the last time I checked western Sydney & Auckland were not in the Pacific Islands?

The plundering of our talent has gone unchecked for years and now the arrogance in the attempted appropriation of a team & culture from our region…https://t.co/bNO5dXt5qa