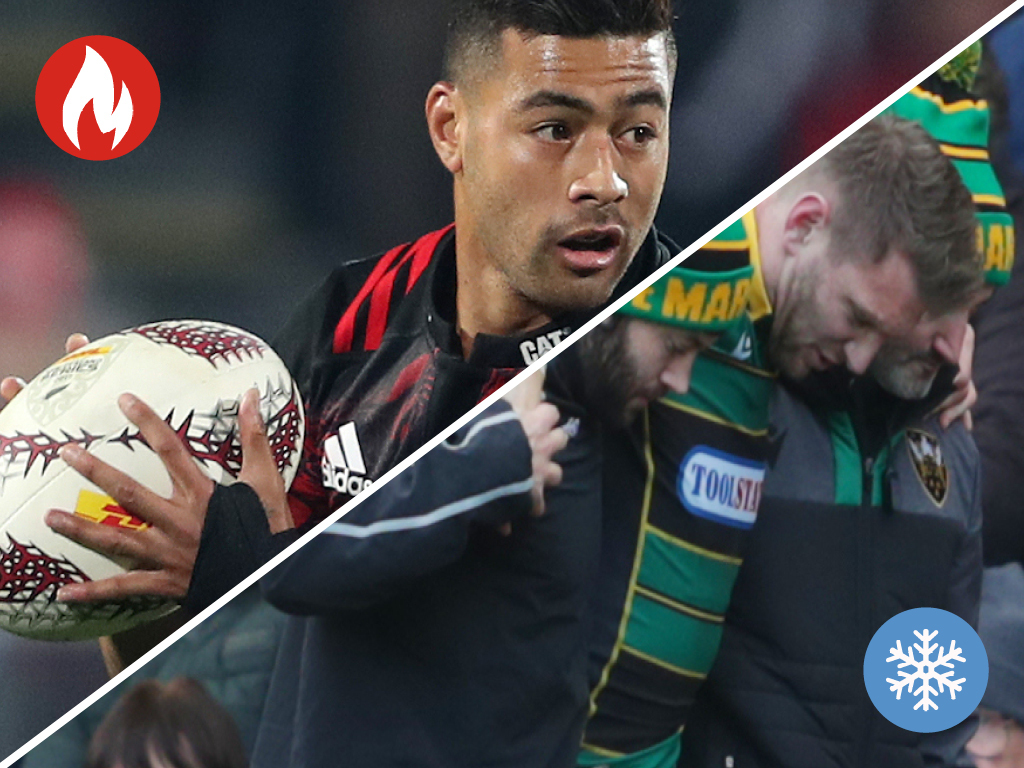 Richie Mo’unga masterclass: An incredible showing from the Crusaders fly-half as he stole the show against an in-form Blues outfit on Saturday. The top-of-the-table Super Rugby Aotearoa clash was a classic as big names went up against each other and did not disappoint those watching, with Mo’unga grabbing the headlines with several moments of class. Down 9-15 in the game, Mo’unga took it upon himself to regather his own short restart and set off downfield, inspiring his team-mates to follow him. Put simply he was the catalyst of the Crusaders’ revival and ultimate win as they moved six points clear at the summit in style.

Players sticking with Saracens: Yes, some have moved on as Saracens prepare for life in the Championship, but it was encouraging to see a fair share of loyalty from players who have opted to re-sign with the soon-to-be relegated club. British & Irish Lions duo Sean Maitland and Jamie George followed young fly-half Manu Vunipola in inking a new deal this past week and to have the Scotland wing and England hooker remain on their books is a massive shot in the arm for Mark McCall’s team. One expects there is more positive contract news on its way this week but also don’t be surprised if one or two stars do head out on loan.

🗣️ "I couldn't be happier to have signed for a few more years."

Massive double re-signing at Blues: Despite the 26-15 loss to the Crusaders on Saturday, it was another good performance from an improving outfit. The Blues appear to be building nicely and the news that Hoskins Sotutu and Mark Telea have committed their future to the franchise is a further boost. Both were impressive against the best team in the southern hemisphere and are surely contenders for a position in the All Blacks squad later in the year. In particular, Sotutu has been a standout performer in Super Rugby Aotearoa and could well be the man selected to be the long term successor to Kieran Read at number eight.

Hoskins Sotutu…is there anything you can’t do?

Exeter’s 30 extensions: We’ve seen mass contract extensions in the past but this takes it to a whole new level. On Sunday the Chiefs announced that 30 players had put pen to paper on long-term deals, including the likes of Stuart Hogg, Jack Nowell, Henry Slade, Luke Cowan-Dickie and the Simmonds brothers. In the current climate one has to take their hat off to Exeter as they have managed to sort out their players’ futures under the global financial cloud which has affected so many. For 30 players to commit to the Sandy Park outfit says a great deal about the club, director of rugby and environment the Chiefs have built.

Australia’s losing battle: It has been quite stark the difference in quality between Super Rugby Aotearoa and AU, with thrilling New Zealand derby games being followed by rather drab encounters between the best Australia has to offer. Both competitions are currently trialling new laws but those adopted in Super Rugby AU are far more revolutionary. However, those to the left of the Tasman Sea seem to have forgotten that making these alterations will not automatically make it more entertaining. The quality on offer in Aotearoa is great, which means Australia’s deficiencies is nothing to do with the rules and regulations of the sport. Introducing rugby league-like laws will not improve things and nor will it attract fans from the other code, let alone other sports in the country.

Premiership player welfare: The Premiership announced that it will return on August 14 when Harlequins take on Sale Sharks at the Twickenham Stoop, but there are concerns about the stress the schedule will be put on the players’ bodies. The next four rounds have been confirmed, with one midweek set of matches, but a couple more are expected to be added. With player welfare at the forefront of people’s minds, it really is not a good look, even if the integrity of the competition is vital. According to Premiership Rugby CEO Darren Childs, the clubs are on board, so let’s hope everybody gets through this next year unscathed.

As expected #PremRugby schedule will be brutal. Players on pay cuts told to play 7 times in 28 days & mid-week, then top guys will go straight into Tests then back to new season that ends in June 2021… then the #Lions tour until August. 12 month seasonhttps://t.co/NP8zGkIfsf

Fight at club game: Rugby hit a low point in New Zealand on Saturday when an altercation, initially between two players in an Auckland premier club match between Suburbs and Pakuranga, erupted into a full-on brawl involving spectators after the duo were both red carded. The alleged incident, which included supporters and players of the two sides, is reported to have taken place after the final whistle and a witness said up to 20 people were involved. The brawl left several people bloodied and bruised and although the police were called, everyone involved had left by the time they had arrived. Hopefully Auckland Rugby will conduct a full investigation into the incident and take stern action against the guilty parties as such despicable behaviour does not belong in the game.

Michael Fatialofa’s medical bill: One can only imagine the shock in the Fatialofa household when a £100,000 medical bill arrived with his name on it. The former Worcester lock, who is continuing his recovery from a serious spinal injury sustained in a Premiership game, initially feared paralysis as his world was turned upside down in January. However, his recuperation and hard work has been incredible as he’s now walking and the Warriors have also kindly allowed him to use their club facilities as he continues to rehabilitate. The club are “concerned and disappointed” by the medical bill but are “working with the hospital and local Clinical Commissioning Group to help resolve the situation”. Let’s hope the resolution is swift and Fatialofa can once again focus solely on his recovery.