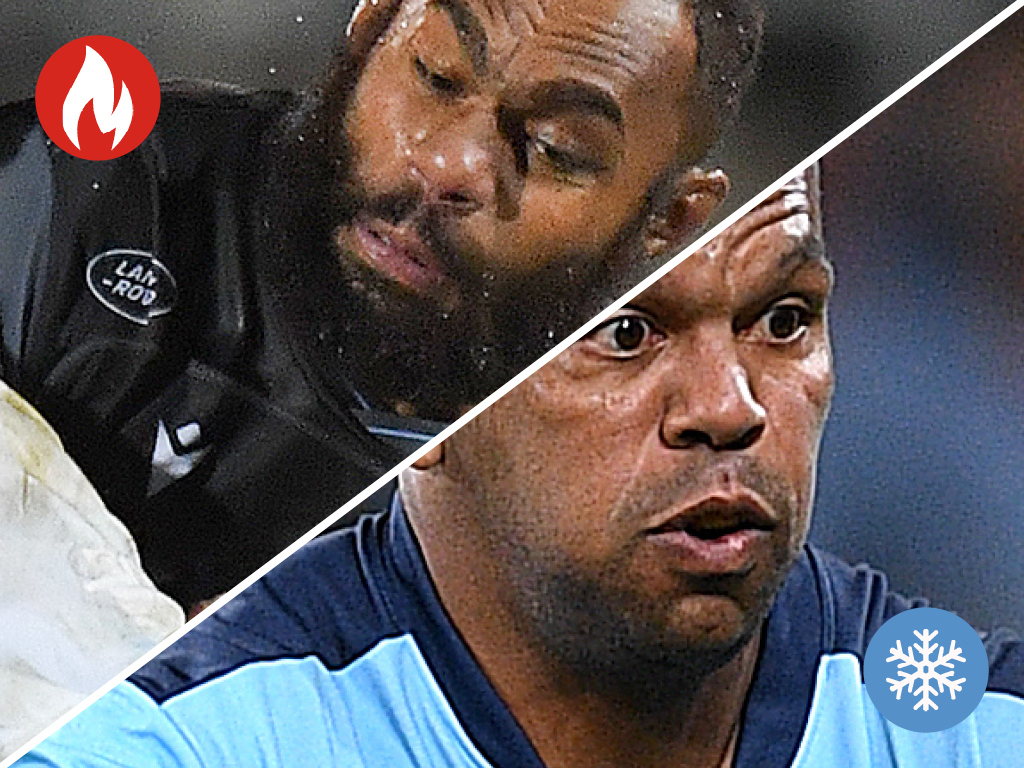 Caleb Clarke and Blues: It was quite the performance from the young Blues wing against the Highlanders on Saturday as he scored a try, set up another, ran for 86 metres and was a genuine threat whenever he touched the ball. However, what made this showing all the more remarkable was that Clarke produced it under incredibly difficult circumstances. The 21-year-old was visibly upset in a post-match interview as it was revealed his grandfather had passed away only hours before kick-off of the game. What remarkable strength to churn out a shift like that with something so heavy weighing on his shoulders. He was a big part of the Blues making it three wins out of three in Super Rugby Aotearoa, with that man Hoskins Sotutu once again also standing out at eight.

Caleb Clarke 🏉▶️ Rieko Ioane… a combo that will give defenders nightmares for years to come! 👏

They combined brilliantly to give @BluesRugbyTeam a 22-10 lead over the @Highlanders in @SuperRugbyNZ.

George Skivington’s big step up: Skivington’s current club, London Irish, have expressed their unhappiness about Gloucester’s approach for Skivington but despite the fallout, his appointment as the Cherry and Whites’ new head coach is sure to bring the feelgood factor to the Kingsholm-based club. Gloucester have moved quickly to find a replacement for Johan Ackermann, who left to join Japanese Top League outfit NTT Docomo Red Hurricanes last month. It’s clear Skivington’s appointment is a significant leap from his Exiles role, but his reputation in the sport is strong, with his soon-to-be fly-half Danny Cipriani saying he is the “most exciting announcement of a head coach I’ve seen in rugby, forward thinking. The type of man you build a club around. Very grateful I’ll get to play out my last years under him.” Praise indeed as his coaching career takes a giant leap.

If the new boss has been checking out his highlight reel, he'll be excited too 🔥pic.twitter.com/LkbMehtTht

Glasgow Warriors keep Fijian star: Following the coronavirus pandemic, it has every club, franchise, province, region and union adjusting their budgets accordingly, but the Warriors have managed to hold on to one of their prized assets. Leone Nakarawa made an immediate impression after his return to Glasgow in January, scoring a try against Sale Sharks on his second debut for the club. Nakarawa had only made two further appearances when the campaign was curtailed but they have agreed an extension to his contract for another year at least. It will be a huge boost for the Scottish outfit, who are in a period of transition with Danny Wilson replacing Dave Rennie as head coach but with Nakarawa in the engine room, they’ve box office talent that will help their cause.

How excited are you to see him back in #GuinnessPRO14 action? 😁

📽 Relive his stunning hat-trick in 2016 as Glasgow downed Zebre in a 70-10 win 👇 pic.twitter.com/0kZLoLSbsv

Champions Cup confirmation: There was some good news in Europe last week as the EPCR announced that the Champions Cup and Challenge Cup quarter-finals will take place on the weekend of 18/19/20 September. A week later, the victors in those contests will go head-to-head in the last four encounters, while the respective finals are set for mid-October. This is all subject to government guidelines and with the health and welfare of those involved to the fore but it’s definitely hugely positive for rugby fans and something to look forward to later in the year. Next season’s European competitions are now scheduled to begin in December, it was also confirmed.

EPCR can confirm that the #HeinekenChampionsCup knockouts will be held over the weekend of the 18th, 19th and 20th September 🙌

All Blacks v Kangaroos proposal: News broke last week that New Zealand Rugby have confirmed talks are underway for a hybrid exhibition clash between the All Blacks and rugby league’s Kangaroos. Yes, while this would be decent watch and a boost to NZR’s coffers at a difficult time, it does feel yet again like a slap in the face for the island teams. As someone put it, Fiji, Samoa and Tonga are now behind another sport when it comes to the pecking order of playing the All Blacks and while we do sympathise, as money must be grabbed, there’s also a balance between interesting spectacle and pointless event. We’re keen to get your opinion on this one but in our eyes past experiments between the codes just don’t seem to be worth it – on the field at least. Discuss.

The all blacks will play a whole other sport before they tour the Pacific islands 🙄 https://t.co/jbd4UClnJd

Scott Barrett and Luke Jacobson injuries: The Crusaders and Chiefs suffered setbacks when the All Blacks duo sustained serious injuries which will keep on the sidelines for the remainder of Super Rugby Aotearoa. Barrett, who was appointed as the Crusaders’ new captain ahead of this year’s curtailed Super Rugby tournament, has been ruled out after undergoing surgery on a foot problem, although his team have coped well without him as they have won their first two games. That has not been the case for the Chiefs, however, who have lost all three their matches in that competition. Jacobson was sidelined due to a fractured metacarpal sustained in their second game, against the Blues, and his presence was certainly missed in the loss to the Crusaders on Sunday.

🗣️ "The rehabilitation period is approximately five to six weeks."

Gloucester exodus continues: There aren’t many teams that have had a worse lockdown than the Cherry and Whites, who have seen their director of rugby and head coach depart, and now eight players. The hierarchy may, of course, feel that losing the likes of Johan Ackermann and David Humphreys, as well as four Test players, are necessary for the club to move forward, but it looks like an outfit in disarray. Franco Mostert, Owen Williams, Callum Braley and Ruan Dreyer have all left, while Franco Marais, Tom Marshall and talented youngster Aaron Hinkley are also notable names on the list as the West Countrymen attempt to replenish their playing stocks.

Gloucester Rugby can confirm a number of departing players.

We'd like to place on record our thanks to them, and wish them the best of luck in the next step of their careers.

Kurtley Beale departure: With Australia’s Super Rugby AU competition set to kick off this week, the Waratahs were dealt a blow with the news that they’ll be without the services of the veteran Wallaby. Beale was released from the remainder of his Waratahs contract to join Racing 92 and his experience and attacking prowess will be missed by the Sydneysiders, who he represented in a record-equalling 148 matches. Since making his Super Rugby debut way back in 2007, the 31-year-old has become one of the Waratahs’ standout players and he also became a Wallabies stalwart after making his Australia bow in 2009. Replacing a player of such a high calibre will be difficult for the ‘Tahs and don’t be surprised if Rob Penney’s men struggle without Beale in Super Rugby AU.

Kurtley Beale is set to depart the @NSWWaratahs before the #SuperRugbyAU competition kicks off next month.https://t.co/ayUXWFQB3Q

Fallout from the Skivington move: With reaction on social media barely cold after Gloucester’s announcement that Skivington would be joining them as their new head coach from this Friday, his current team, London Irish, released a statement that made clear their feelings about the switch abundantly clear. Premiership rivals the Exiles are reeling as they say there was no “proactive communication whatsoever from Gloucester” and with Skivington being under contract at the Reading club until the summer of 2021, they’ve every right to feel upset. Gloucester have since responded but it’s not a good look and one that Premiership Rugby must now mediate.