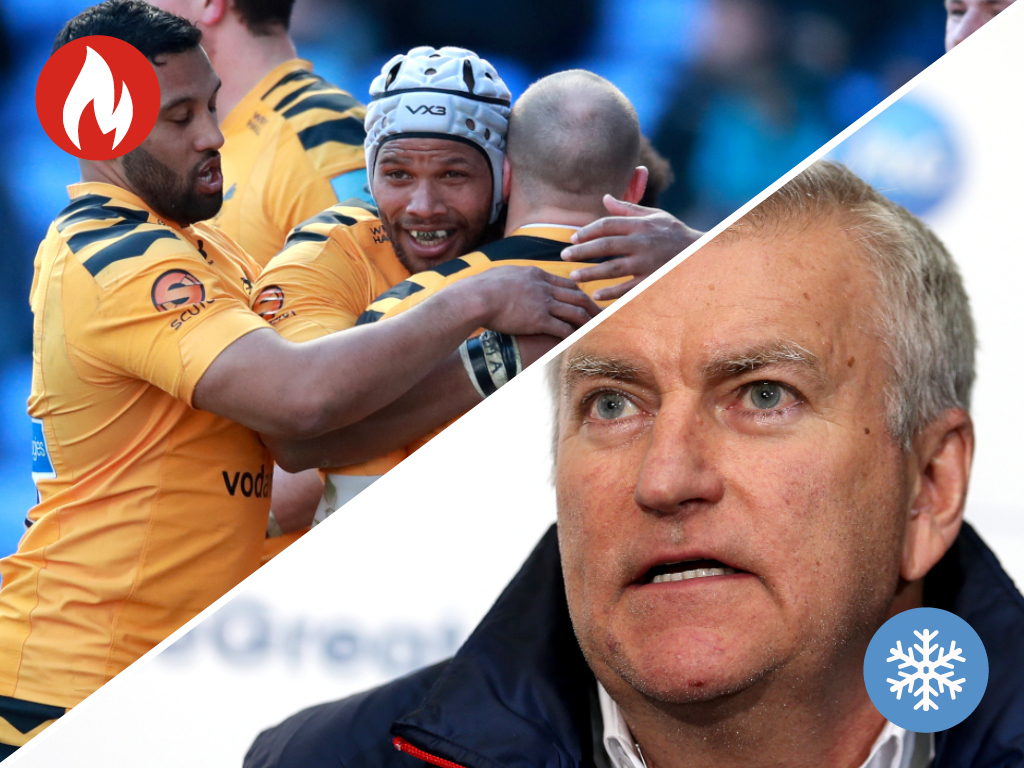 Michael Fatialofa’s injury progress: There’s still a long way to go for the second-row but it was heartening to see the New Zealander walking unaided in hospital following a horrific injury sustained for Worcester Warriors back in January. Fatialofa sustained damage to his spinal cord after a freak incident in a Premiership match against Saracens, which could have left him paralysed. However, the 27-year-old has made remarkable progress with his wife, Tatiana, describing it as a miracle when she posted a video documenting how the former Hurricanes man was developing.

Things you love to see 💙💛

Stormers doctor: Speaking of freak incidents and World Rugby Player of the Year Pieter-Steph du Toit can be thankful to Stormers doctor Jason Suter and his medical team, who quickly diagnosed a rare injury during their loss to the Blues in Super Rugby. Du Toit came off with what appeared a minor complaint but Suter spotted that it was more serious and the flanker could have lost his leg. Fortunately, the excellent work of the medical experts saw the Springbok representative operated on quickly and the problem dealt with efficiently.

🗣️ "It’s very unusual, very rare but they had to cut through the muscle to release the pressure and they were only able to close that leg 10 days after his initial injury." #SuperRugby

Those who have kept spirits high: In such testing times for everyone, particular credit must go to those that are trying their best to keep people upbeat. One of those is rugby commentator Nick Heath, who produced a series of very funny videos on Twitter by using his skills to turn mundane events into something quite hilarious. Another to be especially prominent is Worcester Warriors prop Ethan Waller as the players look to keep their fitness and strength high during self-isolation.

Some unions’ response to coronavirus: Well done to the Scottish and Welsh governing bodies, who appear to have put in place plans to help out clubs that are in need. A disaster fund has been set-up, which is a necessity in difficult times such as this, as all sports look to weather the storm caused by the coronavirus outbreak. Although the Scottish Rugby Union (SRU) and Welsh Rugby Union (WRU) have their critics, both have initially responded impressively to the challenges facing the game.

Wasps’ community work: Another to come out with significant credit over the past week is the Midlands outfit, who have looked to help those most at risk from this disease. They have delivered fruit and vegetables to the people in need and called elderly supporters to offer some sort of social interaction while they are isolating at home. It is an outstanding thing to do and hopefully more clubs from around the world do the same during this enforced break.

🛍️ So we managed to get a few more fruit and veg packs and the @WaspsCommunity team have been out delivering them today! #WeAreWasps #OurCommunity pic.twitter.com/Agksekc92G

Inevitable financial losses: Without games following the suspension of all leagues around the world, the question comes over how all sports will deal with it financially. As Gloucester CEO Lance Bradley stated, they will gain little to no income over the next few months, which will put strain on the club. Several outfits, including the Cherry and Whites, have already announced that their players have taken pay cuts, while the Irish Rugby Football Union and their provinces have agreed to pay deferrals. We can only hope that the burden will not be too much, which may force some to go into liquidation.

Tough day today, having to tell our players and staff we need to cut everyone's wages by 25%.

But I was incredibly proud of their response – "we'll do what it takes to get our Club through this".

It really brought a lump to my throat.

RFU’s lack of response to coronavirus: While we praised the SRU and WRU, the same cannot be said of their English counterparts, who are showing a distinct lack of leadership at the moment. They have concluded the season for all teams below the Premiership but what does that mean for promotion and relegation? The RFU also haven’t currently offered financial support for clubs, even if the governing body have stated they are “investigating a range of options.” Hopefully some sort of plan will be laid out sooner rather than later as the whole game in England currently has more questions than answers.

It will be recorded in history how little leadership the top brass of English rugby showed at the onset of the Coronavirus crisis. Good on WRU and SRU. https://t.co/tXggj3vD7k

A sad goodbye for Matthew J Watkins: Following the sad death of the former Wales centre from a rare form of cancer, it was announced that his funeral will be limited to family and close friends due to concerns over the coronavirus. While the decision is absolutely correct, it is a shame that people will not be able to pay their respects at the service for a man who was hugely liked and admired throughout his life.

Ealing Trailfinders: After the RFU’s announcement that all league and cup rugby beneath the Premiership has come to an end for this season, due to the Covid-19 pandemic, the Championship’s second-placed team hit the headlines when it was revealed they are considering legal action if table-toppers Newcastle Falcons are handed promotion to the Premiership. No such decision has been made yet, despite the Falcons winning all 15 of their matches and holding an 18-point lead over their nearest rivals. The timing of Ealing director of rugby Ben Ward’s comments was not good and we have to agree with Falcons boss Dean Richards’ view that it “reflects very poorly on them considering everything else going on in the world right now.”