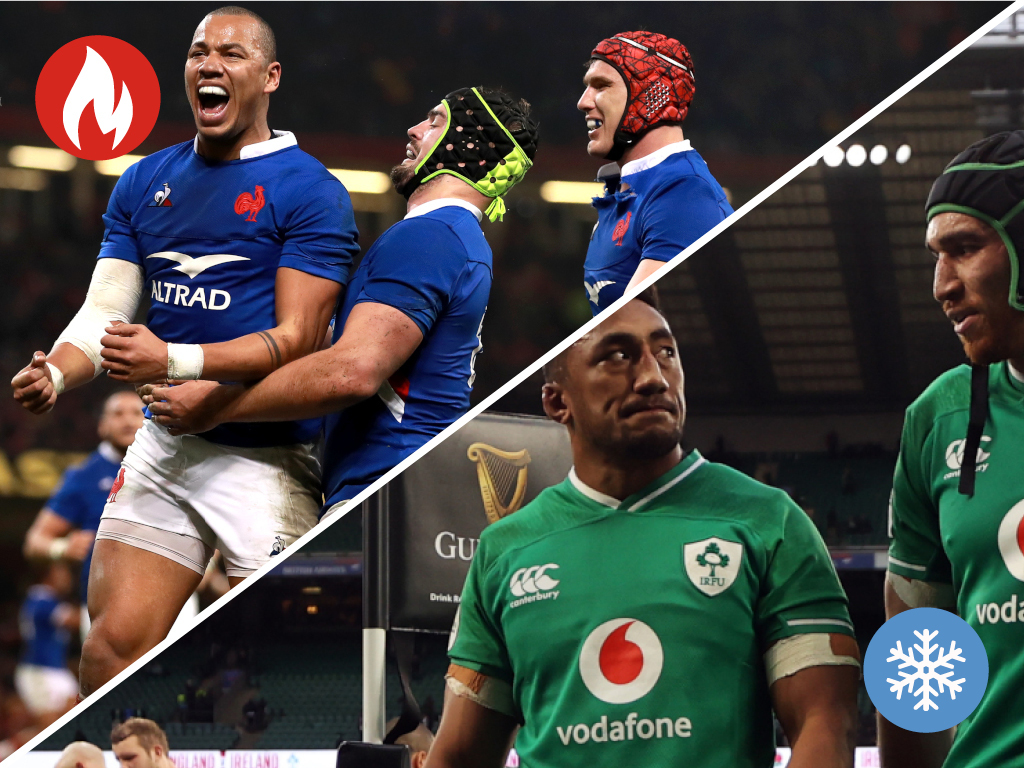 France: Fabien Galthie’s tenure as Les Bleus head coach is going from strength to strength after their latest win over Wales in Cardiff. To win two games at home, while impressive, was always going to be downplayed until they made their first trip on the road. It doesn’t come much tougher than Wales at the Principality Stadium but France were outstanding, particularly defensively, as they prevailed 27-23 to keep their Grand Slam dream alive. If they replicate this form then Scotland and later Ireland will find it extremely difficult to stop that happening.

Wasps and Exeter: Where did that come from? Yes, Wasps were playing a weakened Saracens side but as we have seen so many times with the European and English champions that rarely impacts on their performance. Wasps were outstanding as they prevailed 60-10 at the Ricoh Arena, running in eight tries in all to give Lee Blackett and the struggling club something to smile about after a tough couple of weeks due to Dai Young’s shock departure. On Sunday, Exeter were even better as the Premiership leaders demolished second-placed Northampton 57-7 at Sandy Park, sending a message to their rivals they are most definitely the team to catch.

🍾 We're getting sick of putting this photo out after home games!

Marland Yarde and Ollie Hassell-Collins: Two wings who contributed significantly to their sides at the weekend after scoring hat-tricks for Sale Sharks and London Irish respectively. For Yarde, it was a particularly special day having suffered a horrific knee injury in October 2018. Although the England representative returned to action late last year, it has understandably taken a while for the wing to get back to his best form, but he produced an outstanding display against Leicester. Meanwhile, Hassell-Collins is a young player that has adapted superbly to life in the Premiership and went one better than Yarde on Saturday by touching down on four occasions against Gloucester. He also scored a ‘cheeky’ second try, which was rather brilliantly captured by a photographer.

Edinburgh: The Scottish outfit have put together a series of impressive results which has seen them move to the summit of Conference B. Richard Cockerill’s men have won six of their past seven games in the PRO14, including away wins at play-off rivals Munster and Scarlets, to take them three clear of the Limerick side. Cockerill has also, rather quietly, put together a squad full of depth and quality when you consider their last two wins have come during the Six Nations period when they lose more than most to Scotland.

You may think you can stop @duhanvdmerwe, but you can't.

Reds: While they came into last week’s match on the back of three straight losses, those who had watched those performances were not buying into any criticism of the Reds’ game. They’ve been playing some promising rugby thus far in 2020 and it all came to the boil against the Sunwolves as they ran out 64-5 winners. Half-backs Tate McDermott and James O’Connor are forming quite a partnership but it was the team as a whole that impressed, with Brad Thorn’s hard graft with them showing as they racked up their most points ever in a Super Rugby game.

Ireland: After the improvement against Wales, this was a pretty awful effort from Andy Farrell’s men as they went down to England on Sunday. The Irish were physically overwhelmed from the first minute and made a series of individual and system errors, which enabled the hosts to take command. Not much has changed under Farrell in terms of the style of play, while experienced half-back duo Johnny Sexton and Conor Murray are not playing well. On a positive note, a relatively young bench did well when they came on and their U20 side produced a stunning display to dispatch their English counterparts on Friday, which suggests the future is bright, but you feel that the coach needs to be brave and make changes now, rather than two years down the line.

We had no platform to try any of the things we would have wanted to go for.

Italy: Another Six Nations Test and another loss for the Azzurri, who came off second best in most facets of play in their 17-0 defeat to Scotland in Rome. That means Italy have now lost 25 matches in a row in the Six Nations and that record is the worst losing streak in the history of the tournament which started way back in 1883 as the Home Nations Championship. It is also the first time a side has been pointless twice in a Six Nations. Their dire run, which stretches back to February 2015, is a bad reflection on the Azzurri and will, once again, lead to calls for them to be dropped from the competition, especially with Georgia hammering Belgium 78-6 on Saturday.

So what do you make of this then? 🤔#GuinnessSixNations pic.twitter.com/8Fp8SJKfIX

Luke Jacobson’s comeback: After overcoming concussion issues, which ruled him out of New Zealand’s 2019 Rugby World Cup campaign, the All Blacks blindside flanker made his return to action for the Chiefs against the Brumbies on Saturday. Jacobson’s highly anticipated comeback proved to be an anti-climax, however, as he was forced off the field with a hamstring injury after just 10 minutes. The 22-year-old’s injury proved disruptive for the Chiefs as they suffered a 26-14 defeat to the impressive Brumbies, their first loss of the Super Rugby season.

Luke Jacobson having a scan on his hamstring today/tomorrow as I understand.

Should know more on his condition come Tuesday. #SuperRugby

Leicester, Saracens and Northampton: Friday’s two Premiership games were ones to forget for the Tigers and Sarries as they were both comprehensively outplayed by Sale Sharks and Wasps respectively. While they were depleted for those matches, the pair’s dismal performances left a lot to be desired, with the same being said of Northampton on Sunday. Saints were brushed aside by a rampant Exeter Chiefs as they suffered a third straight defeat in the Premiership, having lost to Bristol and London Irish in previous outings, as their slide continues.

Bulls: Speaking of three losses in a row and that’s also the case for the former Super Rugby champions as their late defeat at home to the Blues was another body blow to their early-season. Having already gone down to the Sharks and Stormers on the road, returning to the comforts of Loftus Versfeld was hoped to end their blues but Otere Black’s late penalty broke Pretorian hearts. This weekend they host the Jaguares who, despite having lost away to the Stormers last time out, should then be fully recovered from their long journey from Argentina.

Pau: After what was a good start to the season, which saw them reside in third position in the Top 14 standings after nine rounds, they have been abysmal over the past three months, losing seven matches in a row and falling to the bottom of the table. Pau were in the play-off hunt in November and were boosted by the additions of All Blacks pair Luke Whitelock and Ben Smith following the Rugby World Cup, but they have endured a torrid run of form and are in serious danger of going down. Although it is very tight in the lower reaches of the table, with five points separating 10th from 14th position, they need to snap this barren spell or else they could be cut adrift.