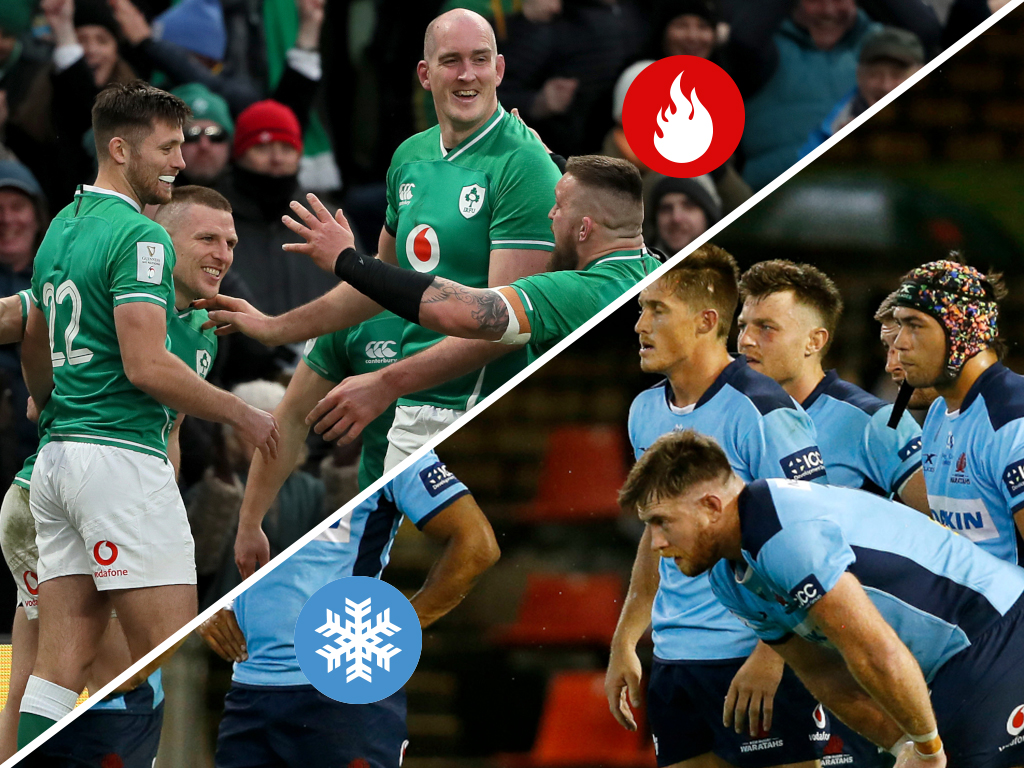 Ellis Genge: Twice in a week the loosehead prop has made a significant impact after coming off the bench. Against France, Genge brought intensity in both the loose and the set-piece, which gave England a glimmer of hope of claiming an unlikely win. On Saturday, the Leicester Tiger made a similar impression in the scrum and then scored the match-winning try late on. We also enjoyed his honest and blunt post-match interview as there aren’t enough personalities in the game at the moment.

'How's the atmosphere in the changing room?'

Ireland: A huge improvement from Andy Farrell’s men as they dominated Wales to secure their second successive win in the competition. Following a disappointing display against Scotland, which saw them scrape a 19-12 victory, the Irish ran in four tries to seal a 24-14 triumph over the defending champions. They showed more intent and creativity in attack in comparison to last week and are in a good position heading into their next game against England.

Chiefs: The men from Hamilton have made a fantastic start to the 2020 Super Rugby season and made a statement of intent with an impressive 25-15 victory over the Crusaders on Saturday. Despite a slow start, the Warren Gatland-coached team did not panic and showed plenty of character to fight back against the champions. The result means that the Chiefs become a bit of a bogey team for the champions as they are now victorious in two successive matches in this fixture after also notching a 40-27 win when these sides met in a Round 16 clash in Suva last year.

💰🏉 MONEY BALL from @brad_weber9 to Sean Wainui. How good?!

Mark Telea: The 23-year-old flyer made his debut for the Blues against the Chiefs at Eden Park last week and although he did not manage to cross the whitewash, he showed glimpses of his ability with a good attacking display. He delivered the goods this weekend, however, when he crossed for a hat-trick of tries as the Blues cruised to a 32-12 triumph over the Waratahs in Newcastle. After a low key performance in the opening half, Telea hit his straps after half-time as he scored all three his tries during that period.

Sharks: Another team who are yet to taste defeat in Super Rugby, the men from Durban delivered an outstanding performance as they secured a deserved 42-20 victory against the Highlanders in Dunedin on Friday. That result was a significant one for Sean Everitt’s charges as it means they have how beaten the Highlanders for the third time in a row. Although the entire Sharks team deserves credit, outside backs Aphelele Fassi and Makazole Mapimpi earn special praise as they looked dangerous on attack and score two tries each.

Stormers’ defence: They aren’t the most creative side but the South African outfit are evidently an incredibly stubborn team. Remarkably, John Dobson’s men are yet to concede a point in Super Rugby having shut out both the Hurricanes and Bulls. Against the former, they stunned the New Zealanders 27-0 and barely gave them a sniff before the Cape Town-based side were tested slightly more by their intra-country rivals. Pote Human’s charges had the Stormers under pressure at times in the second period but the hosts impressively held out for a 13-0 triumph.

The DHL @THESTORMERS claim their second victory at home. And again their opponents fail to score a single point. #STOvBUL pic.twitter.com/6BXzqloVcU

Waratahs and Rebels: Although it’s still early in the season, these two Australian sides are already on the back foot after suffering big defeats on successive weeks during the first two rounds of Super Rugby. After a heavy loss in their season opener against the Crusaders, the Waratahs were expected to put in a better display against the Blues in Newcastle but that did not happen and they lost by 20 points. The Rebels, meanwhile, were keen to bounce back from their unexpected loss to the Sunwolves in Round One but came off second best to the Brumbies, who beat them 39-26.

Saracens’ administrative blunder: It never rains but it pours as the saying goes and that could not be more apt for the Londoners at the moment. On Friday, it was revealed that Titi Lamositele was ineligible for their Champions Cup clash against Racing 92. The USA prop’s work permit expired the day before the game but Lamositele was named in the squad and came on to the field as Sarries claimed a 27-24 victory to secure a quarter-final place. They were reprieved somewhat after receiving just a €50,000 fine – €25,000 suspended – and duly remain in the competition, but it rather summed up their season. With the club being ousted from the Premiership Rugby Cup at the semi-final stage by Sale Sharks – coincidentally as that decision was being announced – it ended a pretty awful day for Saracens.

“Inadvertent administrative errors”, the bane of Saracens lives. €50k lighter after an ineligible Lamositele is fielded in the Champions Cup 🙈

Some Scotland supporters: Building an atmosphere and supporting your own team is great, while we also don’t particularly mind booing the kicker, but some of the actions of a minority of Scottish ‘fans’ were extremely poor on Saturday. In what is generally viewed as a family-orientated sport, you don’t want to see these obscene gestures. It is not the first time supporters have crossed the line either as two years ago England head coach Eddie Jones was abused on the train back from their 25-13 Calcutta Cup defeat.

Finn Russell’s and Gregor Townsend’s relationship: It always seemed as though there was more to the fly-half’s omission than just one incident and the Racing 92 player confirmed that in an interview in the Sunday Times. According to Russell, their relationship has been strained for some time, dating back to their days at Glasgow Warriors together, and neither side appears to be backing down. The 27-year-old also intimated that he will not feature for Scotland unless Townsend goes or there are significant changes within the set-up, which is a shame. The Scottish team, who have already lost their opening two Six Nations encounters, need him, while he is also a talent that enhances the game worldwide.

Big respect white chocolate,
Not many as honest and true to themselves like you brother..with you all the way.@finn_russell

Cold showers for the Wales women’s team: Cold as ice, indeed. For Wales’ women it was a nightmare day at Energia Park in Dublin as they slipped to a 31-12 defeat to Ireland on Sunday before things would get even worse in the changing rooms after full-time. After being drenched by a second-half hailstorm, a warm shower was just what the doctor ordered for both sets of players. However, Wales’ taps provided nothing but ice cold water with the Irish Rugby Football Union having since apologised for the “issue with the water heater” which, as you’d expect, means little to the shivering players who we now hope are feeling human again after feeling the full effects of Storm Ciara.

The IRFU have apologised to the @WelshRugbyUnion team for an issue with the water heater in their changing room today. Every effort was made to resolve the problem & extra amenities were provided.

The IRFU would like to thank the team for their understanding & apologise again.